Iraqi niello silver is growing in popularity at auction, particuarly thanks to the precise technique and purity of silver required to produce it. Our Head of Silver & Objects of Vertu, John Rogers, shares his knowledge of this distinct craft, ahead of our upcoming auction on 20 October. 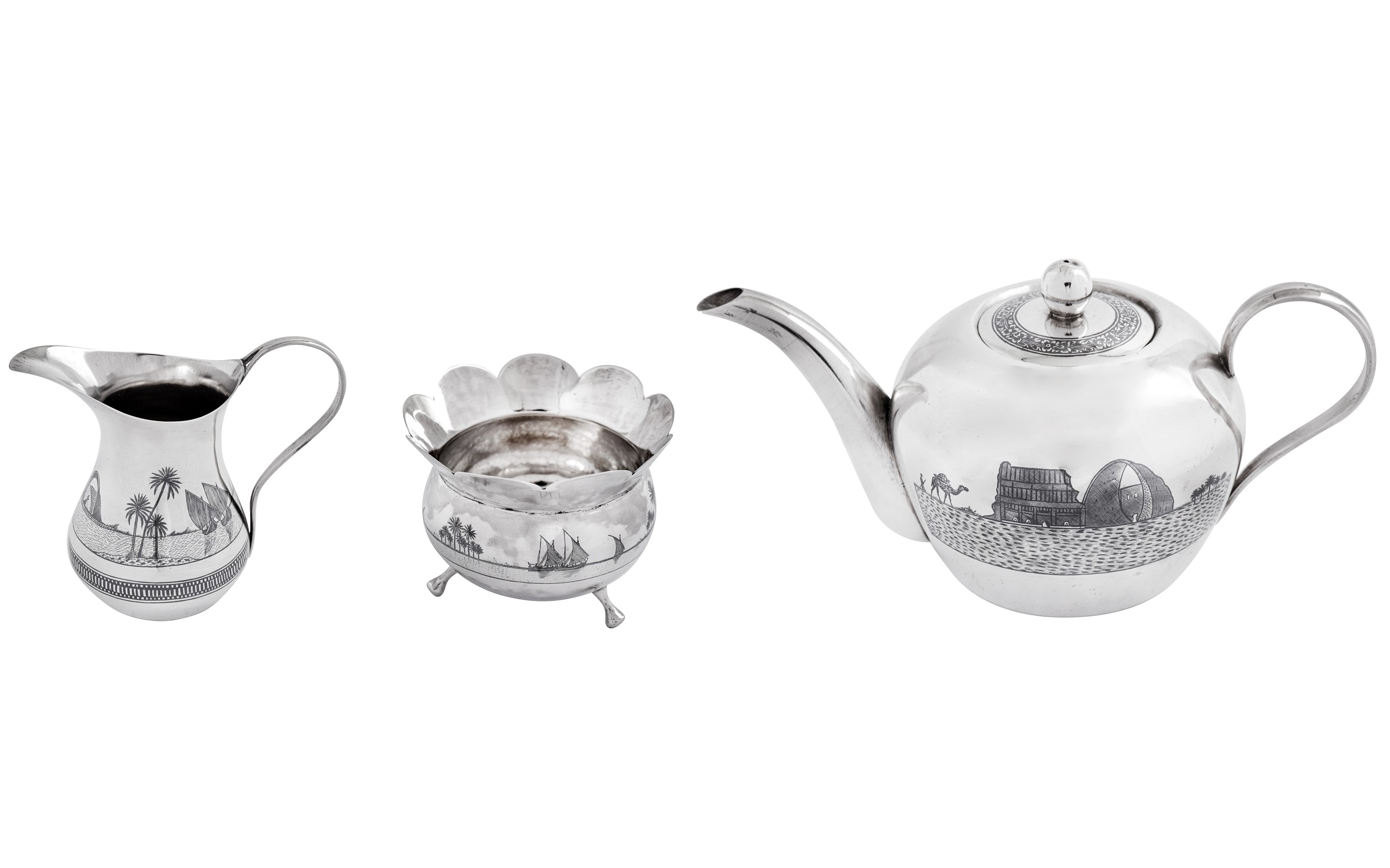 The silver of the Baghdadi Jewish community is quite uncommon, but the niello silver was extremely popular with tourists, army personnel and British ex-pats. A wide variety of items were made and are to be found across the globe, opening a viable collecting opportunity.

Previously this field has been largely ignored by auctioneers, often broadly described as Middle Eastern or erroneously as Egyptian, and termed white metal. The process of niello, an engraved design filled with a mixture of usually sulphur, copper, silver, and lead which is then highly polished, requires silver of a significant purity to execute this technique.

The two most common items to be found in Iraqi silver are napkin rings and cigarette cases, however there are also dressing table boxes, posy vases, cruets and, most prized of all, tea and coffee wares with trays. The niello decoration itself has a broad range of designs which often focus on famous Iraqi buildings such as the Tomb of Ezra or the Taq Kasra (Ruins of Ctesiphon).

In addition to famous buildings, there are also many traditional river scenes depicting boats of various kinds, including the gufa, a large or small circular coracle of basketwork, coated with bitumen that is specific to Iraq on the Tigris-Euphrates River system. Commonly there will also be camels, palm trees and occasionally boar or livestock.

Iraqi niello silver was not formerly marked - only on very rare occasions import marks from other countries may be found - so exact dating of pieces relies on known dated examples, which range between 1915 and 1970.

However, many examples of Iraqi niello silver were signed in Arabic using niello by the workshop(s) responsible for the pieces - unlike most silverware from many countries, including the Baghdadi Jewish silversmiths, which rely on a system of punches to identify the maker. There are many signatures to be found, some more clear and prominent than others and the most comprehensive list of these is published in History of Iraqi Silver (2017) by Mohammed Al Baghdadi.

The most famous and highly prized of these signatures are for Zahroon and Onaisi. The highly coveted name Zahroon operated in Omara like many of the niello makers, but later moved to Basra, while Onaisi became silversmith to the Royal family of Iraqi moving from Omara to Baghdad. There are instances of combinations of signatures demonstrating a collaborative working procedure, as well as rare examples of Marsh Arab work upon Jewish silver from Baghdad. Signatures are to be found of low-quality work through to masterpieces, and unsigned pieces can be of excellent workmanship themselves. 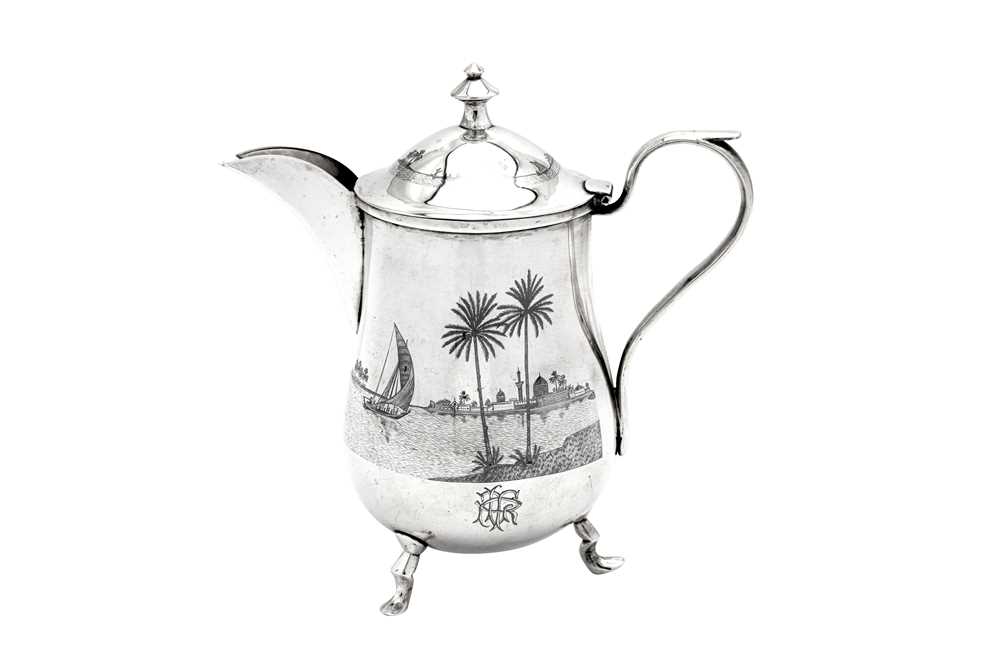 The prices for Iraqi niello silver has increased over the last ten years across all varieties, at an entry level price, napkin rings are the best option with the normal examples costing £15-30 each, whereas the rarer and more desirable stirrup shaped examples, if signed by Zahroon, at over £100 each.

Cigarette cases are another very approachable collecting opportunity for Iraqi silver, an unsigned example with basic niello work may cost between £100-150, and up to £500 for a more finely worked signed example with a distinct scene. The finest cases would be those nielloed with aircraft signed by Zahroon which would cost in excess of £2000.

The very best pieces of Iraqi niello silver are those with custom order niello scenes, not found on usual examples ranging from specific ships, aircraft, maps and even English cottages. Tea and coffee ware, especially those signed by major names, will draw considerable attention, a normal three-piece tea set is currently around £1000 at auction, better yet is when the provenance of the item is nielloed upon it with a dated inscription to a known person.

The field of Iraqi nielloware will no doubt grow further as awareness of the signatures and the range in quality of niello work becomes better known. Nielloware from other countries outside of Russia - which has long been the world’s major centre for niello work - is also gaining further appreciation, such as that made in the Van region of Armenia, Tabriz in Northern Iran and from Nakhon Sri Thammarat in Thailand.

Much like the development of Chinese and Indian silver in the late 20th century, the more that texts circulate raising the profile of a collecting field, significant examples are more likely to enter the marketplace.

In all eventualities the future looks rather bright for Iraqi niello as an evocative and distinct craft.