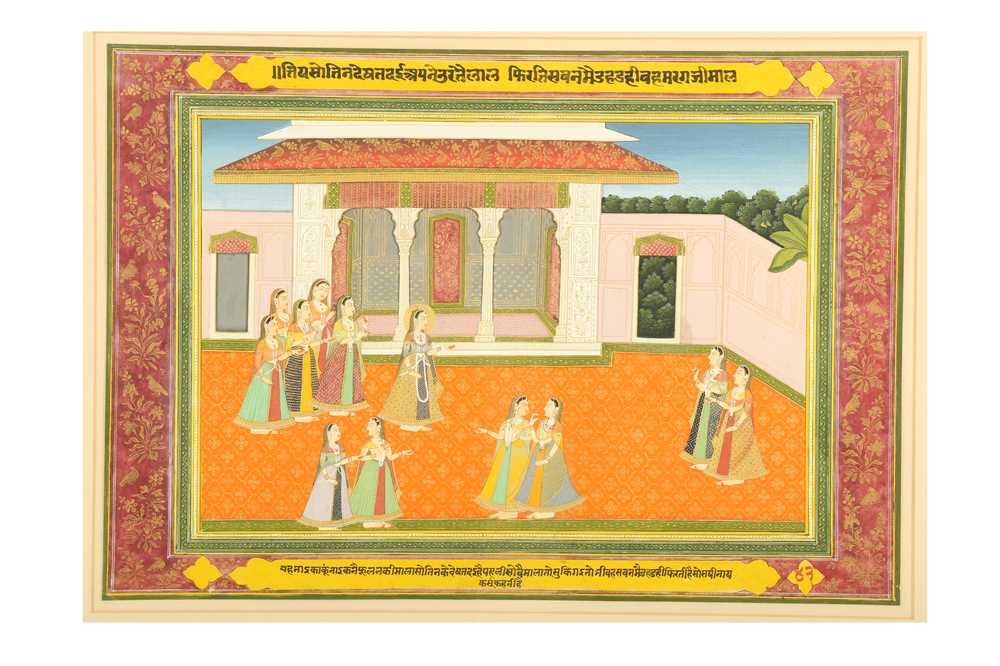 AN ILLUSTRATION FROM A KRISHNA LILA SERIES: THE NAYIKA AND HER FEMALE ATTENDANTS
PROPERTY FROM A PRIVATE GERMAN COLLECTION
Jaipur, Rajasthan, North-Western India, ca. 1820 - 1840

Opaque pigments heightened with gold on paper, the horizontal composition depicting a scene from a Krishna Lila series, marked as number 43 in the cusped yellow cartouche on the lower-right corner, the yellow epigraphic cartouche at the top filled with poetic love couplets of black ink Braj Bhasha dialect, the one at the bottom filled with an explanation of the above couplets in Rajasthani dialect, mounted on cardboard, glazed and framed, 27.4cm x 39.5cm excluding the frame.

This illustration is the immediate sequel to the previous lot, Enthroned Krishna Reunited with the Nayika, and it comes from the same early 19th-century Rajasthani Krishna Lila series. The nayika is shown in a courtyard inside her palace, immediately after the reunion with her beloved. She looks inquisitive, as if she's seeking advice from her attendants and waiting for their answers.

Excitement is in the air: the nayika is surrounded by different groups of female attendants, all absorbed in their conversations, lively gesticulating and looking in different directions. Most of them are depicted in profile; only one, behind the heroine, is shown in three-quarter view. Both her eyes and subtle smile convey a sense of delight and confidential comradery, almost suggesting approval and unquestioned support whatever action her lady undertakes. The scene delivers a lively feeling of excitement and of meaningful reflection at the same time, as if the readers and beholders needed some time to mull over the latest events.