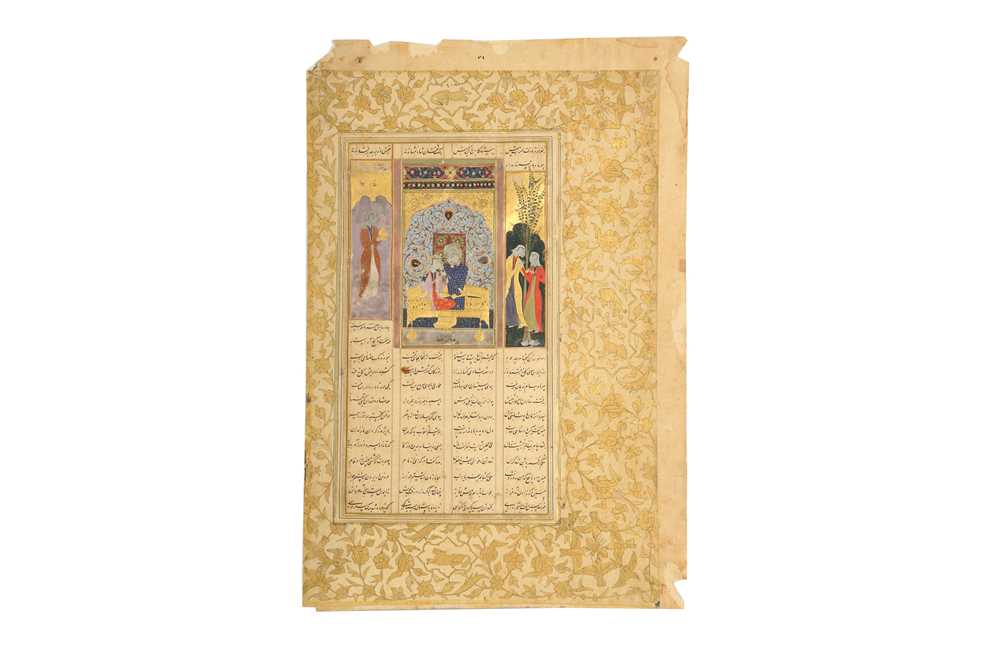 AN ILLUSTRATED LOOSE FOLIO FROM A SHAHNAMA: MEHRAB AND HIS WIFE SINDOKHT ON A THRONE
PROPERTY FROM A PRIVATE AMERICAN COLLECTION
Possibly Qazvin or Shiraz, Iran, second half 16th century

Persian manuscript on gold-sprinkled paper, with 12 - 14ll. of crisp black ink nasta'liq script to the page, the text accompanied by three rectangular illustrated cartouches, the central one with Mehrab Kaboli and his wife Sindokht caught in a tender embrace, drinking from an encrusted gold cup, seated on a gold throne, in front of them trays with fruits and encrusted ewers, the background with a lobed arch filled with 15th-century Timurid Herati decorative influences such as scrolling cloudbands amidst interlocking split palmette sprays, the spandrels with stylised lotus flower sprays and rosettes with pseudo-saz leaves reminiscent of Shah Quli's painting style, at the top two bands of polychrome floral borders, the lateral extensions of the main illustration with female attendants, either in animated conversation overseen by a pair of magpies or bringing further drinks to the couple with ducks flying high in the golden sky, mounted within an album border (muraqqa') finely illuminated with scrolling floral sprays amidst roundels of birds and cusped cartouches filled with hares and foxes, in the same style of borders in the Mughal Farhang-i Jahangiri (Persian-language dictionary) compiled by Jamal al-Din Husayn Inju Shirazi (d. 1035 AH / 1625-1626 AD), the recto with up to 25ll. of black ink nasta'liq script to the page, with a heading in red ink, set within thin green, gold and blue rules, with an old inventory sticker of the early 20th-century Iranian-American collector Mirza Raffy, the text panel 24cm x 13cm, the folio 37cm x 24.5cm.

The figural mannerism of this illustration, with its distorted, slender and languidly contorted characters, is reminiscent of the late 16th-century Safavid Qazvin style. Indeed, one of the hallmarks of this pictorial production is the presence of figures with slender, long-waisted bodies with wide heads, very large almond-shaped eyes and thick eyebrows, and a silhouette with sharply bent knees and elbows (Eleanor Sims, Peerless Images: Persian Painting and Its Sources, 2002, p. 68). The exaggeration in the figural style is usually complemented with extravagant settings, with golden skies, eerie landscapes with gibbous purple rock formations, and crowded palace-pavilion scenes with dense patterns and convoluted decorations. These elements of "refined chaos", as once described by Stchoukine, seem to be ruling the illustrations on this folio, supporting a second half of 16th-century dating.

The one-sided illuminated border showcases decorative motifs typical of album borders dating to the late 16th - 17th centuries. The inspiration for the specific patterns on this border stems from the Persian dictionary known as Farhang-i Jahangiri, commissioned to Jamal al-Din Husayn Inju Shirazi by the Mughal Emperor Akbar. The lexicon was completed only after his death and presented to his successor, the Mughal Emperor Jahangir in 1608, who lent his name. The golden interlocking vegetal sprays and animal decorations, finely outlined in black ink, can be compared to a group of borders with an analogous attribution at The Cleveland Museum of Art (inv. no. 2013.318), albeit these are two-sided rather than one-sided. Several folios with Farhang-i Jahangiri borders have been successfully sold at auction in recent years, including Sotheby's London, 24 October 2018, lot 90; and Christie's London, 25 June 2020, lot 81.

We would like to thank Eleanor Sims for her assistance and advice with this lot.