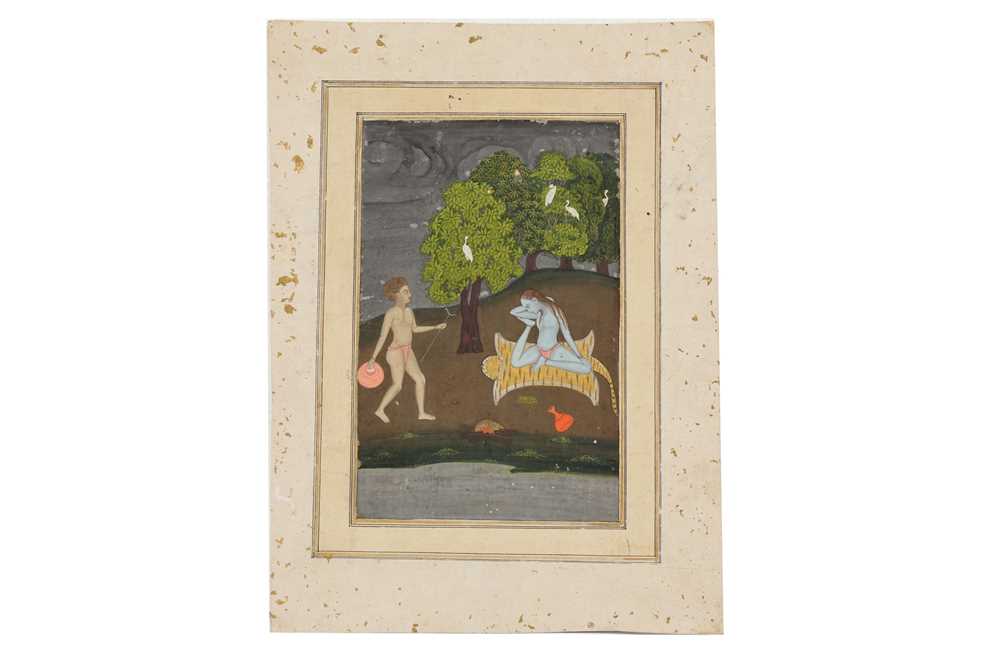 Opaque pigments heightened with gold and silver on paper, the vertical composition depicting an ascetic, blue-skinned yogini approached by a male disciple holding a Sufi crutch in one hand and a pink turban in the latter, the meditating yogini seated on a tiger skin, in front of her a fire and her simple possessions (a green bowl and a red bottle), birds animating the trees in the foreground under a dark night sky, within golden and black rules, pasted onto cream cardboard with golden specks, 26cm x 19cm including the borders.

Provenance: Artcurial Paris, The Collection of Francoise and Claude Bourelier, 12 May 2015, lot 296.

The distinctive style of Awadhi painting has often been described as a fertile hybrid between European cultural influences, imperial Mughal models and indigenous traditions. The late-Mughal history of Awadh was paralleled in other provinces where painting schools, which were at first dependent upon the Mughal idiom, went on to develop their own distinctive styles (Tushara Bindu Gude, in India's Fabled City: The Art of Courtly Lucknow, 2011, pp. 71 - 78). As an example, Awadhi outdoor scenes attempt to combine the formal requirements of Mughal courtly portraiture with the desire for naturalism, with lush landscapes that often embrace the characters and recede through the middle and upper parts of the pictures, suggesting thus wider and larger spaces, as in the case of our lot.

The nocturnal setting is yet another element exemplifying one of the quintessential characteristics of late 18th-century Awadh compositions. Already appreciated at the Delhi court, night scenes seem to pervade Lucknow and Faizabad paintings, especially with female subjects. The hours of the night offered such a visually stimulating chromatic contrast, and the Awadh painters successfully rendered this antithesis by mixing very bright garments, skin colour and accessories in the fore and middle ground to sombre, darker horizons in the background.

The subject of this painting further supports an attribution to the Awadh pictorial tradition. Indeed, as Polier's album and Johnson's studio production showcase, sadhus, hermits and ascetics were predilect subjects, both to illustrate Ragamala series, like the Bhairava Raga, and realistic scenes, which though perhaps common in India would have certainly mesmerised and bedazzled the Western beholders back in Europe (Malini Roy, in India's Fabled City: The Art of Courtly Lucknow, 2011, pp. 176 - 183).