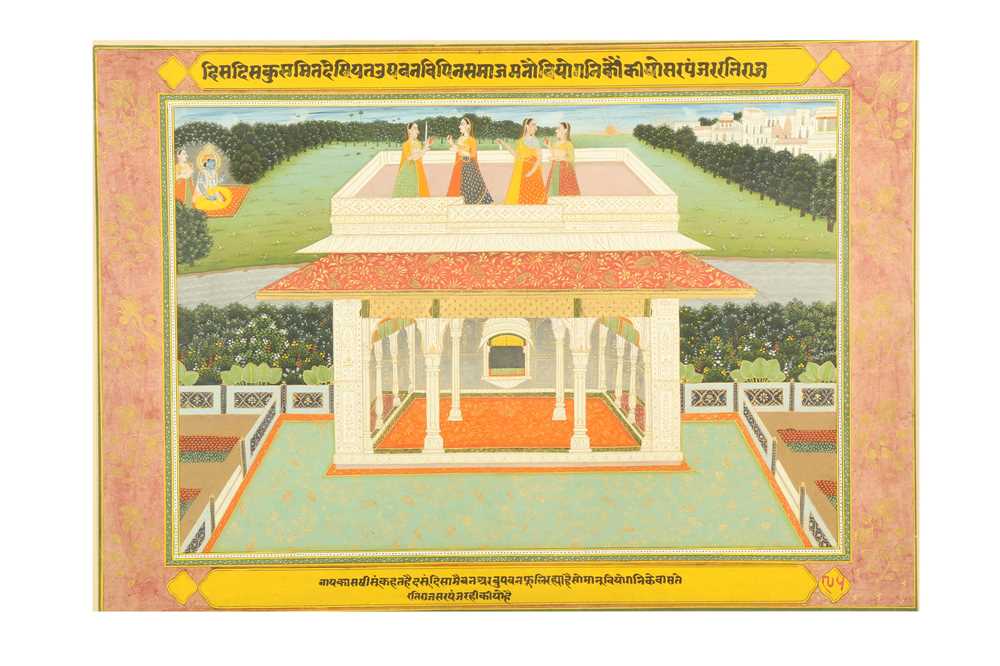 AN ILLUSTRATION FROM A KRISHNA LILA SERIES: KRISHNA PINING OVER HIS LOVER AT SUNSET
PROPERTY FROM A PRIVATE GERMAN COLLECTION
Jaipur, Rajasthan, North-Western India, ca. 1820 - 1840

Opaque pigments heightened with gold on paper, the horizontal composition depicting a scene from a Krishna Lila series, marked as number 25 in the cusped yellow cartouche on the lower-right corner, the yellow epigraphic cartouche at the top filled with poetic love couplets of black ink Braj Bhasha dialect, the one at the bottom filled with an explanation of the above couplets in Rajasthani dialect, mounted on cardboard, glazed and framed, 27cm x 39cm excluding the frame.

This illustration comes from the same collection and early 19th-century Rajasthani Krishna Lila series already presented in our last sale, 16 April 2021. In this scene, Krishna is portrayed seated cross-legged on a gold-embroidered orange floor spread; wearing an orange turban; smelling a white flower, whilst admiring the sun setting on the distant horizon. The four female attendants on the pavilion's roof appear to be discussing the scene: some are pointing at Krishna and others are proceeding with their daily tasks, giving directions to the others to do the same. The scene conveys a very tranquil and almost meditative feeling, changing the tone after the intense charge and sensual tension encountered in the previous lot.