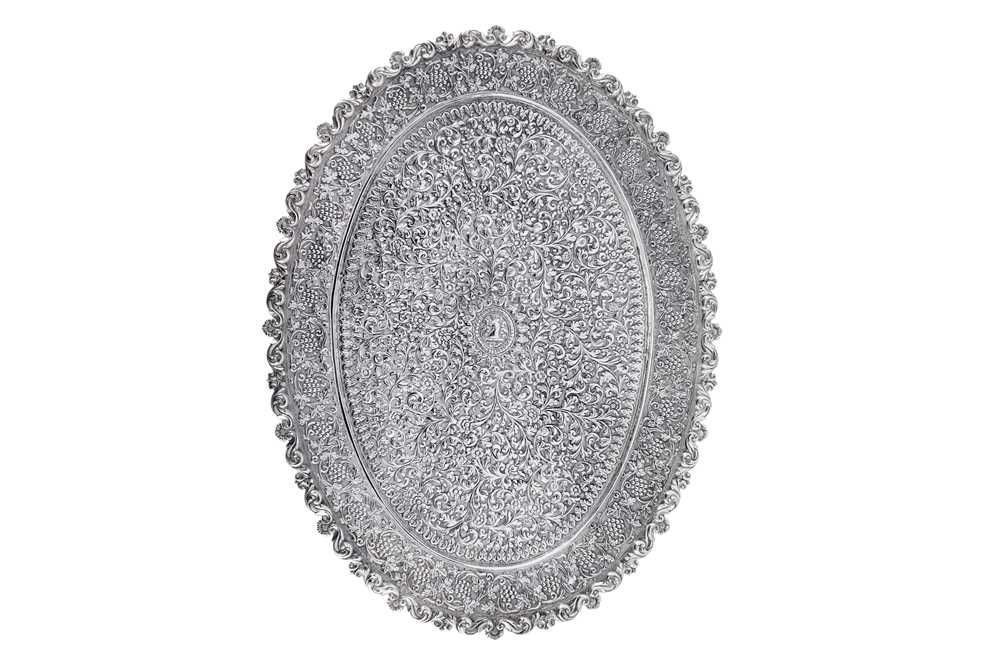 Raj period, of oval form with shaped chased rim of foliate scrolls, all raised upon four ball feet. The centre embossed with a crest of a cock’s head couped, within a gadrooned oval cartouche. The field finely chased with foliate scrolls rosettes against a textured ground, the edge chased with trailing fruiting vine. Marked to the reverse centre OM only.

The crest is for Ready

for Lieutenant Colonel John Tobin Ready (b.1837) son of Maj Gen John Ready (1777-1845), Lieutenant Governor of the Isle of Man and Susanna Bromley, married 18th June 1804. Ready joined the 66th Regiment as an officer in 1854 and was in the 66th Regiment, Commander 2nd Battalion, the Royal Berkshire Regiment between 1883–1887, upon which date he retired, he served at Maiwand.

The regiment was sent to India in March 1857 to help suppress the Indian Rebellion. It returned to England in March 1865 but went back to India in February 1870. The regiment was deployed to Afghanistan in early 1880 and took part in the Battle of Maiwand in July 1880 where the British forces were routed and most of the regiment was caught up in the rout. Some 140 of them made a stand at the Mundabad Ravine, which ran along the south side of the battlefield, but were forced back with heavy losses. Eventually 56 survivors made it to the shelter of a walled garden and made a further stand. Eventually the 56 were whittled down to only 11 men—two officers and nine other ranks.

A tray by Mawji of shaped oval form circa 1875 from the Paul Walter Collection with the same fruiting vine border is illustrated in Wilkinson, W., (1999)., Indian Silver 1858-1947: Decorative Silver from the Indian Sub-Continent and Burma Made by Local Craftsmen in Western Forms. London, Wynyard R T Wilkinson, p. 81, fig. 113, where the author notes "[t]he vine border on this tray is typical of earlier Cutch silverwork."