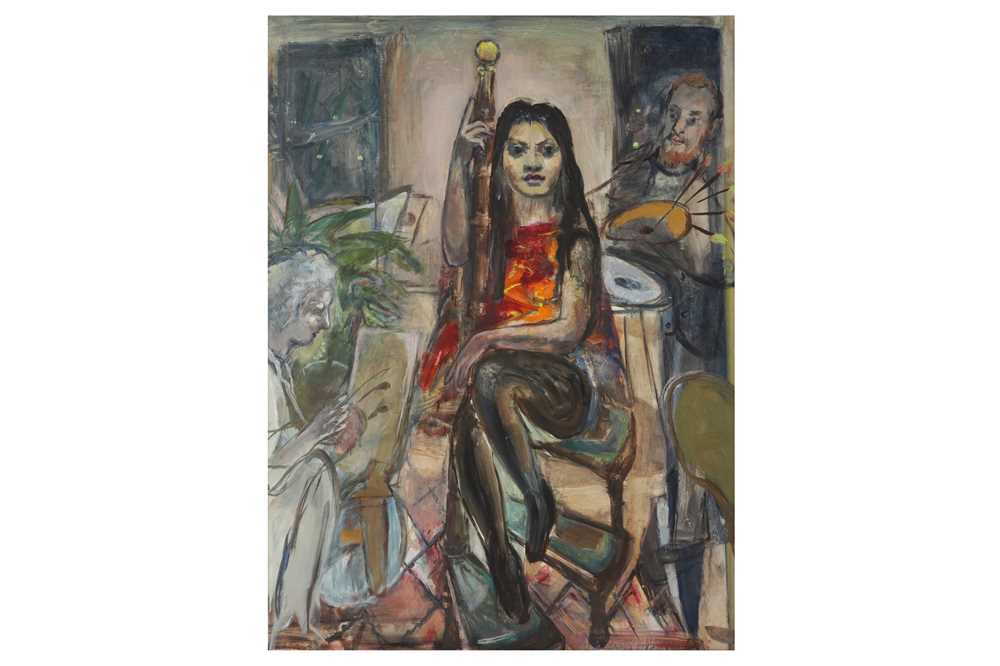 Painted in 1968, the central figure in the present work was Lorette Lugten. A Dutch-Indonesian, born in Batavia (now Jakarta) in 1944 she lived in London from 1967-70. As Schlenker recounts, Marie-Louise met Lorette in a chance encounter while window-shopping in Hampstead, no doubt attracted to her striking looks and mane of black hair. In an interview in 2001 Lorette recalled how Marie-Louise had struck up a conversation which led to her becoming a paid model, and sitting for the artist in her studio once a week.

In the centre of the present composition Lorette sits elevated on a set of library steps. Top right a male artist appears in a half-open door with brushes and a palette in hand. Lower left crouches the slightly diminutive form of Marie Louise, intent on capturing the symmetry of Lorette's features, her distinctive large dark eyes and eyebrows, full lips and strong nose. Marie-Louise did several drawings of Lorette (Schlenker figs. 179 & 180), and a second painting. Lorette's own intention was to become a painter herself, and in the half-length portrait of the same year Marie-Louise depicted Lorette as a fellow artist, with a brush in her right hand and a palette in her left (Schlenker no. 220).