We are looking forward to a fantastic Urban & Contemporary Art sale next week, which boasts a collection of pieces by big names such as Banksy, Andy Warhol, Jean-Michel Basquiat, Invader and Anselm Reyle. Head of Department Penelope Sonder talks us through some highlights from the sale, the provenance and culture significance in the art world and more broadly in society, as well as the ever growing cross-over scene between urban and contemporary art. 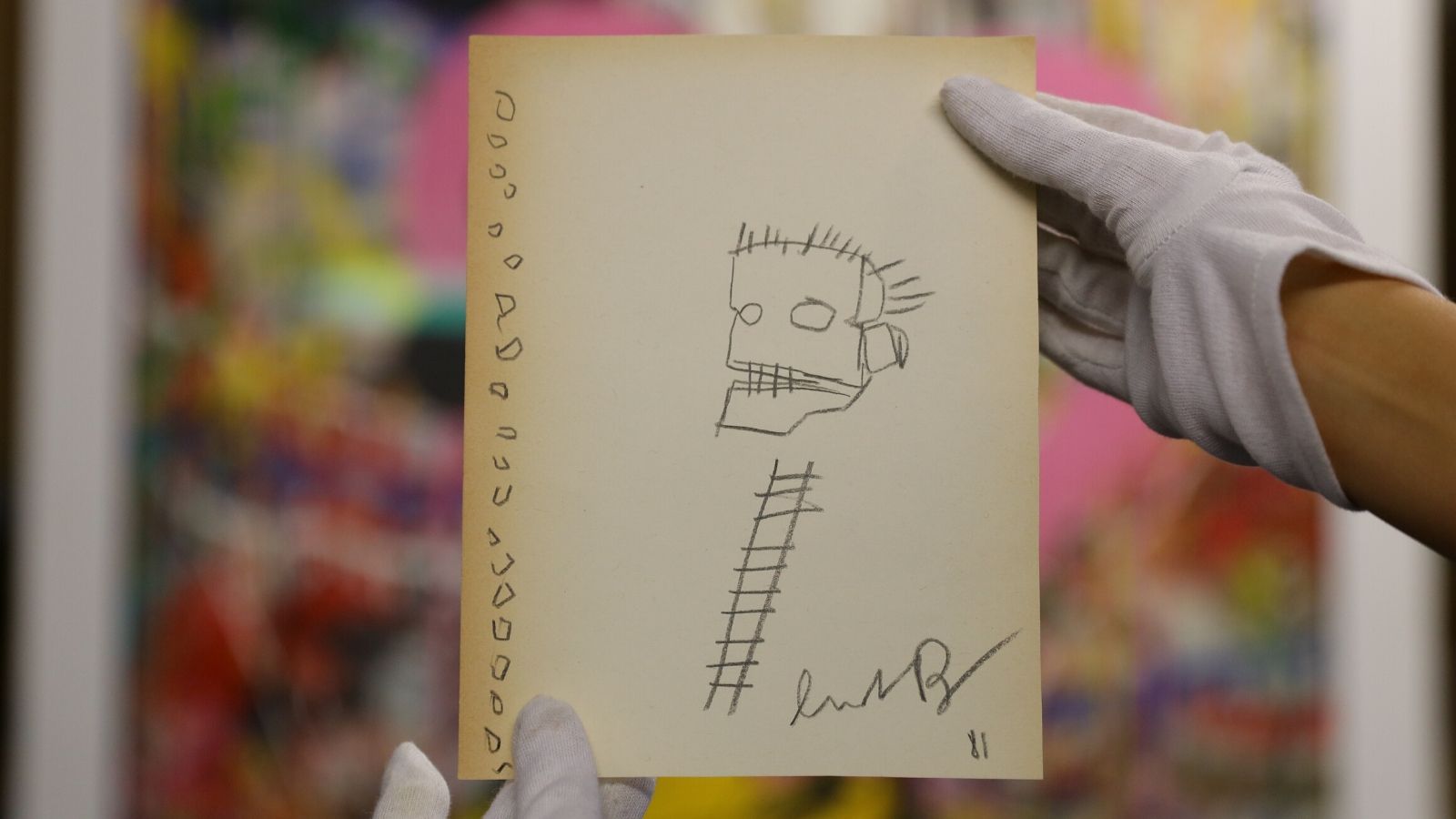 This original drawing by Jean-Michel Basquiat has found its way to Chiswick Auctions with a very interesting provenance. The Italian art collector Urbano Quinto, who met Jean-Michel Basquiat at the Andy Warhol Factory at 33 Union Square West in New York City, collected drawings from Basquiat, Keith Haring and Andy Warhol, and other artists from these famous circles directly from their studios.

Urbano Quinto visited Jean-Michel Basquiat at his Great Jones Street studio in 1981. This drawing is one of several that stem from this meeting, originally a page from Urbano Quinto’s sketch book, signed and dated by the artist.

'Untitled (Ladder Head)' will feature in next week’s sale. 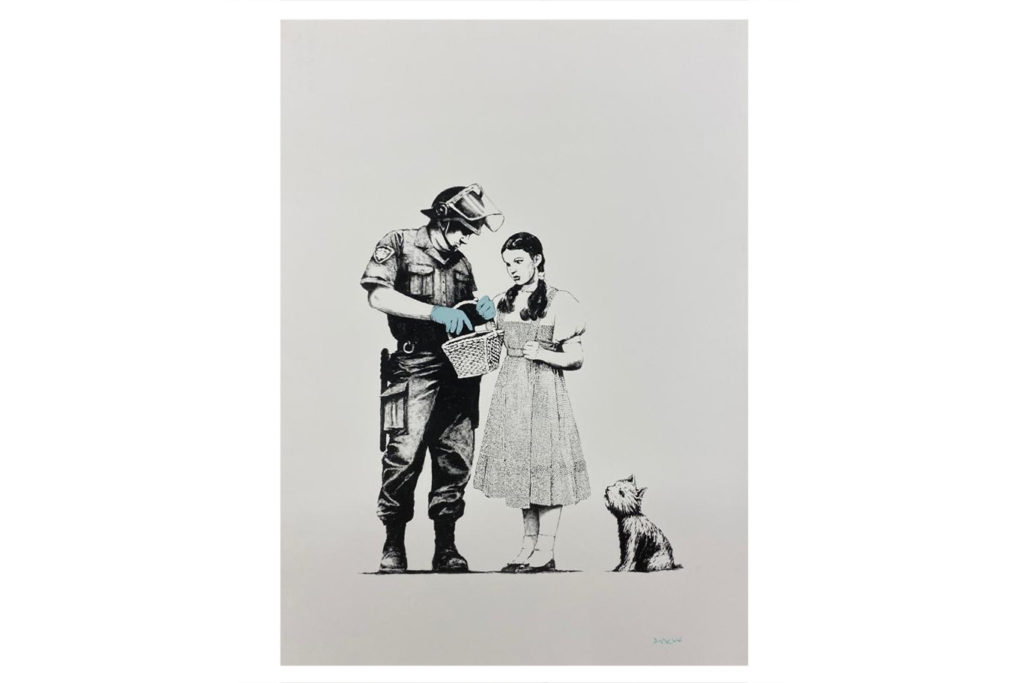 The market for Banksy continues to be very buoyant. Audiences still marvelling at his playful stunts including his fake cave painting which he disguised in the British Museum and which remained unseen for two days, and ‘Love is in the Bin’ which was shredded in front of the onlookers at Sotheby’s last year.His prints are very sought after, including this piece entitled ‘Stop and Search’ featuring Dorothy, the protagonist from the famous book and film ‘The Wizard of Oz’ is a perfect example of Banksy’s wry humour. Here, Banksy depicts Dorothy having her wicker basket searched by a uniformed police officer which is a clever commentary on the controversial stop and search legislation first introduced by the UK government in the 1980s and which was recently demonised for its unfair targeting of ethnic minorities.

This Tier 1 sought-after print was released in 2007 as a limited edition of 500, all numbered and signed in blue crayon. This image forms an important part of Banksy’s anti-establishment practice. Unlike many of his prints, Stop and Search was never painted on canvas. 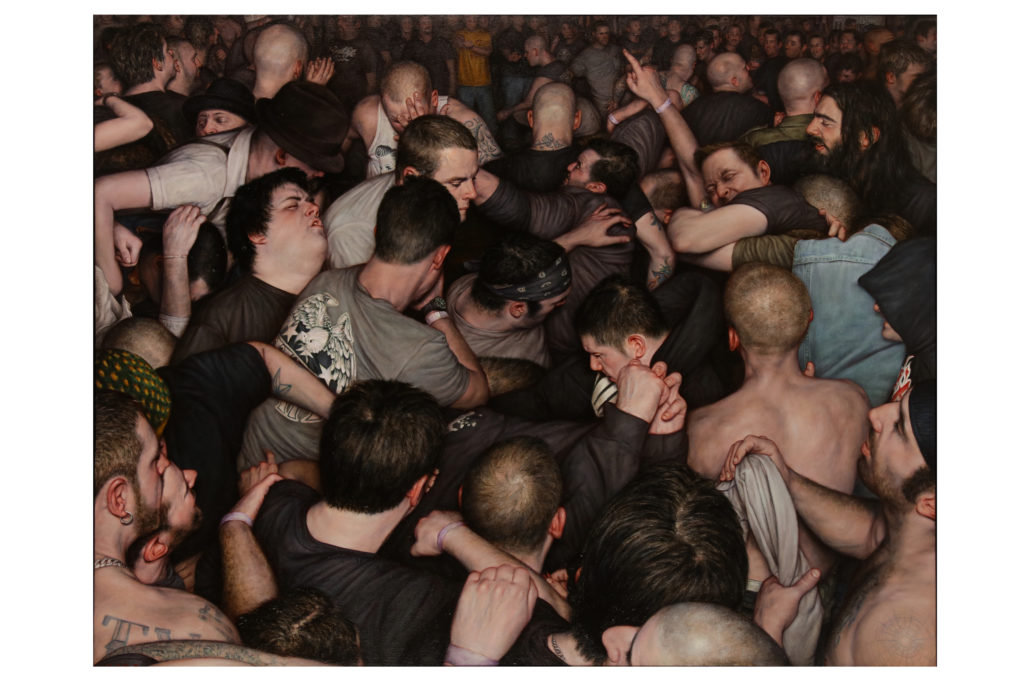 Dan Witz has had one of the most sustained careers of any street artist. He is perhaps known best for his witty trompe l’oeil stickers and silkscreen paste-up posters. In recent years Witz has turned to painting, mining the city of New York for inspiration and combining traditional and digital tools in his intensive processes. He begins with digital photographs, edits them in Photoshop, and prints the images onto canvas as achromatic underpaintings. In a similar way to the Dutch masters, Witz then applies colour with traditional glazing techniques, allowing him to create illusions of depth, form, light, and shadow, as in this Mosh Pit Scene in Free For All, for which he drew on his experiences as a musician in the 1980s for subject matter.

Another anonymous London Street Artist that has risen to fame, after sleeping rough on London streets for a decade is the artist, STIK who can be easily recognised by his stick men murals. He has been commissioned by the British Arts Council, worked with Amnesty International, sells his works in auction houses for Homelessness charities, and paints murals all over the world.

STIK’s new auction record has been achieved at Christie’s Prints & Multiples sale in September 2019 for a variation of the Liberty set. Lot 401 of our 21st January Urban & Contemporary Art sale, a larger print set in a smaller edition, for £160,000 Hammer.

STIK is known for releasing prints in collaboration with magazines and creative agencies examples include the ‘Don’t Panic’ Deep print release and the Big Issue series print release. Signed versions of these magazine prints have been gaining in value of up to 150% faster than traditional print releases and is a print release model to watch for young collectors. 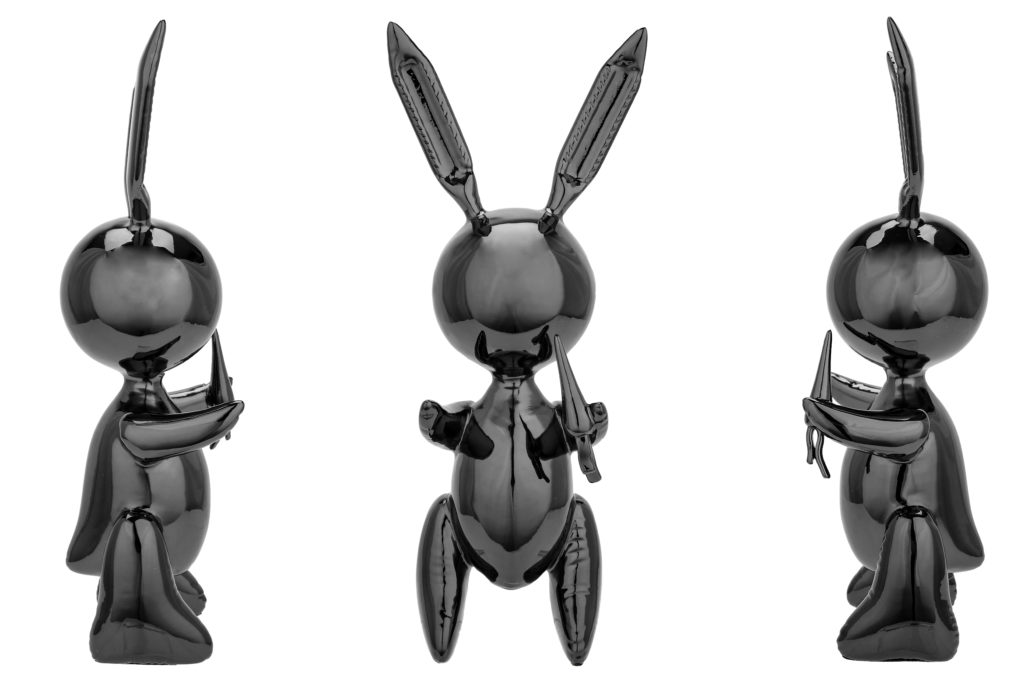 American contemporary artist ‘Jeff Koons’ has turned himself into a super-brand of the 21st century, following the method of turning an artist into a profitable brand as adapted by Andy Warhol.

This is not where the similarities between these two artists end – Koons is known to make popular culture the main subject of his oeuvre, the most popular example of this being his balloon animal sculptures.

One of these balloon sculptures, the original Rabbit, has hit an auction record of $91m at Christie’s New York. A month following this record for a living artist, one of these edition 500 replicas of the sculpture, produced by Editions Studio, sold for $5000 at auction. It will be interesting to see how this ‘Black Rabbit’ does next Tuesday. 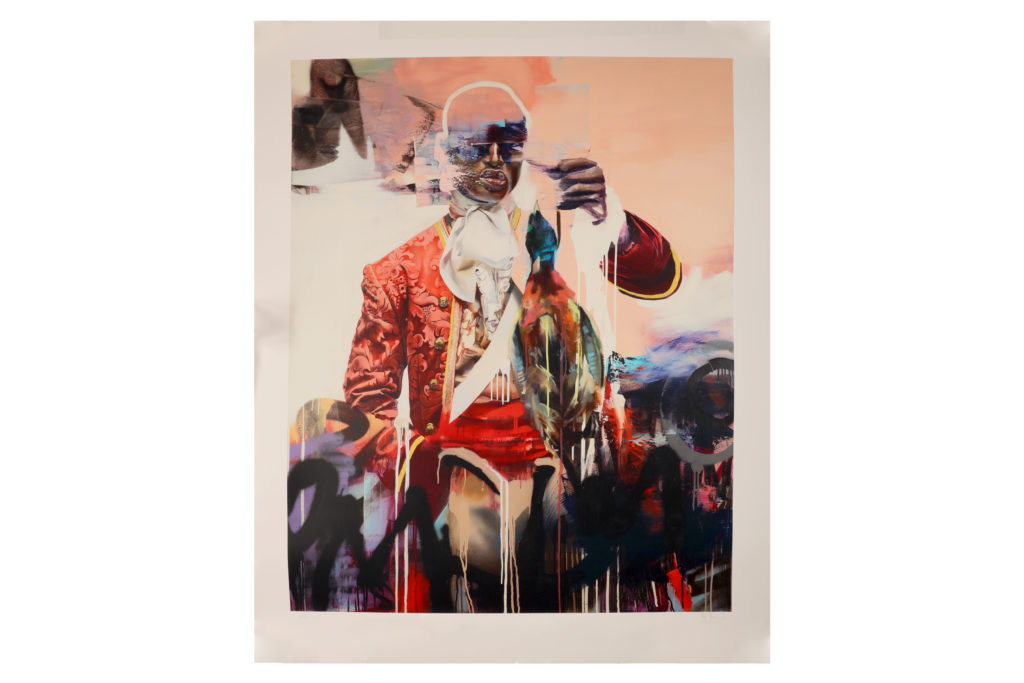 Irish urban contemporary artist Conor Harrington is one of the most popular artists in the street & urban art community. Starting off as a graffiti artist, Conor has developed his own style stretching from graffiti to fine art.

Thematically, Conor is debating the conflict of masculinity in urban culture and the crisis of gender expectations. Stylistically, he has successfully combined the elements, media and techniques of street art with colours, imagery and style of fine art painting with a focus on the renaissance era.

Modern Monarchy is one of his most sought-after prints which was released alongside his famous Dead Meat exhibition at Lazarides Gallery in London in 2012. 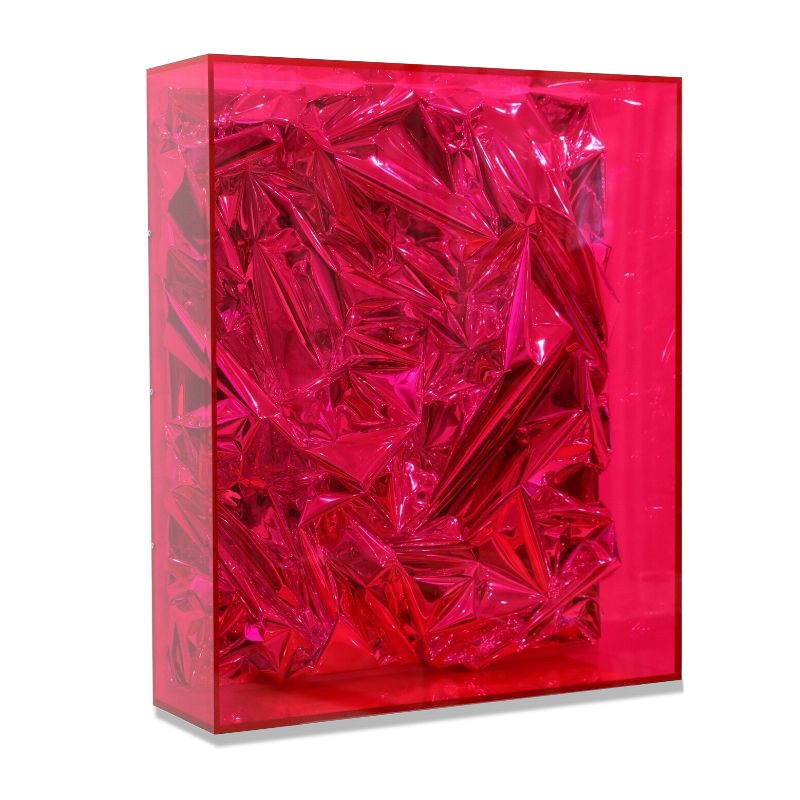 One of Anselm Reyle’s best known work series are his “foil paintings,” and are highly celebrated abstract works. They encourage an element of sensory deprivation as the observer is restricted by the perspective box from touching the inviting tactile silver foil inside. Reyle also cleverly plays with the fragility of the foil and the rigid geometry of its form. The reflective nature of the foil means the aesthetic of the piece is constantly changing depending on its environment.

Lot 891 is an exceptional original example of the foil painting series which will feature in our upcoming sale. 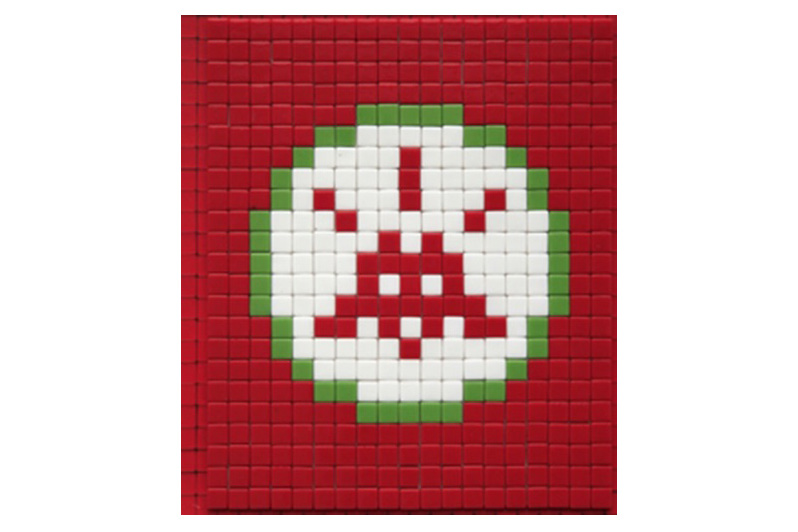 French street artist Invader is a collectors’ favourite and became famous with his ceramic tile mosaics, often depicting figures from the 1970’s & 80’s 8-bit video game Space Invaders, which he has placed in 65 cities in 33 countries (and counting).

One high score is beating the next in short turnovers for Invaders at the moment, with his tile work of Tk_119 of Astro Boy realising a new record of $1.2m USD Hammer holding the new record in November 2019.

Invaderoma is a collectable guide to Space Invader in Rome, a limited-edition book of 60 signed and numbered by the artist with an actual invader tile mosaic on the cover.

Italian artist duo Miaz Brothers are another favourite in the interesting cross-over scene between urban and contemporary art. Roberto and Renato Miaz both studied fine art and have developed a distinct new style of portraiture that lies between an anonymous, out-of-focus aesthetic that annihilates detail paired with baroque colour palettes and shapes.

As they put it themselves, “This painting research began when we decided to look for an alternative pictorial language, which had a visual synthesis of philosophical insights. We have focused on the concepts of appearance-disappearance […] a "sub-atomic" essence without boundary lines, a flowing being, evolving. a representation of the essence of being, elusive of any definition.” -Miaz Brothers.

We have three beautiful works by the Miaz Brothers coming up in sale next week and due to their popularity, we expect the paintings to do very well.

For more information on any of the works mentioned above please contact Head of Urban & Contemporary Art, Penelope Sonder.