Urban & Contemporary Art as an Investment

Although there has always been money poured into art, art has become considered as an investment asset by individuals from far more diverse socio-economic backgrounds.  An influential event in this evolution was the Scull sale in 1973.  On October 18th of that year, it was the first time a major auction house had sold just one seller’s items, when Sotheby’s, New York hosted the Scull sale.  Robert Scull, a businessman, and his wife Ethel had carefully built a collection over the years.  They were advised and assisted by art dealer Leo Castelli.  They bought little known but respected artists such as Robert Rauschenberg, Jasper Johns, James Rosenquist and Andy Warhol.  On the night of the auction, many new auction records were set for the artists that were on offer.  Robert Rauschenberg’s ‘Thaw’ was sold to the Sculls some years earlier for $900, it went on to sell for $85,000 at Sotheby’s.  This yielded a spectacular 8847% return on investment.  This works out as 884% return per year and over twenty years it was 442% return per year.  Until this auction, the art market was a far more exclusive domain for people of substantial means, this sale changed that.  The Scull’s gave birth to the modern art collector and set the tone for the new millennium of the modern art world and the $56 billion industry we see today.

In the last two decades, investing in art has increasingly been considered an alternative asset-based investment. This is testified by the vast number of reports that have been published on the subject in recent years.  The validity of art as a tool for investment accelerated in 2004, as is highlighted by Adriano Picinati di Torcello (Deloitte Luxembourg’s Advisory and Consulting Director), ‘The interest in this alternative market was fuelled by academic publications analysing art as an investment’.  He also highlights the launch of the first Fine Art Fund in 2004 as an important factor in propelling forward the general acceptance of art as an investment.

The launch of the £214 million Fine Art Fund was the first investment vehicle that operated on a scale comparable to that undertaken by the British Rail Pension Fund nearly 30 years before.  In 1974 the British Rail Pension Fund decided to invest in art, devoting some £40 million, or about 3 percent of its holdings at the time, to the venture. They engaged with Sotheby’s, which offered “free” advice on the condition that any sales from British Rail’s portfolio would pass through Sotheby’s. The significance of the British Rail experiment, the success of which remains debatable, was that it was the first very large-scale and systematic attempt to treat art as an investment vehicle.

The boom of the art investment market in the early 2000s can been further seen by the globalisation of the art market and exemplified by the fact that in 2003, Sotheby’s biggest buyers came from 36 countries.  Four years later, they were spread over 58 countries and their total number had tripled.

However, as with most investment vehicles, the boat was significantly rocked by the 2008-9 global financial crisis.  While the art fund industry was revived to an extent, peaking in 2012 with Assets Under Management (AUM) of $2.3 billion, it then slowed.  In 2015 AUM in this sector had halved to just $1.2 billion.  Although, private funds seem to have grown.

There is certainly the chance of making extraordinary profits on art, at a time when other investments have offered poor or non-existent returns, particularly since this financial crisis of 2008-9.   For instance, Jean-Michel Basquiat’s Untitled (1982) which went from $19,000 in 1984 to $110.5 million in 2017. 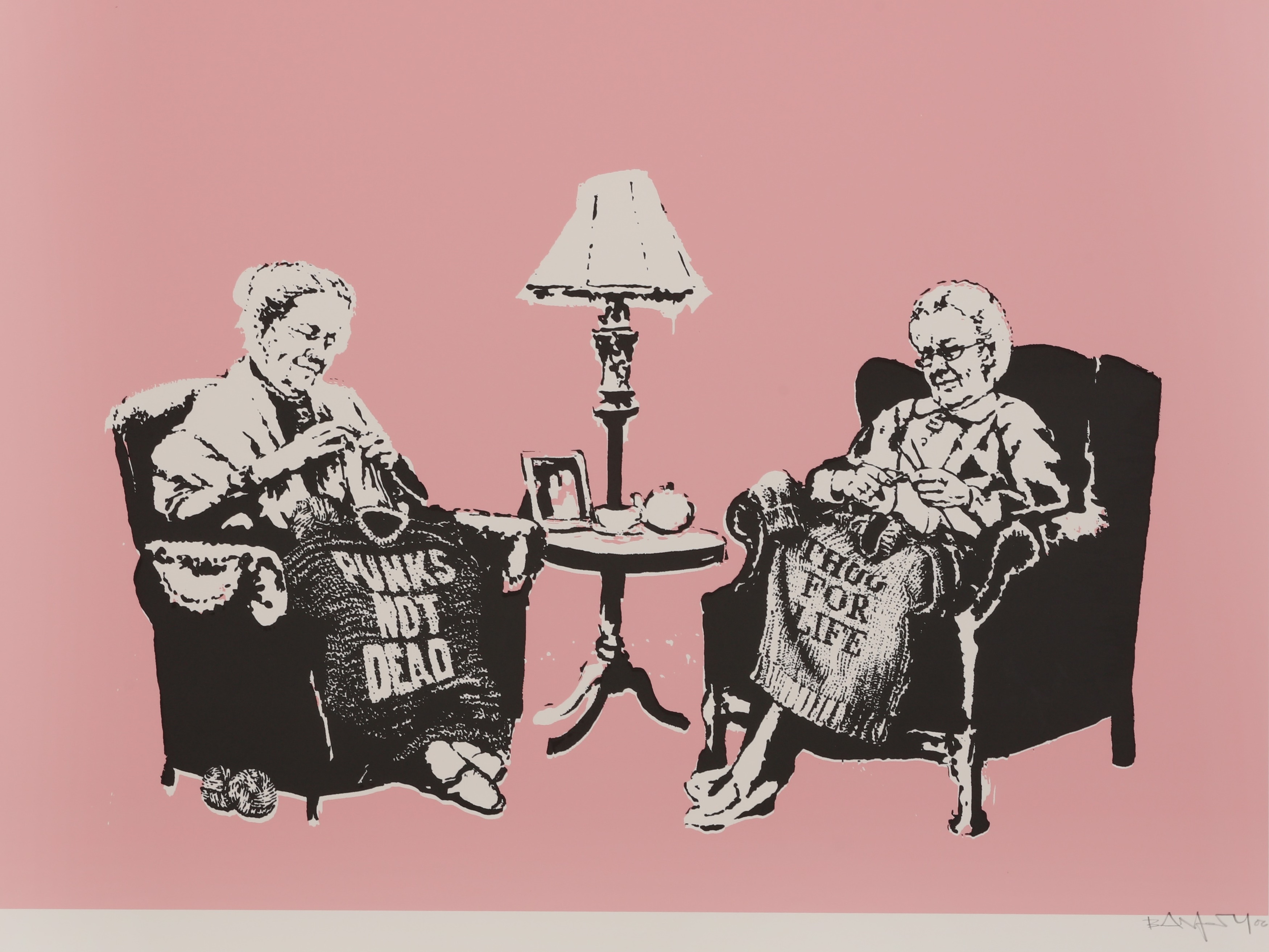 A similar case can be seen in that of Banksy’s market.  Recently, prices have been soaring for his works.  For example, on 24th February 2009, Bonhams sold a signed Banksy ‘Grannies’ for £3,600.  On 18th March 2021, Sotheby’s sold a signed Banksy ‘Grannies’ for £107,100.  Watching this rocketing in prices, suggests that investing in a market such as that of Banksy screenprints could win you huge returns.  At Chiswick Auctions, in our upcoming Urban & Contemporary Art auction on 11 June we have a signed ‘Grannies’ lot 690 up for auction with an estimate of £50,000 – 70,000.  This work is accompanied by another four Banksy screenprints: ‘Bomb Love’, ‘No Ball Games’, ‘Happy Chopper’ and ‘Very Little Helps’, all with equally inviting estimates.

There are of course concerns that arise when investing in art.  However, most of these can be dismissed when discussing the Banksy screenprint market.  One concern is the heterogeneity of art; the unique quality of an original work which makes it hard to quantify.  However, in the case of print multiples, they are not unique pieces and exact comparable example prices can be tracked to establish a quantifiable value which can be traced through trading increases and decreases much like any other asset one might invest in.  There is also the concern of fakes and forgeries when it comes to investing in art.  However, in the case of the Banksy works specified above in our upcoming auction, they do not only come with a Certificate of Authenticity (COA) from Pest Control (the body which manages the oeuvre of Banksy and the authenticity of his works on the market).

Moreover, there might be concern in the trading platforms for art when investing.  Galleries are unlikely to re-purchase stock they have previously sold, and if they do they are likely to prioritise new stock.  If one were to sell at auction, there may be a concern that one would have to wait until a relevant auction and one where there were not too many of the same print multiples in one sale.  The benefit of Chiswick Auctions is that we have some flexibility in our auction calendar and if particularly exciting works were to come through our doors, we may be able to add an additional auction into the calendar to accommodate these.  Furthermore, a seller might be fearful of high transaction costs when looking to sell and gain the returns on their assets.  Chiswick Auctions offers a 0% seller’s commission on any fully certified Banksy screenprint.  This enables the seller to walk away with 100% of the hammer price.

As can be seen, investing in art can yield vast returns, but it is important to remain savvy.  One should ensure that they have thoroughly researched the artist’s market in which they are investing or have a trusted specialist whom can advise them.  It is also important to love it.  If you love what you buy you should never be too susceptible to disappointment if the market trends fluctuate or shift.