Early accounts and western mapping of the East

Over the centuries European writings on East Asia have depicted how the region was shaped in the imagination of the Western world. The Far East has been regarded as a very fertile literary ground from the Middle Age, until recent times. Themes included the combining of the exotic and the domestic, and how westerners have understood and represented the heterogeneous territories, people of Asia and their cultures.

Book Specialists, Dr Carmen Donia and Clare Marshall look at the history of travel and cartography in Russia and China during the 16th and 18th century, through some items offered in the upcoming Rare Books & Works on Paper sale.

Marco Polo was one of the first European travellers who journeyed along the Silk Road between 1271 and 1279, and inspired Europeans with his descriptions of the mysterious culture of the Eastern World. Although he did not produce maps himself, his accounts became the basis for many maps and voyages for the following centuries.

The most accurate 16th century western map of China by the great Portuguese mapmaker, Luis Jorge de Barbuda, was published by Ortelius in 1584. Barbuda was captured by the Dutch on his voyage back to Portugal from his Jesuit Mission to China in 1577. He readily agreed to trade his manuscript maps to save his life.

The Dutch East India Company (VOC) established a monopoly on the spice trade from the Moluccas. They gained control over the clove trade through an alliance with the Sultan of Ternate in 1607. The VOC relied on the most up to date cartographic information to maintain their monopoly over part of the East Indies. 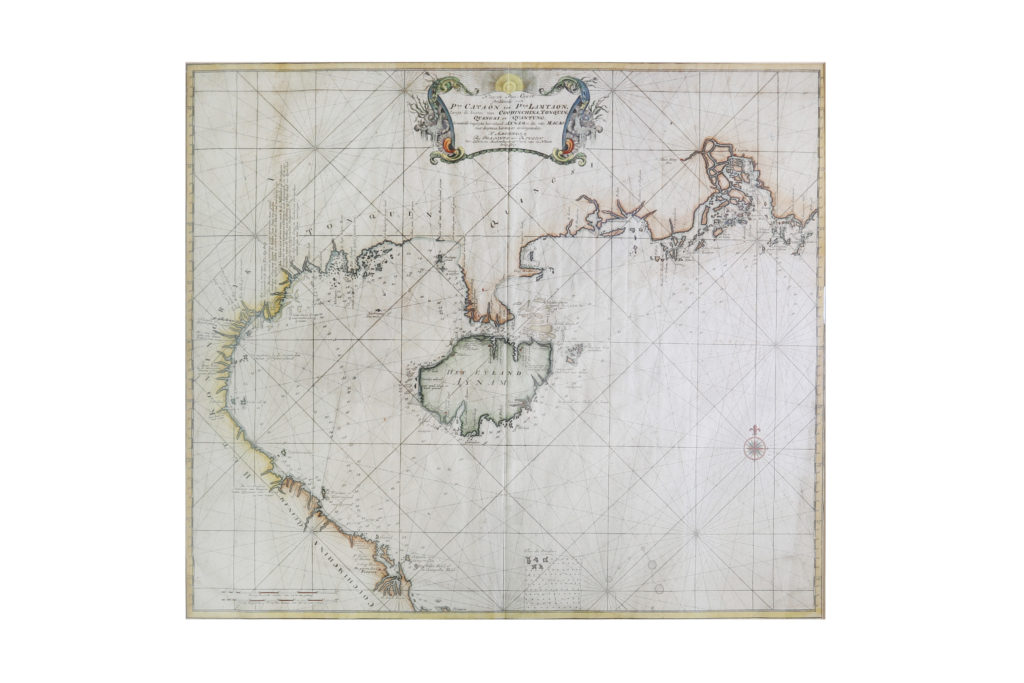 Johannes van Keulen (1704-1755) produced a ‘Secret Atlas’ for the VOC. This atlas was not offered for sale to the public and was only issued to VOC ships with explicit instructions to be returned after each voyage. The ‘Secret Atlas’ ensured that the VOC retained the best navigational information and coastal details of the China seas.

Lot 213. Thornton (Samuel), A Large Drought of the North Part of China Shewing all the Passages and Channells into the Harbour of Chusan. Estimate: £600 - 800.

John Thornton, hydrographer of the East India Company, drew manuscript charts on vellum of the East Indies. Seventeen of these manuscript nautical charts are now held in the Bibliothèque Nationale in Paris, after they were captured by the French from the English East Indiaman, the ‘Canterbury’, off the coast of Malacca in 1703. The charts contained detailed information that was otherwise thought to have been known only to the Dutch. Thornton reconstructed his charts for his ‘English Pilot, The Third Book, Describing… Oriental Navigation’, first published in 1703. This pilot constitutes a body of work large enough to enable us to envisage the working methods of the cartographer of a great company of that period.

These maps and charts, offered in our auction, are a good insight into the important cartographic discoveries in the East Indies. Including fine charts by Johannes van Keulen (Lot 219) and John Thornton (Lot 213).

Visions of Russia as bizarre and exotic, has stemmed from its geographical and cultural placement, defined as both East and West. The main sources of knowledge available about the country of the Tsar came from continental Europe through the medium of cartography and books.

Austrian ambassador Baron Sigismund von Herberstein (1486-1566), was one of the first Westerners to live in Moscow and leave detailed written reports of his experiences, he completed two diplomatic missions to Russia. He was sent by the Austrian Habsburg Emperor Maximilian I in 1517, and Archduke Ferdinand in 1526, to negotiate a peace settlement between King Sigismund I of Poland (1467-1548) and the Russian Tsar, Vasily III (1479-1533). Von Herberstein, like many other Western visitors over the years, wrote in his famed ‘Rerum Moscoviticarum Commentarii’ or ‘Notes on Muscovite Affairs’, that he had been impressed by the severity of the winter weather, by the widespread drunkenness of the people and their leaders, the authoritarianism of the Russian Tsars and by the disturbing observation that “this people [seem to] enjoy slavery more than freedom”.

Herberstein’s account constitutes an attempt to accurately describe Russia to a Western audience. Over the centuries, many Western travellers to Russia have shared von Herberstein’s sometimes controversial judgment of the Russian state and people. Rerum Moscoviticarum Commentarii has been universally acknowledged as the most important historical and ethnographical work on early 16th century Russia. The book is not only a well written and enjoyable travel narrative but is also the first accurate ethnographic encyclopaedia by an eyewitness about early Russia, or Muscovy, as it was then known. He carefully reviewed the existing literature on Russia, including works by Paolo Giovio, Olaus Magnus and Sebastian Münster, but his account was far more trustworthy and complete than those of his predecessors, drawing an overview of trade, religion, customs, history and a theory of Russian politics. His perception of the tyranny of the Grand Prince of Moscow and the prominence of religion in Russian life was at the centre of his work. 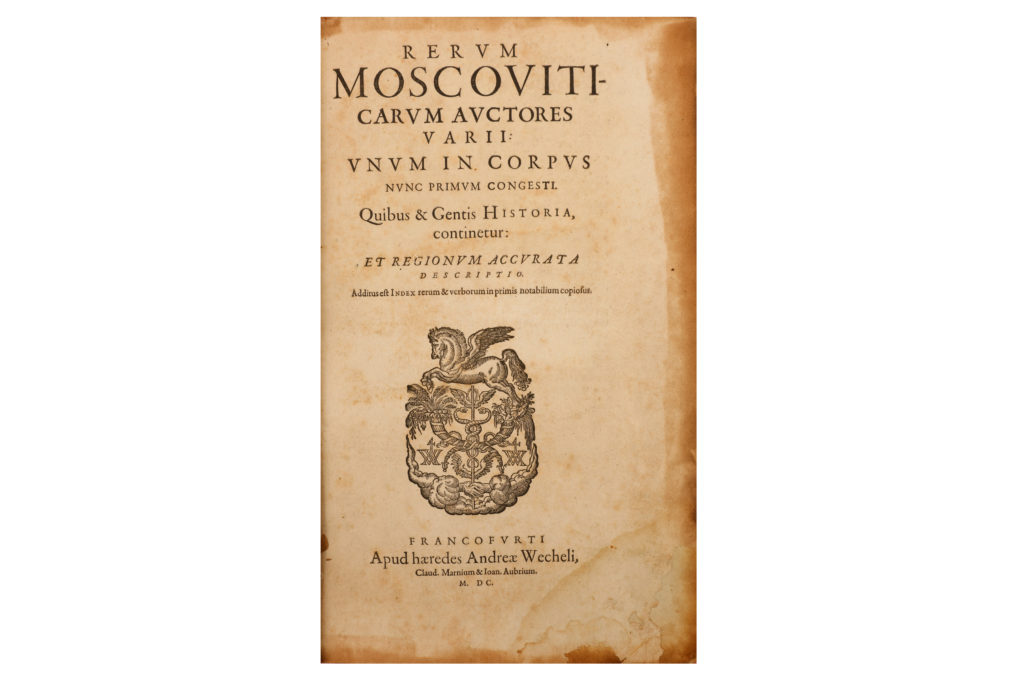 Lot 114. [Herberstein, Sigismund von, & al.] Rerum Moscoviticarum auctores varii unum in corpus nunc primum congesti. Estimate: £1,500 - 2,500
First published in Vienna in 1549, by Aegidius Adler and Hans Kohl, the book had considerable success and was translated and reissued many times. It presents a broad view of Muscovy, its ancient history and geography, its capital, Moscow, and the Orthodox faith. It also contains accounts of its manner of governance, legal system, administration, army, social conditions, treatment of envoys, daily life and customs, as well as, trade and economy. In addition to accounts of Russian ethnography and history, it also provides important information about the countries adjacent to it. 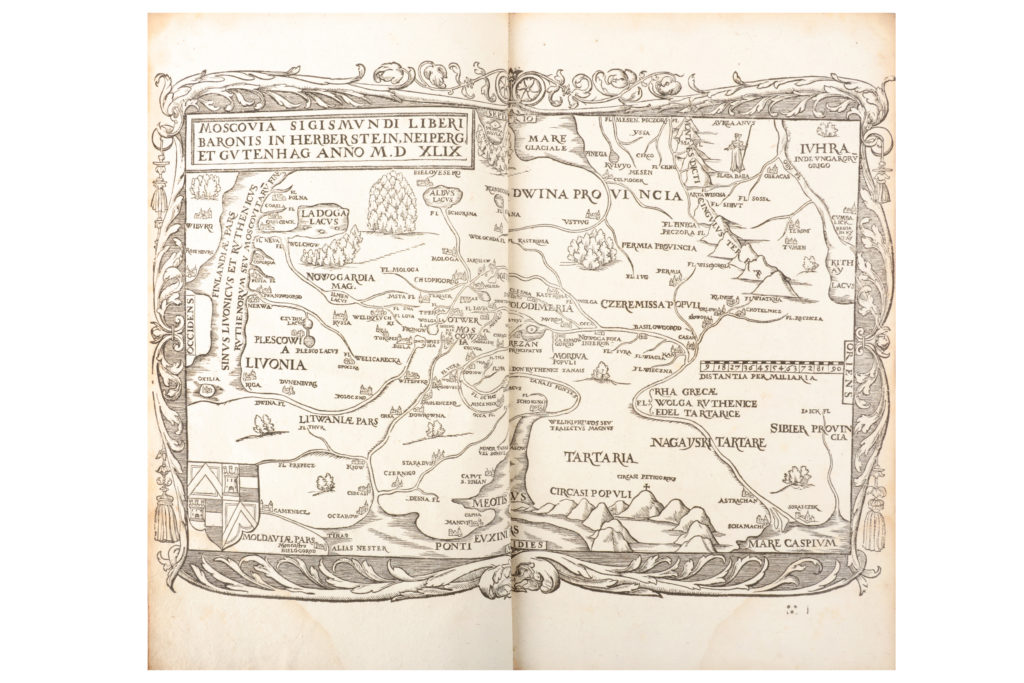 Among the others, the early editions of the book (1550, first Italian edition, and 1600, Frankfurt) include fine woodcut illustrations representing the Russian army with weapons and horses, charming scenes of sleighing and skiing on ice and a portrait of the Grand Duke of Muscovy, as well as rare maps of Russia, including one by the Italian cartographer Giacomo Gastaldi, who appears to have used von Herberstein as a source for his map of Russia in his miniature atlas of 1548 and then engraved this larger version for the Comentari della Moscovia two years later. 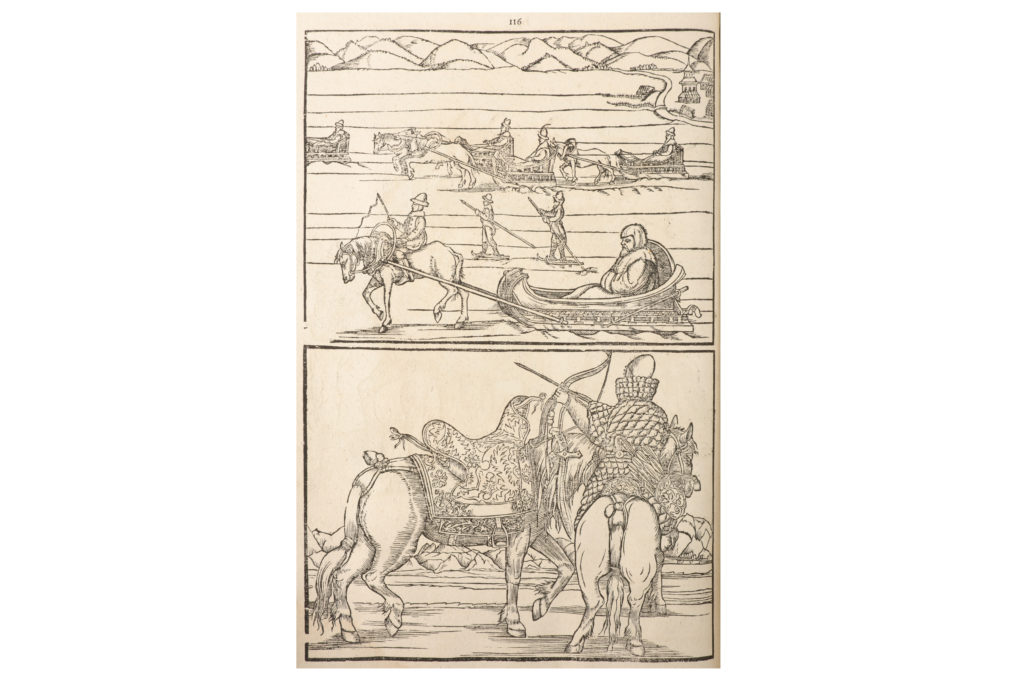 Russian weapons were unquestionably fascinating to Westerners. Herberstein explains what a shestopero is – a Hungarian mace made of ivory, and one of the weapons used by their military.

The book particularly contains woodcuts of Russian archers in their quilted clothing with their bows and arrows. Both men and military supplies show a strong Tartar influence. Worthy of note are also drawings of a bison, as well as Herberstein’s arms. Our copy of the book (lot 114) offered in the forthcoming book auction comes from the library of Charles Wentworth George Howard (1814-1879), British Member of Parliament.