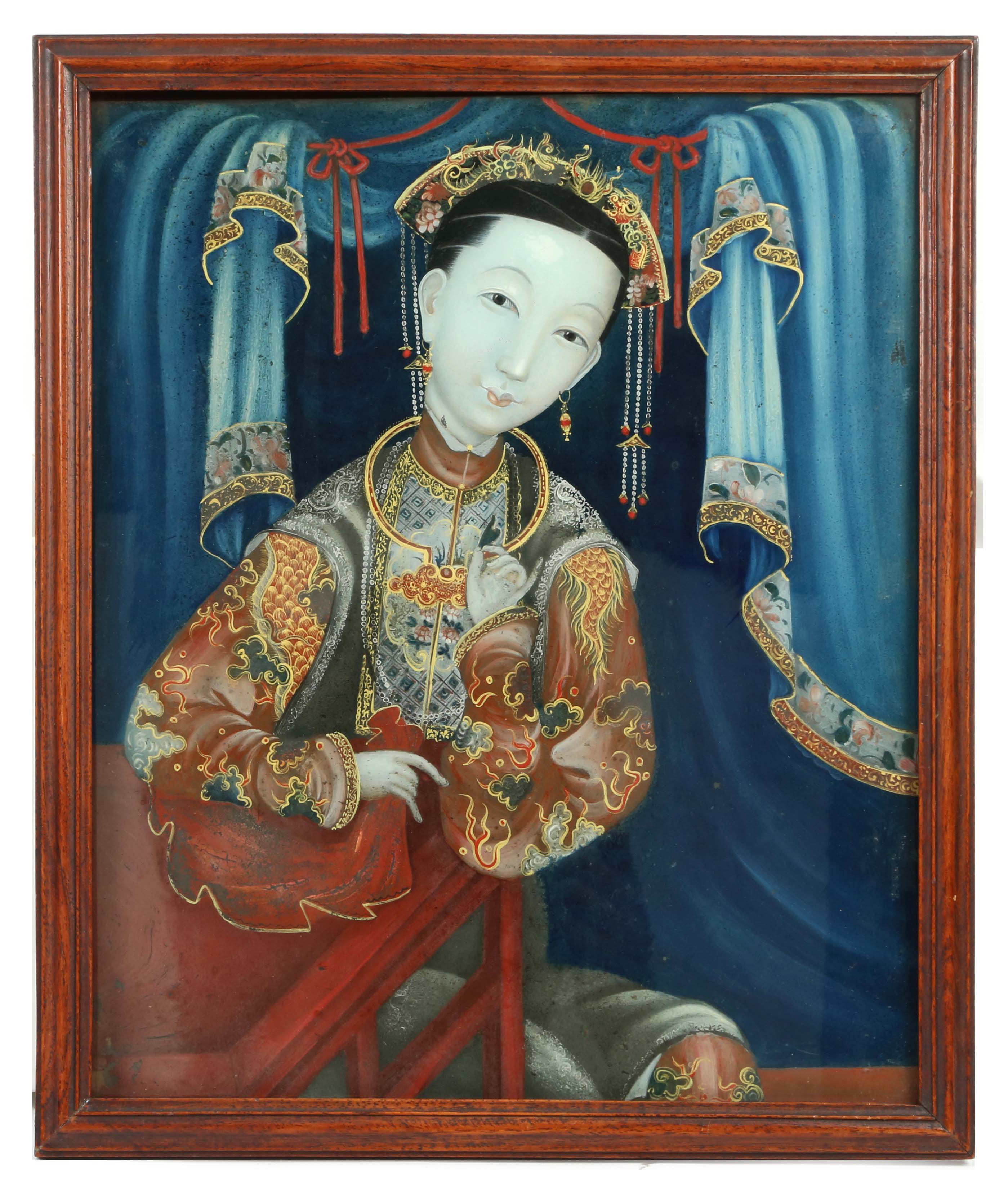 Reverse glass paintings occupy a special position within Chinese art crossing over the genres of Chinese export art, glass working, the painting genre of meirenhua (paintings of beauties) and erotic art. Generally associated with English country house collections throughout the 18th Century and later, when their vibrant colours and exotic flavour made them the height of fashionable sophistication and indeed both lots 120 and 121 were almost certainly produced for the export market. Lot 120 follows a European original which would have been reversed and meticulously copied in oils onto the glass by use of a Chinese brush by artists working in and around Guangzhou to service the Southern Chinese ports and the export market [figure 1].


Beurdeley’s (1971) catalogue raisonné of Guiseppe Castiglione does not include any examples of reverse glass painting. However, one painting in oils, plate 85, a portrait of a young woman dressed as a European Shepherdess [figure 2], bears close compositional similarities to works on glass. The piece is attributed to Castiglione and is listed as being formally in the Imperial Palace Collection (Guiseppe Castiglione: A Jesuit Painter at the Court of the Chinese Emperors).  The oil, said to depict the Qianlong Emperor’s favourite concubine, Rong Fei, presents a Chinese lady seated in a relaxed pose in loose flowing robes and staring directly at the viewer, all features shared with the beauty depicted in lot 121. The erotic undertones of both paintings, explain why the latter painting was selected by Bertholet for inclusion within his book on the subject. The piece also fits into a wider category of beauty paintings, which has experienced an expansion of academic attention led by James Cahill (2010) and the recent exhibition, Beauty Revealed (2013). Neither, however, addressed reverse glass paintings despite its contribution to the genre. Whilst primarily an export art, its Imperial patronage, technical sophistication and Chinese aesthetics demand that it receive closer academic attention within the canon of Chinese painting art.

The lots above will be offered in ASIAN ART, 16 May 2016 by Chiswick Auctions.


To the ASIAN ART homepage

To the Asian Art Blog Homepage