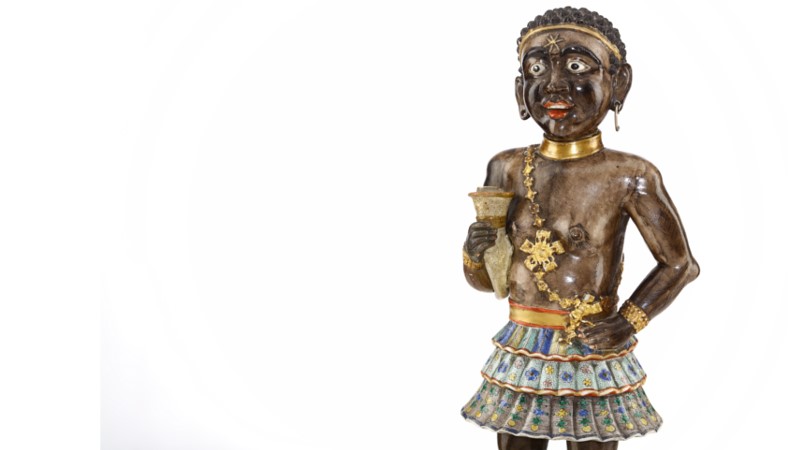 The present piece falls into the category of the rarest and very finest groups of sculptural depictions of Africans during the Qing period. One other piece of comparable quality is known, illustrated in Chinese Porcelain and Hardstones later passing into the Lever collection.

The Lever piece was acquired from the S.E Kennedy Collection at Christie’s on 21 June 1916 (lot 80), by Frank Partridge, on Lever’s behalf for a sum of £1,000. This substantial sum was reflective of the huge popularity of famille noire at the time. In England, and more so in America, where the price for such a piece would have been significantly higher, such pieces were truly considered ‘millionaire’s taste’. In the 1911 description, the piece is noted as being Kiun or Kuan, the mystical Holy Ghost of Buddhists: “with bossom bare, she is intensely black, deep as night itself, a symbol of immense antiquity” (Gorer and Blacker, Chinese Porcelain and Hardstones, 1911, plate 74.) A nativist reading of the figure is interesting given the long history of African populations within China. Rashidi (2012) documents these from the depiction of African figures within Chinese bronzes, sculpture and works of art to historical evidence for a Diminutive Africoid race resident within China up until the Qing Dynasty.

However, the piece might also be considered in the context of Western subjugation through the discourses of historicisation, infanticisation, feminisation and exoticisation that it fits so easily into. A Western derivation for the model seems possible and may have derived from Western prints accessible in China at the time. For example, one of many armorials depicting Africans and reproduced in Chinese armorial porcelain are the arms of the Paravicini di Capelli, from which a dish is preserved in the Carmontel Collection, Paris. Here a young African girl with bare chest and naked feet sports a short pleated skirt and a necklace, uncannily similar to the attire of the present piece.

Its historical significance, bringing together as it does the three continents of China, Europe and Africa, is also its artistic virtuosity. The expressive face is dynamically poised, the body is naturalistically modelled and the work is finished with close attention to smallest details down to the body hair deftly applied in fine brush strokes. This is a nuanced and multi-faceted sculpture but one which also conveys humour and a light-hearted touch.

A CHINESE FAMILLE NOIRE CANDLESTICK MODELLED AS A DARK-SKINNED FIGURE. Qing Dynasty, Kangxi era. Naturalistically modelled as a young Black female, holding in her right hand a horn, she is naked save for a short pleated skirt in three tiers, enamelled on the biscuit in yellow, aubergine, green, and white with scroll and jewel designs, the rest of the figure is enamelled in black, except for the eyes, mouth, nails, waistband, armlets, collar, ankle-bands, and bandolier of jewels, which are gilt and red. There is a star-shaped ornaments on the forehead, 39cm H. ???   ???????

The above lot will be offered in ASIAN ART, Monday 15 May 2017 by Chiswick Auctions.