‘This wild cousin of mine’ – Clare Sheridan, a portrait 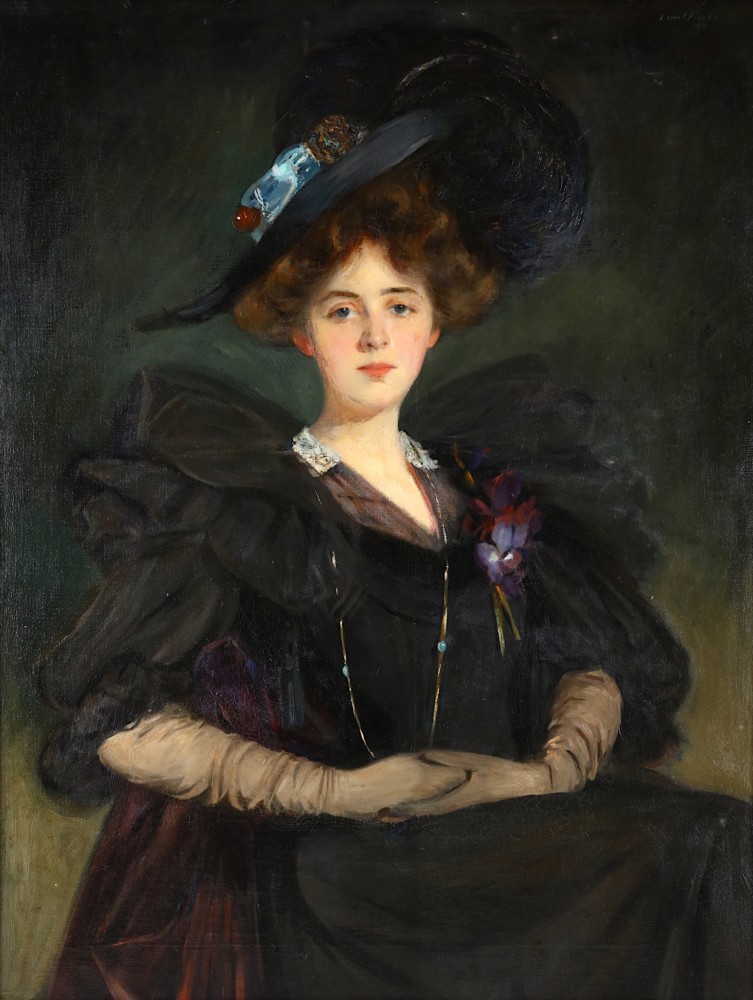 Ahead of the auction of British & European Fine Art with Portrait Miniatures on 12th December, the Fine Art department takes a closer look at a portrait, dated 1907, by Emil Fuchs offered in the sale. Fuchs’s early mentor in England was leading portrait painter John Singer Sargent and his commissions included royalty such as Queen Victoria and Edward VII and high society figures in America and Europe. This is encapsulated in Fuchs’s portrait of the glamorous and talented bohemian, Clare Consuelo Sheridan (née Frewen) – an aristocratic but altogether unconventional writer and sculptor with a connection to Winston Churchill.

Born in London in 1885, Clare Frewen was the daughter of Moreton Frewen, nicknamed ‘Mortal Ruin’ because of his ill-considered financial dealings and the wealthy American Clara Jerome. Jerome’s mother was the elder sister of Lady Randolph Churchill, making Clare a cousin to Winston Churchill. Brought up in Cork on the family’s 3,000-acre estate, Clare was not formally educated but nonetheless nurtured ambitions to be a writer. Despite Churchill's patronising advice that it is ‘better…to please and inspire the male sex’, she received encouragement from family friends including Henry James, H.G. Wells and Rudyard Kipling.

In 1910, without both their parents’ consent, Clare married the stockbroker Wilfred Sheridan, who was said to be the best-looking man in England. Wilfred died in the Battle of Loos in 1915 and when his body was recovered, a note in his pocket addressed to Clare was discovered.

‘I can leave you nothing, darling, except the memory of years, and you know what our life together has been. Surely if perfection is attained we have attained it.’ - Wilfred Sheridan

This was not the first time that tragedy would strike Clare’s life; she lost another lover to war, Alexander Thynne, the son of the 4th Marquis of Bath, and two of her three children died before she did: Elizabeth, in 1914, at the age of one, and Richard, in 1937, in his early 20s. 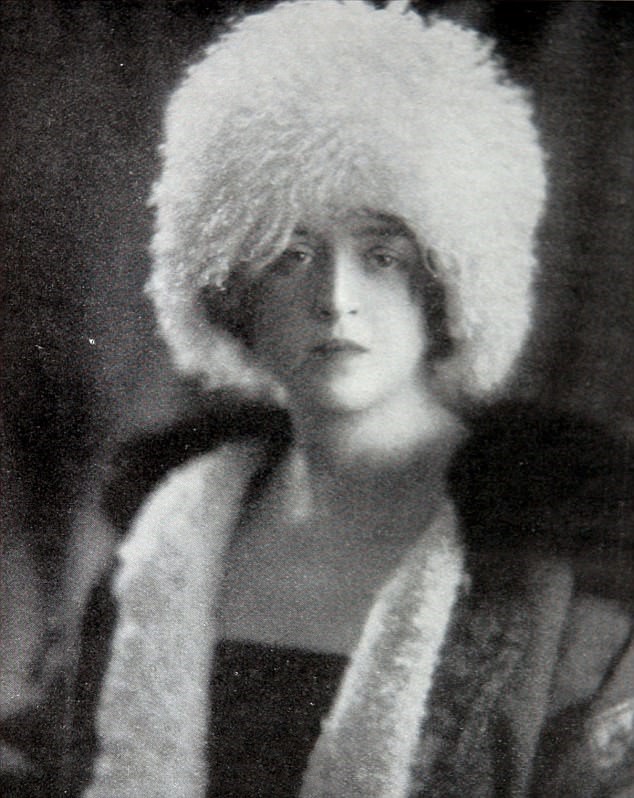 The recurring theme of heartbreak in Sheridan’s life was played out against an intriguing backdrop of seduction, scandal and espionage, enriched by Bright Young Things and powerful international leaders. At the end of the First World War, Clare was a widower with an annual pension of just £250 and friends in high places. This high society circle included the Mountbattens, Lady Diana Cooper, Vita Sackville-West and Vivien Leigh. Realising that something would have to change, Clare decided to become a sculptor. Following a project to sculpt the bust of Herbert Asquith for the Oxford Union, success came quickly and subsequent commissions included H.G. Wells, Arnold Bennett, Gladys Cooper, Diana Manners and Churchill himself.

As a consequence of Sheridan’s affair with head of a Soviet trade delegation and diplomat, Lev Kamenev, whom she met in London, she was invited to travel to Russia in 1920 to make busts of other members of the Soviet hierarchy including Vladimir Lenin, Leon Trotsky and Felix Dzerzhinsky. Seduced by the prospect of an adventure, she left for Russia under a veil of secrecy. During a time when women were expected to at least appear honourable, Sheridan made little effort to hide her beauty or sex appeal and Kamenev’s talk of equality and freedom contrasted to the hierarchical, money-driven society in which she was struggling to survive. She is reputed to have had affairs with other sitters, including Trotsky, who is said to have signed and dedicated a painting of himself to Sheridan and invited her to stay in Russia and set up a studio. This attracted the attention of MI5 who labelled her a ‘dangerous propagandist.’ During her lifetime, MI5 would collect an archive of evidence that suspected her of intimate relations with and spying for the Soviets.

Sheridan’s stay coincided with the Russian Civil War and, as Secretary of State for War, Churchill was pushing for British and allied intervention. Upon hearing about what had happened, he was enraged by her behaviour and referred to her as ‘this wild cousin of mine.’ Upon Sheridan’s return to London, her diaries were serialised in The Times and The New York Times. Despite her celebrity status, the rosy depiction of the Bolshevik regime caused outrage. Churchill refused to see her and she was widely scorned by her family and the establishment. As a result, she fled to New York to become a reporter for the New York World.

‘She was wonderful looking and exciting to have around but so damn fatiguing. Something had got into her – energy-sex drive – she ran around New York like a fire engine out of control, scandalising high society.’ - Bernard Baruch

The editor of the paper, Herbert Swope, was impressed with the account of her time in Russia, recounted in Russian Portraits and employed her as European correspondent. Sheridan travelled widely and achieved notable accolades during her time at the paper; she interviewed Benito Mussolini in Rome, wrote about the Greco-Turkish war and interviewed Michael Collins and Rory O’Connor during the Irish Civil War.

In 1922, Sheridan travelled to Switzerland where she met Mussolini at a conference. A British spy sent to monitor her reported that she ‘aired her views…especially in connection with free love.’ In an attempt to win favour, Sheridan is also said to have declared that ‘Mussolini had converted her from Bolshevism to Fascismo.’ This tactical declaration appeared to work and Mussolini invited her to his hotel room, where she attempted to persuade him to be interviewed and sculpted. She later wrote in her memoir that Mussolini’s bestial behaviour that evening was ‘unwriteable’ and she described him as a ‘grotesque tyrant in white spats.’

In 1923, Sheridan went to Germany to hear Hitler speak and an MI5 informant reported that ‘she was very much impressed with the extraordinary enthusiasm that von Hitler aroused amongst the audience of some 10,000 people, with an extraordinary blood-thirsty speech.’ By this time, MI5 were accumulating evidence against her. They watched her, tapped her telephone and monitored her mail, which proved that she was indeed feeding information about delicate issues such as foreign affairs to the Soviets for money via two Russian agents, the Daily Herald journalists George Slocombe and Norman Ewer. 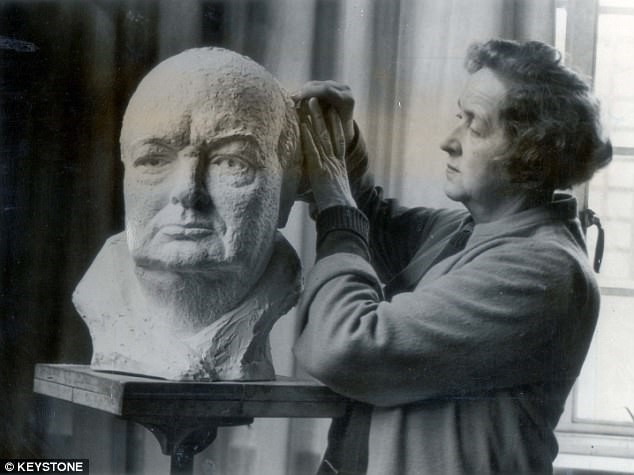 In 1925, Sheridan left for Algeria where she had an affair with womaniser Major Ronnie Bodley. The affair was brief but she remained in the country and built a home in Biskra, on the edge of the Sahara. During this time, MI5 observed that ‘she appeared to be comfortably well-off and debt-free for the first time in 10 years’, perhaps too much so for an artist.

Despite her betrayal, Sheridan and Churchill put aside their differences during the Second World War and remained good friends. She spent time at his home, Chartwell, and occasionally accompanied Churchill to the underground shelter at 10 Downing Street. In 1942, Churchill invited Sheridan to sculpt his bust in Downing Street and during two weeks of sittings, she wrote ‘He never gives me a chance. Always that blasted cigar in his mouth which twists his face.’ Nevertheless, the bust was considered a great success by both parties. After the war, an unexpected change of heart occurred when Sheridan converted to Roman Catholicism. Although she continued to sculpt, she only chose religious subjects. 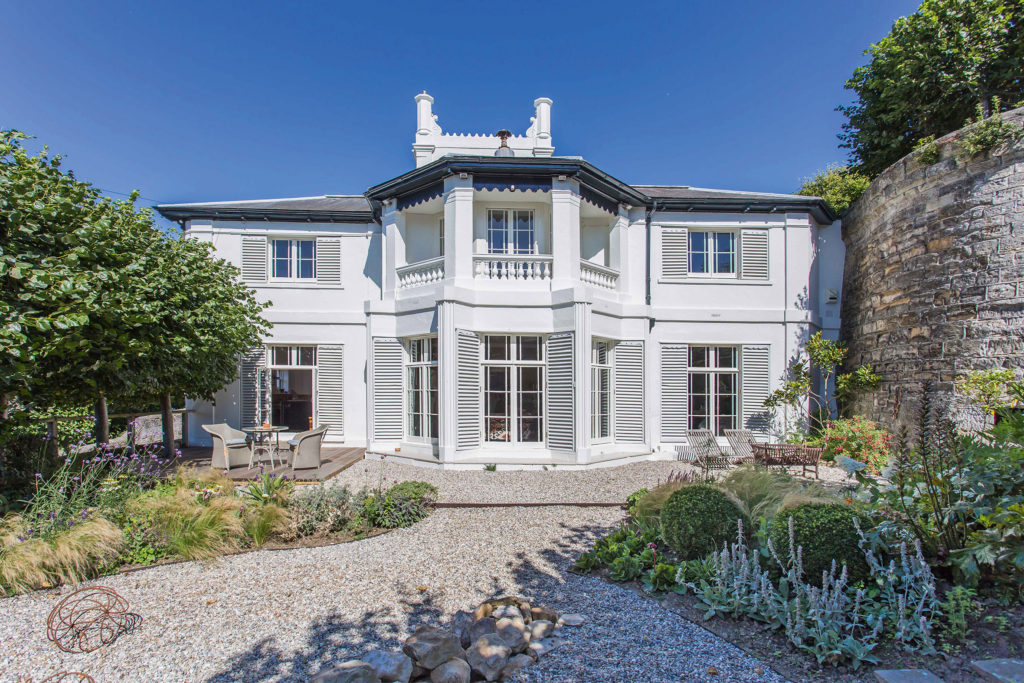 In 1956, Sheridan moved to a Grade II listed Italianate villa in Hastings called Belmont House, (pictured above.) By this time, her scandalous days were a thing of the past and she lived here until her death in 1970.

Driven by Sheridan’s attraction to powerful men and desire for the limelight, her younger years were deemed ‘damaging’ for both Britain and Churchill. It seems paradoxical that her abhorrence of the rigid class structures in which she lived ultimately saved her; her well-connected position in society meant she went neither punished nor imprisoned for her actions. Brave, talented and unafraid of her sexual prowess, Sheridan was arguably a woman ahead of her time.