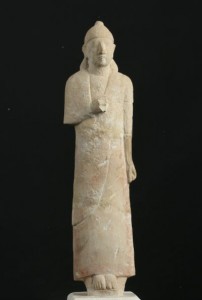 The next Antiquities and Tribal Art sale at Chiswick Auctions, which will take place on the 29th September, will feature the collection of the late sculptor Michael Michaeledes (1923-2015).

Michaeledes was born in Nicosia, Cyprus, but spent most of his life abroad, first in Italy where he studied architecture, and then in London, where he lived since 1955 establishing his architecture and sculptor workshop. In 1976 he represented Greece at the Venice Biennale and his works are held in many museums and private collections worldwide.

The collection, mainly formed between the 1950s and the 1970s, includes pieces of ancient art from his motherland Cyprus. An example is the outstanding Cypriot limestone figure of a worshipper, 33cm high, from the 6th Century B.C. which is estimated to sell between £1000-1500. This sculpture was previously in the collection of another illustrious British artist: the playwright, novelist and short stories writer W. Somerset Maugham, author of the novel ‘Of Human Bondage’ and reputedly one of the highest paid authors of the 1930s.

After Maugham’s death in 1965 part of his estate was auctioned by Sotheby’s, where Michaeledes purchased the limestone figure and other items now offered with the rest of his collection. 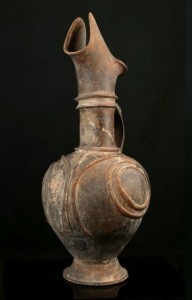 Another highlight from the Michaeledes Collection is a sizeable Cypriot base ring ware jug from the late Bronze Age Period, circa 1600-1450 B.C. Showing the typical decoration in relief with grooved ropes and the ring base that gives the name to this style, this outstanding example belongs to a super-sized variety of this shape which is rarely seen at auction. Another example similar in size was part o the famous Desmond Morris Collection, one of the most prestigious collections of Cypriot art. 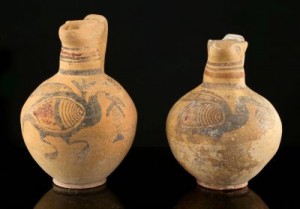 Also on offer in the same sale is a pair of Cypriot terracotta jugs of the ‘free-field’ style decorated with large birds holding a fish in their bill. This was a very popular motif in Cypriot art which has possibly been inspired by similar ‘Nilotic’ scenes from Egypt and then adapted to the Cypriot taste, bringing testimony of the strong cultural and commercial links between these two fascinating civilizations of the past.