The Look of Love – Aldo Cipullo and the Cartier love bracelet 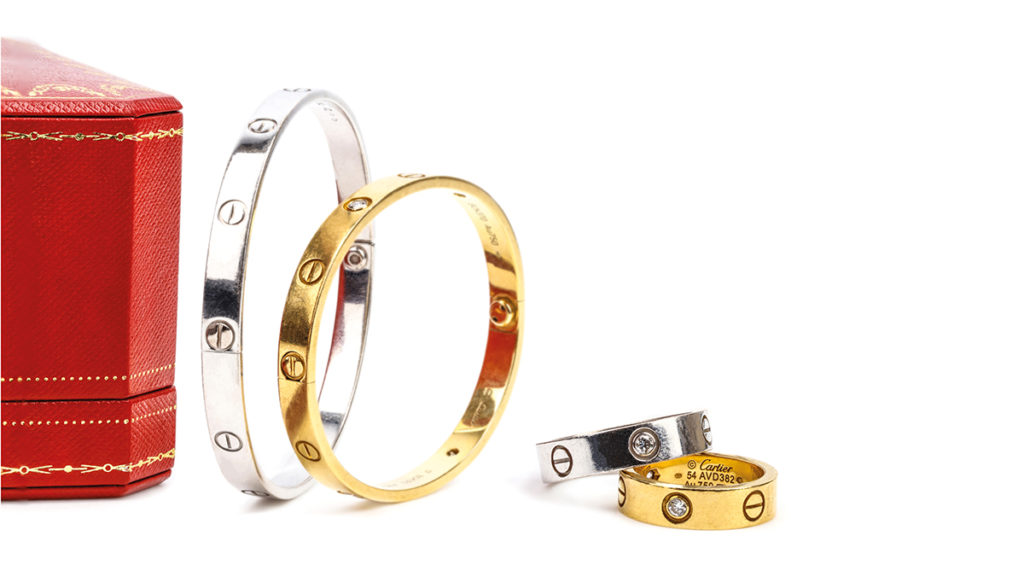 ‘Love has become too commercial, yet life without love is nothing — a fat zero. What modern people want are love symbols that look semi-permanent — or, at least, require a trick to remove. After all, love symbols should suggest an everlasting quality.’ – Aldo Cipullo

Ahead of the Jewellery auction on 6th February, Head of Department Sarah Duncan delves into the history of the iconic Cartier Love bracelet, which has adorned the wrists of A-listers across the globe since its inception and is arguably the most popular piece of jewellery ever made.

According to legend, Cartier refused to allow an individual to purchase a Love bangle for themselves in the early days and would insist that one must be gifted to the interested buyer instead. The story of the bracelet starts with Aldo Cipullo (1935- 1984), a young Italian goldsmith who emigrated from Italy to New York, leaving behind a successful family run costume jewellery company.

New York in the 1960’s and 1970’s was home to the spirit of revolution and formed a glamorous backdrop to burgeoning creativity and shifting social structures. Cipullo quickly found himself a place among the ‘It’ crowd of Manhattan and his Love bangle would later become a must have item for the city’s chic inhabitants.

‘When you have function and design, married together, you always have a successful item.' – Aldo Cipullo

After working at design houses including Tiffany & Co and David Webb, Cipullo joined Cartier in 1969. This was during a time when the company was planning to instil a dynamic shift in the way women and men wore jewellery and create adaptable designs that could be worn day and night. Their focus was to capture the flourishing youth movements, the women’s right’s movement and pop art, amongst others, in their designs. The influence of Minimalism is evident in both of Cipullo’s pinnacle creations - the Love and Juste un Clou collections. Both collections helped to establish Cartier’s reputation as a modern jewellery house in this redefining era. 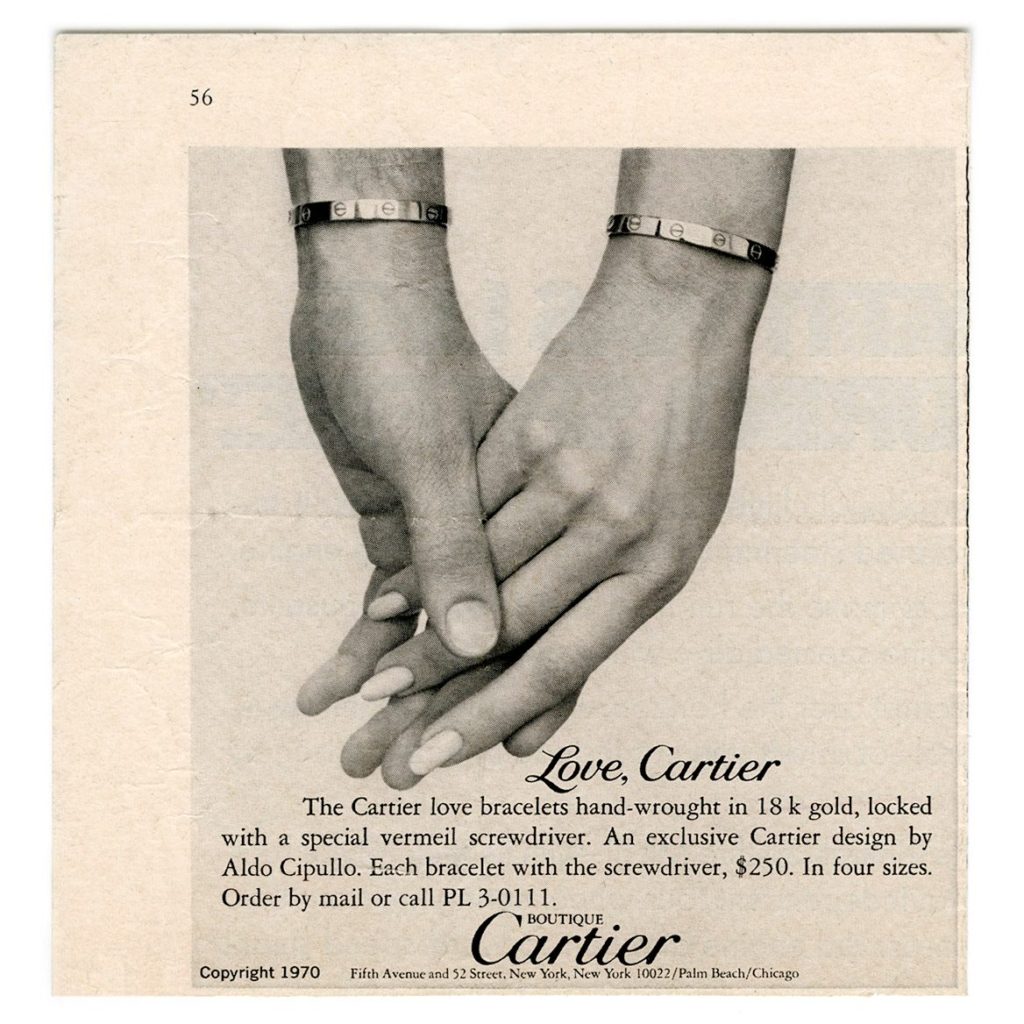 Shortly after the launch of the love bracelet, the surge in demand sparked a partnership between Cipullo and Charles Revson, founder of Revlon Cosmetics. This collaboration saw the creation of a special edition ‘Love Bracelet’, which differentiated from the original by a Revson imprint on the inside and a screw closure on one rather than both sides of the bracelet. The bracelet was also electroplated to make it more widely available.

Cipullo’s inspiration for the Love bracelet originated in the concept that warriors, before departing for battle, would ‘lock’ their wives away in the form of a chastity belt. This is echoed in the bangle’s distinctive oval rather than round shape, which means it sits as close to the wrist as possible. Each Love bracelet purchased from Cartier is accompanied by a small screwdriver that completes the ‘installation.’

‘The Love bracelet appears simple in form but reveals a masterclass in history and design.’ – Sarah Duncan

Originally intended to be sold as a ‘his and hers’ set, the design was seen by Cipullo as a permanent accessory that symbolised a committed relationship. This was reinforced by a decision to gift high profile couples the set and recipients included the Duke and Duchess of Windsor, Steve McQueen and Ali MacGraw, and Elizabeth Taylor and Richard Burton. Shortly after the launch of the Love bracelet, it became quickly comparable to wearing an engagement ring. The sets of ‘his and hers’ Love bracelets and rings offered in the forthcoming auction (pictured above) are in keeping with Cipullo’s romantic notion that the bangles were to be exchanged by a pair as a pledge of their enduring love.

In 2012, Cartier hosted an exhibition ‘Cartier & Aldo Cipullo, New York City in the 70s’, which was curated by Cartier in collaboration with Stefan Beckman. The online magazine Artdaily.com reviewed the show, praising ‘Cipullo's instinctual talent for capturing the spirit of the times and dazzling dexterity of the jewellery arts.’

Early examples of the Love bracelet and the Juste de Clou all bear Cipullo’s signature, which was unusual for Cartier who rarely advertise their collaborations. According to a TSA agent quoted in 2015, Cartier Love bangles are the ‘biggest problem item’ at US airports and legend has it that New York City hospitals keep spare Cartier screwdrivers on hand in case emergency removals are required. The Love range’s unique design and enduring popularity is evident in its continued production. Cartier has since expanded the collection to include earrings, necklaces and cufflinks, which all complement the original design and pay homage to Cipullo's vision.