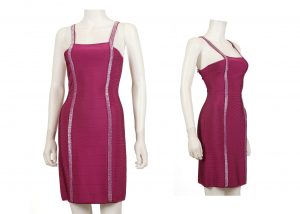 The ideal female body has taken many forms throughout fashion history, formed, in part, by the fashions of day.

In the Victorian period, a time when most women were confined to the home and expected to do ‘womanly’ tasks such as embroidery and reading, the body was squashed via a series of complicated corsets, strapping, padding and cages into a waspish form with a minuscule waist and large hips and chest. With rise of women’s liberation and suffrage in the 1920s, women themselves became more mobile, and the fashions of the day reflected this. The idealised form became almost boyish - long and slim up-and-down figures with narrow hips and flat chests and these bodies were dressed accordingly in loose fitting, low waisted and more, importantly, comfortable, dresses.

During the war, women were called to factory and farming jobs, traditionally done by men and the fashions reflected this. Trousers and so-called ‘Utility Dress’ were the norm. Fabrics were rationed during the war and the following years, meaning that clothes were re-used and re-fashioned again and again.

It was the French Couturier Christian Dior who, once again, changed the ‘look’ of femininity with his so called ‘New Look’ in 1947. Once again waists were narrowed and hips cased in large skirts – joyfully doing away with earlier rations that would have made such full skirts scandalous and unpatriotic.

In the years since there have been many variations of body beautiful, not least the 1980s of ‘power dressing’ business women with big hair and even bigger shoulder pads. There is one kind of dress, and one kind of body type that has remained popular over the last three decades – and that is the slim, athletic body celebrated with the so-called body-con dress.

The French designer Azzedine Alaia (born 1939) launched his own label in 1980s and made a name for himself with his body conscience designs. By doing away with the frills and flounces of his contemporaries, Alaia created seemingly simplistic, block coloured designs that hugged the form. Using the female body as his starting point for all his designs, Alaia continues to this day with body-con type dresses.

It was another French designer, Herve Leger, who cemented the body-con fashion with his now-ubiquitous ‘Bandage’ dresses, which he first started in the 90s and which have more-or-less remained in continuous production. Created from skin-tight knitted panels, the Bandage Dress is the perfect cocktail dress and is as current today as it was in the ‘90s.

A number of Leger and Alaia dresses have recently come up for auction, and most have all sold to private buyers looking for great designer fashion that is wearable and timeless. In my upcoming sale of July 12th I will be selling both Alaia and Leger cocktail dresses, both from the same vendor – a woman with incredible taste, and who clearly went to some fantastic parties!