Sculptures of Venus Through the Centuries

Venus, the Roman Goddess of love, sex and beauty is probably the most widely depicted female subject in European sculpture after the Virgin Mary. She is usually depicted nude or semi-nude in diaphanous robes which contrasts the sculptural depictions of the Virgin Mary, who is covered, often from head to toe, in heavy folds of drapery. The subject matter of Venus also offered sculptors an opportunity to transform hard materials such as marble, alabaster, bronze or wood into soft flesh and bare skin, to give the appearance of turning hard forms into a shapely, warm, human body. As an ancient goddess, nudity was considered to be Venus’s natural state and it was, therefore, acceptable to portray her in this way and as the goddess of sexuality, artists were justified in depicting her in a much more erotic manner than other subjects.

Looking at this small 17th century bronze statuette of Venus, this sculpture is typical of the late Renaissance and early Baroque depictions of Venus. Loosely based on a classical prototype, she displays an emphasis on movement and more dynamic energy in her pose than the ancient figures of Venus, in this she takes inspiration from the works of the great Mannerist sculptor Giambologna. This figure also demonstrates the 16th and 17th century dissemination of sculpture, where small, sculpted figures were used to ornament household objects such as fire irons, desk furniture, inkwells and larger cabinets and pieces of furniture. Secular and mythological figures were used for this type of decoration as opposed to small religious statuettes which were used for personal devotion and to decorate small private altarpieces. 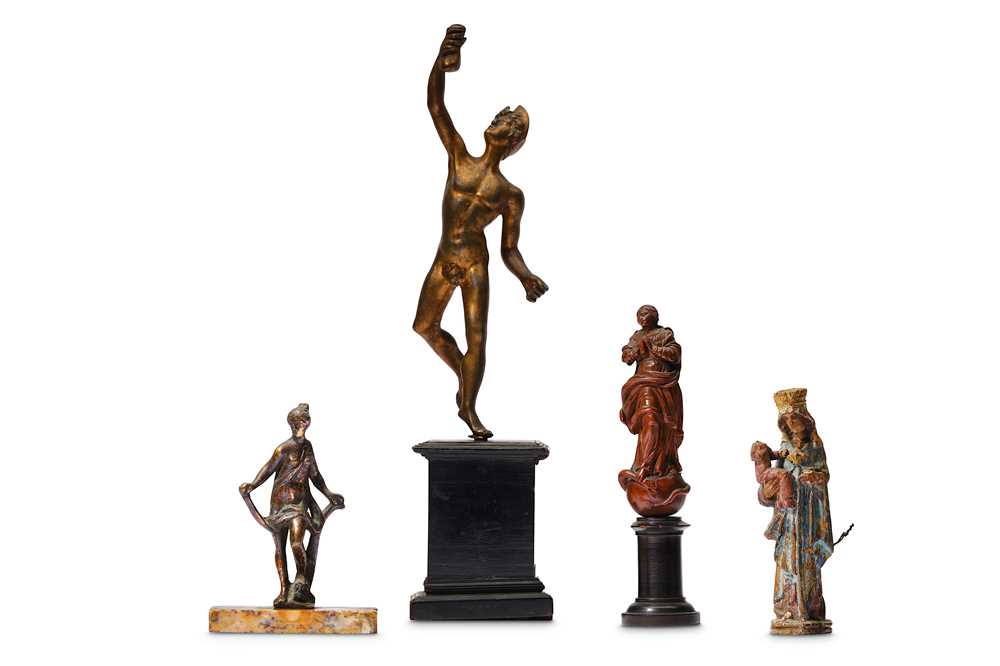 A 17th century gilt-bronze figure of Venus with a dolphin together with three further figures, 12 December 2019. sold for £300 incl. Buyer's Premium.

By the late 18th century, we see the resurgence of the classical style and the depictions of Venus more closely resemble the ancient types, with an emphasis on the static pose, grace and idealised proportions and features. During this period, the Neo-Classical style of sculpture flourished and figures of Venus based on antique originals were used to ornament a variety of objects made in a wide range of materials, from clocks, candelabra, wall appliques and inkstands in gilt bronze, patinated bronze, marble, alabaster and wood as well as sculptures from small statuettes to reliefs and plaquettes and large floor standing figural sculptures. For example, this beautiful bronze figure of the Venus Callipyge is derived from the ancient Roman marble and depicts the goddess lifting her light gown to reveal her hips and buttocks. Venus Callipyge translates literally as the Venus with the beautiful buttocks and here the use of the goddess character legitimises the sculptor’s focus on an erotic theme and rather gratuitous display of flesh. This bronze, like many examples of Grand Tour sculpture, is a direct copy of a Roman marble dating to the 1st century BC., itself a copy of a now lost ancient Greek figure of Aphrodite. 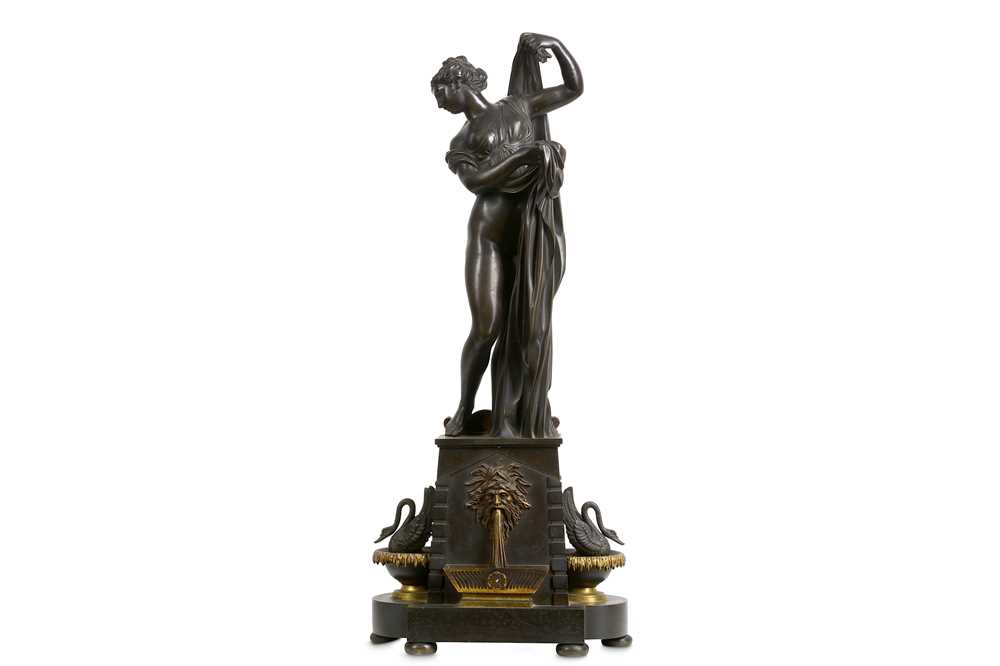 By the early 19th century, the enthusiasm for classical art reaches its peak in the French Empire period and this gilt bronze Empire clock dating from the early 19th century also features an eroticised depiction of Venus. Semi-nude, her dress has fallen to expose her breasts as she beats Cupid on his bare bottom with a sprig of roses. Here the theme of Venus as the goddess of love is used to justify a somewhat risqué scene which works well combined with the staid and grand classical style of the clock. Clocks during this period were decorated with well executed bronze and gilt bronze figures; often of classical theme depicting gods and goddesses such as Apollo, Aeneas, Amphitrite and Psyche as well as allegorical figures such as geography or astronomy. Many of these extraordinary clocks also depict narrative scenes, sometimes based on famous paintings such as the Oath of the Horatii. 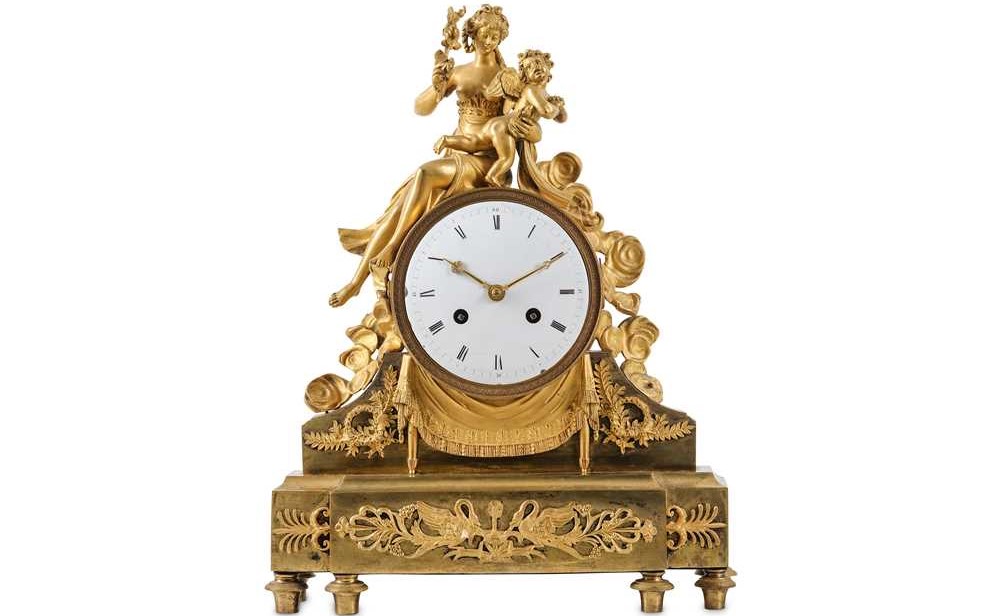 From the same period is this large neoclassical marble sculpture depicting Venus and Adonis, probably made around 1820. Venus is yet again nude except for her falling drapery, tied in a complex fold at her thighs to reveal her bottom, she clings to Adonis as he tries to remove her left hand. The sculptor has captured a moment in time and offers us a glimpse of a narrative, Venus is beseeching Adonis to stay with her and not to go hunting; he stands with his quiver of arrows ready to depart as she implores him to stay, her arm wrapped around his right shoulder and her face leans against him as he turns away to leave. According to Ovid's Metamorphoses, Venus fell madly in love with Adonis after being hit by an arrow from Cupid's bow, but sadly after this moment; her worst fears are realised when he was killed by a wild boar while hunting. This marble sculpture shows the influence of the famous neoclassical sculptors Antonio Canova and Bertel Thorvaldsen, Canova also produced a marble group of Venus and Adonis and Thorvaldsen’s Cupid and Psyche depicts the couple in a similar pose. The use of marble for these large-scale works gave the sculptor an opportunity to demonstrate his exceptional skill, representing soft flesh in the most hard and crystalline of materials and capturing a transient moment in a material that will stand the test of time and like the ancient Roman marbles that had such an effect on the sculptors of the 17th, 18th and 19th centuries, these works will continue to be admired for another two thousand years. 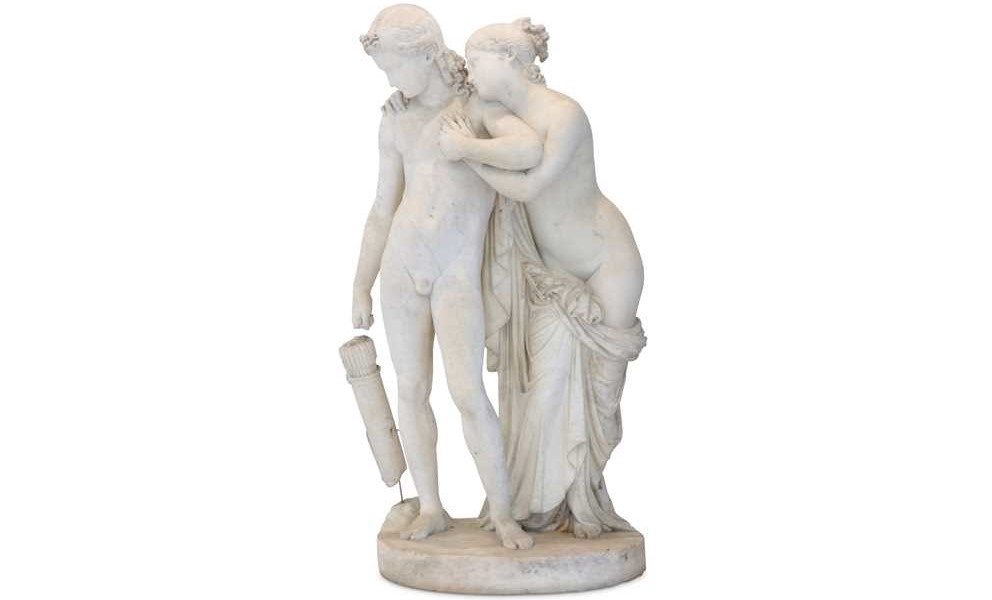 If you would like to consign to our next sale, The Collector: Objects to Clocks on Tuesday 30 March, get in touch with Head of European Works of Art and Clocks, Rachael Osborn-Howard.