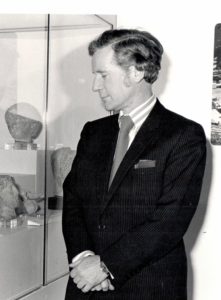 James Chesterman's interest in antiquities started in the mid-1960s; his first acquisition was a little Sicilian Archaic head dating to the 5th century B.C., purchased for 37s 6d in the Portobello Road. James had a particular interest in terracotta’s, finding them to be a charming reflection of a now lost world, he regarded their diminutive size as an extension of childhood when miniature toys excited him.

Demonstrating a true collector’s spirit, James wished to share the private joy his collection had given him over the years by exhibiting his entire collection of 120 terracotta’s in eight cities both in the UK and Germany between 1978 & 1979, entitled ‘Greek Gods and Goddesses in Miniature’.  Over the years James published articles, both on his collection and on the subject of collecting. Some of his collection had previously been exhibited at Birmingham in the City Museum and Art Gallery in 1968.

In his 1974 book, ‘Classical Terracotta Figures’, he says; ‘I do not think one should just lock one’s possessions up in cabinets and gloat over them in privacy; they should sally forth into the world and be shared with others. So this book is also a labour of duty and will, I hope, allow my collection of terracotta’s to be enjoyed by a greater number of people than just myself and friends who are given the Greek tour of my cabinets.’

This collection was acquired by the Fitzwilliam Museum Cambridge in 1979, a museum he loved in a city he loved.

James continued to collect antiquities in the years that followed and he took great care to note where and when he purchased his antiquities and kept an inventory and in most cases, a collector’s note card. Many of the original purchase invoices and dealer catalogue details have been retained. James did his very best to behave in a responsible way, trying to keep all this information together before the digital age.

His collection, part of which we are selling in December, was largely displayed in cabinets and James spent hours handling the objects, researching them, occasionally adding to or selling those that didn’t quite fit in with the collection and more often than not, simply enjoying having this ancient world in miniature around him.

James enjoyed the idea of his collection being catalogued and presented to a wider audience. He remained immensely proud that his first collection found a permanent home in the Fitzwilliam Museum but would have been more than happy to know that his second collection would eventually be enjoyed by new enthusiasts of antiquity.

Here are a few examples of the wonderful items from his collection, which we have coming up for sale on 7 December in the Antiquities and Tribal Art sale.

For more information on James Chesterman and his collection email me on abigail@chiswickauctions.co.uk