The Arts of Iran: the Intriguing Origin of Gold-damascened Steel Animal Statues

In preparation for our upcoming Islamic Art: From a European Private Collection on 22 July, Head of Islamic & Indian Art, Beatrice Campi discusses the narrative behind gold-damascened steel statues unique to the Qajar period.

The Qajar era is renowned for the vast and highly-skilled production of gold-damascened steel vessels and ornaments. Steel (pulad) was widely available in Iran and had been in use in these lands since the Pre-Islamic period. Until the 18th century, this material seems to have been used solely for the production of arms, a few ornaments, and architectural elements – choices based on its practical implementation, given its durability and strength (G. Fellinger, in L’Empire des Roses: Chefs-d’oeuvre de l’Art Persan du XIX siècle, Louvre-Lens, 2018, p. 377).

In the 19th century an unprecedented boom and real evolution of shapes and designs was witnessed. Not only was the variety of vessels greatly expanded, but also the quality of their making and design. Metals and ceramics started inspiring each other once again, allowing new shapes and revised concepts to enter the Qajar metalworkers’ artistic vocabulary. Chinese and European porcelain vessels, which were very sought-after and collectable commodities in the Qajar times, provided the perfect inspirational model to challenge the Iranian craftsmen’s skills and imagination (ibidem). 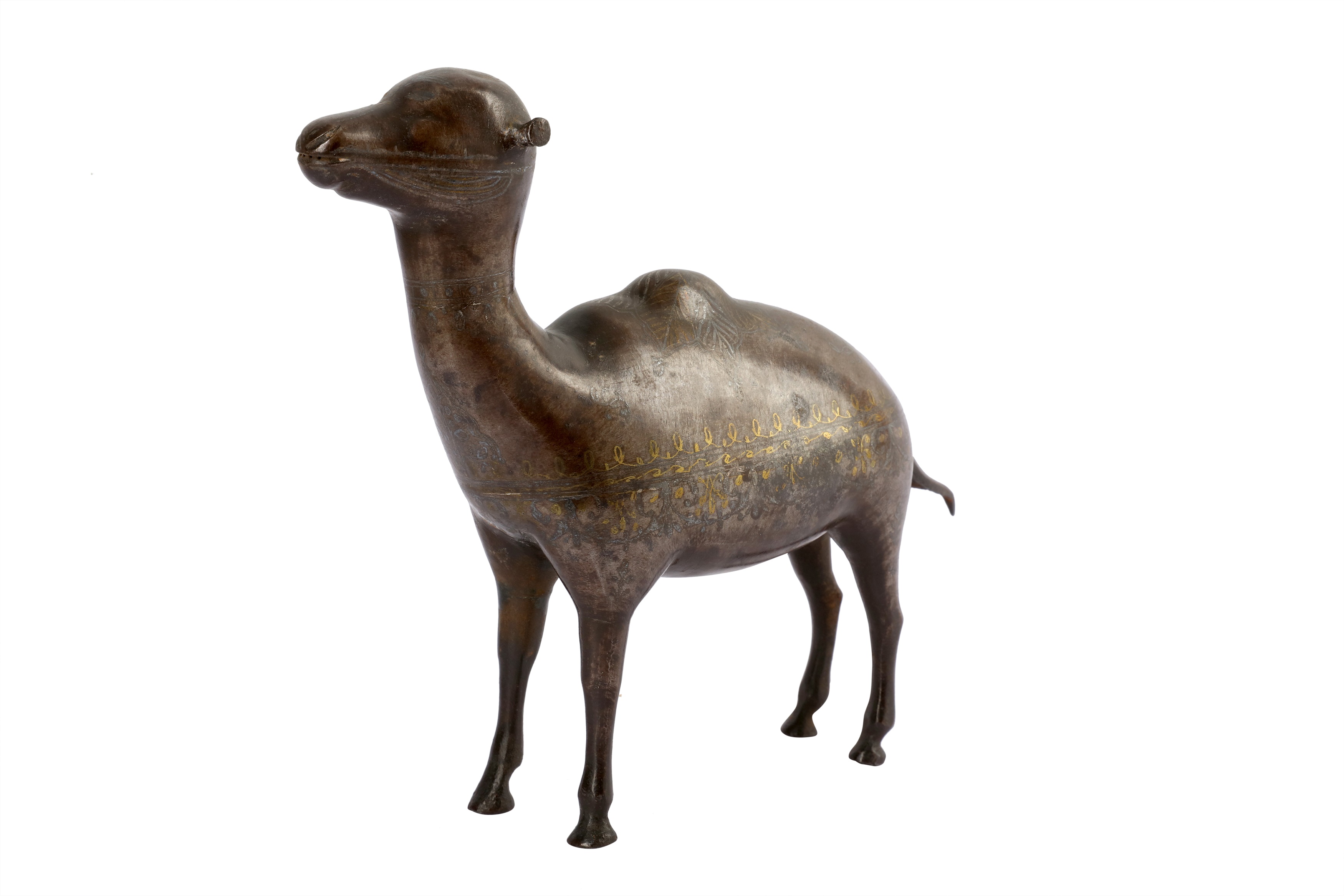 One of this period’s most beloved creations is the production of gold-damascened bird-shaped and zoomorphic statuettes. From peacocks, doves, and ducks to deer, camels, elephants, cats, lambs and mythical buraqs*, the zoomorphic artistic vocabulary knew no limits (A. Collinet, in L’Empire des Roses: Chefs-d’oeuvre de l’Art Persan du XIX siècle, Louvre-Lens, 2018, p. 92). The style of some statuettes showed naïve and stylised features, but the vast majority surprised the beholder with enhanced naturalism and dynamism, detailing an unexpected understanding of the represented animals’ bodies.

Often made in pairs, these statues were very much appreciated by European travellers and diplomats, who purchased them as decorative objects, detached from their cultural and devotional significance. A statue of a lion might not mean much to a Western beholder, but would have immediately reminded the Iranian audience of the Qajar dynasty’s emblem of the lion with the sword (shir-o-shamshir) and of ‘Ali, the first Shi’a Imam, and his title Asadullah (Lion of God) . 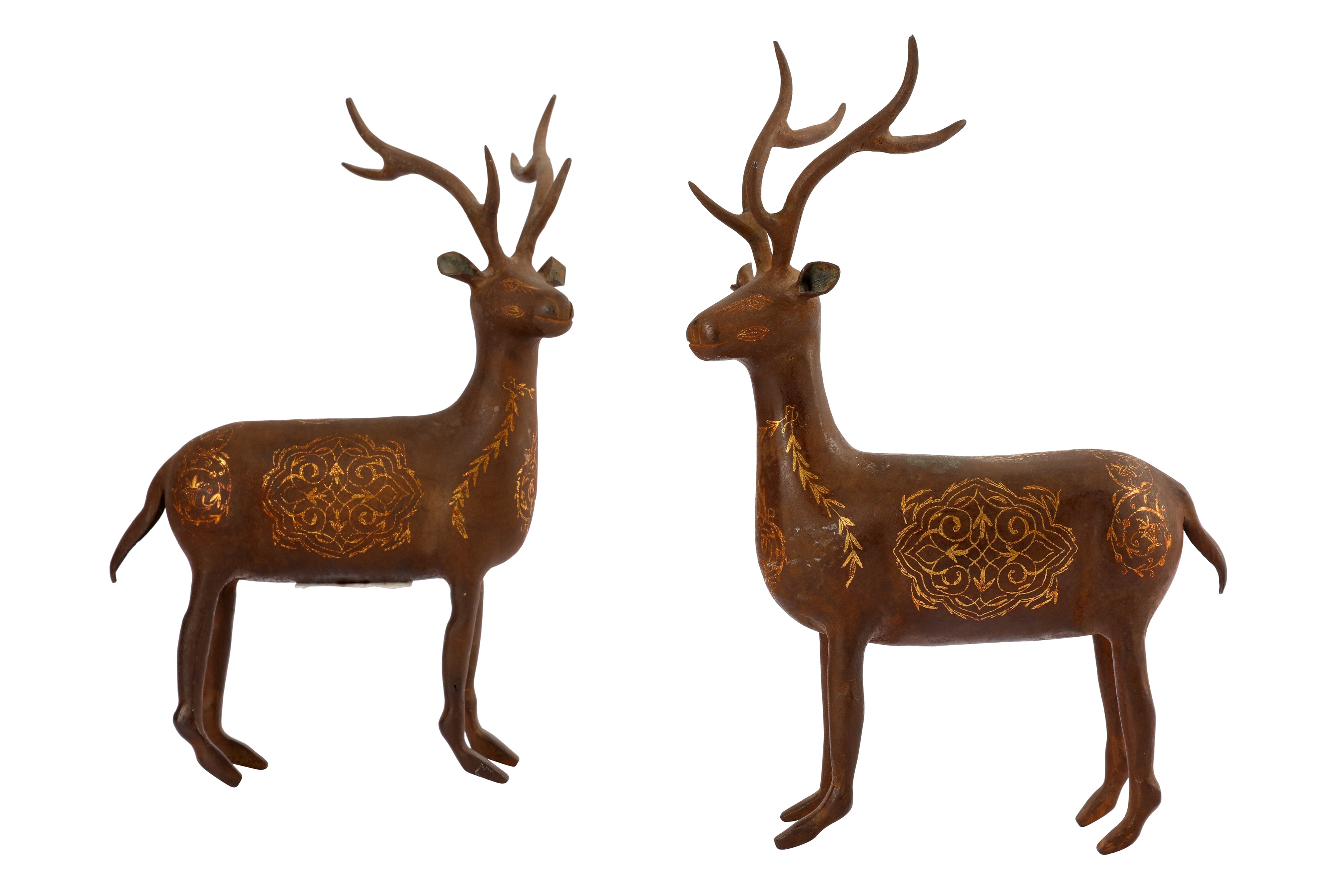 So what was the primary use of these zoomorphic statues in Qajar Iran? According to Collinet, their purpose was to decorate and embellish the ‘alams (devotional standards) used during important ceremonies and processions, with the most important planned for the month of Muharram, commemorating Hussain’s martyrdom in Kerbela (ibidem, pp. 92-93). The choice of animals was far from casual and take on a completely different allegorical significance in the minds and eyes of Shi’a believers: the camel becomes a symbol of the Prophet (see Fig. 1, a lot from our upcoming sale); the lion of the Prophet’s cousin and first Shi’a Imam, ‘Ali; the peacock of the Mahdi, the last Imam who entered the state of ghayba (occultation); and the deer of the Eighth Imam, Reza, the Imam-e Zaamin (The Guarantor) (see Figs. 2 and 3, two lots from our upcoming sale). 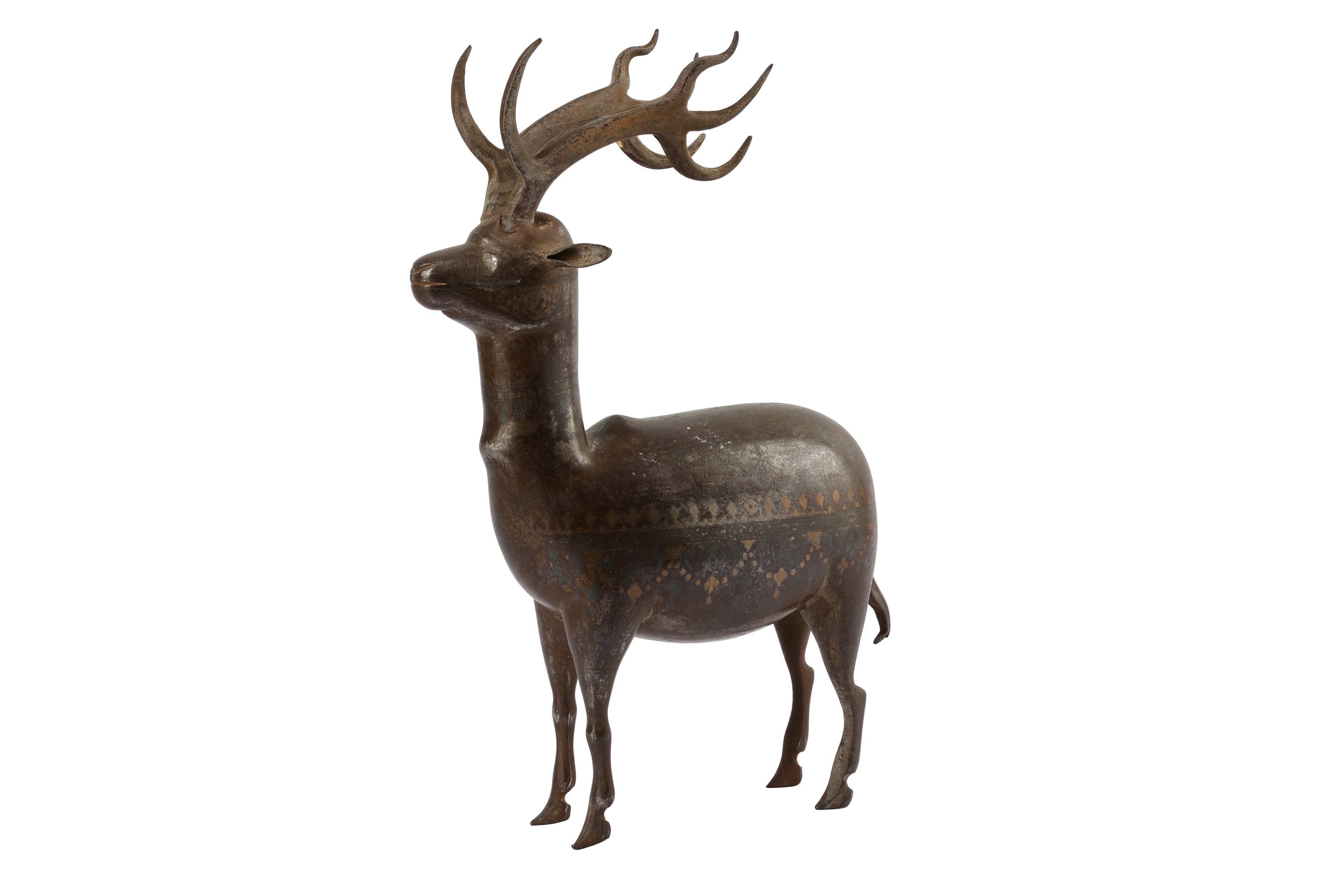 The allegory of Imam Reza as a deer is particularly dear to the Iranian beholders. It harks back to the time when the Imam was travelling from Medina to Khorasan and he prevented a hunter from killing a deer, which was bearing food to its babies. It was agreed the hunter would let the deer go on that instance and the deer would come back, once the babies were fed. The hunter agreed unwillingly to the Imam’s plan, believing the deer wouldn’t return; but when the deer showed up with its babies, the hunter was mesmerised by this miraculous event and chose to set the deer and its babies free as a mark of respect to the Imam.

These steel animal sculptures are far from just beautifully-accomplished decorative statuettes; they are tangible mementos of the most important Islamic spiritual figures in the Shi’a religious paradigm, inspiring their moral qualities in the beholders and acting as a catalyst, as an eschatological bridge between two worlds, the concrete and the symbolical-devotional.

Our upcoming Islamic Art: From a European Private Collection will take place on Wednesday 22 July at 1pm. Please contact, Head of Islamic & Indian Art Beatrice Campi, with any questions about the sale.

* The Burāq is a creature in Islamic tradition that was said to be a transport for certain prophets.