The Art of the Tea Tray 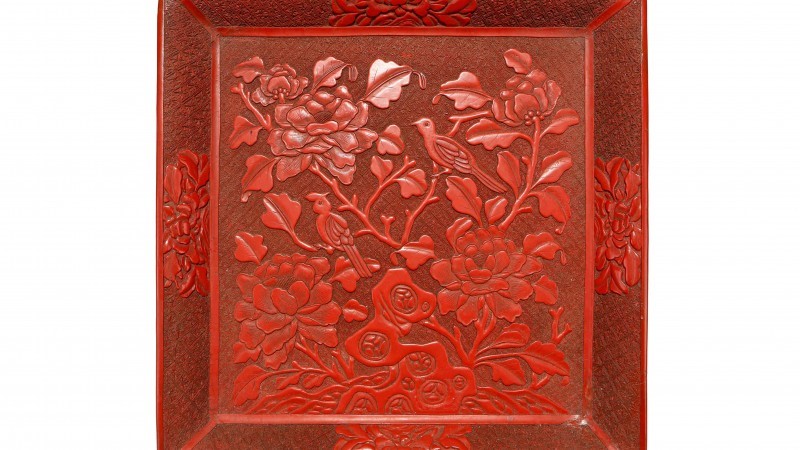 The tray, like other aspects of tea-drinking paraphernalia is an art-form borne of necessity. Ranging from the saucer (lot 355), an individual support for a single cup, to objects capable of supporting a whole tea service (lot 358), the tray offers a unique combination of three dimensional form and two dimensional surface. This surface, usually framed within a decorated rim, can be carved (lots 350 and 352), painted (354), inlaid with mother of pearl (351), silver (358), brass and copper (353), or even left blank to draw attention to the natural qualities of the material (356 and 357).

Lot 350: A CHINESE CINNABAR LACQUER BIRD AND FLOWER TRAY. Late Ming, early 17th Century. Of square form with canted corners, shallow everted sides supported on a broad foot and slightly recessed base, the interior carved and incised through layers of rich cinnabar lacquer with a pair of birds among peonies above a gnarled rock, the sky incised with floral diapers which continue over the sides at the centre of which is a peony flower head, 35 x 35cm. Literature: For a closely related table screen see Dragon and Phoenix: Chinese Lacquer Ware: the Lee Family Collection, Tokyo, 1990, cat no 72.

Lot 351: A CHINESE MOTHER OF PEARL INLAID LACQUER TRAY. Ming Dynasty, 16th Century. Of rectangular form with everted rim supported on a short foot, the interior decorated in mother-of-pearl with six boys at play under pine and flowering prunus branches, within a border of bird and flower panels against a diaper ground, 28.5 x 48cm. Literature: A mother of pearl inlaid lacquer tray of similar form may be found in Chinesische Lackkunst. Eine deutsche Privatsammlung, 2010, cat no 36, however, the treatment of the figures most closely resembles the table top of cat no 38, they dated the former as 16th Century, the latter 16th / 17th Century.