Ahead of the Silver and Objects of Vertu auction on 19 July, Silver specialist Amicie de Villenfagne explores the art of snuff in Europe. 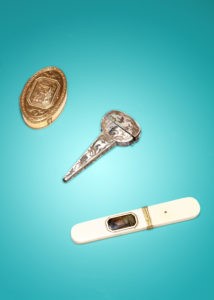 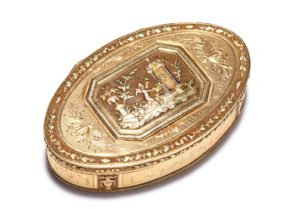 Tobacco was first introduced to Europe in the 15th century and was used as an ornamental plant at the Spanish and Portuguese courts. A century later; the King's personal doctor began prescribing tobacco as a medicine for colds, asthma and other ailments. Jean Nicot (1530 - 1604), the French Ambassador to Portugal, introduced this novel remedy to the French Court where it supposedly cured Queen Catherine de Medici's son who suffered from migraines. Since then, the plant has been called Nicotiana tabacum in honour of Jean Nicot.

Initially only dispensed by pharmacists, the use of tobacco gradually shifted from medicinal to pleasure. Smoked in a pipe to begin with, the consumption of tobacco became widely popular in the form of snuff: a fine and often flavoured powder. Its fragrant powder saw it adopted by the whole country as a convenient way of disguising bad smells in the street.

Customary for both men and women, tobacco was chewed by the bourgeoisie and snuffed by even most elegant of aristocrats. The 'art of snuff' quickly found its way into the finest European salons. Snuff was kept in specially made boxes of various materials, forms and sizes depending on its use. The pocket snuff box, for example, ought to be flat, small in size and airtight to avoid humidity when out and about.

It was the fashion to match one’s snuffbox to one’s mood and outfit as well as to the occasion. Responding to the demand, the mid-18th century saw the rise of specialised artisans whose craft was dedicated to the production of snuffboxes. Often decorated, some particularly precious examples were made in gold, which was engraved and chased and set with stones. Others were made in porcelain, enamel, agate, tortoiseshell, ivory or painted. For a fine example of a tri-colour gold snuff box see Lot 62 in the sale.

This new accessory quickly became a status symbol and was popular to give as a token of love or friendship or as a marker of military or diplomatic merit.  Towards the late 18th century, tobacco became accessible to the middle and lower classes. Catering to this new consumer, large quantities of silver boxes were produced in Birmingham by the likes of Samuel Pemberton, Edward Smith as well as Nathaniel Mills who specialised in depictions of idyllic scenes of castles and national landmarks. For a fine example of a Birmingham snuff box see Lot 80 in the sale.