The past week has seen three hugely successful sales for our Islamic & Indian Art Department, with many top lots achieving hammer prices well above their estimates. 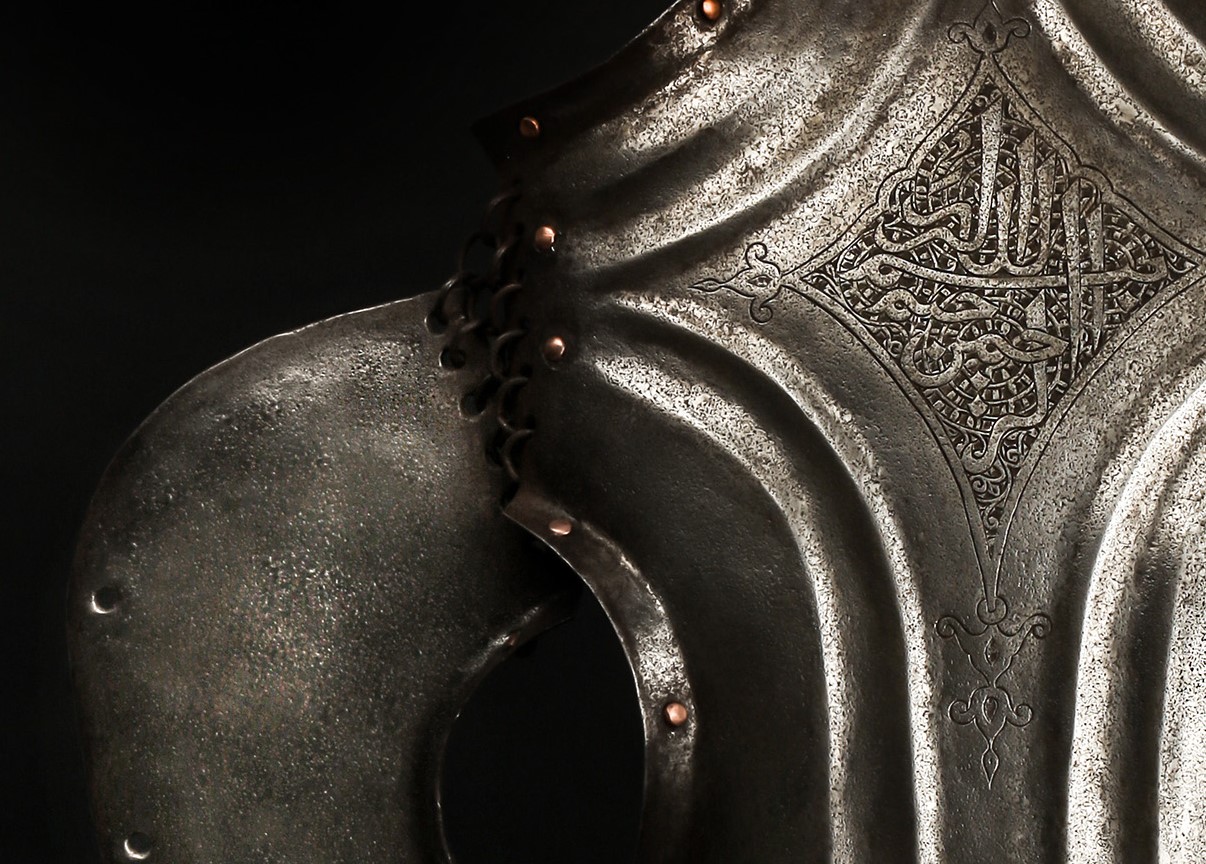 The engraved steel shaffron which sold for £13,750.

The top lot of Friday 29 October’s Islamic & Indian Art sale was a 20th century talismanic shirt which sold for a staggering £22,500, including Buyer’s Premium – 30 times more than its low estimate of £600.

The following two top lots were both more than double their low estimates. A brass mamluk hanging lantern, from the 14th or 15th century, sold for £17,500 and an engraved steel shaffron sold for £13,750, both including Buyer’s Premium. The shaffron had also been shortlisted for the Outstanding Islamic/Indian Work of Art from an Auction House at this year’s edition of Asian Art in London.

On the morning of the Islamic & Indian Art sale, the Department also held a single owner sale of Islamic Art, Property of a European Collector Part II. The sale sold 282% by value and 88% by lot, and the top three lots all sold for more than 10 times their low estimates.

This was followed by a pair of Qajar Achaemenid-revival repoussé silver vases, decorated with illustrations of scenes inspired by Persia's glorious past, which went for £12,500 including Buyer’s Premium, against an original low estimate of £800. The next was a lacquered papier-mâché pen case (qalamdan), illustrating the mythical kings of Iran, which sold for £11,875, including Buyer’s Premium, over 30 times its original low estimate of £300.

Head of Department Beatrice Campi said “These Islamic, Iranian and Indian art auctions were some of our most successful to date, featuring a greatly varied and intriguing selection of lots which yielded incredible results especially in the sections of the arts of Iran, Early Islamic Art and Textiles. Auctions like these prove not only the ability of our specialist team to source, accurately research and deal with special lots from both the Islamic and Indian lands, but also to sell them on behalf of our vendors for great totals, often exceeding of several times the current market estimates.”

Hot on the heels of these two sales, the Department then held its third edition of the A Middle Eastern Journey auction, on Wednesday 3 November. This is an auction that draws on our wide range of departments, themed around topographical and ethnographic items that take you on a journey through Middle Eastern art, history and culture.

The top lot was a landscape painting of the Indian city of Lucknow from the Gomti river, which sold for £9,375, including Buyer’s Premium. Likely painted by a British artist in the early to mid-19th century, this lot speaks of an era when many British individuals chose to settle in the city of Lucknow in India, including several landscape painters, who then went on to set up local Company Painting schools.

The second top lot was another to achieve a price well above its estimates – two pietra dura panels, inlaid with a variety of colourful hardstones including jaspers, marbles and agates, which sold for £8,750, over 10 times its high estimate. The complex decorative art of pietra dura inlay is a technique in which highly polished coloured stones are cut and fitted onto a hardstone panel to create images, first seen in Ancient Rome.

Beatrice Campi, the Head of Sale, said “Our third edition of A Middle Eastern Journey sale proved yet again how successful and engaging cross-cultural and multi-departmental auctions can be. Five different departments at Chiswick Auctions engaged in this year’s edition, each of them sourcing lots from different vendors and reaching out to a diverse pool of both UK-based and international clients.”

“In the next edition in 2022, we hope to involve even more departments aiming to make this auction a true ‘hot pot’ of expertise and cross-cultural influences.”

For more information on these sales or future ones, please contact the Head of Department, Beatrice Campi  beatrice.campi@chiswickauctions.co.uk