Tales of the Queen Mother’s Port

and the Head of Wine & Spirits

Port first became popular in the UK in 1703 during the war with France. Merchants were authorized to import it at a low duty, to satisfy the deprived English wine drinkers, who had a taste for drinking French wine. British Merchants began to invest more and more into the Port industry, including the likes of W. & J. Graham’s who founded their firm in Porto, in 1820. Graham’s has an outstanding history of producing some of the finest vintages for well over a century, with remarkable rich flavours. You can therefore imagine my excitement when last month I was able to get my hands on a very old and rare bottle in Margate, on a very wet and cold day…

Margate is a beautiful seaside town, although some of its charms are dampened when it rains. The rain was that kind of all-pervasive mist that doesn’t soak you to the bone but does suck all the warmth from you the second you step into it. After navigating the winding backstreets, I stepped out, and instantly wished I’d worn a thicker suit. But I did up my jacket, to stop the wind trying to whip it off my back and continued on my way.

The Port I was here to collect was at a venue across the road, a venue I knew the name of, but I’d never actually been to until today. So, I was a little confused to see what looked like a bus stop on the opposite side of the road with ‘The Winter Gardens’ above it and absolutely nothing but a fenced off garden behind it, and beyond that the sea. I crossed the road and peered into the garden, which was a crater, and in the crater was a theatre. The bus-stop I’d seen had double doors in its back wall that led to an enclosed staircase and down to a reception area.

I was introduced to Paul, who had contacted me about three cases (and five bottles) of Graham’s 1977 and after introductions, was offered to try one of the bottles (looks like I’d only be collecting four bottles). We sat at a table by the window with four port glasses and a half full decanter and he poured me a glass, explaining they thought it might be best to taste it to make sure it was still drinkable.

Drinkable isn’t the word, it was luscious. Smooth, with the last hurrah of thick tannins lining the tongue and laying down a plush carpet for the chewy fig and lingering acidity to mingle on. With them came a hint of smoky and chocolatey notes, the smell of cigar boxes, and freshly sanded wood. 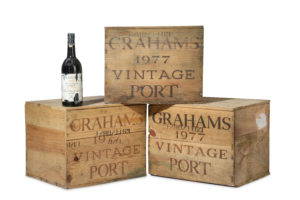 The tale of the ports is brilliant, in 1983/84 (no one could remember which one), the Queen Mother had been the esteemed guest of the venue for dinner. They were instructed that they had to have Vintage Graham’s on hand for her. Either the food and beverage manager wanted to make sure she was well catered for, or he thought she could imbibe her own body weight in port, but too many cases were ordered. Due to either zealous over-ordering or her Majesty having an off day, much of the port remained undrunk. It proceeded to feature on 35 years-worth of stock counts before the food and beverage manager finally retired and the new incumbent thought that maybe it was time to sell it on. In the bar it would have cost around £70 per glass, which might have proved quite a hard sell, so instead the decision was made to auction it.

After finishing my glass of Port, I asked to see the cellar and was duly led behind the bar with its luscious crimson floor and down a small hatch leading onto chalky steps. The steps shed a layer of dusty white powder with every step and soon I was in a room with dusty white walls. The cellar was carved out of the cliff face when the venue was built in 1911. It’s surrounded by thick chalky stone, which runs under the car park, and presumably if you were to dig a few meters further out, you’d be looking onto open water. As far as cellars go, it was ideal, a constant temperature, heavily insulated, no natural light and not too dry.

The port shared a locked cage in the cellar with cases of Gadd’s beer from the Ramsgate Brewery and large formats of Vodka, Gin, Whisky and Rum, all of which turned over on a weekly basis to satisfy the thirsty visitors to Kent’s largest entertainment space. As I surveyed this beautiful but bustling cellar, all I could imagine was one of those sped up videos where everything else was brought down to the cellar, stacked, racked or wheeled into storage and all the time these three cases of port sat, unmoving for 35 years. It is now these cases time to shine, to get their moment in the spotlight and finally be appreciated ahead of all the fly-by-night, built for quick-consumption compatriots that have sped past it.

So, some months ago, out of the blue I got an e-mail. It started innocuously enough asking if we auctioned port. A very brief e-mail, and it took several months for them to get the go ahead. But, the culmination of this long story, starting with the queen mother in 1980 not drinking the three cases of port intended for her visit and culminated in a very wet miasma of salt tinged rain, a glass of the most wonderfully stored port I’ve come across to date, and the cases loaded into the boot of my car ready to be auctioned off in December, where it will finally achieve a moment in the spotlight.

The estimate of the Graham’s 1977 Port is £700 - £850 and will be sold in our Wine & Spirits auction on 5th December, 11am. For more information contact Head of Wine, Sam Hellyer: sam.hellyer@chiswickauctions.co.uk