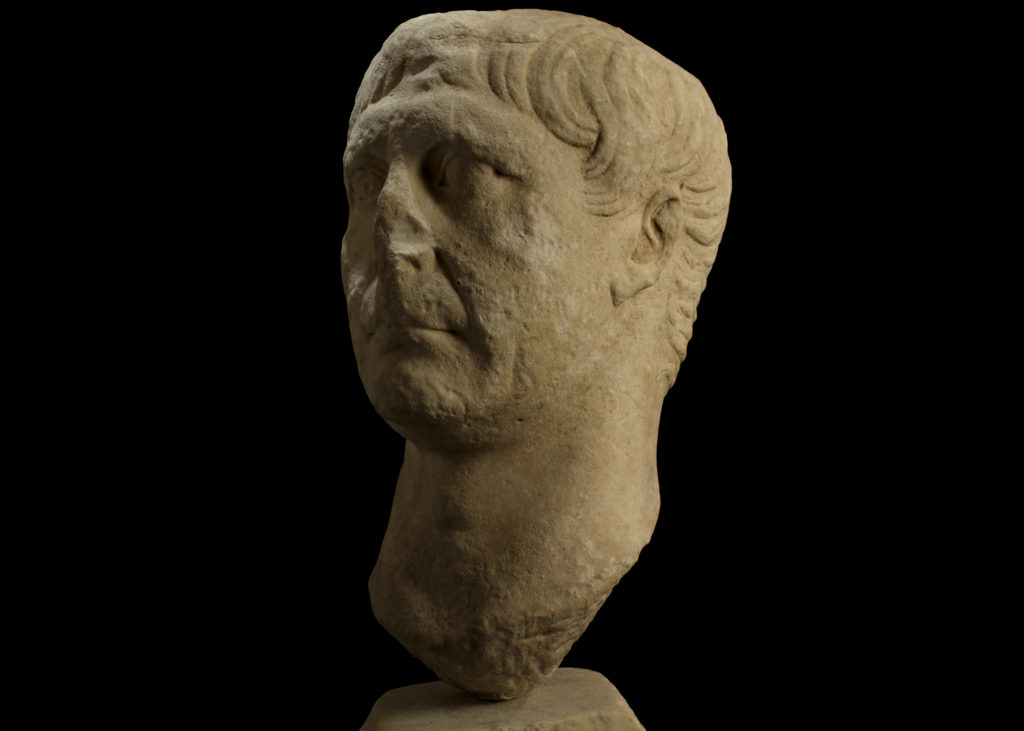 This remarkable Roman Marble Head Portrait of  Emperor Trajan (c. 98-117 A.D.) depicts the thirteenth emperor of the Roman Empire with pursed lips, a stern expression, furrowed brow and his iconic ‘bowl’ haircut that sweeps around his ears and gives heed to the idealised look of Augustus.  Trajan is captured as austere, yet stoic and his dignified appearance is wholly expected of a Roman Emperor.

Trajan’s family settled in Hispania Baetica, part of modern day Spain, which made him the first Roman Emperor to be born in a Roman province rather than Italy. Emperor Trajan made impressive advances in the expansion of the Roman Empire, the transformation of Rome itself ( the most memorable being his well-known victory column, commonly referred to as Trajan’s column that still stands today) and the reputation of Roman Emperors. Trajan’s column has become synonymous with both his military excellence and artistic innovation.

Trajan’s markets, a large complex of ruins in Rome located on the Via dei Fori Imperiali and across from the Colosseum, are another distinguished part of the inventive construction programme achieved during his lifetime.

As a military man, Trajan commanded a vast and powerful army and during his rule the Roman Emperor was at its largest, spreading as far as Mesopotamia and Armenia.

Trajan’s popularity was evident when the Senate officially named him optimus, meaning ‘the best.’ He became a model example for future emperors and they were inaugurated with the phrase:

‘May you be luckier than Augustus, better than Trajan’

It is likely that this head portrait was a public commission on display for all to admire and if attached to a body, it is likely that the figure would have been wearing a toga or cuirass (armoured breastplate.) It is difficult to assess whether this head portrait was originally attached to a bust or body, although the length of it suggests that it was as heads were often created separately in case the figure depicted fell out of favour.

Although Trajan does not provide us with the scandalous anecdotes of Nero or Tiberius, he symbolises stability after a long period of turbulence and his memory endures, appropriately immortalised in a 98 feet tall column that continues to dominate Rome’s cityscape.

Trajan died suddenly on 8 August 117 while he was in Selinus, now modern day Turkey. He was later returned to Rome, cremated and buried, appropriately, under one of his most esteemed achievements: Trajan’s column.