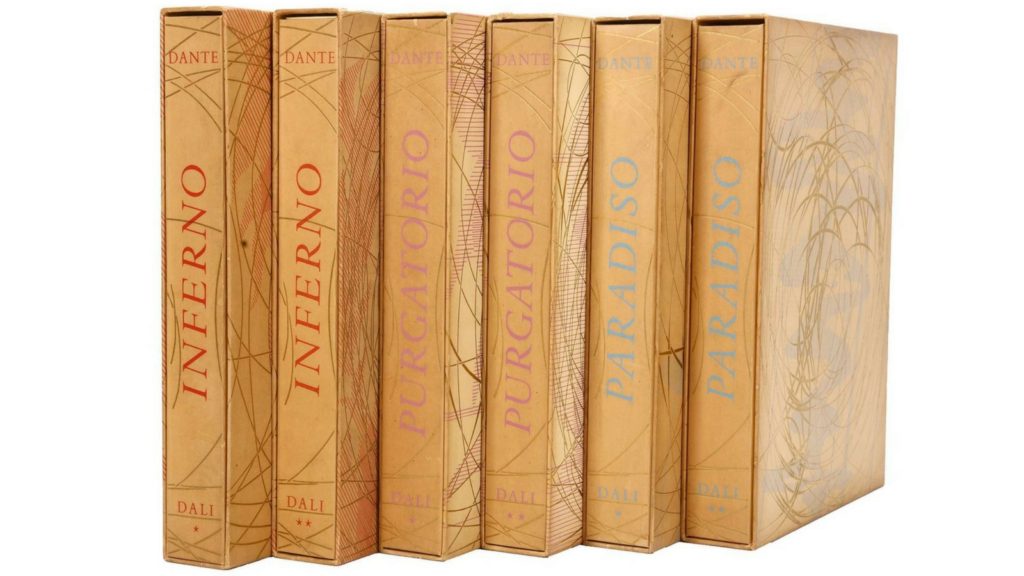 'This divine work is not plastic, not picturesque, not musical, but all these at once and in accordant harmony. It is not dramatic, not epic, not lyric, but a peculiar, unique and unexampled mingling of all these.' F.W.J. Schelling, 1802-03.

Ahead of the Printed Books & Manuscripts auction on 27 September, Assistant Specialist Carmen Donia takes a closer look at Salvador Dali's response to the greatest literary masterpiece written in Italian  - Dante Alighieri's epic Poem, The Divine Comedy, through 100 colour woodcuts offered in the sale. The Divine Comedy records Dante's visionary journey through the triple realms of Inferno, Purgatory and Paradise, led by another poet Virgil. This series of woodcuts reproduced Dali's illustrations in watercolour and ink that the artist was commissioned to complete in 1957 by the Italian government to mark the 700th anniversary of Dante's birth in 1965. They were to then be reproduced and released in limited print editions. By the time Dali had finished, he had produced 100 illustrations.

When the first of Dali’s illustrations was put on view at the Palazzo Pallavicini in Rome, the Italian public were widely disappointed that the celebration of a national icon was assigned to a Spanish rather than Italian artist. The commission was cancelled, although Dalí finished the project and two engravers, Raymond Jacquet and his assistant, Mr. Taricco, overseen by Dalí and Jean Estrade, artistic director of Parisian publisher Les Heures Claires, were hired to hand carve the 3500 wood blocks necessary to reproduce the watercolours. These illustrations recounting Dante’s allegorical journey were exhibited at the Palais Galliera in Paris.

Dante's Divine Comedy has deeply influenced literature and the visual arts across the Western world, from Renaissance debate informed by Aristotelian theory to Romanticism and beyond.

'Widely considered one of the most eccentric and prolific artists of the 20th century, Dalí is known for his exuberant and multidimensional surrealist style. He was heavily influenced by Sigmund Freud’s psychoanalytic theories, exploring symbolic dreams, sexual fetish and autobiographical imagery in his paintings, sculptures, ready-mades and mixed media works.' - Carmen Donia

The Divine Comedy has always been recognised as an example of universal poetry and art, subject to interpretations and representations through different media. Many poets and figurative artists over the past centuries have been inspired by the work, from Botticelli, William Blake and Gustave Doré to Renato Guttuso. But the most celebrated version was undoubtedly Dalí's.

'The illustrations feature many of his trademark images, such as elongated limbs and melting faces, bones perforating skin and cannibalistic metamorphoses.' - Carmen Donia

'Dali’s figurative reading transforms Dante’s poem into a surrealist text thanks to his personal method of illustration based on the application of Freudian mechanisms.' - Carmen Donia

Dante’s motifs of sin and redemption are represented as natural human drives. The style of the illustrations follows Dante's storytelling, ironic and grotesque in Hell and Purgatory, delicate and celestial in Heaven. In Hell is Minos, the judge examining the crimes on entrance; Cerberus, the strange, triple throated monster barking like a dog and the Wood of Suicides; in Purgatory The Fallen Angel is observing the drawers of his body (a quotation in the renowned 1936 Venus de Milo with drawers) and in Heaven The Angels and The Encounters of Dante and Beatrice.