Funds to go to The Wormwood Scrubs Pony Centre

Freud's 'Sketch of Goldie' provides a rare insight into how the artist embarked on canvas, first sketching his subject in charcoal then working it up with oil rags dipped in turps. The result is highly gestural: a canvas that possesses the physicality of a painting yet the delicacy of a drawing. Both image and line give clear vent to Goldie’s restless energy, while the work itself was Freud’s parting gift to his much-cherished Wormwood Scrubs Pony Centre and the warm welcome its founder and director Mary Joy Langdon and the community there always offered him.

To read the catalogue essay about 'Sketch of Goldie' please click here.

The Wormwood Scrubs Pony Centre is a registered charity providing riding and equine therapy to children, specialising in those with special needs and physical disabilities. Founded in 1989, it celebrates its 30th anniversary this year continuing its dedication to the mission of improving the quality of the lives of children and young people who attend it.

Over three decades a number of artists have been attracted by the centre’s horses, and between 2003 and 2006 Lucian Freud was its unofficial ‘artist in residence’. Setting up a temporary studio, Freud’s regular visits to the centre combined his love of horses, riding and painting. On eventually departing the stables Freud left behind him many of his professional accoutrements – his easel, the charcoal he used for sketching out his compositions, including on the present work, his brushes and palette, tubes of oil paint, the turps tin for thinning his paints, and bundles of the rags he used to wipe off paint from both canvas and brushes. He also left behind Sketch of Goldie. Sister Mary Joy Langdon, the centre’s founder has kindly shared her memories of Freud with us. 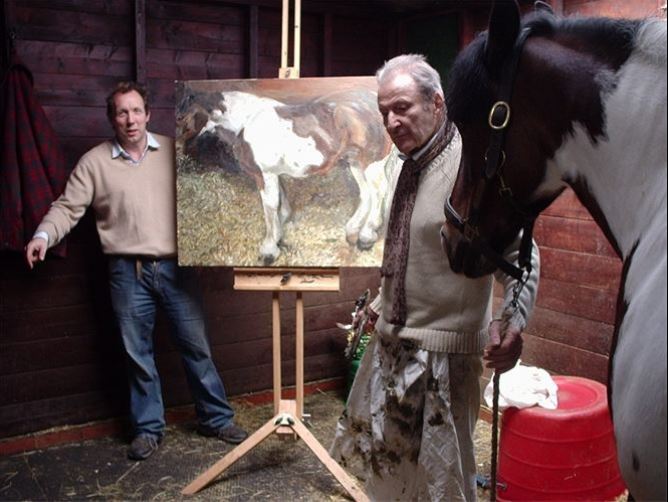 KK: Tell us about the first time you met Lucian, what was he like? How did he come across?

MJL: I first met Lucian in the stable yard with David Dawson. I showed him around and he seemed to be a very quiet gentleman. I also invited him to take a look at our equestrian library and whilst in there I offered him a book on how to draw horses. [Painting and drawing Horses by Jennifer Bell] At this stage I had no idea how famous an artist he was. He intently looked at the book, carefully turning over each page. He then passed the book back to me saying it’s very good. 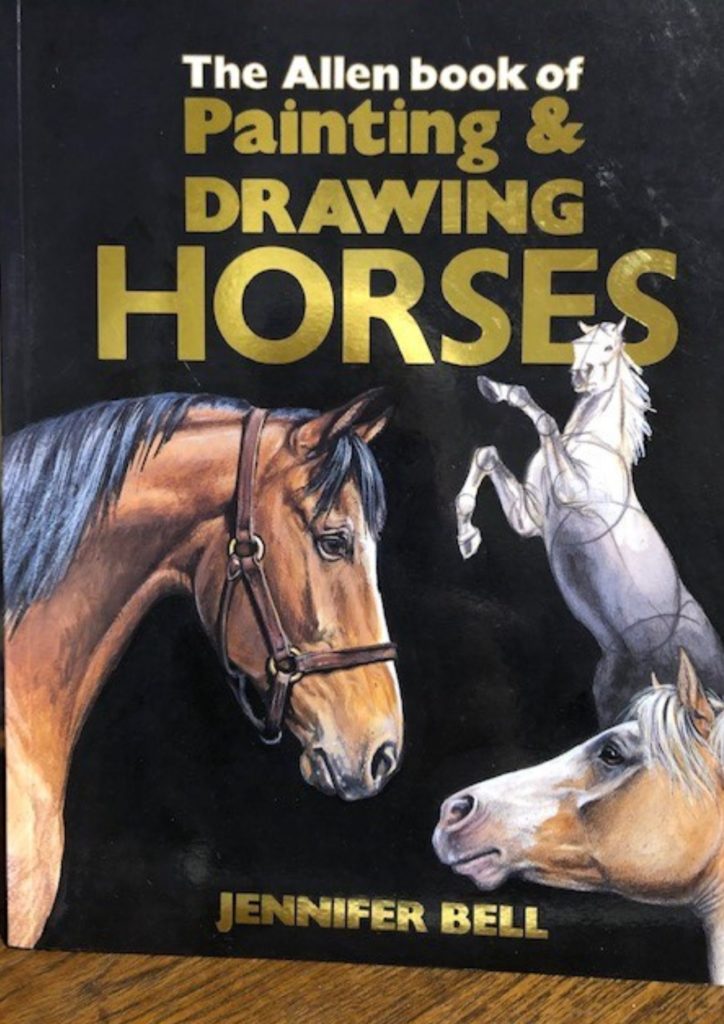 KK: What was his attitude to horses? Did anything make any particular impression on you?

MJL: Lucian wanted to paint an Arab so I took him to the back paddock where he met Releef who is a grey Arab. Lucian seemed keen on Releef despite me telling him that this horse was inclined to nip. He said he wasn’t ‘bothered by nipping’. Lucian was always relaxed in the presence of the horses. He would softly talk to them and the horses always seemed to enjoy the time being drawn and painted.

KK: Was Goldie the first horse he chose to paint?

MJL: Goldie was the second horse he chose following the painting of ‘The Grey Gelding’. Initially I was a little disappointed that he chose Goldie as I was hoping he would choose to paint Sioux, the skewbald mare. I could certainly understand why he chose Goldie as she was very beautiful and a stunning looking horse and a very different type to Releef the Arab. She looked a very strong and powerful animal with a long flaxen mane and tail. Goldie was a very independent horse with a strong will. Lucian commenced to work with her but after a few days he said Goldie’s personality didn’t suit him. He then left the sketch and spent time looking for another equine model. It was then that Lucian chose Sioux. I was delighted as Sioux was an extremely special horse to me. It was not long before Sioux also became a special horse to Lucian.

KK: What other horses did he paint? Did he have a favourite?

MJL: Lucian completed three paintings One of Releef ‘The Grey Gelding’, two Paintings of Sioux ‘The Skewbald Mare’, ‘Mare eating hay’ Sioux was definitely his favourite horse. She responded to him in a positive and interactive manner owing to Lucian’s quietness and love of horses.

MJL: Lucian came several times a week. It would always be in the morning as he said the light was at its best. During conversations with Lucian I soon learnt that he had always enjoyed being around horses. He told me, as a boy at school he would ride his friends’ pony without a saddle. I invited him to a ride and he rode Sioux several times. I believe he enjoyed being at the WSPC because as most people there had no knowledge of how famous an artist he was. This meant he could just freely be himself. On occasions he would hand over an envelope on which he had handwritten ‘For SIOUX’. This would be a donation for the charity.

Letter from Lucian Freud, 'For Sioux' containing donations for the centre

KK: What is your fondest memory of Lucian?

MJL: One day he came to my house to meet a fox cub that I had hand reared. The fox was so relaxed sitting on Lucian’s lap. Lucian seemed to appreciate this little wild animal who had given him permission to pet him. Following conversations with Lucian I soon realised what a truly honest person he was and of course this is seen in all his art. I can still hear his voice saying in the stable to Sioux, ‘Come on then’.

Personally, for me it was a great privilege to have known Lucian albeit only for a few years. I remember having a conversation with him about Leonardo da Vinci. At the time I was working through a book called How to think like Leonardo da Vinci. I was surprised that Lucian didn’t have the same enthusiasm as I did for Leonardo. We also spoke about George Stubbs paintings of horses. Lucian was also not a fan of Stubbs. It was also an incredible honour for Sioux and me to be invited by his family to attend Lucian’s funeral. Sioux stood at the back of the chapel during the service & then walked in front of the coffin to the graveside. Whilst I sat on Sioux near the grave, I watched a little fox sitting out of sight of the family mourners. This little fox appeared to be paying homage to a lover of creation. 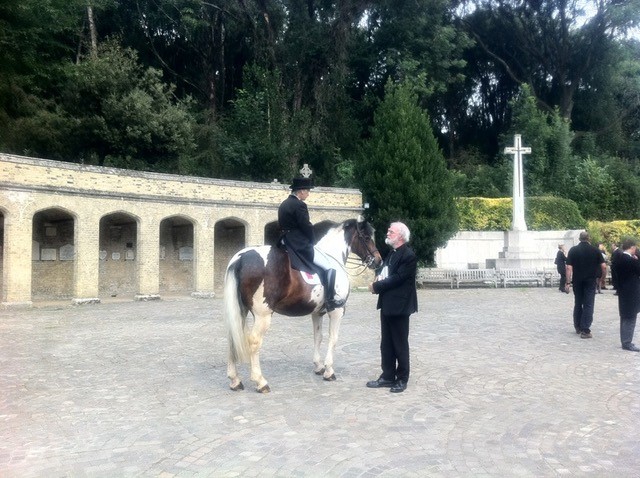 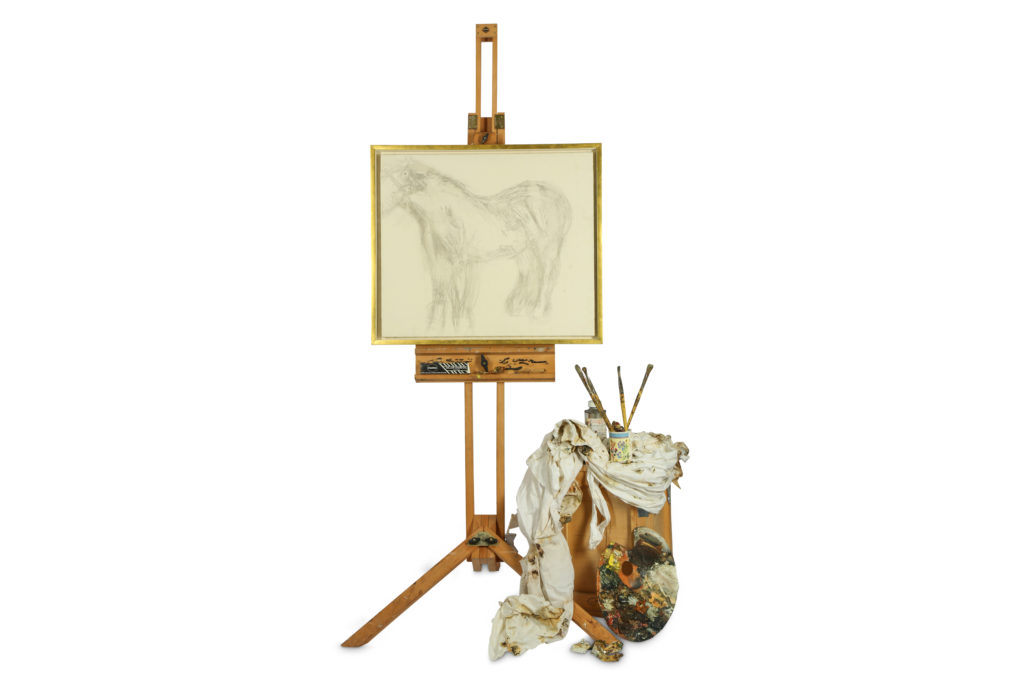 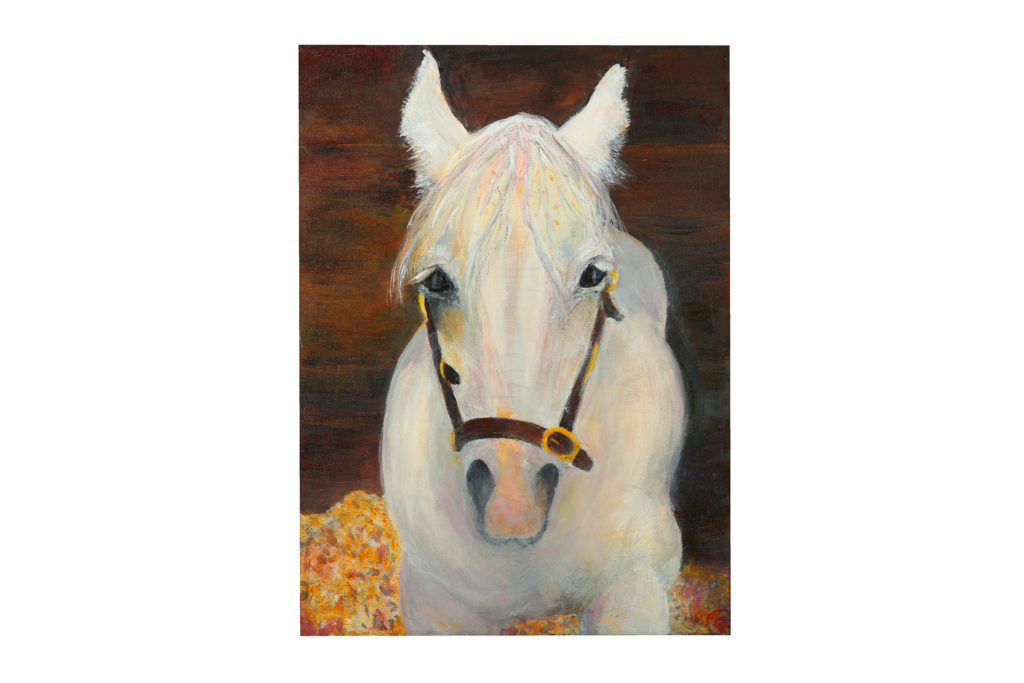 Lot 20. Romaine Dennistoun (B. 1946), Head of Releef. Dennistoun is currently working as an artist in residence at the Wormwood Scrubs Pony centre. The piece is an homage to Freud's Grey Gelding (2003). Estimate: £400-600.

Other lots by Freud 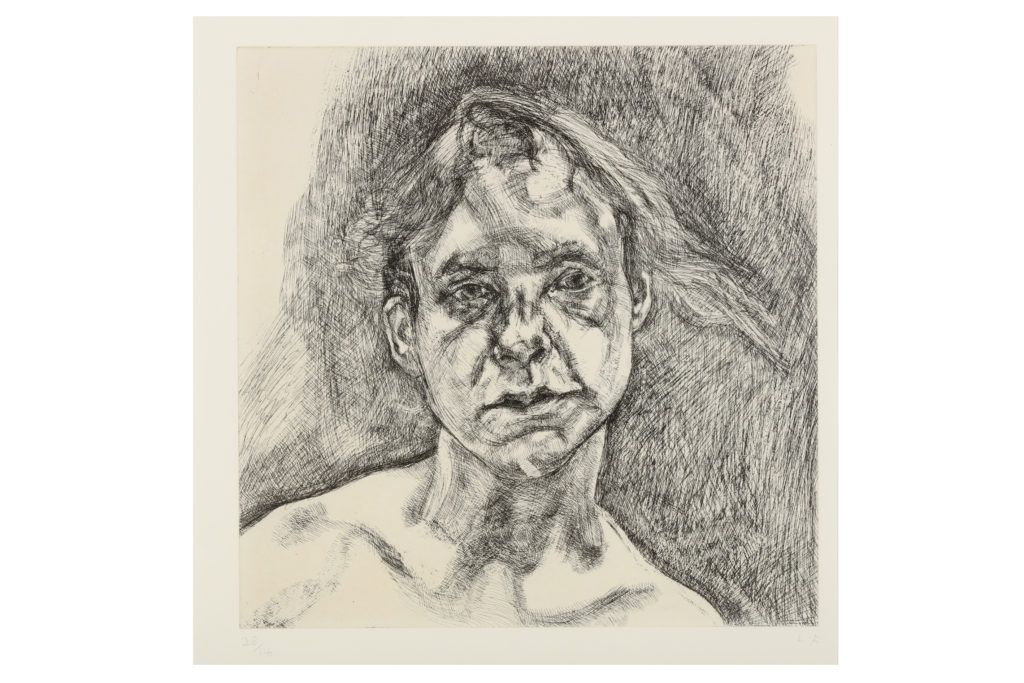 The featured lots will be offered for sale in our Modern & Post-War British Art sale on 3rd December, 2pm.