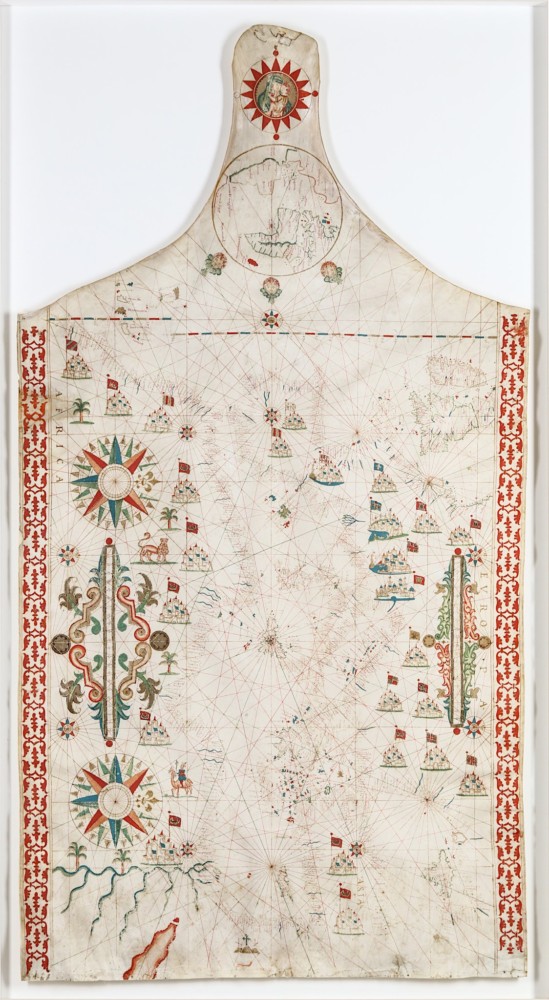 One of the most extraordinary advances in exploration occurred in the 13th century with the mysterious birth of the Portolan chart. Little is known of its origins, so the hypothesis among cartographic historians was that portolans were a product of the intersection between learned culture and the knowledge of medieval European sailors, possibly enhanced with older knowledge from Byzantine or Arab sources. Unlike earlier maps such as the medieval mappa mundi, which held religious significance and were schematic in design, the Portolan chart allowed sailors to accurately devise new navigational routes for the first time in history.

Deriving from the Italian word ‘portolano’, meaning a written description of Catalan and Italian ports along a coastline, portolan charts were based upon direct and first-hand observations by sailors with carefully drawn rhumb lunes radiating from compass roses that connected opposite shores by any of the 32 directions of the mariner’s compass. Omitting virtually all inland features, their remarkable accuracy allowed sailors to chart a course from harbour to harbour. Place names were written perpendicular to the coast, with the most important ports highlighted in red ink.

The demand for Portolan charts originated in a growing appetite for voyaging by sea. The burgeoning value of trade, which went hand in hand with the rise in national rivalries, meant that the charts became highly sought-after and sensitive documents, fiercely protected by the Portuguese and Spanish states who kept them under close watch from English or Dutch spies. 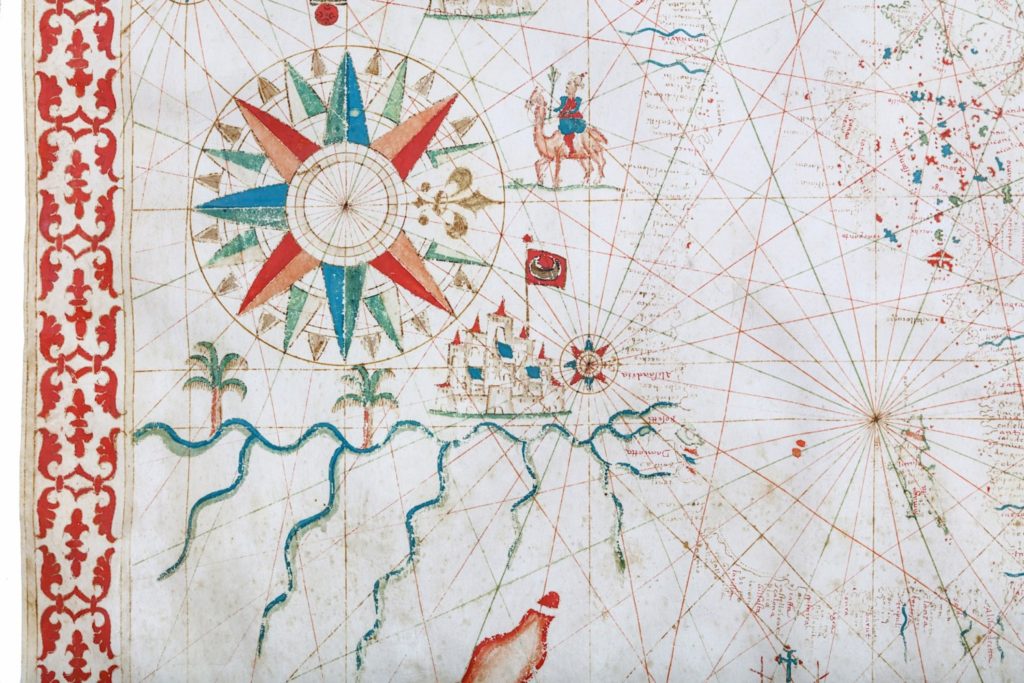 Largely produced in small family workshops and initially intended for navigation along the coasts of the Mediterranean and the Black Sea, Portolan charts developed to incorporate the Atlantic coasts of Europe and Africa and also reflected the discovery of new lands. Sailors, pilots and merchants used Portolan charts, as well as notaries who needed their accurate representation of far-flung lands when drawing up trading contracts.

Dating to the early 17th century, a rare and unusually extensive Portolan Chart by a member of the distinguished family of cartographers, Placidus Caloiro et Oliva, is offered in the forthcoming auction of The Warrens Library & A Fine Collection of Historical Maps & Atlases on the 28th March.

Catalan in origin, the Oliva family were active during the 16th and early 17th centuries. The family moved from Majorca to Messina in Sicily before 1500, which became one of the most important Mediterranean cities given its location and relationship with Naples and Malta. At least 16 members of the Oliva family are recorded as making Portolan charts between 1538 and 1673.

Centered on Sicily and the Mediterranean Sea, the chart stretches in the north from Ireland and extends southwards from the Canary Islands to the Red Sea. The tapering upper section contains a roundel of the Madonna and Child and above is an inset map of the Americas.

Despite its predominately practical purpose, the chart is elaborately embellished with compass roses, emblematic cities dotted along coastlines, flags, palm trees, a lion and a camel with rider. Also included is a 'Madonna of the Letter', the patron of Messina and held in particular veneration in Sicily. According to the tradition, in 42 AD St. Paul visited Messina to spread Christianity. Inspired by his impassioned words, the people of Messina sent their ambassadors to Jerusalem to pay their respects to the Virgin Mary. The Madonna gave them a letter addressed to the people of Messina, promising eternal protection to the city. Decorative details such as these, which often embellished Portolan charts proved valuable; they allowed viewers to identify the creator and its provenance.

Skilfully executed on vellum using ink, watercolour and gouache heightened in gold, the chart bears close comparison to others by Oliva or his workshop, including a signed one that is also centered on Sicily but far less extensive in nature. The choice of vellum was an obvious one; it has greater durability and resistance to moisture than paper. Occasionally produced in atlas form, others like this particularly extensive example would have been issued independently as scrolls, with insertion points for ties visible at the very tip of the chart.