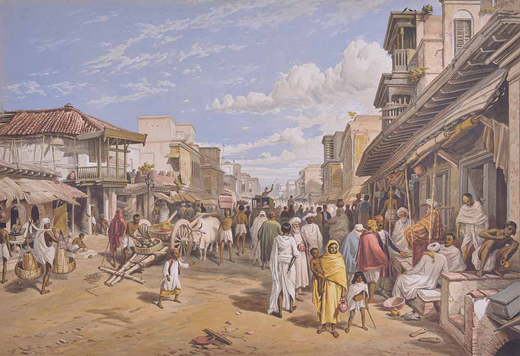 Leading the substantial Printed Books and Manuscripts section in our next Fine Sale at Chiswick Auctions is William Simpson’s exceptionally rare India Ancient and Modern published in 1867 with its 50 magnificent chromolithographed plates (one illustrated above). In addition to the depictions of the great historical monuments, natural beauties and ceremonials of the country which one would expect, Simpson’s work is perhaps more remarkable for the attention it gives to the frenetic street life and the more intimate domestic arrangements of the Indians themselves. As Martin Hardie comments in English Coloured Books, “the plates attain a remarkable degree of perfection, giving a wonderfully good idea of the landscape, costume, and native industries of our Indian empire.” Bound in contemporary half morocco, it is estimated at £10,000-15,000.

Another travel book comes in the form of Choiseul-Gouffier’s Voyage Pittoresque de la Grece published in 1782, with 126 fine engraved views of Greece and its islands and 2 large folding maps. Our copy is the first volume only: publication of the second was delayed by the small matter of the French Revolution, after which it appeared in livraisons between 1809 and 1825. According to Cohen-De Ricci, however, this second volume is “tres inferieur au premier.” The book, bound in contemporary calf, is estimated at £700-1,000. 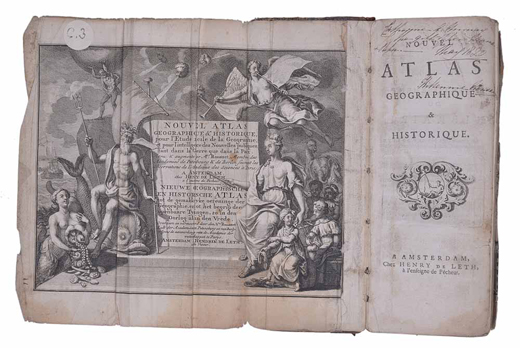 Hendrik de Leth’s Nouvel Atlas Geographique & Historique was published in 1742. Our copy is in a particularly unusual tall octavo format (198 x 76mm) and contains a superb folding allegorical frontispiece and 34 folding hand-coloured maps: the colouring is near contemporary. In untouched original condition and bound in contemporary calf-backed boards, this exceptionally rare and beautiful atlas is estimated at £700-1,000.

17th-century bibles are not rare, but our example, published by Robert Barker in 1613, is notable for two reasons. First, it contains, in addition to John Speed’s customary genealogies, a fine engraved double page map of Canaan, with an inset plan of Jerusalem; and secondly, it is in a hugely charismatic contemporary calf binding with brass fittings and clasps. The clasps are engraved with the initials “NM”. In original unrestored condition – except for a modern note inserted at the front detailing an unexpected Australian provenance – it is estimated at £400-600.

When Evelyn Waugh was a thirteen year old schoolboy at the Heath Mount School in Hampstead, he edited, and contributed to, a mimeographed publication with the title The Cynic. Cynical Without Being Cheaply So. Piquant in Moderation. Racy in Excess, a title which, assuming it is Waugh’s invention, is surely a foretaste of his later verbal felicity. The sale includes an example (Volume One, No. 2, dated February 8th, 1916) of this faintly scurrilous magazine which contains an editorial by Waugh and a short piece by him entitled “Diary of a Prize Medal”, surely amongst his earliest “published” works. Waugh would later remember the publication in his autobiography, amongst other fond recollections of his prep school days: “It was flippant rather than cynical; the few jokes that are intelligible seem very feeble.” Interestingly, Waugh’s co-editor was a fellow pupil called Hooper, a name that would be recalled, somewhat disparagingly, in the character of Lieutenant Hooper in Brideshead Revisited. Still in fine condition in its original wrappers, our copy of this rare survival is in fine condition and is estimated at £500-800.

The sale includes a number of other books by Evelyn Waugh from the same collection, notably a fine first edition of Black Mischief in dust-jacket (£300-500), a limited edition of The Loved One signed by the author and artist Stuart Boyle (£300-500), and one of just 50 copies of The Holy Places, signed by the author and artist Reynolds Stone, and finely bound in scarlet morocco (£500-800). Another highlight of the first editions in the sale is Tolkien’s The Hobbit, a good copy in original cloth but sadly lacking its dust-jacket. A pencil note on the half title, dated 1937, the year of the book’s publication, asks reasonably enough: “What is a Hobbit?” It is estimated at £700-1,000.

One of the most stylish books in the sale is William Aiken Starrett’s Empire State. A Pictorial Record of its Construction, published in New York in 1931. It is number 878 of an unstated limitation, and has a particularly striking coloured frontispiece of the Empire State building with beams of light radiating from its top, an image which could almost be an emblem for Art Deco. In superb condition, it is estimated at £400-600.

An astute vendor spotted a small and unremarkable looking album containing photographic negatives at a car boot sale and bought it on an impulse. On closer inspection, it turned out that four of the negatives were of the ship “Terra Nova” and its crew, including one Robert Falcon Scott, taken in 1910 when the ship was in Cardiff docks, just before setting off on its ill-fated voyage to the Antarctic, a voyage which would claim Scott’s and four of his crew members’ lives. These may be amongst the last pictures taken of the ship before she set sail and the album is estimated at £200-300.

Elsewhere, the sale is particularly rich in autograph material, with signed photographs of John Lennon, Frank Sinatra, Eleanor Roosevelt, Pablo Picasso and Lady Diana. There is a superbly varied and packed album including letters, signatures and signed photographs, inter alia, of Winston Churchill, Charlie Chaplin, Jack Butler Hobbs, and many others, and a small pen and ink self-portrait by William Orpen. This section also includes an archive of letters by William and Lady Walton, amongst others, many from the latter on the subject of William’s death and what would be a fitting memorial to him, and with a letter from Margot Fonteyn.

Finally, we have an intriguing association copy of a book printed in Washington in 1867 to record tributes from across the world following the assassination of Abraham Lincoln. Our copy, including a letter signed by Secretary of State William H. Seward, who was seated next to Lincoln when he was assassinated, and narrowly avoided death himself, was sent from the “Legation of the United States, London” to one Tom Taylor in recognition for the ode to Lincoln which he had written and had published Punch. The author would almost certainly have passed into obscurity were it not for the fact that he was the writer of “Our American Cousin”, the play being performed at Ford’s Theatre in Washington, and at which Lincoln was present when he was assassinated. This record of a defining event in American history is estimated at £1,500-2,000.