We are pleased to let you know that the Urban & Contemporary Art Sale is now on view at The Barley Mow Centre.

This is just a selection of some of the pieces we are excited about in the upcoming sale. The top picks include an early work by Alex Honda with his trademark immersive sculptural form taking the viewer on a journey through the piece, and a stunning and rare work by Xiao Bo in a figurative style, an uncommon piece to come by so something we are really excited about. 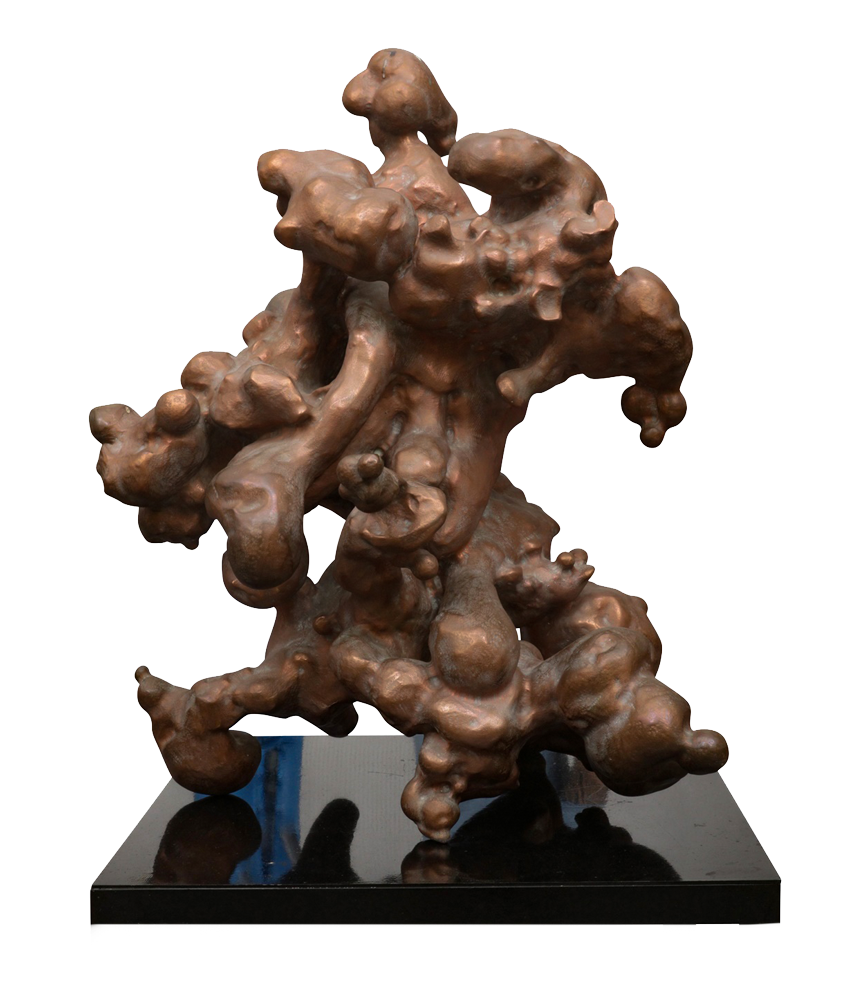 This piece is recognised as a prime example of Hoda’s early work which is characterized by masses of deformed figurative forms composed as a challenge to the viewers' subconscious. Hoda’s mixture of materials including bronze, zinc, steel, and copper fuse together creating a heavily textured evolving form. This piece entices the viewer to move around the sculpture and evokes an immersive viewing experience. Much of Hoda’s later work is dominated by subversive and fetishistic themes created from his signature materials of latex and rubber. Underneath Hoda’s veil of sexual implication lies his persistent mission to subvert the conventional notion of classical sculpture.   This particular style of work by the artist rarely arrives on the auction marketplace, making it an attractive piece for any collector of Hoda’s work. Alex Hoda was born in 1980 and was educated at the Wimbledon College of Art and Goldsmiths College. In 2008 Hoda graduated from the Royal Academy Schools in London where he currently lives and works. 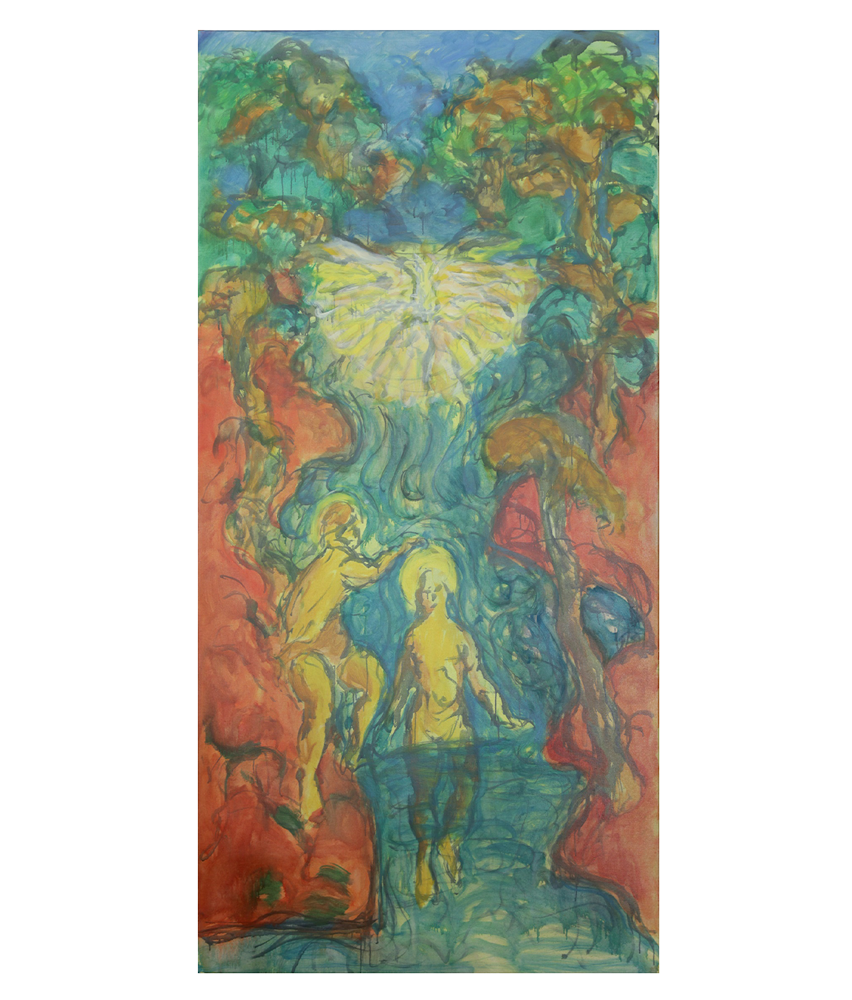 Hans Van Hoek is able to atmospherically bind his images together through the targeted use of light and darkness, form and colour. He takes inspiration from the works of Old Masters such as El Greco, Rubens and Michelangelo. He uses the principle of montage in his compositions to allow for multiple modes of perception. In this regard a very important role is played by the complicated wooden frames prepared by the artist himself that serve as an extension of the pictorial space.   "It is important to see the picture frames, painted or carved, as a space of experience and not as a border, line or barrier. ...a space encloses the core and is, on the other hand, surrounded by more and more space ... endlessly".   In creating the frames, choosing their ornamentation, the colour, the wood, the artist builds a direct relationship to the content of the picture and generates further optical and also graphic dimensions.

Please note that this work is located at our warehouse. If you would like to view this work, please book an appointment with the Head of the Department: Madeleine White

Provenance:  Purdy Hicks, London, where purchased by the present owner

Considered to be one of the leading painters of his generation, O’Donoghue drew inspiration from the lavish colours of Old Master painters such as Titian. His paintings frequently combine rich, expressionist colours and textures, verging on abstract, when addressing a particular event or history upon which he has chosen to meditate or elaborate.   His paintings explore themes of universal human experience, often on an epic scale, they meditate on ideas of truth and the relationship between memory and identity, drawing on history and personal records to create works that resonate with emotional intensity.   Marsyas alludes to the satyr in Greek mythology who is a central figure in two stories involving music. In one, he picked up the double oboe that had been abandoned by Athena and played it. In the other, he challenged Apollo to a musical contest and lost his hide and his life. The tales of free speech, hubris and loss are relatable in their themes reflecting human existence.   Charged with metaphorical, O’Donoghue’s works, though never fully formulated subject matters, invite the viewer to immerse themselves in the artist’s thought and working process, ultimately challenging them to confront their own relationship with identity. This reflects the artist’s deep-rooted interest in interrogating the way memory is forged through generations.   Hughie O’Donoghue was born in Manchester, England but much of his work is influenced by time spent in his mother’s place of origin, the remote Barony of Erris in Co Mayo, Ireland. The stark Irish scenery with its accompanying sense of tragedy, derived from the days of The Great Famine, found later expression in his art. O’Donoghue studied at Goldsmiths College and upon graduation he became artist-in-residence at London’s National Gallery. 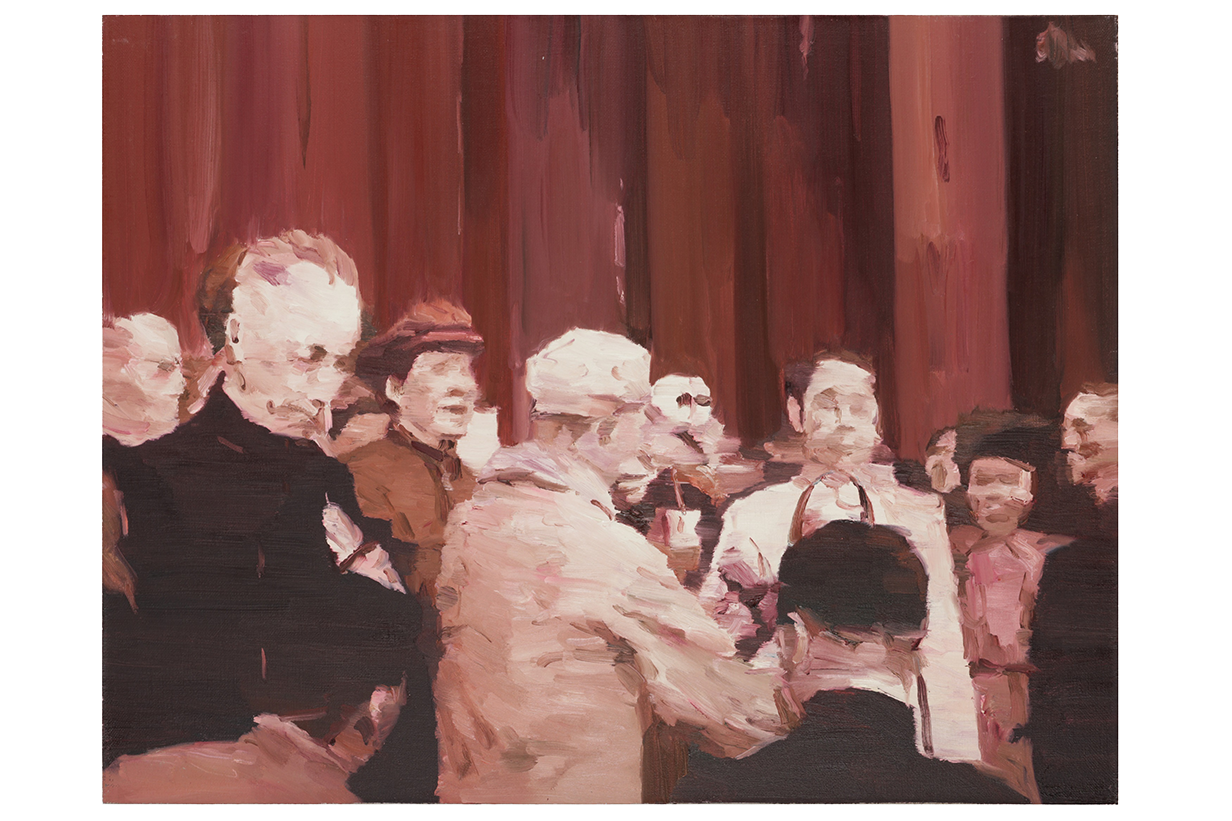 The two works by Xiao Bo in this auction are rare examples of Xiao Bo’s figurative works. Xiao Bo no longer paints in the figurative style, so these paintings from his early years are uncommon to come by. Only figurative works by Xiao Bo have a secondary market, so from a collector’s perspective, the two pieces we have in Urban & Contemporary Art June auction are extremely attractive.   There are always the intertwined relations between politics and pop art. Politics in art has developed in a notably different way in China. During the 1980s, after the Cultural Revolution ended, a new artistic generation embraced western Modern Art. This period of liberalism spurred a dramatic change in artistic styles. This time, the avant-garde movement emerged with a more radical tone of social and cultural criticism through creations via more traditional mediums such as oil and acrylic. Xiao Bo (Chinese b. 1977) was among the generation of young artists exposed to such an art movement. Xiao Bo graduated from the China Academy of Art in 1999, where he trained in traditional oil painting.   In the ‘90s, Chinese artists from the Cynical Realism movement in China begin to flourish on the global art scene. The cynical realism movement later branched into “Political Pop”, where artists such as Xiao Bo started to be recognised for their figurative paintings that navigate the cultural terrain of contemporary China and question notions of identity and the construction of memory.   From 2014 onward, Xiao Bo began to eliminate details and figurative techniques from his painting and used expressive brushstrokes to convey his ideas, focusing more on the creative process in his work rather than on the construction of various forms. 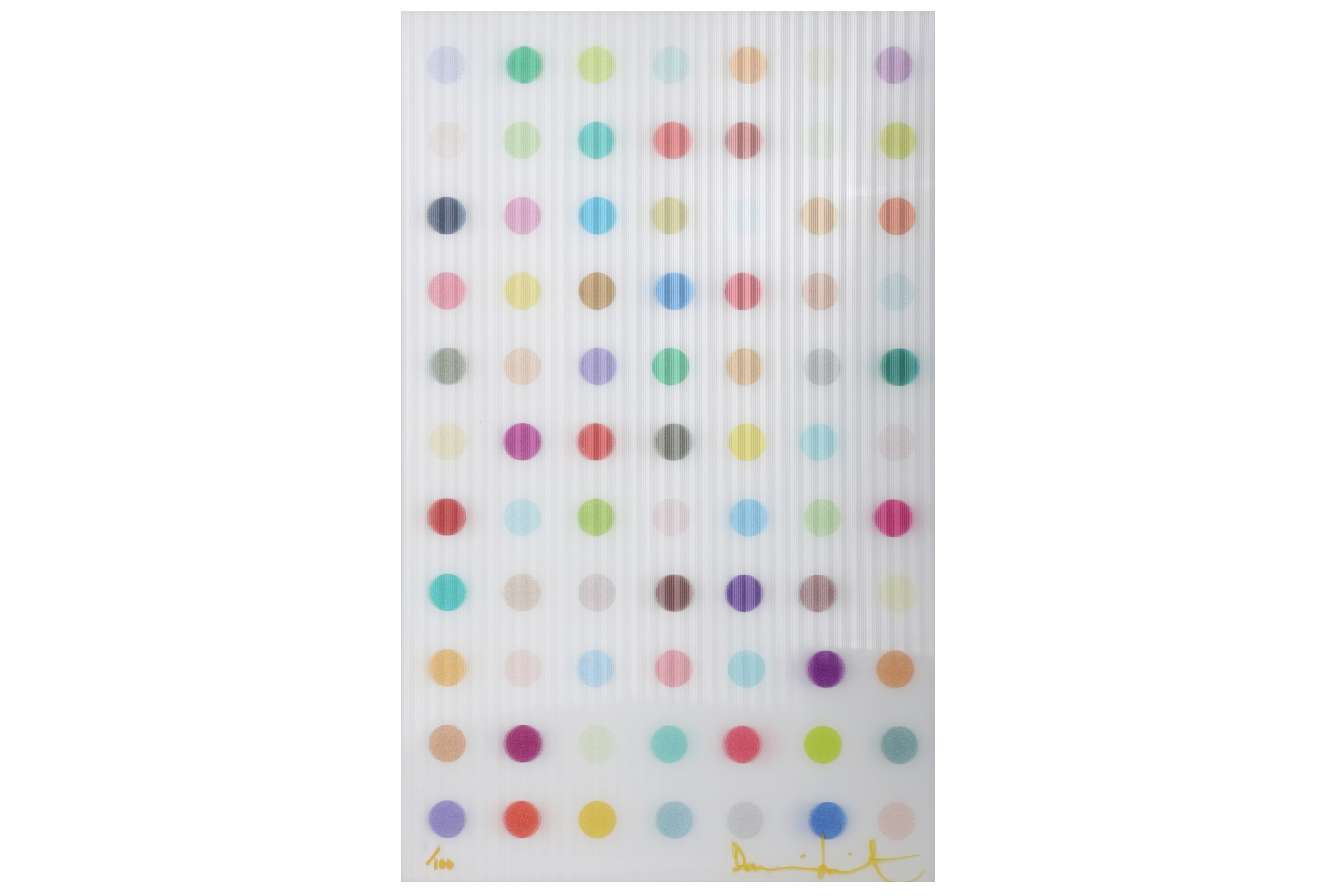 The mesmerizing artwork ‘Psilocybin’ is a digital lenticular print on PETG plastic. A playful take on Hirst’s iconic spots motif, the work shifts as the viewer moves, creating a visual effect of the spots moving from one side to the other that captivates the viewer. The brightly coloured spots are perhaps Hirst’s best-known motif as they aim to capture ‘the Joy of colour’ with never-repeating sequences of colour.   There are 5 main types of lenticular effect:

- Flip: which, as you walk past, or move the lenticular (hand-held) you will see a transition
from one picture to the other picture.
- Animation: a series of very similar frames all put together so as you walk past you see
a fluid movement (the type used in this work)
- Zoom: works on the same principle as animation except uses a series of similar frames
from small to large, so as you walk past the image it grows larger and larger
- Morph: takes 2 images just like a flip however a special piece of software integrates the two images using lots of
similar frames that changes each one gradually to the shape of the second image as you walk by
- 3D: you don’t need to walk past they are viewed head-on where you
will start to see depth in the poster.   Damien Hirst, born in 1965, is a British contemporary artist who rose to prominence in the late 1980s after curating a ground-breaking exhibition of work in collaboration with his peers from Goldsmiths College. Hirst’s legendary ‘Freeze’ was an overnight success and launched the group into a category all their own, known as YBA (Young British Artists). Hirst has since continued to push the limits of fine art and is notorious for creating installations, sculptures, drawings, and paintings that shake up the art world with incredible vigour. 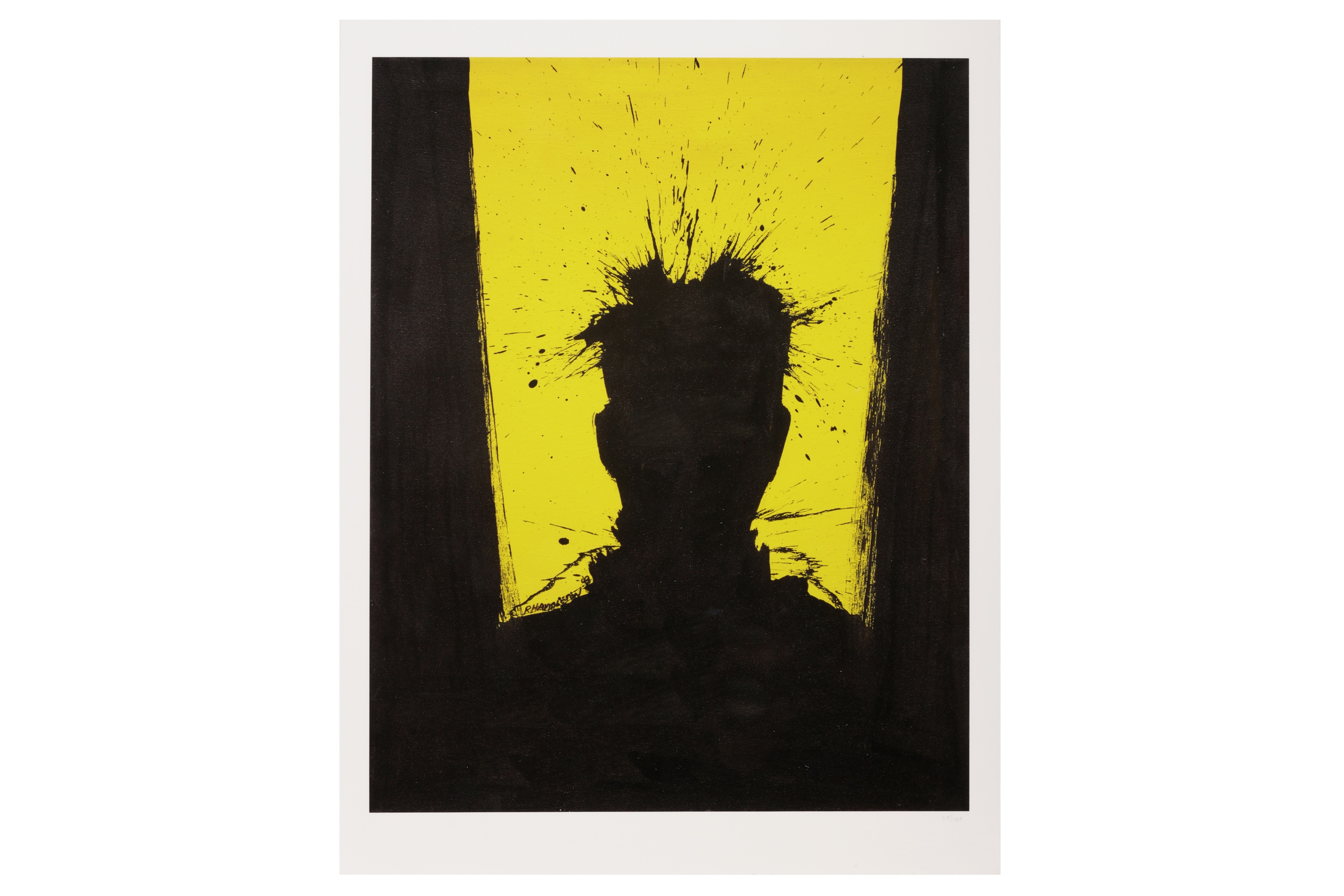 Richard Hambleton is often referred to as the ‘godfather of street art’. He pioneered New York’s downtown street art scene alongside Jean-Michel Basquiat and Keith Haring. He is best known for his menacing ‘Shadowmen’ and ‘Horse and Rider’ figures, both of which are represented in this auction.   Prior to his arrival in New York, he had already gained notoriety for his Image Mass Murder series, in which he painted ‘chalk’ outlines around the bodies of volunteer ‘homicide victims’ in public places. Finished with a splash of red paint, these works gave the viewer the impression of a crime scene.   He worked his way across the U.S. and Canada before settling in New York in 1979. During the 1980’s a series of Hambleton’s shadowmen emerged throughout downtown New York. His shadowmen were grisly black silhouetted figures that appear to have been painted mid-explosion. Each painting resembles a life-sized silhouetted image of some mysterious person.   “They could represent watchmen or danger or the shadows of a human body after a nuclear holocaust, or even my own shadow. But what makes them exciting is the power of the viewer's imagination.”   Lurking throughout the alleyways and subways of 1980s New York, the life-size, black-silhouetted figures of Hambleton’s shadowmen sparked fear and unease amongst the city's inhabitants, making him one of the most collectible artists of his time. Indeed, Hambleton’s success is seen in his invitation to exhibit at the Venice Biennale in the 1980s.   After his public art, Hambleton produced a variation of his ‘shadow’ work, showing his ‘Shadowman’ as a sort of ‘rodeo man’, or rugged ‘Marlboro Man’, often riding a bucking horse. This series was painted on canvas and other materials, where they could be displayed as works of art. Inspired by the Marlboro (cigarette) magazine advertisements, which in some ways exploited the image of a uniquely ‘American hero’ to sell its product, Hambleton appropriated and modified the image to create a new series of work.   In the early nineties, Hambleton began to withdraw from the art scene. Many of his friends and collaborators, including Jean-Michel Basquiat and Keith Haring, had died. In April 2017, a documentary following Hambleton’s rise to success and devotion to painting premiered at the Tribeca Film Festival. The artist died of cancer at age 65 just six months later. 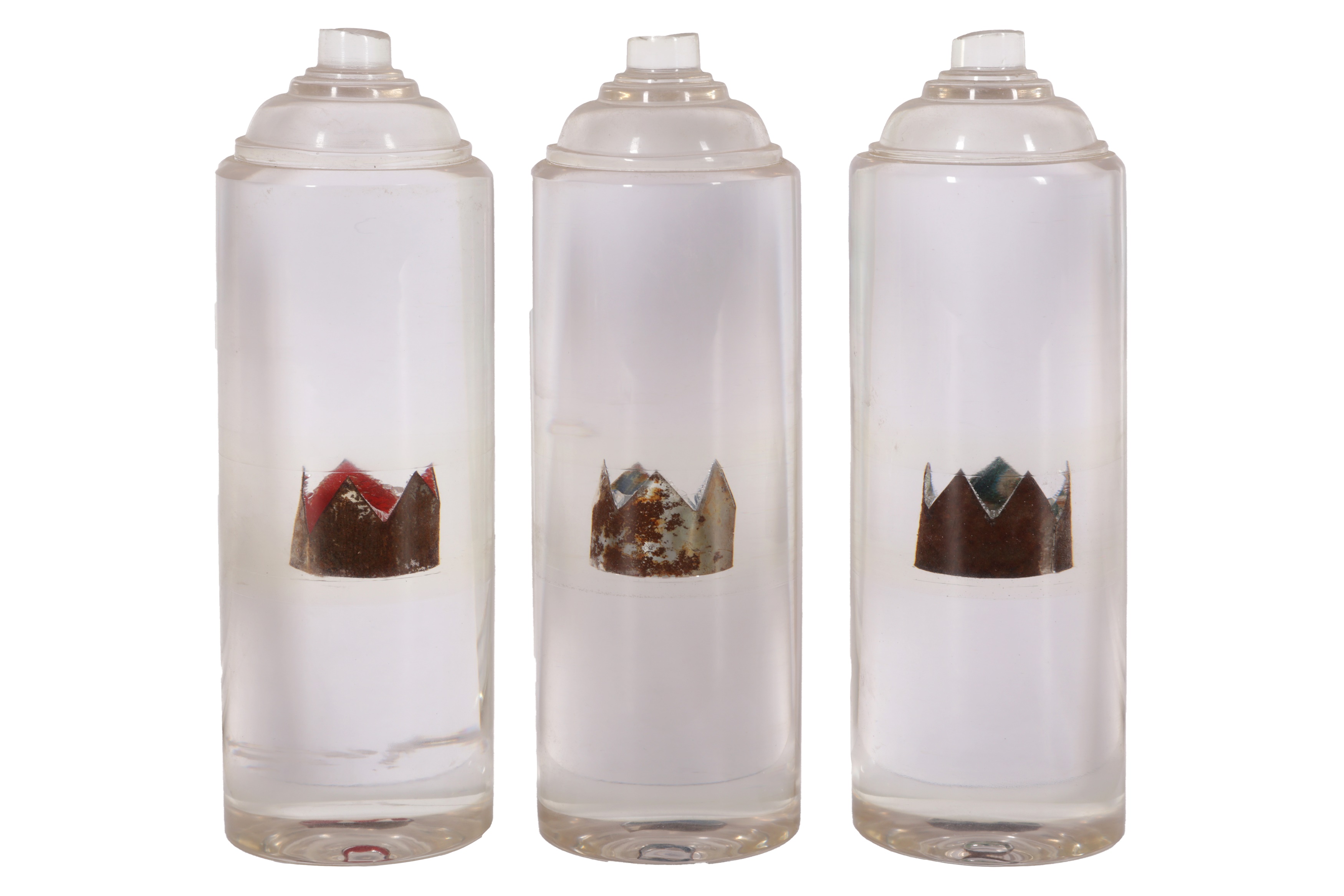 Pakpoom Silaphanʼs practice examines notions of globalisation, mass consumerism and the universal reach of cultural icons around the world. Inspired by the work of Andy Warhol and Salvador Dali, contemporary artist Silaphan fuses Western logos and cultural icons with themes from his rural Thai upbringing. As a child, he was exposed to the advertising of lucrative brands such as Pepsi and Coca-Cola and became fascinated by the universal language of signs and symbols. Silaphan bridges the gap between East and West, painting over crates and advertising signs, his mixed media collages examine globalisation and mass consumerism. Through this, he hopes to establish how every country is connected.   “The influence of living in a different culture inspires much of my work. I think multicultural societies are as complex as a loose jigsaw but offer many opportunities creatively.”   Silaphan’s art is a modern form of pop art. Firmly rooted in the love of graphic design, bold colour and brand that influenced Andy Warhol and Roy Lichtenstein, but with a quite literal undercurrent of the decay and distress that the failure of the Capitalist dream to grow and grow infinitely has wrought. Silaphan turns his materials into sculptural works of art – converting the original artist’s themselves into global brands. In this piece, he has taken Jean-Michel Basquiat's iconic crown motif and suspended one in each of the three paint cans, itself a symbol of the street art for which Basquiat is known for. Much of the materials Silaphan collects are from the many years he spent in Thailand and a key area of interest for him is the infiltration of Western imagery into Southeast Asia and the universality of some images and symbols, regardless of what they may be trying to sell.

Visit us any time between 11am and 4pm, including Saturday to discover this fantastic sale!

The preview will be on until Monday 13 June.