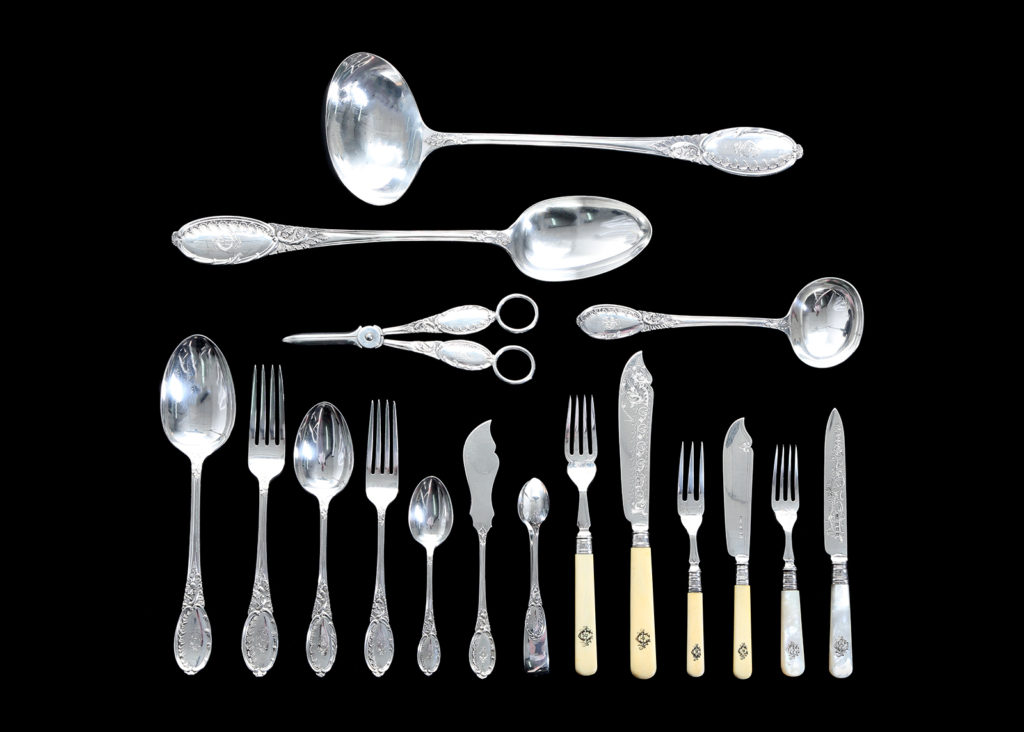 Ahead of the Silver & Objects of Vertu auction on 20th February, Head of Department John Rogers delves into the story behind an antique silver canteen belonging to the affluent Grumbar family, which only partially survives today. With access to original letters, menus and photographs, we are given a fascinating glimpse into the lives of its owners Edmond David Grumbar (born 1879 in Sarreguemines, Alsace, Germany) and his wife Jenabelle Grumbar, nee Shimberg (born 1886, Syracuse, New York), against the backdrop of the First and Second World Wars.

Hallmarked for Birmingham 1908 by T Wilkinson & Sons for the wedding of Edmond and Jenabelle Grumbar in that year, in its original form the canteen was a particularly extensive example housed in a finely made mahogany cabinet and crafted in a French Rocaille pattern. It would no doubt have been a significant and prized possession for the newlyweds. 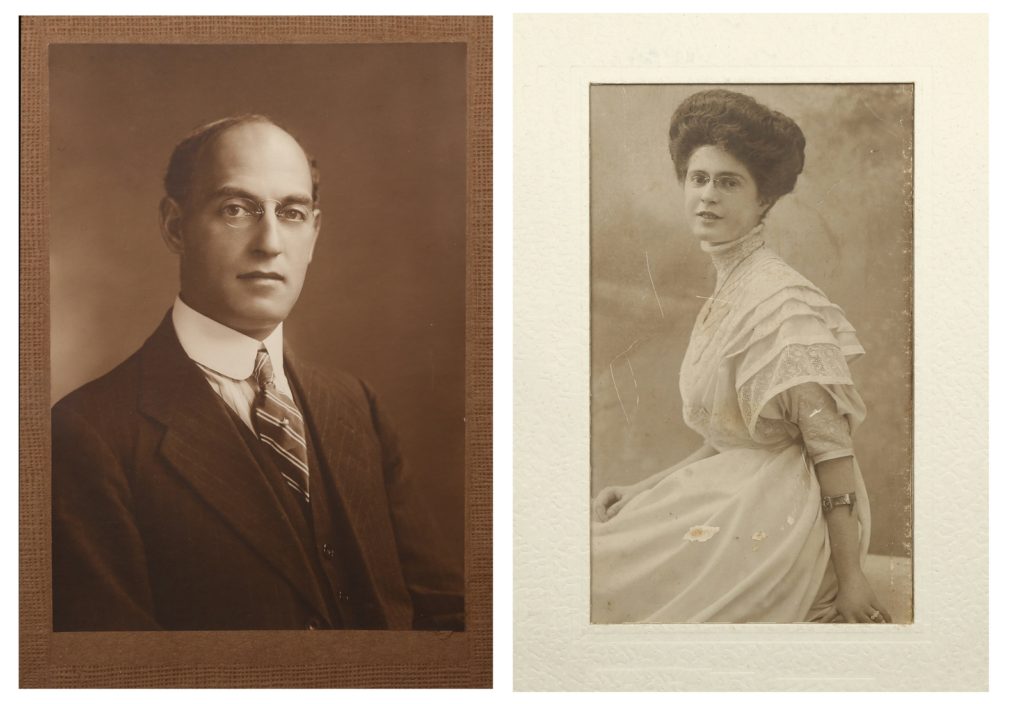 The canteen originally comprised of the below:

In addition to the main surviving portion of the canteen, now a place setting for eight with serving implements, five further lots that encompass the remaining surviving elements are offered in the sale. 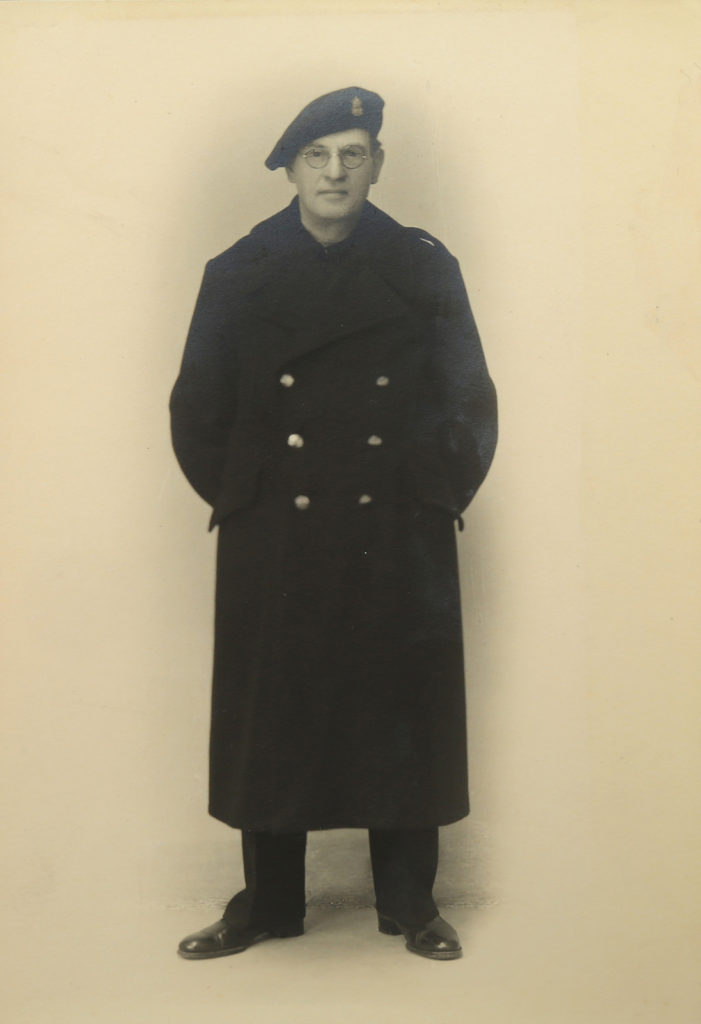 Edmond was born the son of Jewish parents, Alphonse and Lucile Grumbach, who moved to London in 1894 as Lucile did not want her sons to join the German army. The family did not identify as German and altered their name to Grumbar in the hope that this made them sound less so; in fact whilst both children were forced to speak German in school, their first language was French. It was not until 1919 that Alsace left German control.

Edmond and Jenabelle lived initially at 13 Crediton Road in West Hampstead, London. Grumbar was a silk merchant and the 1911 census indicated that the couple had a cook, housemaid and nanny in their home. During the First World War, Grumbar was in the volunteer force for 2nd (City of London) Bn, The London Regiment. In 1920, tragedy struck when Jenabelle died from complications caused by Spanish Flu. 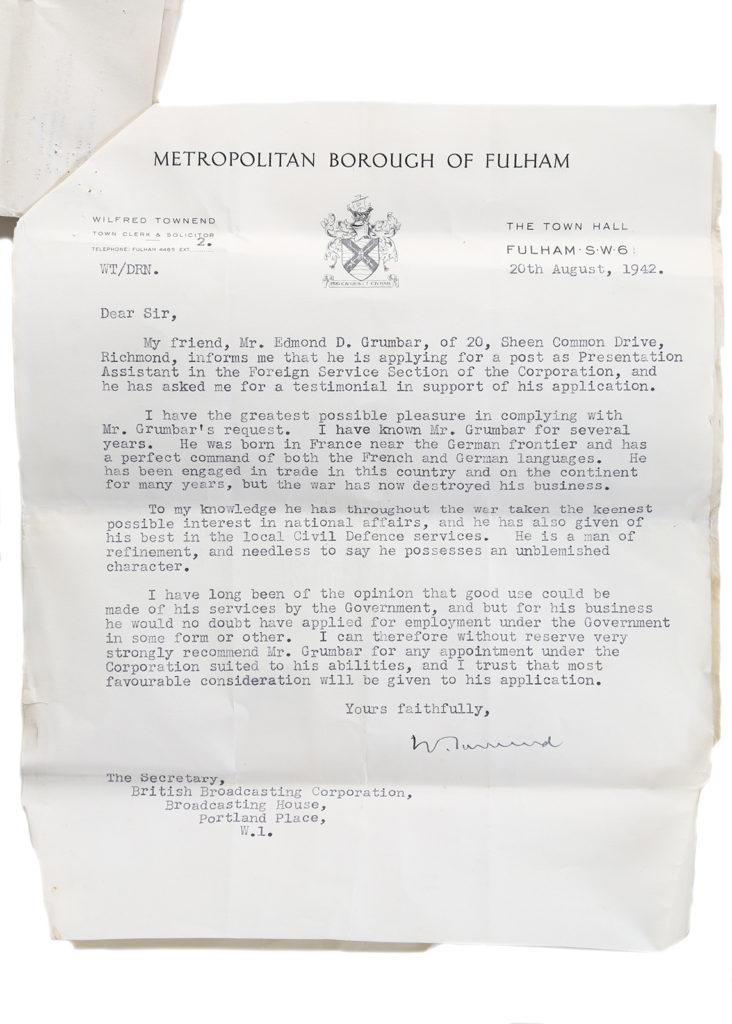 Discovered with the canteen was a letter of recommendation written in August 1942 (shown above) by friend of Grumbar and secretary for the British broadcasting corporation, Wilfred Townend. The letter pledges Grumbar’s suitability for the post of Presentation Assistant in the Foreign Service Section of the BBC and reads:

My friend, Mr Edmond D. Grumbar, of 20, Sheen Common Drive, Richmond, informs me that he is applying for a post as Presentation Assistant in the Foreign Service section of the Corporation, and he has asked me for a testimonial in support of his application… He was born in France near the German frontier and has a perfect command of both the French and German languages. He has been engaged in trade in this country and on the continent for many years, but the war has now destroyed his business.

To my knowledge he has throughout the war taken the keenest possible interest in national affairs, and he has also given of his best in the local Civil Defence services. He is a man of refinement, and needless to say he possesses an unblemished character.

In addition to this letter, menu cards also surfaced for the marriage of Grumbar’s son, Derek (b. 1913) to Marie Louise Grumbar. The wedding took place in Brussels on 1 August 1939, only one month before the outbreak of World War Two. The couple fled to London during the war and later emigrated to Florida. While this particular canteen was unlikely to have been used at this wedding, the menu (shown below) gives an indication of the type of food that would have been served during special occasions. 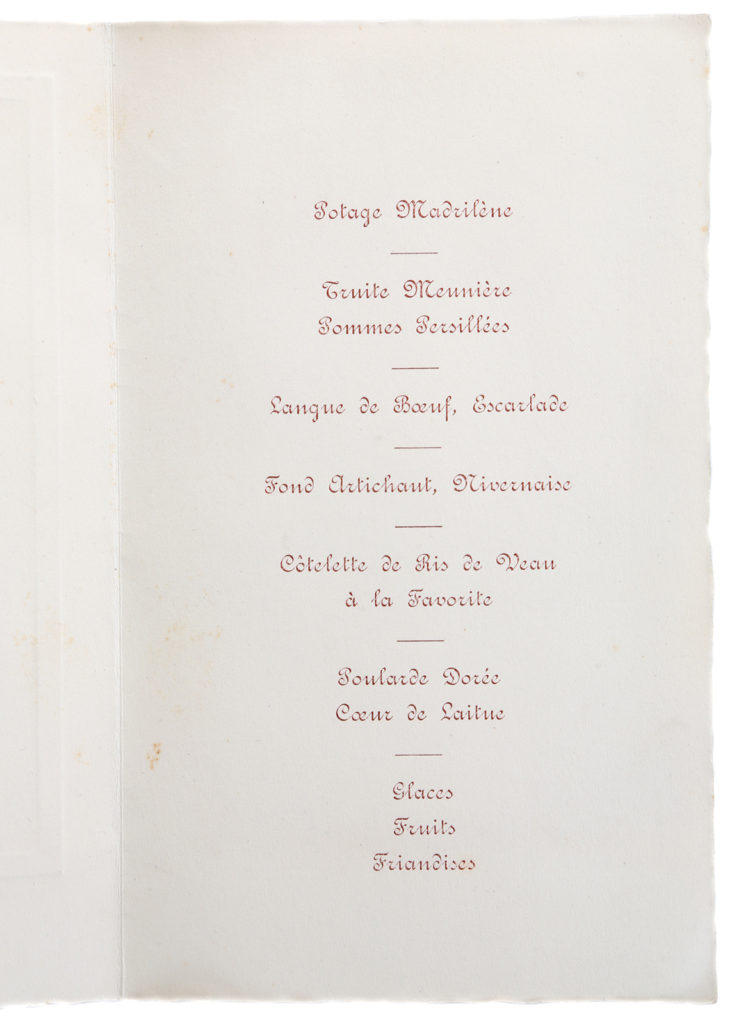 Chicken and cos lettuce