Ahead of the sale of Alan Thornhill's Studio, the artist's Putney studio will welcome visitors to view his works in situ on 26 & 27 June 2021.
The upcoming Open Studio event & auction will celebrate the depth and breadth of a sculptor who worked in Putney from 1960 until his death last year.

Visitors to the Open Studio will experience the original atmosphere, in which Thornhill's art was created. The weekend offers a rare opportunity for art lovers, collectors and curious minds to get a 'behind the scene' view of an artist studio, where accomplished large-scale works stand among small maquettes, drawings and sketches. The visit will provide a true insight into the artist's creative process.

There will be a selection of drawings and small sculptures available for purchase during the Open Studio.
We are excited to be part of the artist's story and to be offering the highlights of the contents of the studio at auction on Thursday, 8 July 2021 at 3pm.

Lot 201 Self-Portrait in the studio (detail)

The Studio Sale features forty-four lots, including thirty works in terracotta – the artist's favoured medium – three bronzes, nine paintings in oil and a charismatic self-portrait in charcoal. Thornhill's self-portrait showing the artist in the studio opens the sale. 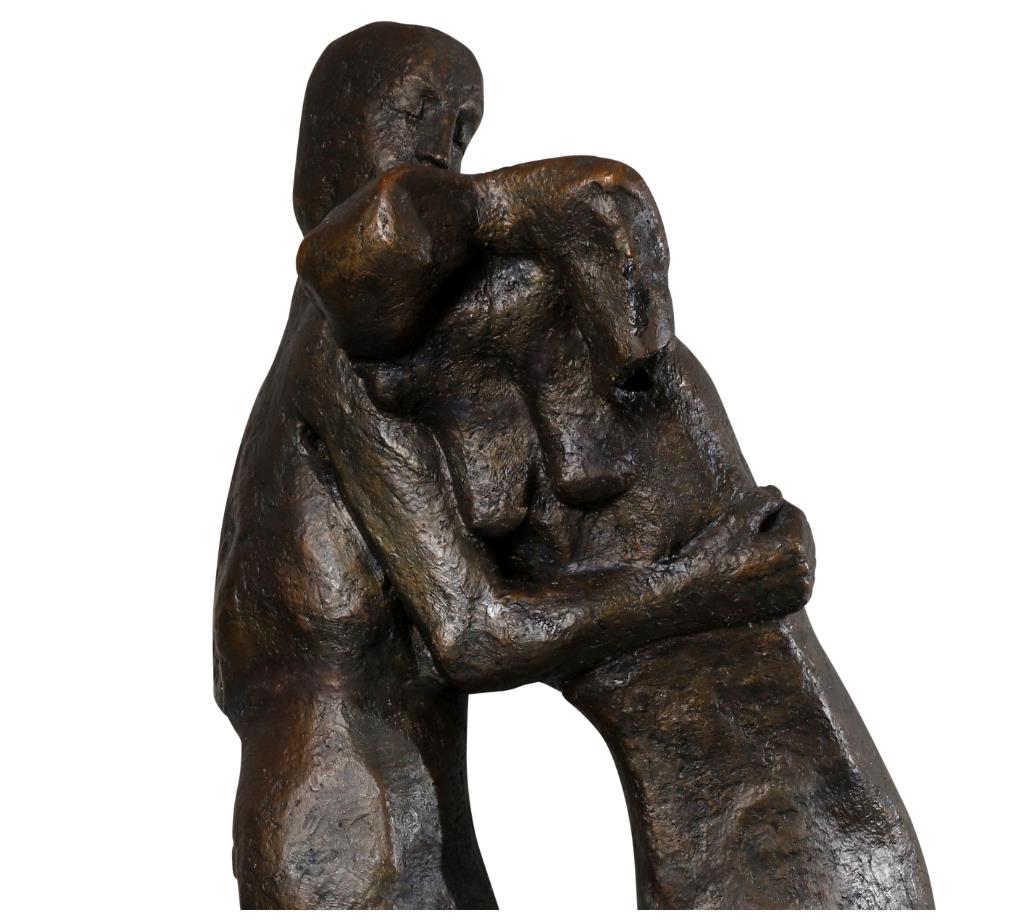 Among the highlights are six of his large scale works for the Putney Sculpture Trail, and eleven of his signature portrait heads. The idea for the Sculpture Trail developed from the series of monumental life-sized figurative compositions that evolved from his imagination during the 1970s and 1980s. It features nine monumental bronzes by Alan Thornhill and was opened in 2008. Set by the Thames, the route runs for one and a half miles, from Leaders Gardens to the west of Putney Bridge to Point Pleasant to its east. Six of the original patinated terracottas from which the bronzes were cast are included in the auction; from west to east along the trail these are Load (lot 218, bronze near Thai Square); The Turning Point (lot 217, bronze on the corner of Putney High Street and Putney Bridge Road); Motherfigure (lot 217 bronze at Putney Wharf East; Nexus (lot 209, bronze on the south side of Wandsworth Park); Pygmalion (lot 208, bronze at the East Gate of Wandsworth Park) and Fall (lot 207, bronze at Prospect Quay, Riverside Quarter, Point Pleasant)

The idea of the trail began with the donation of Load to Wandsworth Council in the late 1980s, which was installed close to Putney Bridge. In 2005, Thornhill offered further sculptures and the idea of a sculpture trail along the banks of the Thames was devised, with primary sponsorship for the project from Western Riverside Environmental Fund and Wandsworth Council. It is now the largest permanent outdoor sculpture collection by one artist in London.

Thornhill always wanted his work to be viewed with an open and enquiring mind, without preconceptions of either form or meaning. He wrote:

My aspiration has been to achieve in the round objects inviting scrutiny from many angles and removes, challenging and hopefully affecting the viewer. With practice over time the displacement of attention away from the subject adds the complexities sensed as ‘content’ to creep or flow into the work from which the viewer, including the sculptor himself, can obtain an unfathomable degree of mystified satisfaction.
Lot 237 Bond (detail)

Thornhill's choice of sitter for his portrait heads was determined by his wide-ranging interests in politics and the arts. Heads of some of the leading and most outspoken figures of the time to be offered in the sale include politician Enoch Powell, poets Hugh MacDiarmid and Basil Bunting, educationalist A.S. Neill, designer Gordon Russell, and trade unionist Frank Cousins

Explaining his methodology he wrote:

‘Deliberately devoid of "initial idea" my work is propelled by the process of improvisation. It evolves as an act of faith from an abstract into a figurative or at least an organic statement in accord with my general aspiration: to arrive by an uncharted route at images which strike home.’[he] ‘pioneered a radical and improvisatory approach to clay work that involved dispensing with an internal armature and allowing content to emerge from his unconscious. Abstract pieces of the 1960s developed into large groups of figures. Pacifism, Jungian psychology and world conflicts were themes that emerged organically in his work.'
(The Guardian, 1 May 2020) comments his daughter Anna Thornhill.

Alan at his studio.

You are welcome to watch Anna Thornhill's interview on her father's work: