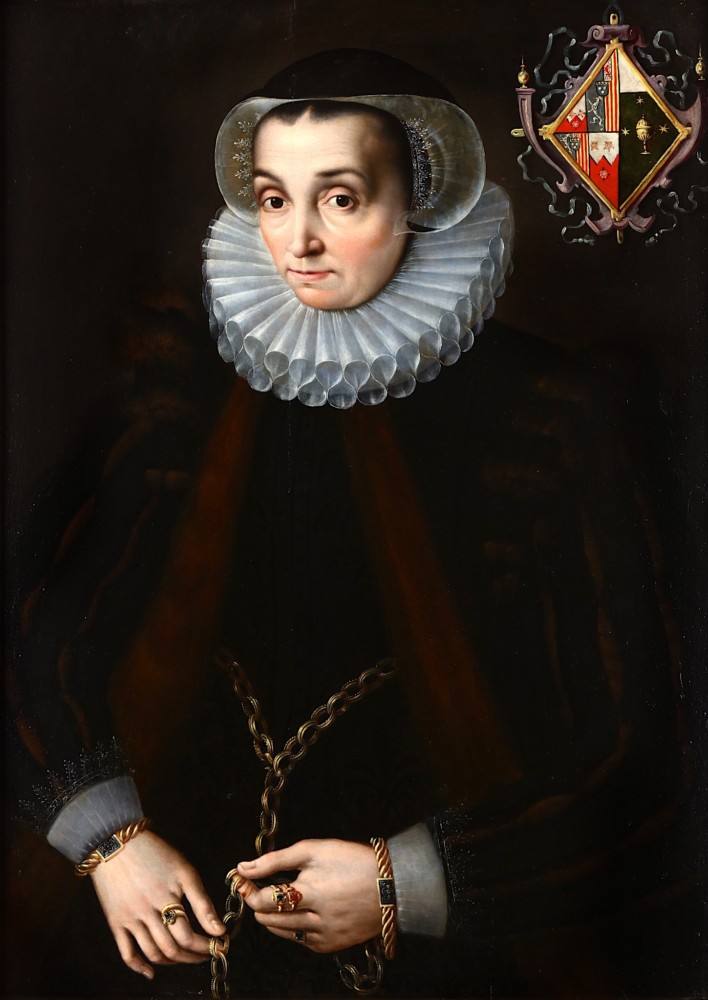 This three-quarter-length portrait of a lady wearing a black dress and fur-lined coat, lace ruff and cap is set to go under the hammer in the auction of Old Masters on 31st January. The painting was executed by an artist in the circle of Gortzius Geldorp (1553 – 1616), a Flemish artist active mainly in Antwerp and Cologne who became a successful portrait painter working for the aristocracy and other prominent patrons.

Following in-depth research, heraldic expert and author Jan van Helmont has identified the previously unknown sitter as Maria le Mesureur, née Godijn (d.1626). Van Helmont describes heraldry as his calling and compares the long journey towards identification as similar to travelling in a time machine. His highly skilful detective work into the identity of the sitter began by consulting an authoritative text on heraldry by Count Theodore de Renesse. Renesse’s 7-volume book consists of approximately 100,000 coat-of-arms, which van Helmont edited and re-published in 1 volume. 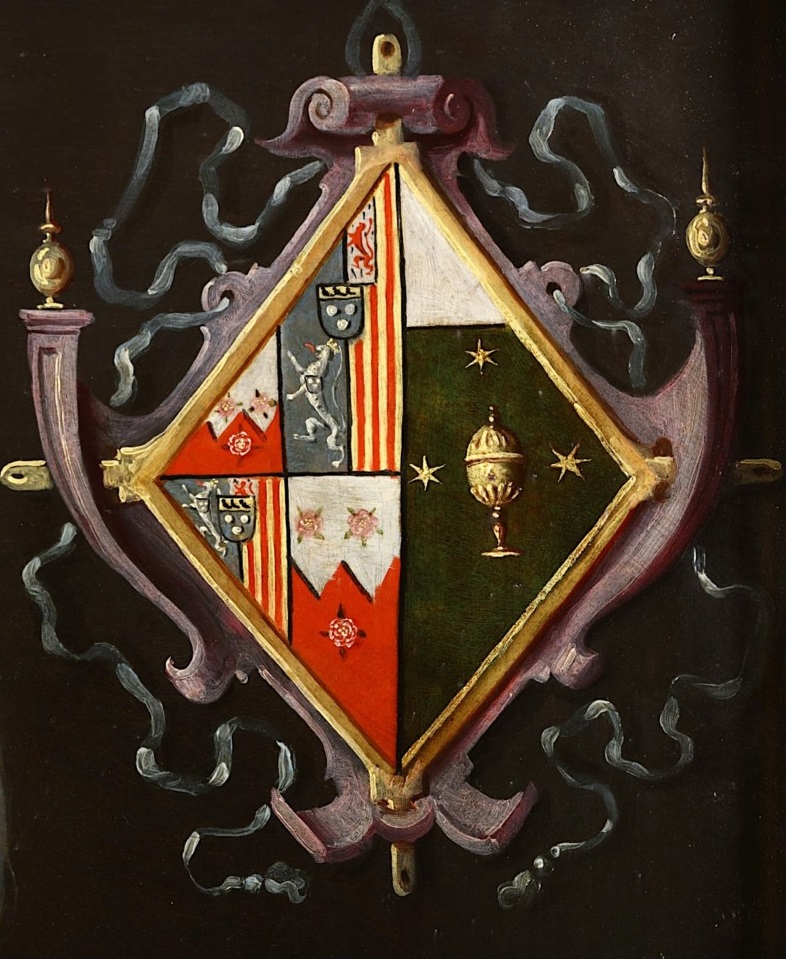 The coat-of-arms depicted in the portrait (shown above) shows a golden beaker on the viewer’s right hand side and three roses on the left. Van Helmont identified all the families referenced in Renesse’s text whose coat-of-arms included a golden beaker and did the same for the roses. This resulted in long lists, including French, German, Italian, Spanish and Portuguese families. Subsequently, Van Helmont cross referenced these two lists and through process of elimination unearthed which lady with a golden beaker in her coat-of-arms married which gentleman with three roses in his coat-of-arms. This is the moment where the names Maria Godijn and Pierre Le Mesureur surfaced.

The diamond shaped coat-of-arms portrayed in the portrait is known as a lozenge; the mark of a single woman, either as a spinster or as a widow. In this case we are looking at a widow’s lozenge; it depicts the sitter’s husband’s and family’s arms partied per pale her father’s as did the shield she used while married. The golden beaker represents the sitter Maria Godijn alone and the left-hand side shows her late husband Le Mesureur’s roses, with quarters that represent his ancestors.

Pierre le Mesureur was from a prominent family who lived in Cambrai and Valenciennes, which are now in modern day French Flanders. He was a merchant and became almoner of Antwerp. Le Mesureur and his wife Maria were an influential couple who did business with the famous Antwerp publisher and intellectual Christophe Plantijn (c.1520-1589). Le Mesureur provided Plantijn with the map of Cambrai for the famous reference work ‘Description de touts les Pays-Bas’ by Lodovico Guicciardini.

It is possible that this portrait of Maria Godijn was the one listed in an inventory drawn up upon her death, published in Erik Duverger's Antwerpse kunstinventarissen uit de zeventiende eeuw, (vol. 2, 1985, p.487). The entry reads 'De twee Contrefeytsels van der Afflivige ende wylen Sieur Peter le Mesureur heuren manne saliger in gestoffeerde listen', meaning 'Two portraits, one of the deceased and the other of Sir Peter Le Mesureur her late husband in frames.'

We are most grateful to Jan van Helmont and would like to thank him for identifying the coat-of-arms and the sitter.