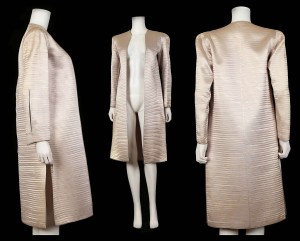 True couture pieces, such as this Jeanne Lanvin coat, always excite me when they come up for sale. This piece is at once fun and elegant, a simple shape offset with beautiful details that Lanvin is famed for. The silver kid-leather trim and the futuristic slashes at the sleeves remind me of 1960s Courreges designs but in fact, as the hand-printed fabric label states, this piece was created in 1943 - a particularly interesting period of the Lanvin fashion house.

Jeanne Lanvin opened her fashion house in 1889 and quickly established herself as the 'Grand Dame' of the Parisian fashion scene. Modern Haute Couture originated in the French capital  in the 1860s,  and the world continue looking to Paris for the following decades for style leads.

Paris's position as fashion world leader was shaken, however, in 1940, when the German tanks rolled in and the Nazi occupation begun. Whilst a number of fashion designers relocated (including Elsa Schiaparelli, who moved to the US) , a large amount stayed defiantly on. It speaks volumes of the importance the French put on style that instead of moving away, many designers decided to stay and continue creating the French ideals of beauty and form.

Jeanne Lanvin was one of those who decided to stay put, albeit in reduced circumstances. This coat was made during the occupation and still displays the skilful tailoring Lanvin is famed for, but with less of the opulence of earlier pieces. Who this coat was designed for it is impossible to say, certainly the native wealthy elite of the city were still proudly buying expensive fashion, but it is possible that it was made for the wife or family of a German officer. Production was limited during the occupation and so pieces from this period, such as this jacket are rare and important. Lanvin saw out the occupation, which finished in 1944, but died two years later, aged 79. 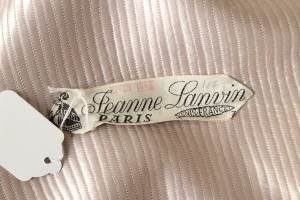