One of the highlights of the upcoming Antiquities and Tribal art sale – and one of the most interesting items I have ever had the pleasure to handle and catalogue – is lot 108, a Moche stirrup vessel in the shape of a frog, Peru, dated circa 5th-7th Century A.D.

It was purchased from Howard Nowes Ancient Art, NY, in 2004 and was previously in the Hans Monheim Collection, Germany, acquired in the 1950s.

The Moche people of the North coast of Peru produced a large quantity of this type of stirrup vessels with typical bridged spout, finely mould in the shape of naturalistic animals and humans and also mythical beings.

Amongst the wide range of naturalistic representations of animals, frogs are a recurrent subject as they were associated with rain, water and fertility, due to the myriad of eggs they spawn.

However, some frogs are more special than others and this is certainly the case with ours.

Experts have identified a particular kind of mythical composite creature that is a hybrid between a frog and a feline and they have called it the ‘Botanical Frog’. Its characteristics can vary greatly, including stripes, feline claws, fangs, ears and often – like in this case – feline nose.

In modelled and painted depictions the Botanical frog is often represented in association with Moche agricultural produce like manioc, pointing to a harvest deity.

For an in-depth analysis of the Botanical frog and its symbolism, cf. D. McClelland, The Moche Botanical Frog, ARQUEOLOGÍA IBEROAMERICANA 10, 2011, pp. 30–42.

This vessel will be auctioned on the 29th September and is estimated to sell between £600-800. 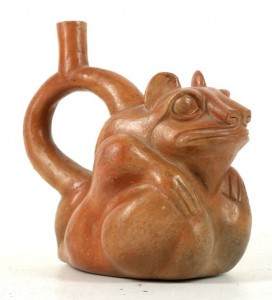 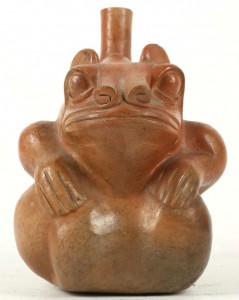 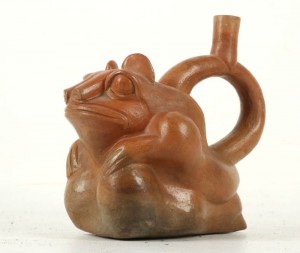 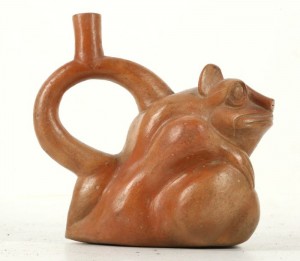