Over the next few days I'll be blogging about some of the bags that I am forever being asked about - those at the top of women's Most Wanted (and hopefully Christmas) list. 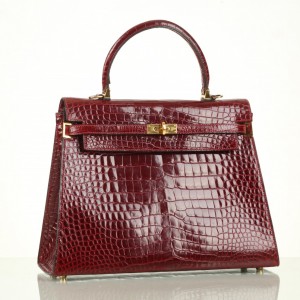 Well bag-lovers, you’re in luck! Sadly no Birkins have arrived on my desk, but last week a beautiful Hermès Kelly walked into my life and became lot 345 in the sale on 24th November. Dating from 1990, this bag in black box leather is the all coveted large size of 30cm wide. Whilst Kelly bags retail upwards from £7,000, the starting price for lot 345 is the far-less eye-watering price of £1,000. Also on offer and from the same vendor is lot 346 a Kelly style bag in stunning rouge crocodile leather. Although the bag is unsigned the quality is sensational and the estimate is a very reasonable £500-800. Had the bag been an Hermès I would not have hesitated at adding another zero to the estimate! Shows what a difference a name makes.

Hermès began life in the 19th century making high-end saddles and the first version of the Kelly was designed as a leather bag for carrying lady riders’ saddles. The design was refined through the first decades of the 20th century to the structured, top-handle bag we have today. The Kelly had its defining moment in 1956 when Princess Grace Kelly of Monaco used her beloved bag to hide her pregnancy bump from the paparazzi. Hermès officially renamed the bag the Kelly in 1977 in honour of their royal patron. 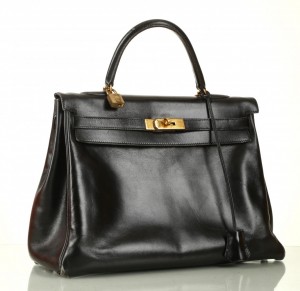 If you have an Hermes bag that you are thinking of selling, please do get in touch and email pictures to meg@chiswickauctions.co.uk