More than just a silver lining

The extraordinary work of Oomersi Mawji

Chiswick Auctions’ Silver and Objects of Vertu sales have grown both in size and geographical range to showcase high-quality silversmithing from all round the world.  In our recent sales we have featured works in silver from Iraq, Persia, Burma, China, India, Europe and Colonial America.  In our major forthcoming two-day sale on the 22nd and 23rd June we are delighted to be able to offer, among many other items, five separate lots of work by Oomersi Mawji, the most celebrated of all Indian silversmiths.

Born in Gujarat before 1850, Oomersi Mawji came from a family of cobblers and reportedly started his career specialising in leather engravings. However, he moved careers rapidly, and by the late 1860s he was already a court silversmith to the Maharaos of Cutch and the Maharajas of Baroda, two of the most important of the Indian princely courts.

Oomersi Mawji established his workshop in Cutch, and as he developed his business, he brought his sons to work with him as silversmiths. Sponsored by his princely patrons, Oomersi Mawji participated in the 1878 Exposition Universelle in Paris, after this his fame spread beyond India. Demand for (and prices of) Mawji works grew, with items now offered for sale in London with Liberty & Co. and Proctor & Co. becoming retailers of his work.  Mawji himself died in c.1890, his sons carried on the business until they finally closed the business in c.1930.

Mawji’s creativity, skill, and workmanship are rightly celebrated. The laborious process of chasing the silver from the outside while the interior is filled with mixture of resin and wax called kil, it involves heating the metal and cooling it rapidly to soften it then repeating the chasing with kil once or twice again. This process has often wrongly been referred to as repoussé. "Working the silver with ingenious skill and patience, Oomersi Mawji and his sons raised the quality of decoration on Cutch silver to an art form" notes Wynyard Wilkinson in his seminal Indian Silver 1858 - 1947: Silver from the Indian Sub-continent and Burma Made by Local Craftsmen in Western Forms [London, 1999].  Indeed, silverware manufactured by Mawji and his workshop are now in the collections of many international museums such as the Victoria & Albert Museum in London.  His work has been described as “sublime - and the equal of the best silversmiths of Europe”

Items of utility as works of art

Chiswick auctions has sold a number of items by Oomersi Mawji and his workshop in the past, such as a large tray embossed with the crest of Lieutenant Colonel John Tobin Ready (1837-1908) who was in the 66th Regiment, Commander 2nd Battalion, the Royal Berkshire Regiment, deployed to India between 1857-1865 and 1870-1880. 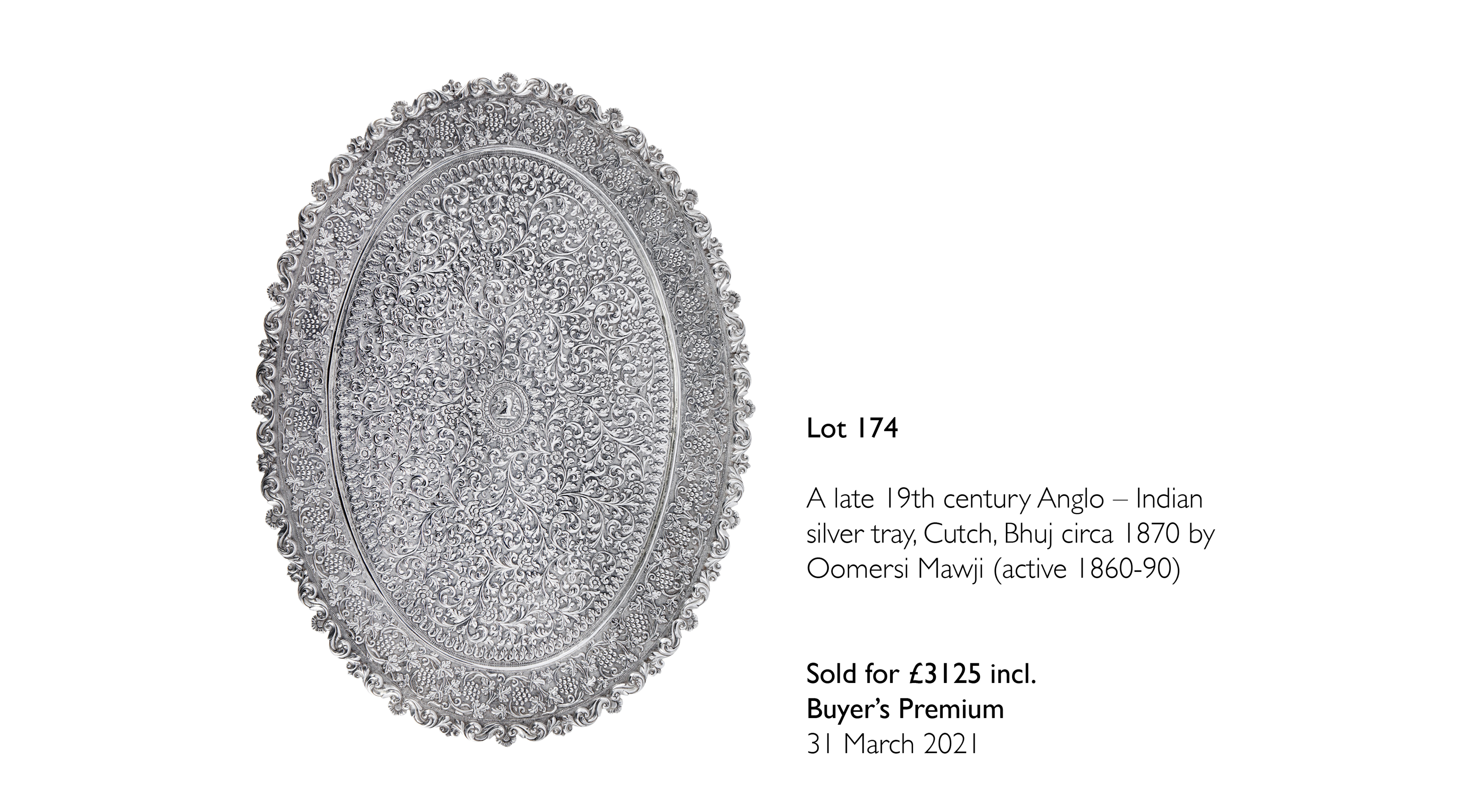 Head of the Silver & Objects of Vertu, John Rogers, commented: “The five lots we are offering in our forthcoming sale show the intricacy and imagination that Oomersi Mawji and his workshop employed in the creation of superb silverware. It is a joy to be able to bring more of these beautiful works before the public so that established collectors as well as new eyes may witness the joy that is Indian silversmithing.” 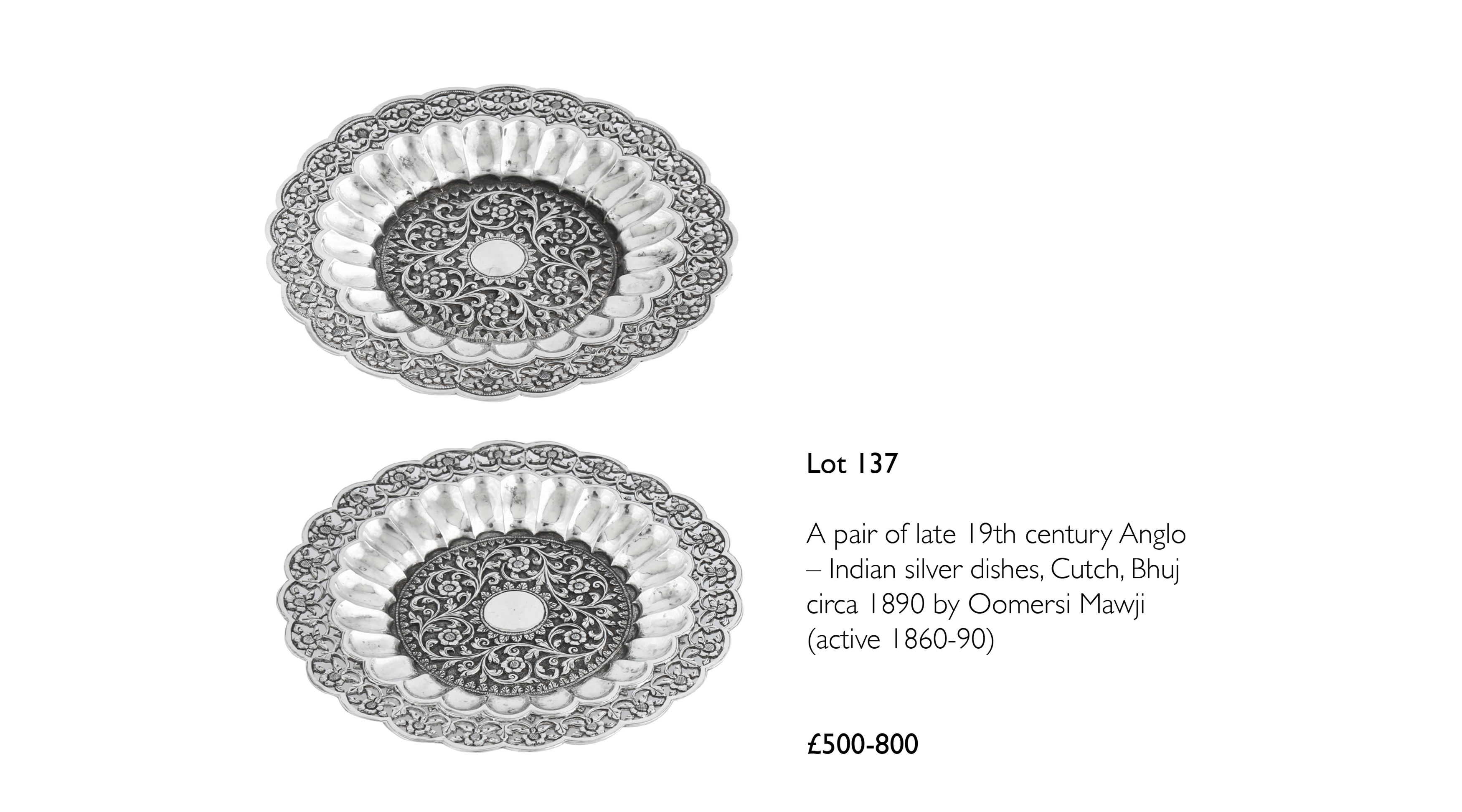 In June’s sale, the first of our lots by Mawji and his workshop are this pair of silver dishes, circa 1890 lot 137. Each of scalloped circular form with a pierced edge and fluted section, both raised on ball feet; the decoration includes delicately chased foliate scrolls and rosettes edged with acanthus leaves. 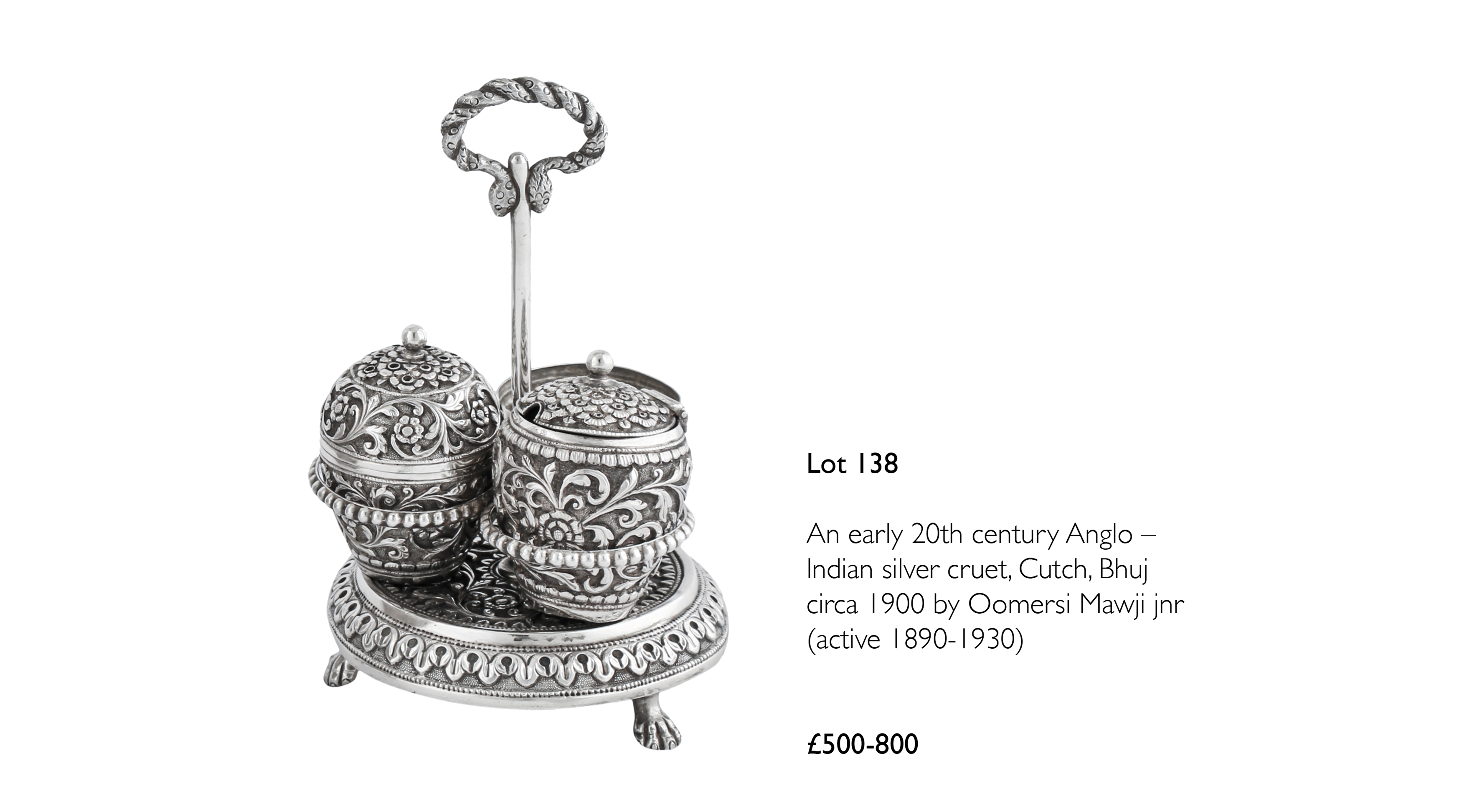 This is followed by Lot 138. An early 20th century silver cruet, circa 1900 by Oomersi Mawji jnr – one of the sons of the master himself.  Cruets were a familiar feature of Victorian and early twentieth century dining tables, and this particular cruet is set apart from the majority of its type by the quality of its decoration and the skill employed in its realisation.  It features a central carrying loop handle formed of two entwined serpents, with the cruet pots of rounded ovoid form, intricately decorated and, along with the base, chased with foliate scrolls and rosettes, the stand having an edge of acanthus leaves, the lids with chased stylised flower heads. 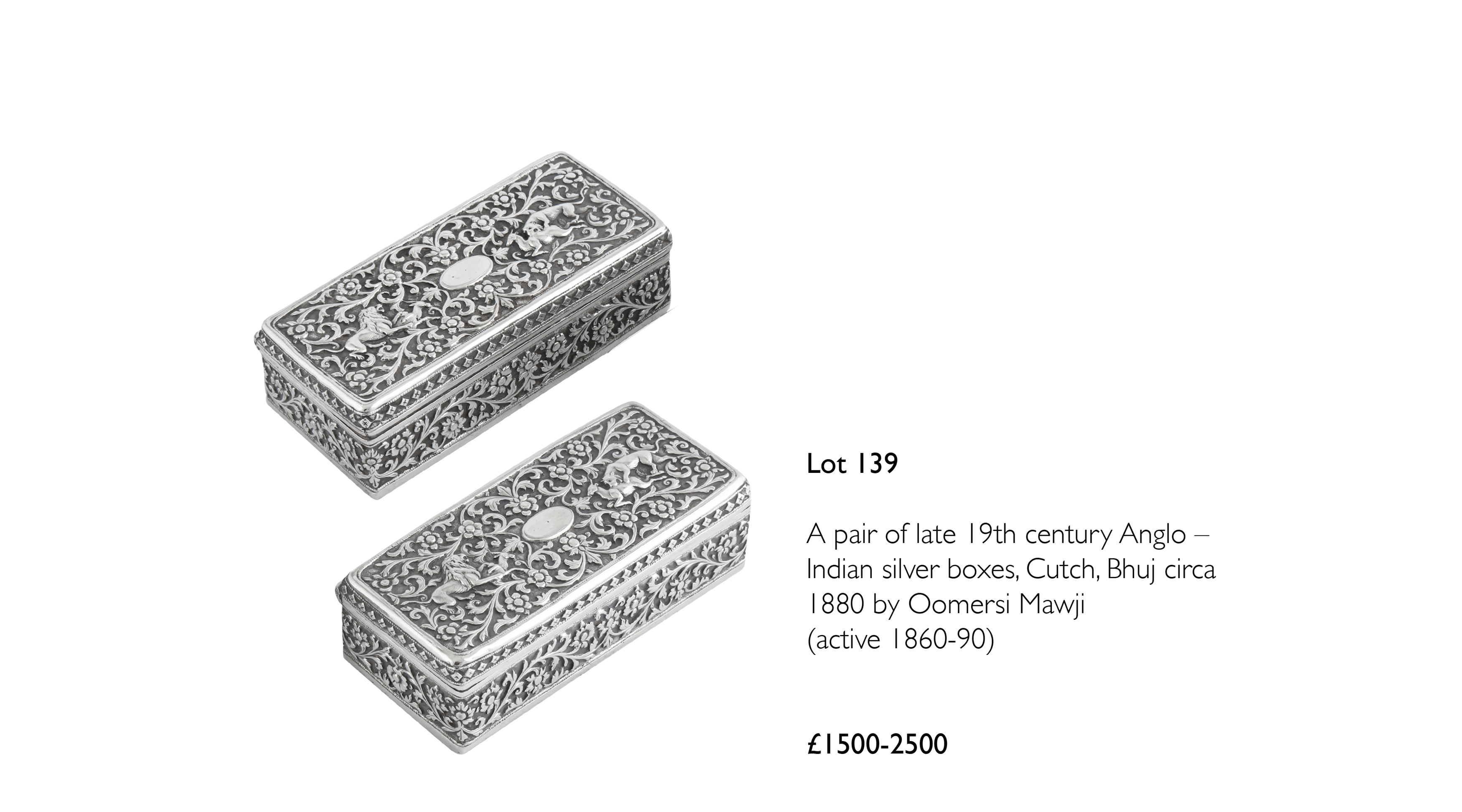 Next we have lot 139, A pair of late 19th century silver boxes produced under Oomersi Mawji himself.  These intimate items again show the intricacy and detail of workmanship that Mawji and his workshop would produce on even the most compact items: the sides have deep chased decoration of foliate scrolls, the lids have a border of lozenges, chased with the same motif, the lids being centred with oval cartouches flanked by a lion attacking a gazelle, and a tiger attacking a gazelle. 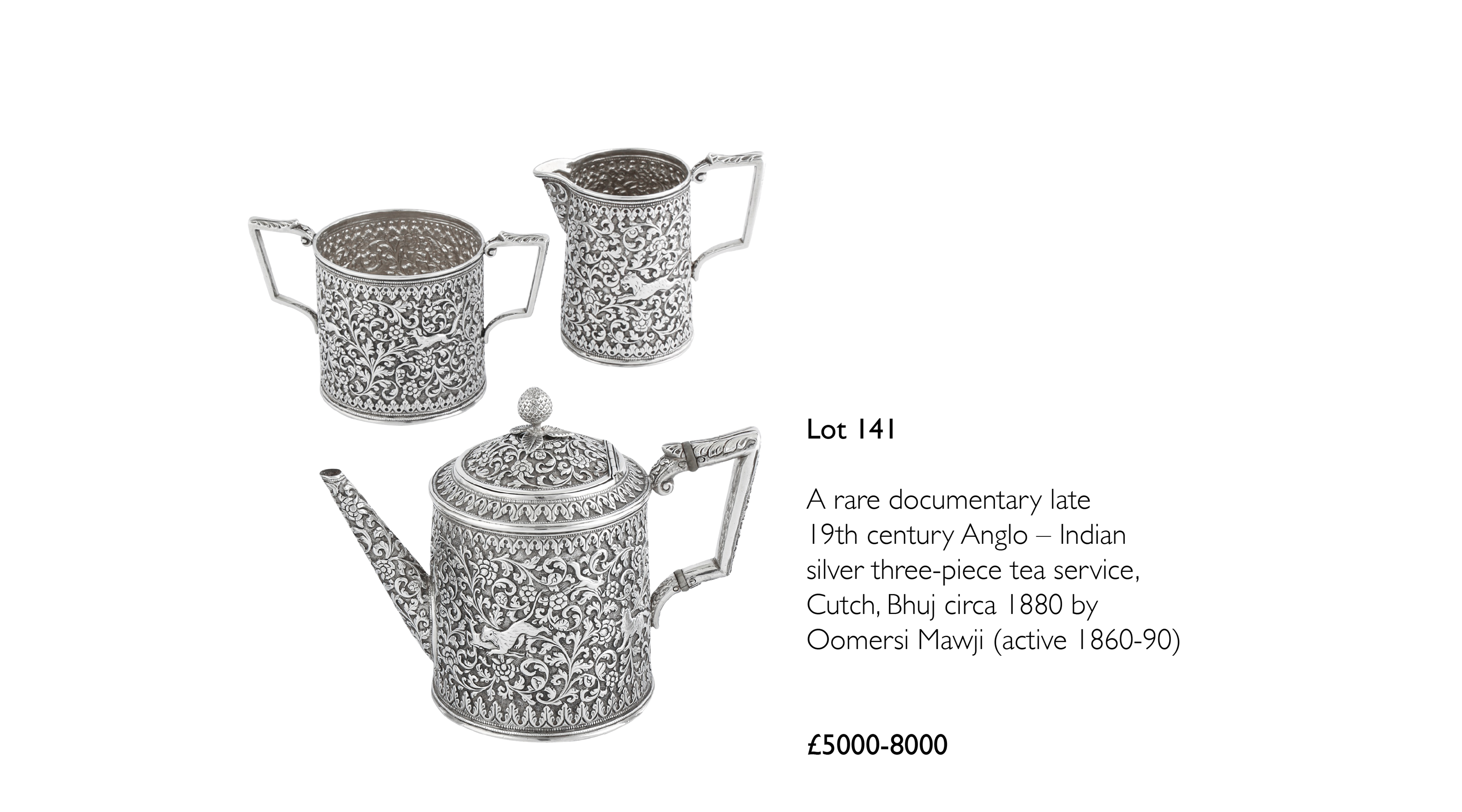 Lot 141 is spectacular: a rare silver three-piece tea service, circa 1880, by Oomersi Mawji.  This set comprises of a teapot, milk jug and a twin handled sugar bowl, each of cylindrical form with moulded corded edges. The teapot has a lid surmounted by a detachable finial formed as a lychee atop of three leaves .The bodies of all three parts of this set carry elaborate embossed decoration of foliate scrolls and rosettes interspersed with animals: on the teapot a dog chasing a hare; birds; a wolf observing a squirrel and a gazelle being attacked, all between bands of stylised acanthus leaves. The spout, lid and handles are similarly decorated with chased foliate scrolls and rosettes. All beautifully realised, it is astonishing to see the amount of detail so proportionally and carefully applied to these items.

This set has been deemed worthy of inclusion in Wynyard Wilkinson’s important 1999 work Indian Silver 1858-1947: Decorative Silver from the Indian Sub-Continent and Burma Made by Local Craftsmen in Western Forms [London, 1999].

Finally we offer Lot 140, a fine unmarked silver butter dish on its stand, attributed stylistically to Oomersi Mawji and his workshop.  Dating from the Raj period, the dish is of hemispherical form, with cast and applied twin handles formed as elephant’s heads. The domed pull-off lid is topped by a detachable cast finial formed as a sitting monkey with its tail behind, humorously being a Bonnet macaque holding a mango. The circular stand features the now familiar chased decoration of foliate scrolls and rosettes, between borders of stylised acanthus leaves. The lid and the base have vacant shield-shaped cartouches and there are traces of gilding.

For lot 140 we have commissioned Wynyard Wilkinson to produce a short text putting this piece in context within the oeuvre of Mawji: 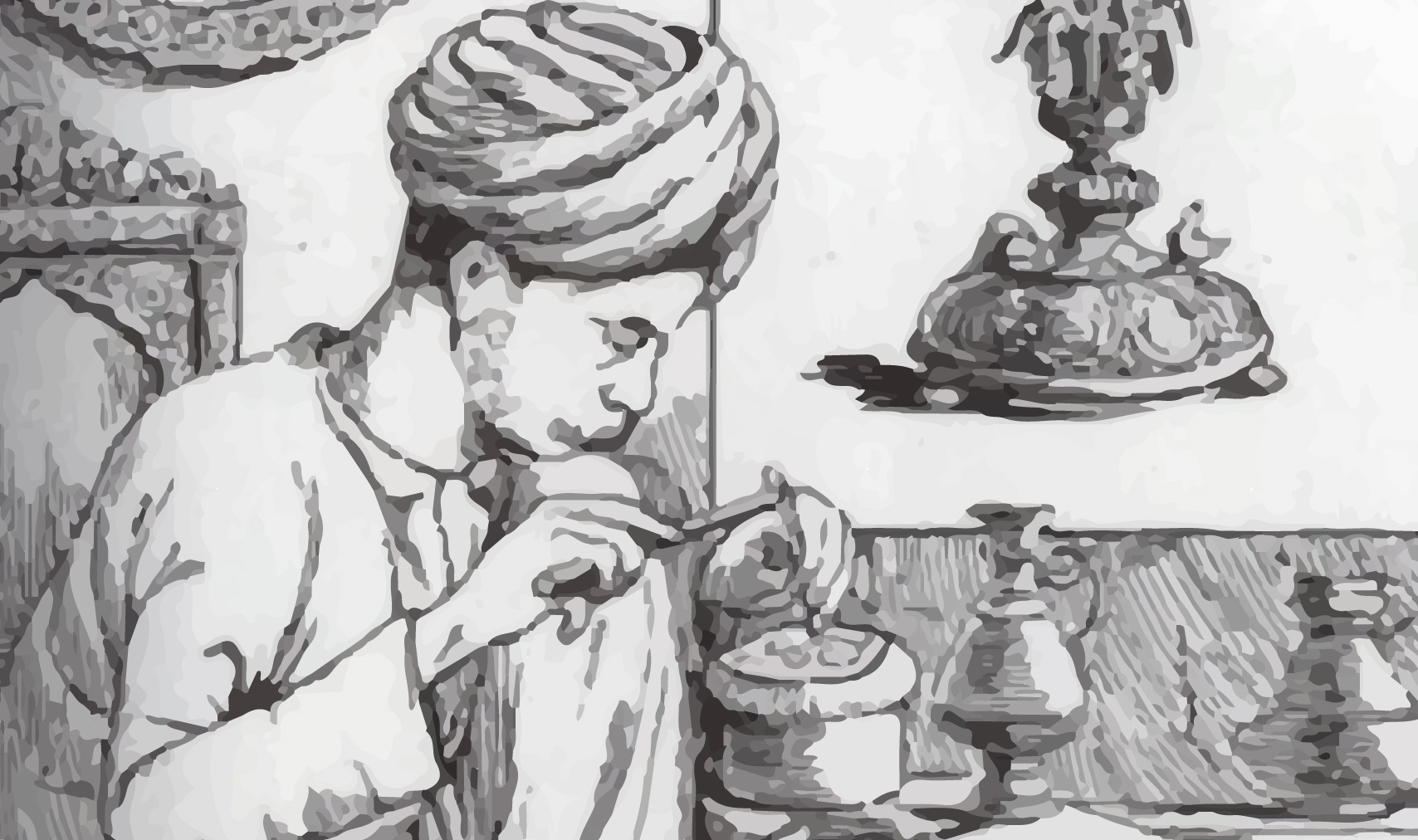 Of all the Indian silver producing artisans in India, one name stands out as associated with pieces of the very finest quality: Oomersi Mawji.  Pieces by this accomplished master began to appear circa 1860 and they continued to be produced by his sons and grandsons well into the twentieth century.

There is no doubt that Oomersi Mawji was one of the most gifted silversmiths working anywhere in the world during his lifetime. His understanding of form, proportion and decoration, his willingness to devote extra labour to a piece to truly perfect it to world-class standards, and his use of an extremely high grade of silver (often 98 per cent pure) combine to lend even the most mundane objects an aura of grandeur, placing this artist in the ranks of the finest craftsmen. The standard of quality, workmanship, and design, often enhanced with a little humour (the monkey finial in this instance) were passed to the artist’s progeny and characterise their work as well.

With its sensuous forms and intricate ornament, the work of Oomersi Mawji has enormous appeal.  Every painstaking detail covering almost the whole surface of each object is an element drawn from nature.  Sinuous plants coil and wind in infinite undulating, swirling patterns through which emerge stylised poppies, which curl and twist to reveal every stage of flowering.

The dish and stand showcased here serves to illustrate many of the characteristics of the best Cutch workmanship.  Here, the fine casting of the elephant head handles, whose incorporation into the design emphasises the three-dimensional aspect of the decoration of this piece.  The rather bored looking monkey finial only adds to its visual appeal.

On view: come and see them for yourself!

We very much look forward to sharing the joys of fine silversmithing with you and seeing you at The Barley Mow in Chiswick, or online and by telephone for the sale itself. 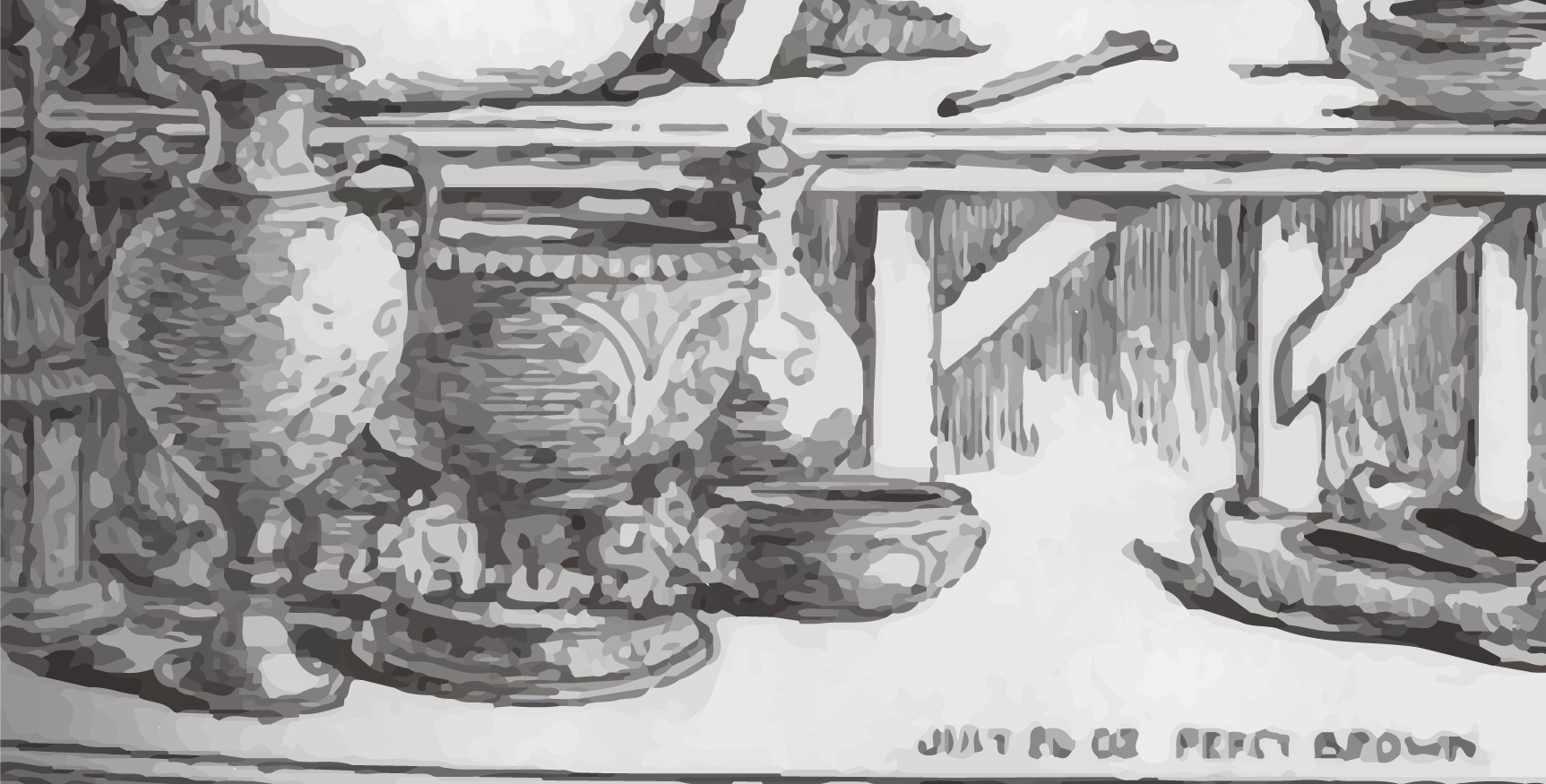