Mongolian Art - Thinking Outside the Box 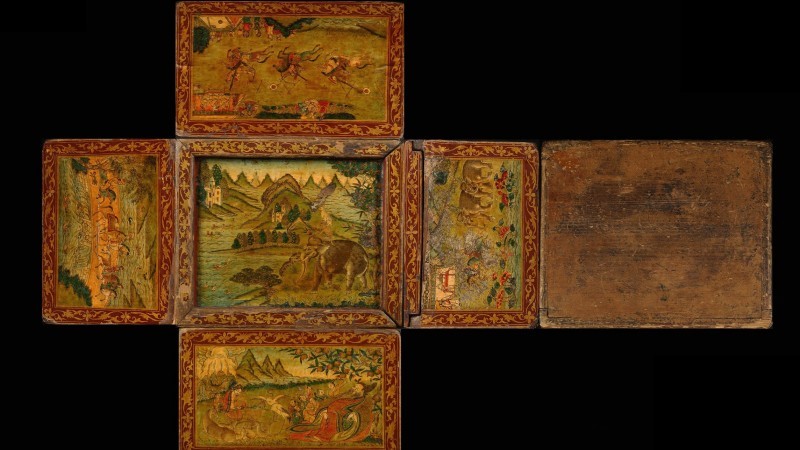 The present box, to be offered as lot 182 in ASIAN ART, 1 September 2015, is a rare and exquisite example of the virtuosity of Mongolian artists of the late 19th Century, presents a compelling story of the cross-cultural synergies afoot within the visual arts across the Tibeto-Mongolian landmass at the time, all the more intriguing for the paucity of comparable published examples in the Western literature. A careful examination of the visual language of the present piece across its five painted sides reveals a combination of Chinese, Tibetan, central Asian and Russian influences all blended with indigenous Mongolian artistic traditions.

The European style of the buildings on the upper face of the box point to the familiarity with Russian architecture, undoubtedly linked to the large Russian contingent within Mongolia’s diverse multicultural population. Populations were mobile and highly skilled itinerant painters are known to have plied their trade across both Mongolia and Tibet.

Indeed it is in Tibetan painted wooden furniture that some of the closest visual corollaries to the present piece may be found. Two useful points of comparison come in the form of the 19th Century Tibetan painted wooden chest, published in Buckley’s Tibetan Furniture (pl. 149), and the Haywood wooden painted cabinet, in Kamansky’s Wooden Wonders, (pl. 119). The cabinet contains mountainous watery landscape scenes incorporating oversized flowering plants and birds frolicking among waves, all enclosed within a raised floral frame. The details on the chest of an archer riding left to right with his head turned back and shooting a bow and arrow closely mirrors the box’s shooting practice scene in composition, shading, subtle colouring and dynamic tension.

But despite strong Tibetan connections, the Mongolian identity of the figures should not be ignored. The top right of the shooting practice scene depicts figures dressed in white with red hems standing against an open tent beside red lacquered furniture. A similar scene can be seen within the famous “Autumn in Mongolia” by Sharav and painted in the early 20th Century.

But whilst the box is clearly secular in function, much of the imagery derives from Mongolian Buddhism. One side is decorated with a seated figure of Sagaan Ubgen, the Mongolian God of longevity, surrounded by eight boys and a female attendant, the figure sits below a flowering peach tree beside a pair of cranes and four deer. This imagery, recognisable to a Chinese audience, has a localised Mongolian character comparable to known Mongolian examples (for a more detailed discussion see Birtalan 2013). The cover is painted with the four friends, of whom the elephant, monkey and hare are still extant, another favorite within the Mongolian visual canon.

Bartholomew and Berger, 1995, Mongolia: The Legacy of Chinggis Khan.

Birtalan, 2013, The Textual and Iconographic Tradition of the Cult of the White Old Man among the Mongols, in The Mongolian Collections Retracing Hans Leder, pp 84 – 94.

Fontein, 1999, The Dancing Demons of Mongolia.