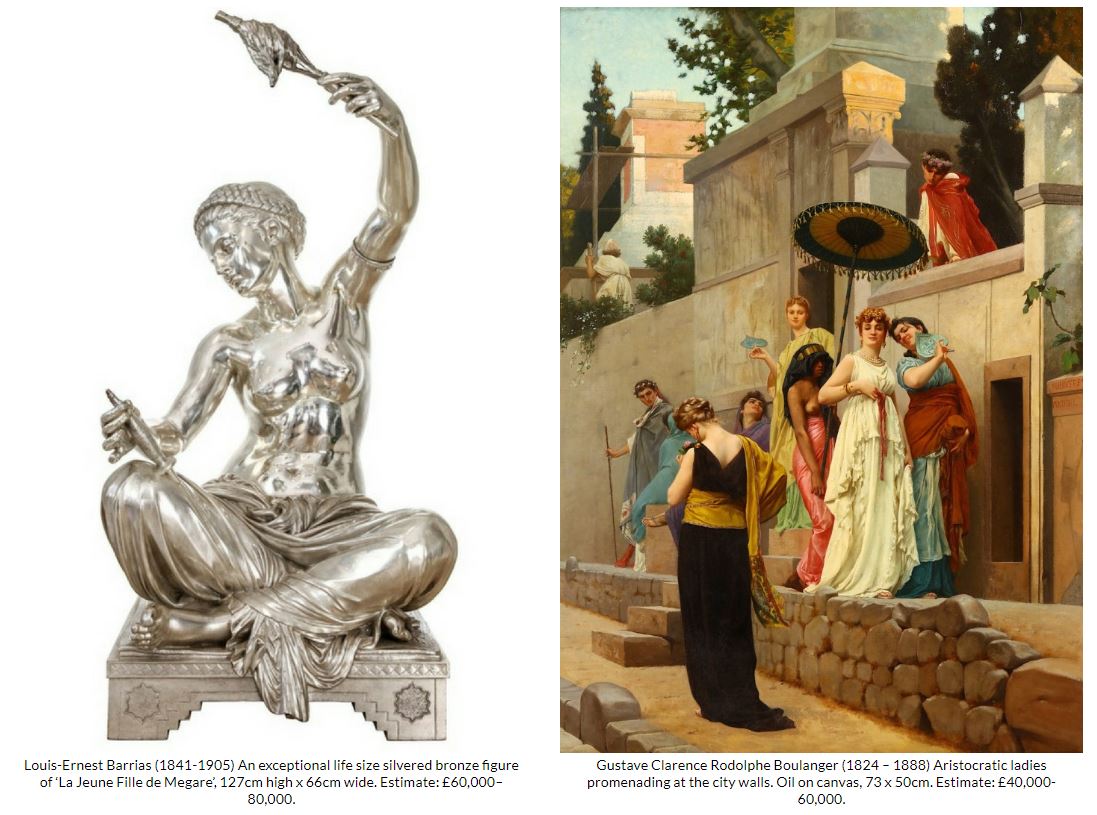 Four exceptional and museum-worthy sculptures, all privately consigned, are to be offered in the forthcoming sale of Fine European Works & Clocks of Art taking place on the 21st March. Perhaps the most historically important is a life-size silvered bronze figure of a spinning girl, ‘La Jeune Fille de Mégare’ by Louis-Ernest Barrias (1841 - 1905); a French sculptor of the Beaux-Arts school. The bronze was exhibited at the Vienna Exhibition of 1873 together with an identical marble statue of the same size which was purchased by the French state and is now housed in the Musée d’Orsay, Paris.

Also shown at the Vienna Exhibition at the same time as Barrias’ masterpiece is the elaborately staged, Neo-Grec oil on canvas by Gustave Boulanger ((1824-1888). Renowned for his classical and orientialist subjects, Boulanger was a French figure painter who became a member of the Institut de France in 1882 and was the recipient of many prestigious medals. Consigned by a separate private owner, the work depicts luxuriously-dressed aristocratic ladies promenading at the city walls and is offered in the auction of British & European Fine Art with Portrait Miniatures on the 20th March. Both artists were awarded the prestigious Prix de Rome; Boulanger in 1849 and Barrias in 1865. Barrias studied at the Ecole des Beaux-Arts, Paris and after he won the prestigious Prix de Rome, he was entitled to study at the French Academy in Rome, then based at the Villa Medici. It is here, surrounded by ancient marbles and classical works that he first began work on this seminal sculpture.

'The influence of the ancient world is apparent not only in the theme but in the stylistic qualities of the sculpture. 'La Jeune Fille de Megare' depicts a seated youthful girl spinning, for wool production was the main export of her home; the small Greek port town of Magara, in ancient times. She is depicted nude, but not in any overtly erotic sense; for her pose is refined, static and balanced in the classical tradition; her gaze is measured and her gestures are graceful and poised. She is seated on a low stool designed in the Neo-Classical taste and is depicted as an idealised beauty rather than as a portrait of a particular girl. Her features are generalised and finely proportioned, and she performs a simple, every day act but with a graceful movement that emphasises her female form.' - Rachael Osborn-Howard, Head of Fine European Works of Art & Clocks

Reductions of Barrias’ other bronzes have come to auction in recent years and realised very strong prices, however, no such reductions of this sculpture were ever made. Therefore, the re-emergence of this exhibition piece presents a unique opportunity to acquire a work of true art-historical importance by this renowned sculptor. 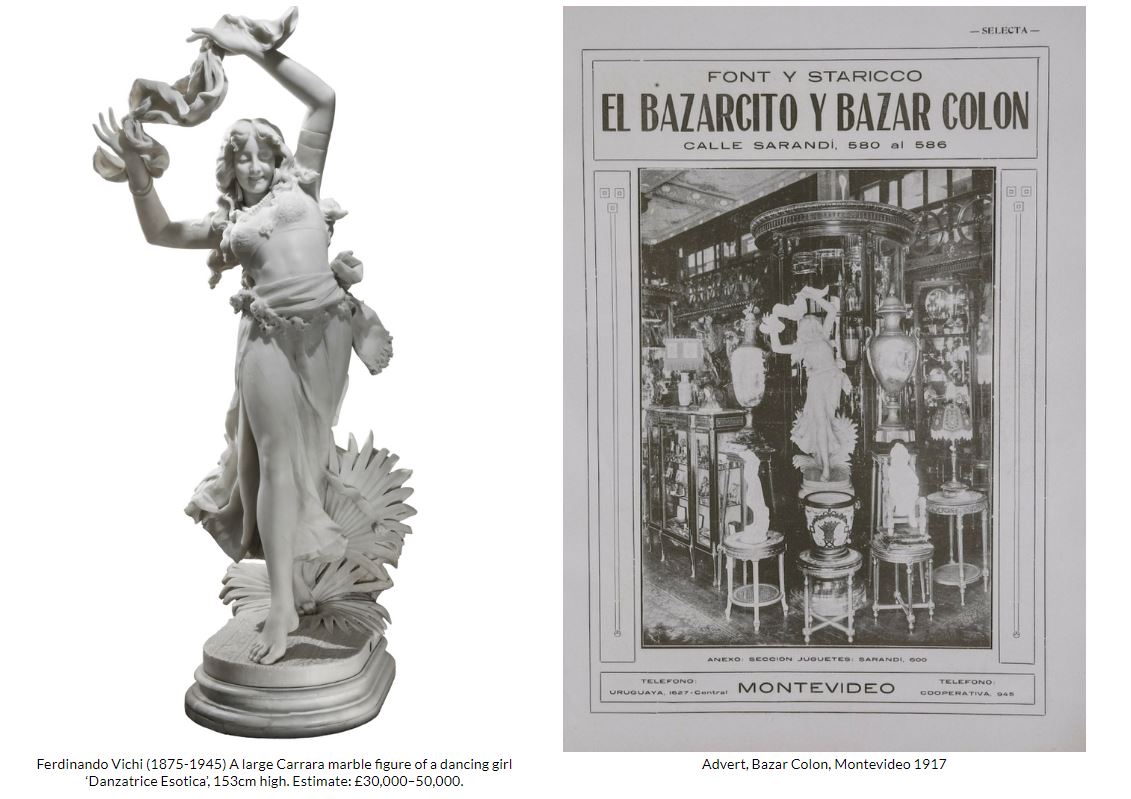 Of the other three sculptures, a large marble figure of a dancing girl, the 'Danzatrice Esotica', by the highly respected Ferdinando Vichi, is offered with an intriguing and well-documented provenance. Although carved in Florence, the sculpture is signed ‘F. Vichi, Salon 1914’; the last Paris Salon to take place before the Great War.

'The 'Danzatrice Esotica' demonstrates the high technical virtuosity of this talented sculptor who manages to create a variety of textures and surfaces from the hard crystalline surface of the white marble. Highly respected during his lifetime, Vichi was part of a group of Italian sculptors who exhibited at the Bazzanti Gallery in Florence, including Cesare Lapini, Pietro Bazzanti and Guglielmo Pugi.' - Rachael Osborn-Howard, Head of Fine European Works of Art & Clocks

The work also bears a small medallion for the ‘Bazar Colon, Montevideo’ and appears in a photographic advert for the gallery in 1917. The work has remarkable provenance which led her escaping Paris on the cusp of war and arriving in Uruguay at the ‘Columbus Gallery’ or ‘Bazar Colon’ as it was known. The sculpture made her way back to Europe by the 1970s where she was purchased by the current owner from a gallery in Geneva. 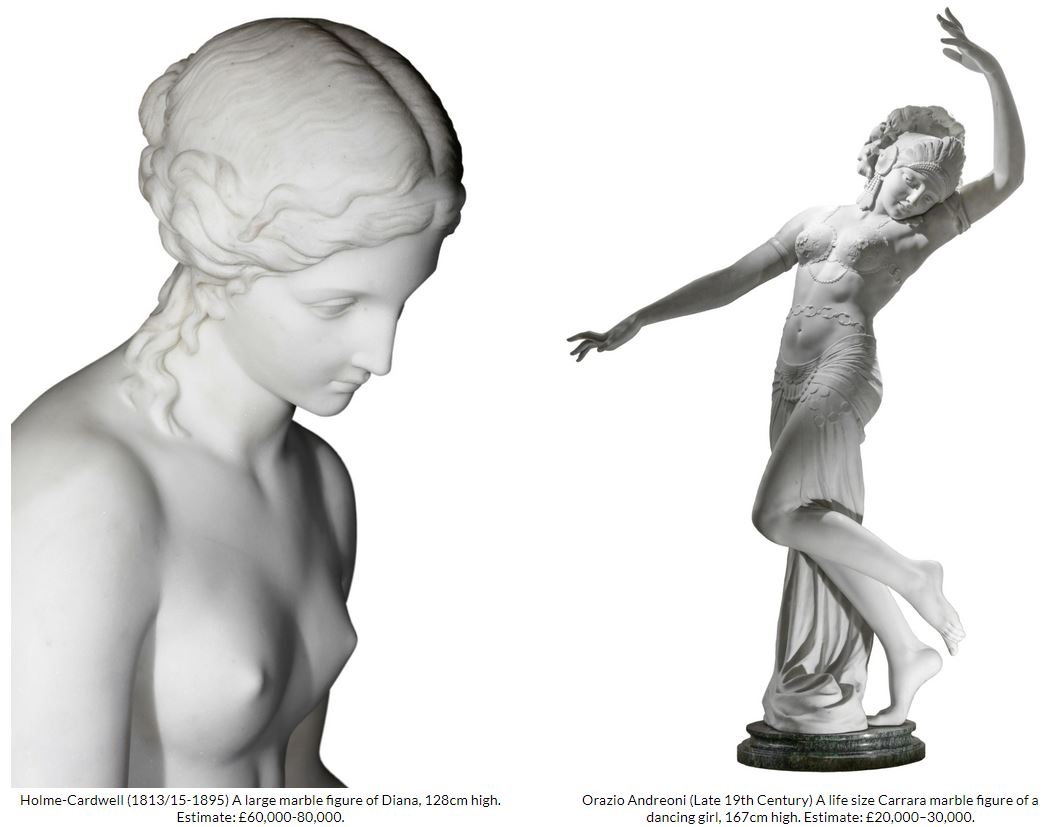 From the same Swiss gallery the owner also purchased another life-size marble figure of a dancing girl, by Italian sculptor Orazio Andreoni, which is also offered in the sale.

'Orazio Andreoni was based in Rome and established a large and successful workshop there, training many other sculptors such as Emilio Fiaschi, Antonio Rossetti and Oscar Spalmach. Andreoni's marble figure clearly demonstrates the sculptor's expertise with the material, for here reality is momentarily suspended as we admire the flamboyant dancer, her exaggerated pose as she rests her full body weight solely on the tip toes of one foot, her body seemingly suspended in the air and her gauze-thin drapery falling in soft folds to the ground. The technical skill required to carve this complex pose from the solid marble is immense, and would have been too great a challenge for all but the most talented of sculptors. For here Andreoni allows us to momentarily believe that he has created life from this most solid and dense material, he has recreated the softness of skin, flesh and bone, with nothing more than a chisel.' - Rachael Osborn-Howard, Head of Fine European Works of Art & Clocks

The final sculpture is an important marble figure of ‘Diana about to Bathe’ by Holme-Cardwell. The form of this beautiful Neo-Classical sculpture is derived from a monumental marble Diana that Holme-Cardwell carved in Rome in 1862 and was shown at the London International Exhibition in the same year.  This smaller marble at 128cm high was most likely produced for a specific commission by a patron who would have seen the monumental Diana and desired his own version.

In addition to the monumental Diana, Holme-Cardwell also exhibited two other sculptures at the International Exhibition, 'Pan and Cupid' and 'Sabrina', both of which are now housed in public institutions. The former was gifted to the V&A in 1871 whilst ‘Sabrina’ is now in the Hove Museum, Sussex, demonstrating the high regard with which the sculptor’s work was held in his lifetime and remains so today.

'The exquisite modelling of Diana's nude physique and the idealised beauty of her facial features are combined in a marble figure that embodies both the ideals of the neo-classical style and the skill of the talented sculptor who carved her realistic figure from a block of marble. When the monumental Diana was exhibited in 1862 she was titled 'Diana about to Bathe', a title which provides a narrative for the elegant nude figure which in this example, lacks all attributes; for she has undressed and has removed her shoes and bow and quiver of arrows in order to bathe. The Handbook to the exhibition compared the Diana to the famous neo-classical sculptures of Bertel Thorvaldsen and Antonio Canova, further evidence of the high regard this sculptor enjoyed both during his lifetime and beyond, and placing him firmly among the masters of his generation.' - Rachael Osborn-Howard, Head of Fine European Works of Art & Clocks

All works are now on view at South Kensington until the 14th of March and at the Chiswick Saleroom from the 16th March until the sale date.