Exploring themes across different media in the late 17th and ear

Chiswick Auctions’ dedicated sale of “Kangxi: Porcelain and Decorative Arts”, 12 November 2018, provides a unique opportunity to explore the range of artistic expression of the period by a comparative analysis across categories of materials which are often differentiated either whether academically of through collecting practices. Through reference to lots in the upcoming sale, Lazarus Halstead, head of Asian Art, examines in turn how decorative themes, painting, literature and religious iconography find expression across the categories of porcelain, lacquerware and a soapstone carvings.

Prunus
The decorative style of the Kangxi period is perhaps most characteristically represented in the minds of the Western audience by the blue and white porcelain which reached its height in popularity through its collection in the early 20th Century by the millionaire American tycoon collectors. The trend was created by such artists as J M Whistler who depicted blue and white Kangxi porcelain in his paintings and the most iconic form in the Western market was perhaps the ‘hawthorn’ jar, which actually depicted prunus blossoms falling onto cracking ice, a typical scene in export porcelain. The record price of 6,195GBP (5900 guineas) was paid at Christie’s for a blue and white Hawthorn jar which sold at Christie’s to Lord Astor of Hever.

Prunus, or plum blossom (meihua) is one of the “three friends of winter” together with bamboo and pine and it symbolises perseverance and purity. Whilst we have an example of prunus in the blue and white palette we are lucky to also have examples in wucai as well as prunus incised into bronze and inlaid in mother-of-pearl and coconut shell, into black lacquer. 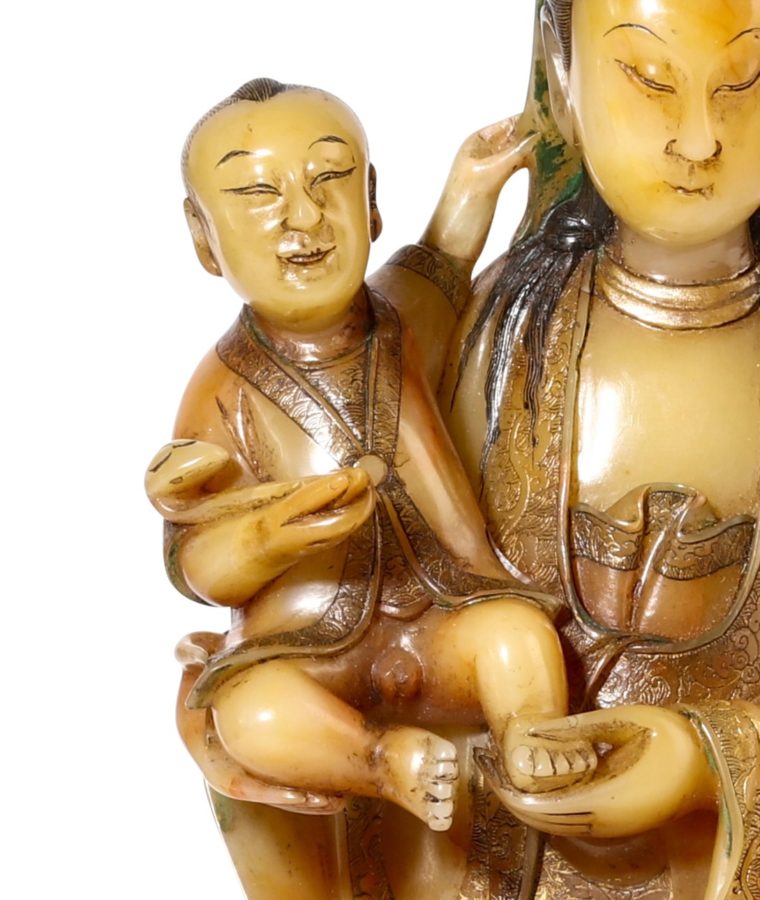 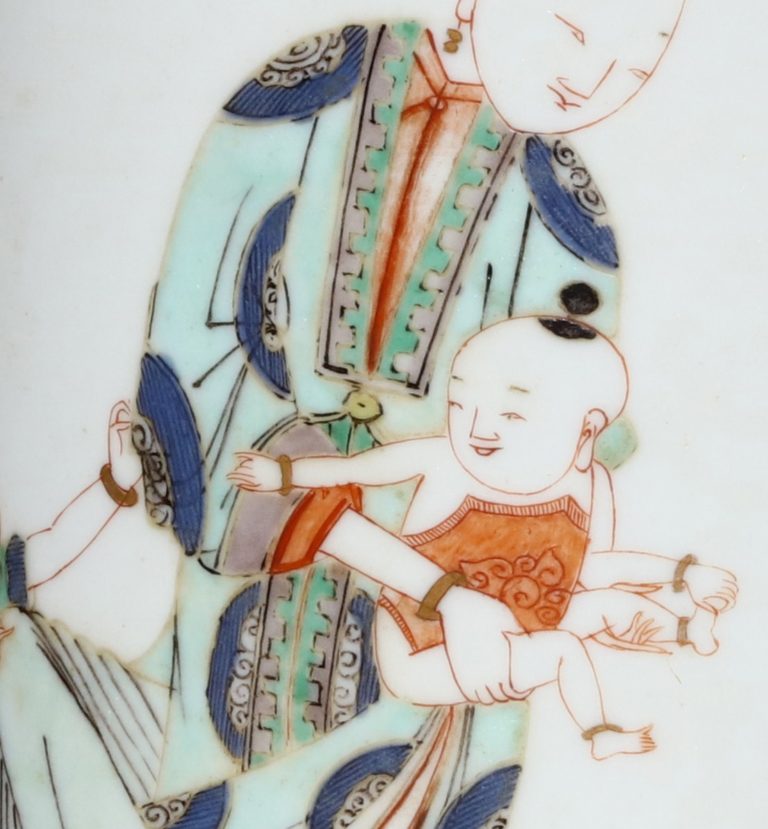 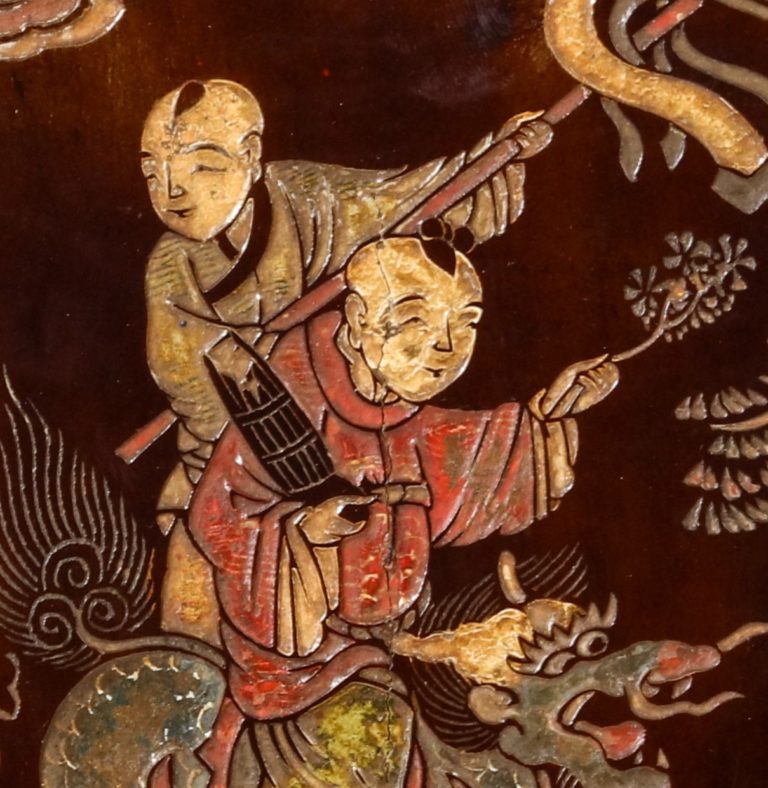 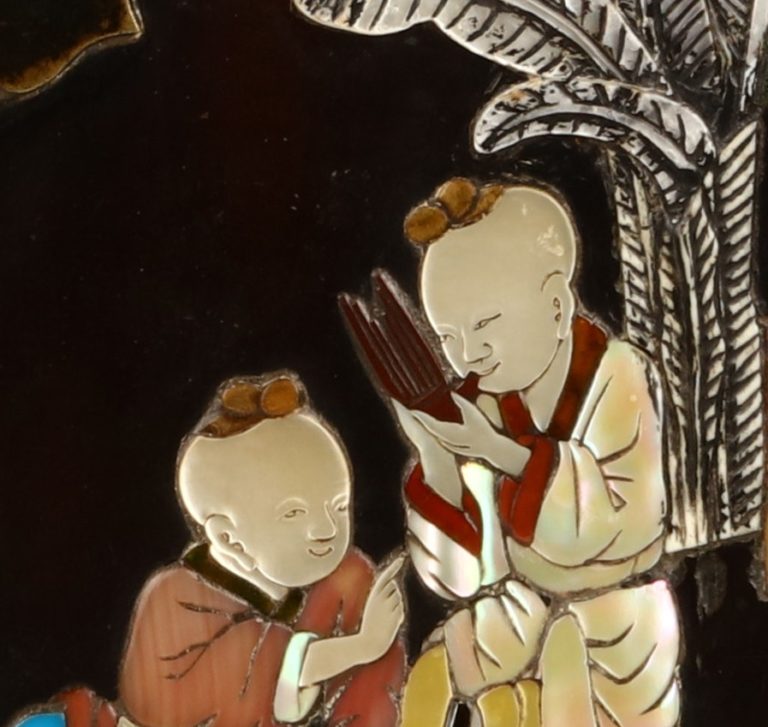 One of the most ubiquitous and recurring subjects of Kangxi artworks is the boy or group of boys. Symbolic of a wish for many sons and a plentiful future, boys are often involved in visual puns. For example a boy holding a vase (ping) represents harmony, a boy holding a specific musical wind instrument (sheng), is a pun on the word to ascend. Boys are often depicted in groups or with ladies. The symbol of the boy with Guanyin in the case of the soapstone carving has also been considered to bear influence from the Western image of the Madonna and child. Examples of boys in the sale are painted in underglaze blue, enamelled in wucai, moulded in porcelain, inlaid in mother-of-pearl or hardstones, carved into wood, and carved from soapstone. 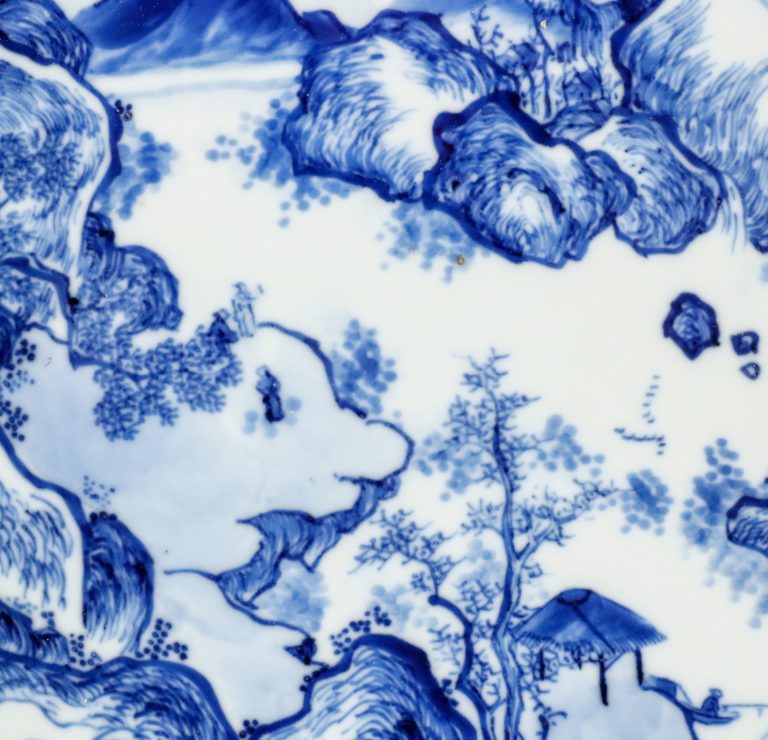 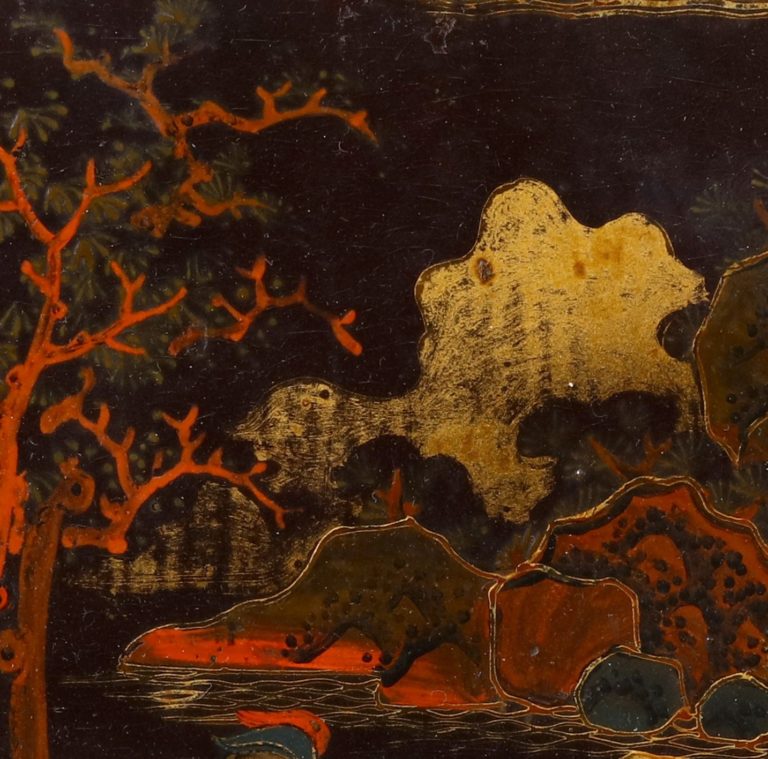 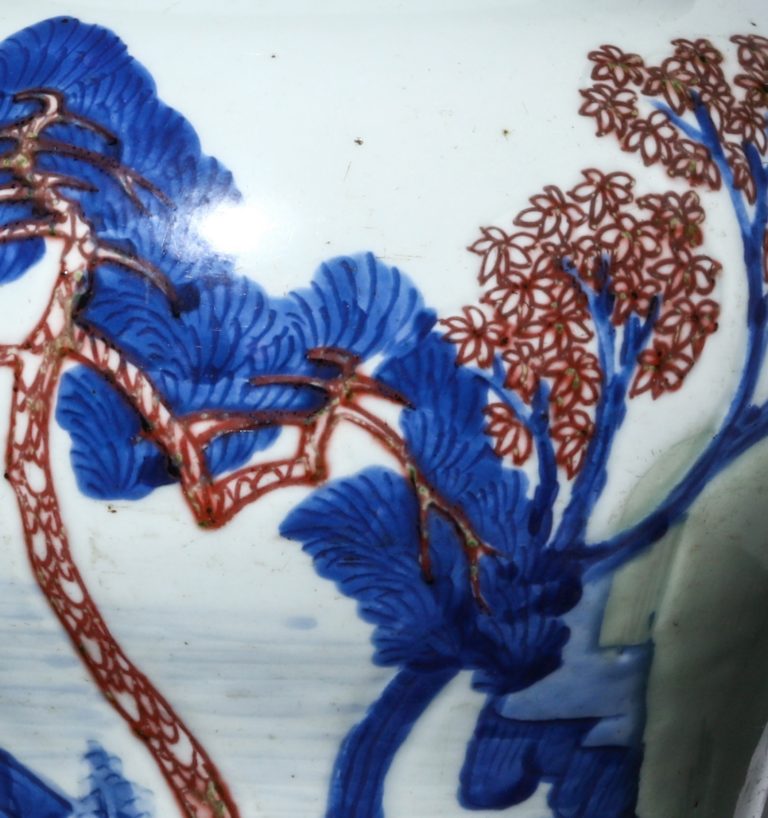 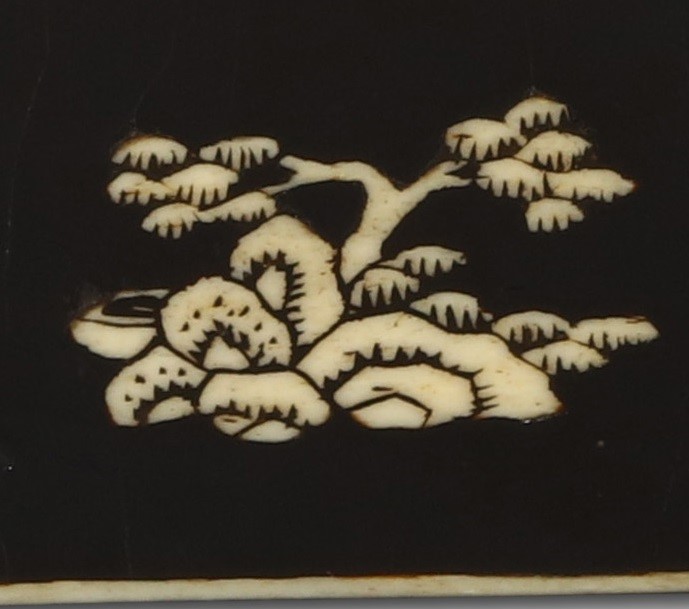 As the cornerstone of ink painting, landscape painting has been applied to porcelain and lacquerware in creative ways which take extend the formal opportunities and constraints of the media.
In blue and white decoration, the luminocity of the glaze, brilliant white of the porcelain and underglaze cobalt blue allow for a vivid depiction of watery landscapes which also take full advantage of the curvature of the surface, wrapping around vases or framed within gently curving borders in dishes. The inclusion of raised or incised decoration also adds another dimension to the depiction of landscapes which is particularly effective over a curved surface. The depiction of landscape scenes on black lacquer provides an effective inversion of the usual on-white painted landscapes and addition of gilt provides a further play with depth of the visual field.

Much of the figurative decoration on Chinese porcelain during the Kangxi period derived from woodblock prints of important literary classics. The “love chase scene” is commonly depicted on porcelain and derives from the classic Dream of Red Chamber. 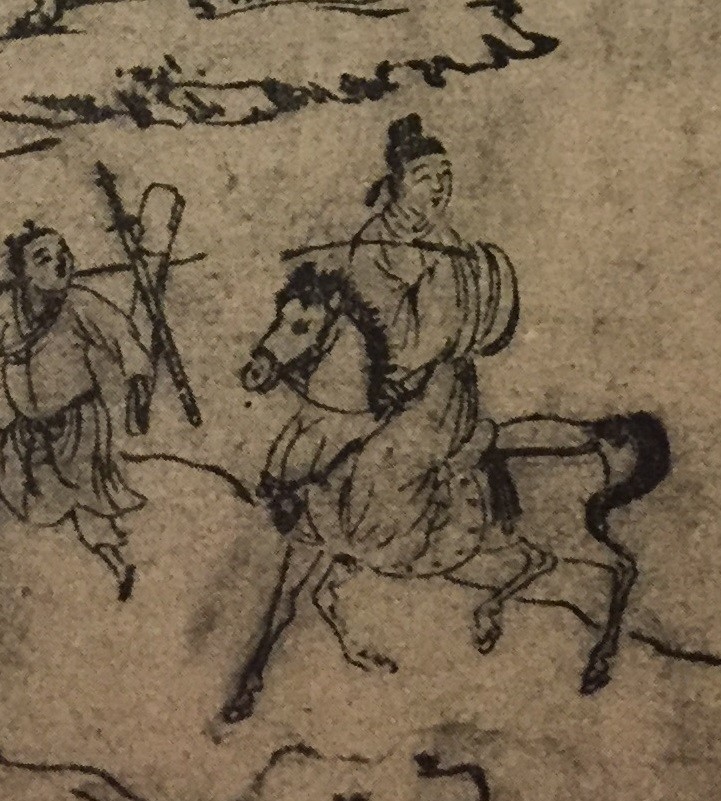 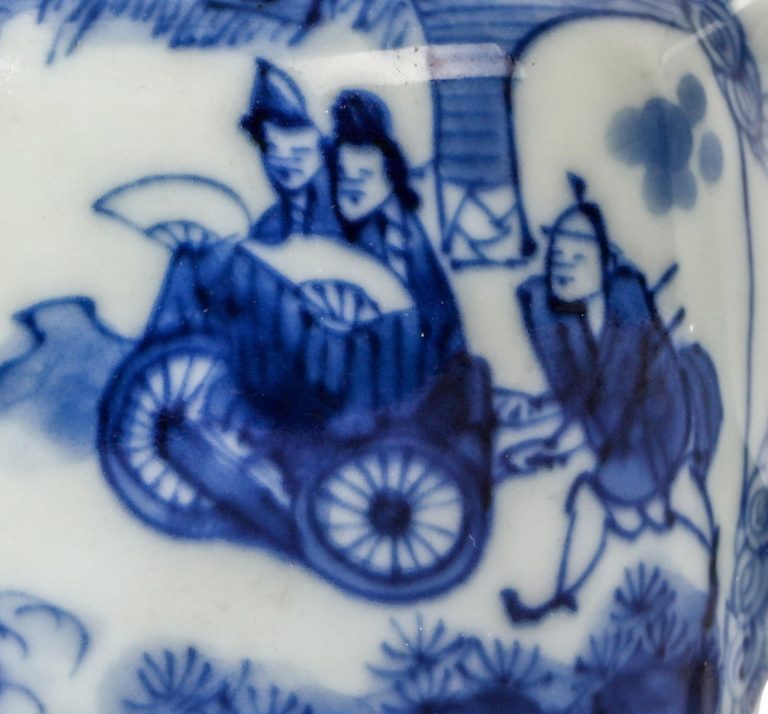 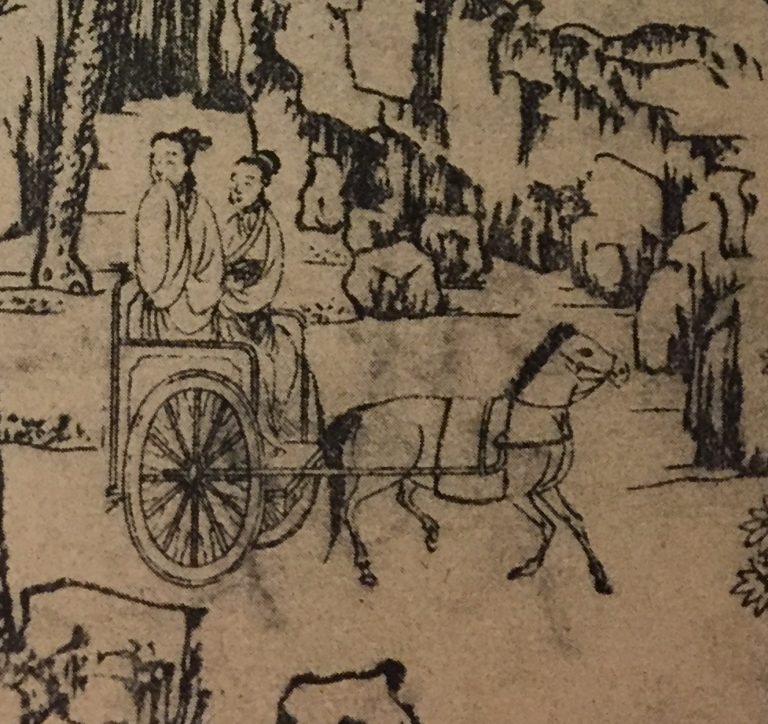 Another important text was the Imperially commissioned Gengzhi tu in 1696. This text depicting the processes of tilling and weaving underlies the important status of technology within the Kangxi period. 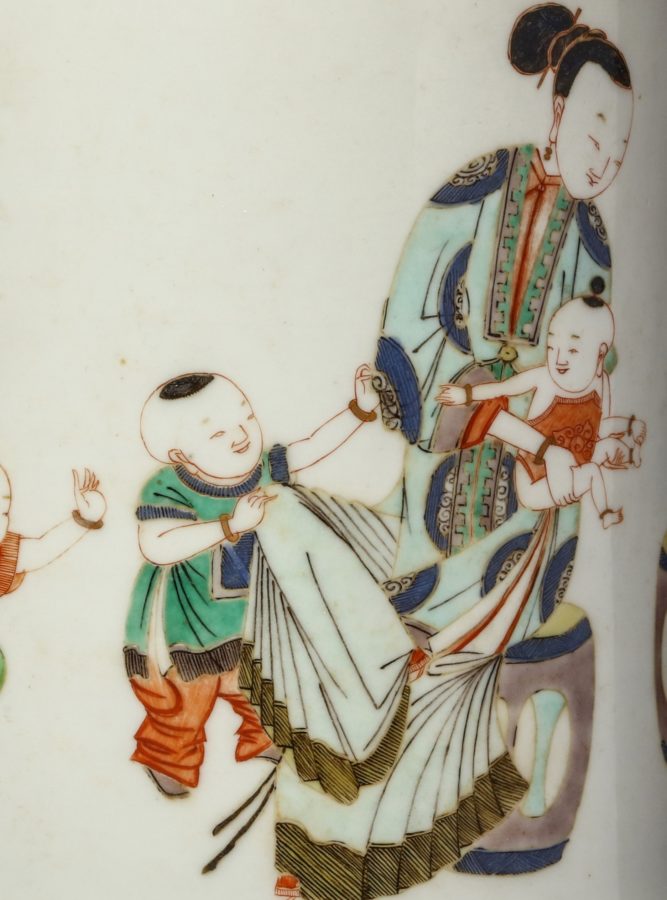 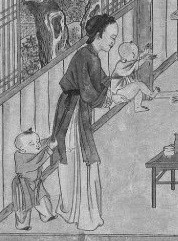 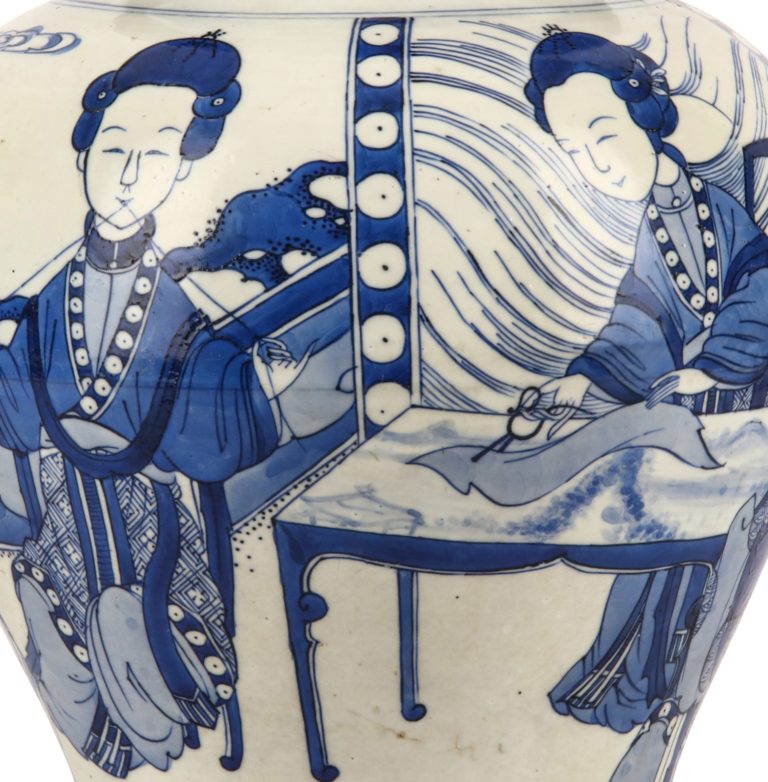 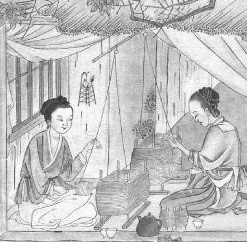 The Kangxi Emperor was a devout Buddhist and it is argued that his promotion of Buddhism also help to control the Mongal tribes along the Northern border. He produced more than four hundred handwritten versions of the Heart Sutra and Medicine Buddha Sutra and commissioned large-scale gilt-bronze figures of Buddhist deities. 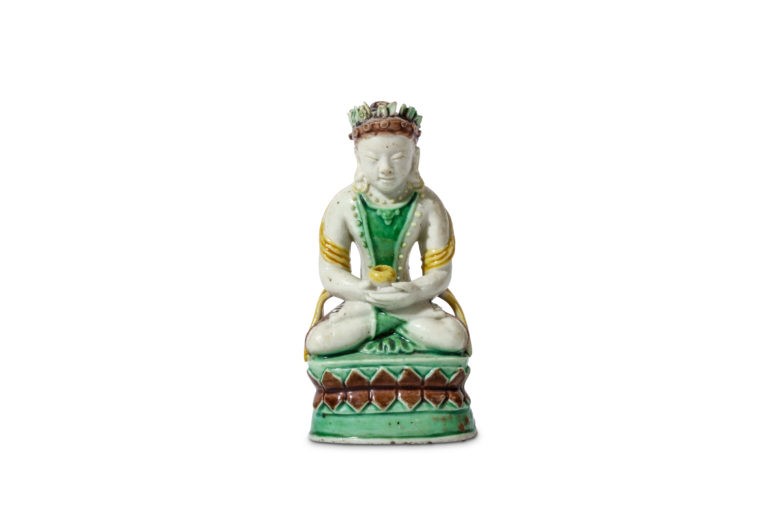 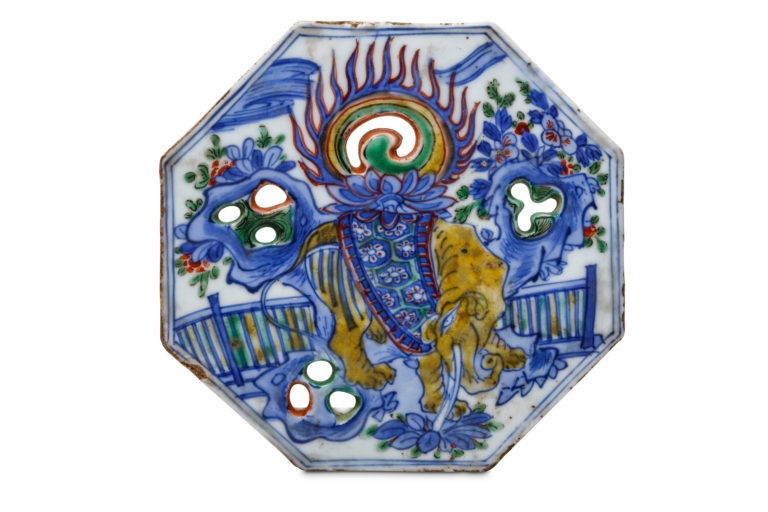 Highlights from the sale: 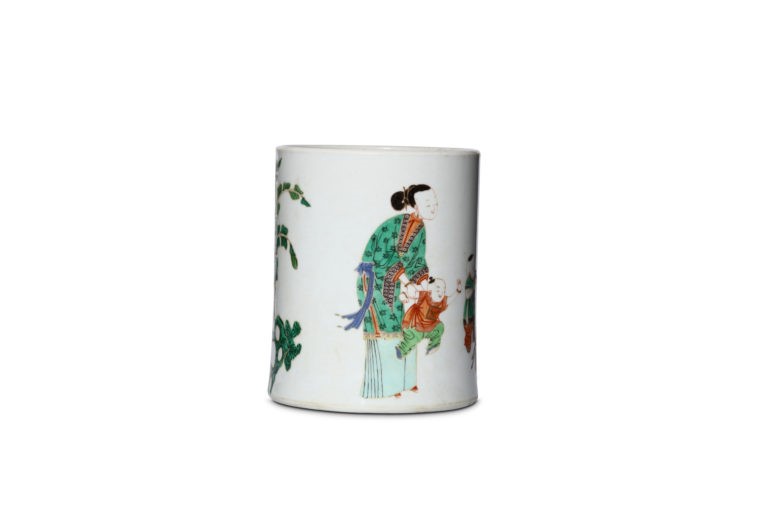 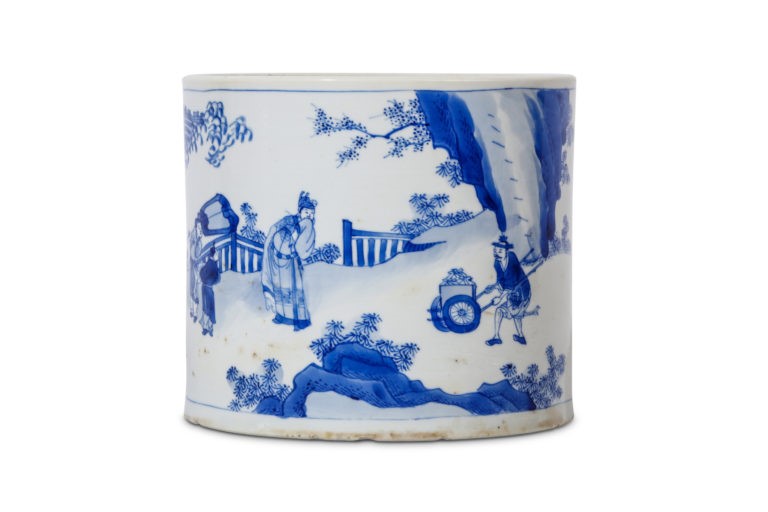 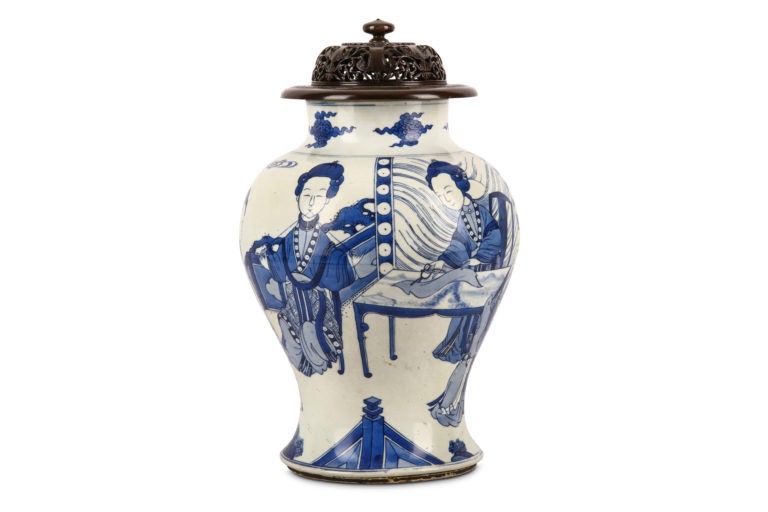 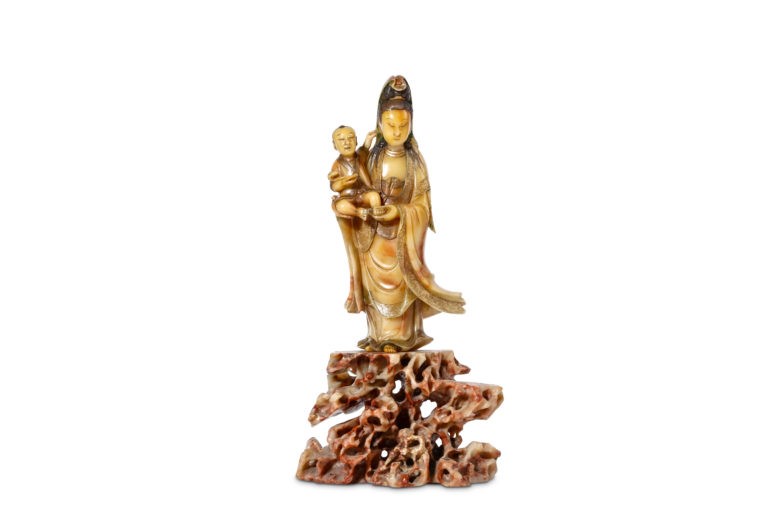 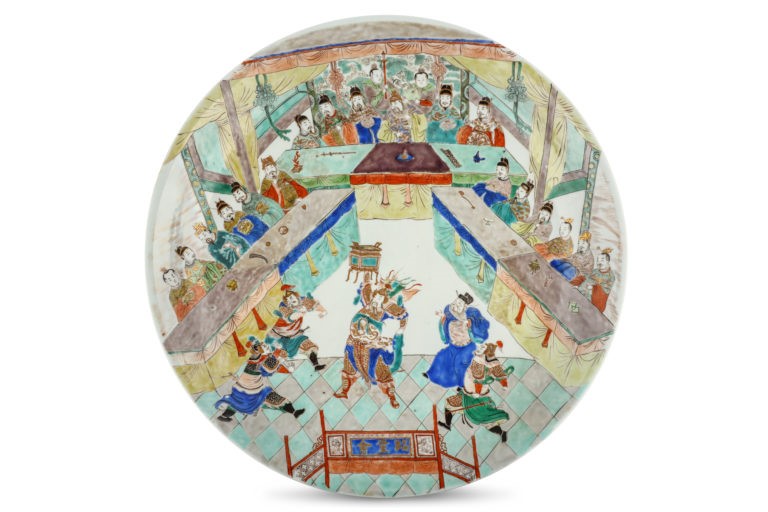 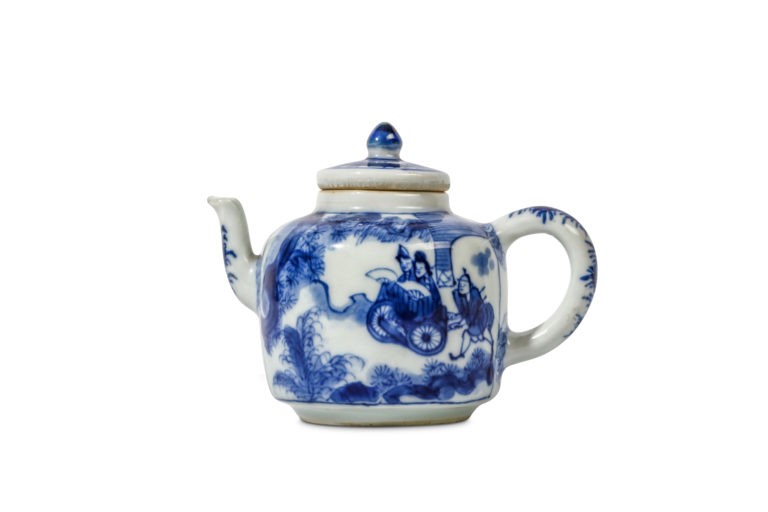 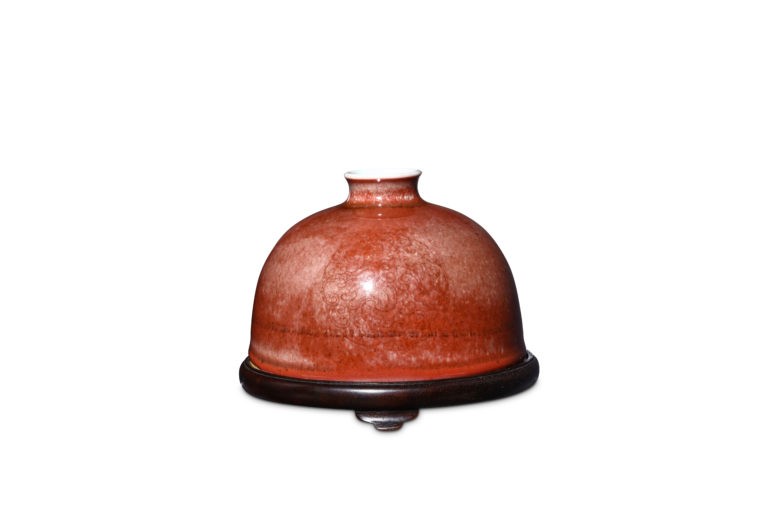 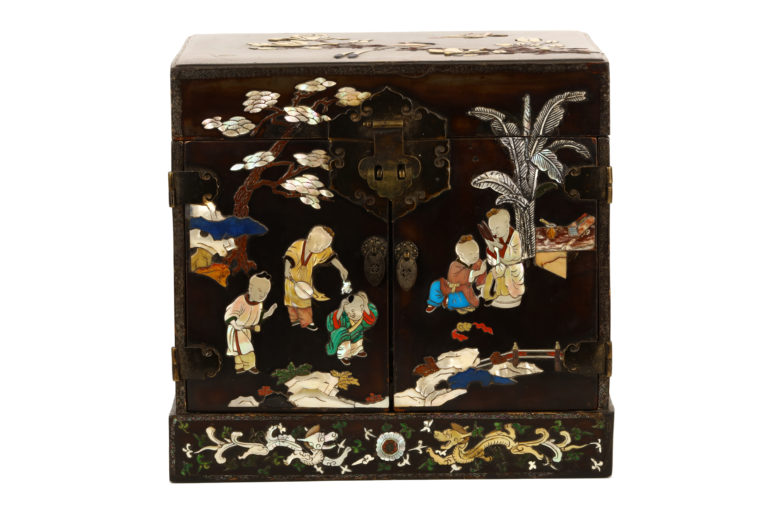