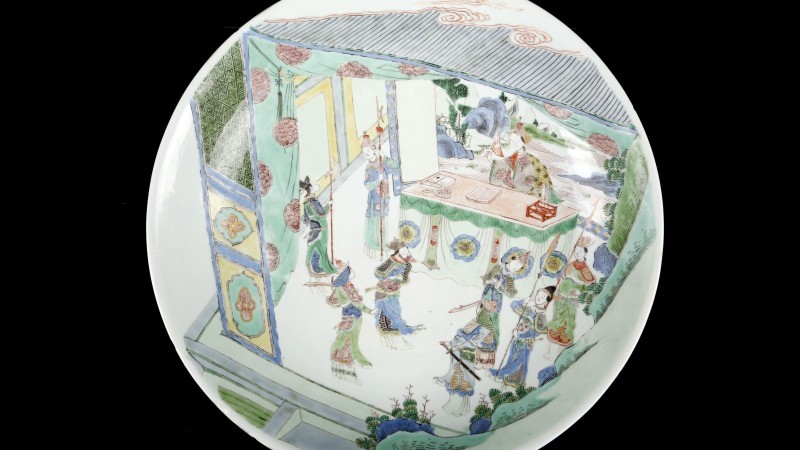 A recent consignment for Chiswick Auctions upcoming Asian Art sale on 1st September presents an eye-opening picture of subversive female behaviour for the titillation of Chinese viewers of the late 17th / early 18th Century under the reign of the Kangxi emperor.

Many will be familiar with the story of Hua Mulan, albeit through the Disney cartoon which adapted and popularised her story of concealing her female identity and taking the place of her brother to serve in the army, returning to her family after 12 years of successful campaigns.

The story of the nine women of the Yang family, however, is less well known to a Western audience. Under the direction of the family matriarch, She Taijun, the womenfolk of the family disguised themselves as men and went into battle, to avenge the deaths of their husbands and sons.

The interior of the 33.5cm diameter charger, with shallow rounded sides rising to a slightly everted rim, is painted with an interior scene in a famille verte palette with eight of the women dressed in armour and heavily armed, in front of a desk at which the matriarch sits with a screen painted behind her, depicting a watery landscape scene.

Long symbolic of female empowerment, the feminist icons are here depicted with a sense of fun the central “bearded lady” struggling with her half detached facial hair. The charger will be offered on the 1st of September in the specialist Asian art sale, with an estimate of £600 – 800.

Lot 31: A CHINESE FAMILLE VERTE WOMEN WARRIORS CHARGER. Kangxi. With shallow rounded sides rising to a slightly everted rim, the interior finely painted with a scene of the nine women of the Yang family who, in the Song Dynasty, went into battle after their menfolk died in combat, the scene depicts an interior with one lady seated behind a desk in front of a screen depicting a landscape, 33.5cm diameter. £600 – 800