Intrigue & Alliance in the Early Modern Age - the House of Medici 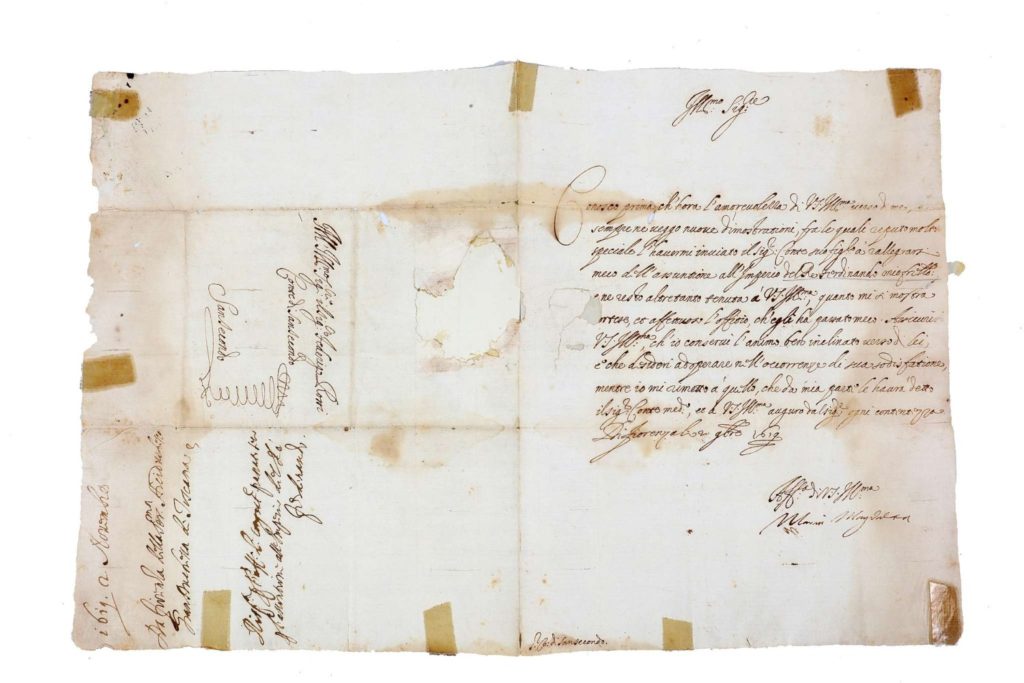 Ahead of the Printed Books & Manuscripts auction on Wednesday 29th November, Junior Specialist Dr. Carmen Donia explores the contents and background of a collection of autographs from the Medici Archive, dated between 1569 and 1824, offered in the sale. Letters related to the Medici and Lorraine family occasionally appear at auction or in the antiquarian market and always gain strong interest as documents symbolic of diplomacy in the early modern age.

The Medici were one of the most important Italian dynasties in the early modern period and the first dynasty to win their status not by warfare, marriage or inheritance, but through commerce. They arrived in Florence in the 12th century and during the next two centuries the family accumulated their fortune through banking and trade. From 1434 onwards, the Medici Court started to play a prominent role in Florence’s political and cultural life. Their support of the arts transformed Florence in the cradle of the Renaissance.

It was during the Reign of Cosimo I (1537-1574) that Tuscany became a modern European State. While Cosimo the Elder was constantly preoccupied with protecting the independence of Florence and reinforcing its political system, Cosimo I consolidated the Medicean power by means of clever strategies of diplomacy, based on a complex network of personal and international relations.

Cosimo I was aware of the need for strong international alliances and was able to gain protection from the Hapsburg Empire, France and the Papacy. His marriage with Eleonore of Toledo, the daughter of the viceroy  of Naples, was a successful move and lead to the independence of Florence. After the end of the Kingdom of Charles V and the treaty of Cateau-Cambresis (1559), Cosimo I forged an alliance with Henry IV of France and his wife Catherine de' Medici and in 1569 received the title of Grand Duke from Pius V.

This diplomatic game can be studied through the extraordinary archive 'The Mediceo del Principato', or Medici archive, created by Cosimo I and his successors. It contains approximately 3 million letters, minutes, correspondences and other documents, mostly housed at the Archivio di Stato in Florence, by members of the Medici family, as well as other notable diplomats and secretaries.

The diplomacy in these documents concerns local and international politics. They are autograph letters from members of the Medici family to ambassadors and representatives of the Italian nobility, discussing international relations, alliances, embassies, controversial events and private affairs. 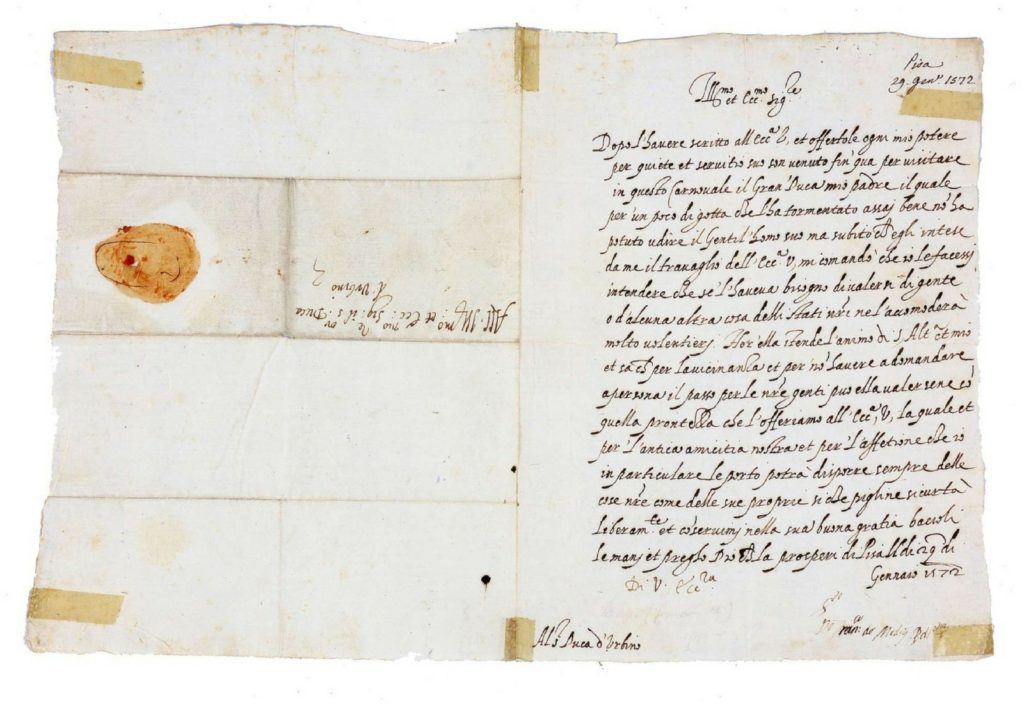 An interesting example is a letter from Francesco I, Grand Duke of Tuscany (1574 - 1587) to Mario Capizzucchi in Rome, regarding the murder of Giovanni Battista Adami, a relative of Lodovico Orsini, by Antimo Capizzucchi.

'It was a very unfortunate chain of circumstances, and if my assured intervention into this matter is beneficial, I will be very pleased.'

Francesco I and his lover Bianca Cappello interceded with the victim’s family, but Antimo was decapitated on the 29th April 1589 by order of Sixtus V.

The Medici Archive also contains a number of letters by female members of the family who enhanced the fame of the Medici dynasty, as demonstrated by a letter from the 'imperious' Maria Maddalena of Austria, (1589 - 1631), the wife of Cosimo II de’ Medici, offered in the sale. The marriage between Maria Maddalena of Austria and Cosimo II was arranged to assuage Spain’s animosity towards Tuscany, caused by the previous Franco-Tuscan alliance. After Cosimo II’s death, Maddalena ruled in competition with her mother in law Christine of Lorraine. 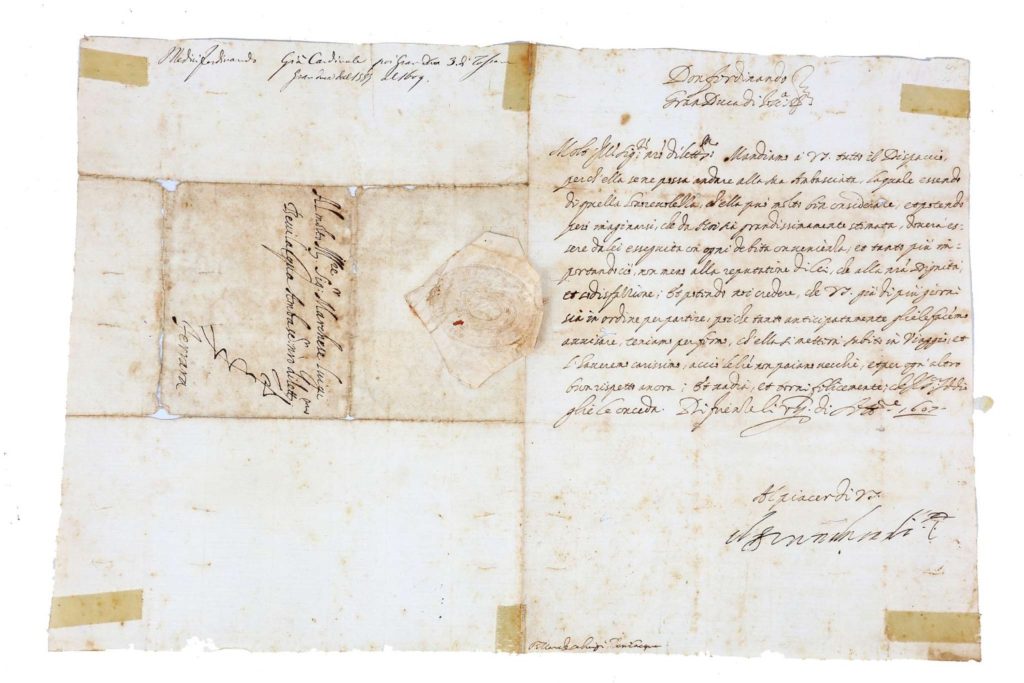 Two letters from Ferdinando I and Maria Maddalena of Austria reveal that Medicean diplomacy was mostly directed towards France and the Hapsburgs (pictured above.)

The first, written in Florence in 1607, is addressed to the Ambassador Marquis Luigi Bevilacqua and refers to an important diplomatic mission to France to forge an alliance with Henry of Navarre against the Hapsburgs.

'We are sending you, Dearest Sir, all dispatches for your diplomatic mission … and, as we predict that it will be of great relevance to everyone, it will have to be managed with extreme accuracy.'

The second is dated 2 November 1619 and addressed to Federico Rossi, Conte di San Secondo, on the election of Maria Maddalena of Austria's brother Ferdinando II of Hapsburg as a Holy Roman Emperor.

The letter contains a thanksgiving to the Conte Federico Rossi 'for sending his son to congratulate me for the Imperial election of my brother Ferdinand.'