In Conversation with – Head of Autographs & Memorabilia Sales 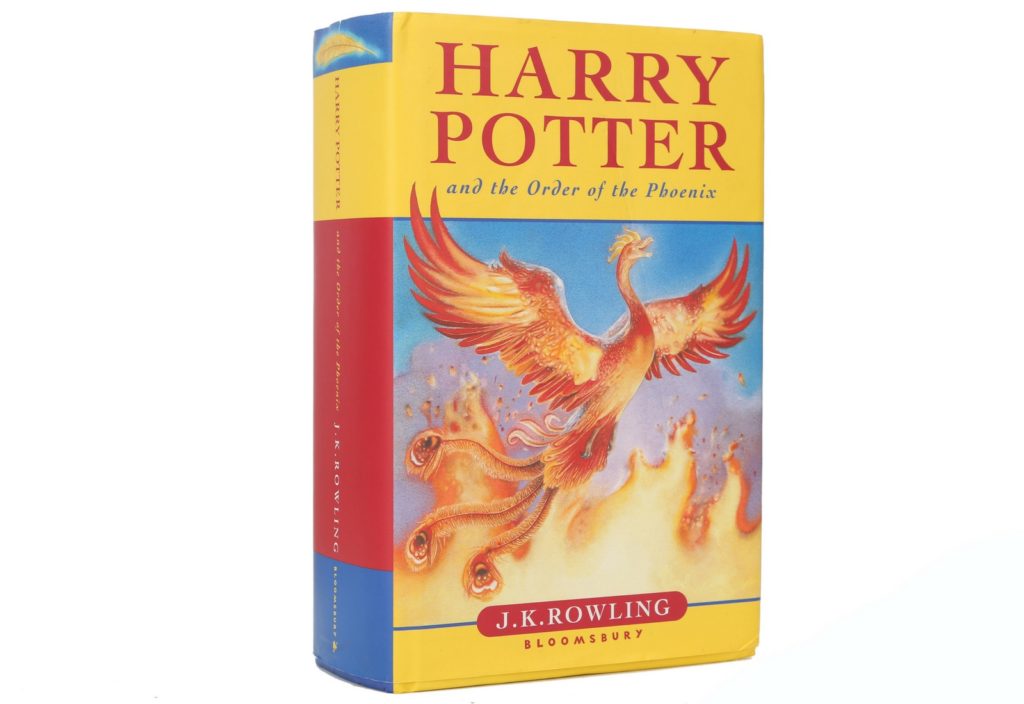 Harry Potter and the Order of the Phoenix. First Edition, signed by Daniel Radcliffe, Emma Watson and Rupert Grint on title page, with bookplate signed by J.K. Rowling affixed onto frontispiece. Estimate: £1500-2000.

We were delighted to welcome Valentina Borghi to Chiswick Auctions as Head of Autographs & Memorabilia Sales last year. Valentina previously ran the Autographs and Manuscripts sales at Bloomsbury Auctions and she holds an M.A. in Fine and Decorative Arts from Sotheby’s  Institute of Art, London and a B.A. in Modern Literature from Bologna University, Italy. Valentina’s interest in historical documents has seen her widely published in Italian art history journals.

The taste for collecting autographs and memorabilia has experienced continuous growth in recent years. This popular category covers all areas of history, music and film culture and includes a variety of collectables related to prominent figures and historic events. Ahead of the forthcoming Autographs & Memorabilia auction on 28th March, we talk to Valentina about memorable discoveries, how to spot a replica & top tips for buying at auction.

What attracted you to the world of memorabilia?

Memorabilia are by definition objects that are linked to famous people and important cultural events. Therefore, I have always been attracted to the possibility of inspecting and studying real pieces of history and uncovering their provenance. It is amazing to see the enthusiasm of collectors when they see these kind of items offered at auction.

What area of memorabilia are you particularly interested in?

I am particularly fascinated by autograph albums. They were very popular up until the 1950s and are now the reflection of a taste for signatures that no longer exists. People used these books to collect autographs by important personalities and sometimes they pasted autographed letters and photographs on the album pages.  I have been lucky enough to discover a few 19th century samples that were real gems, featuring signatures by some of the most prominent authors and politicians including Charles Dickens and Admiral Nelson. 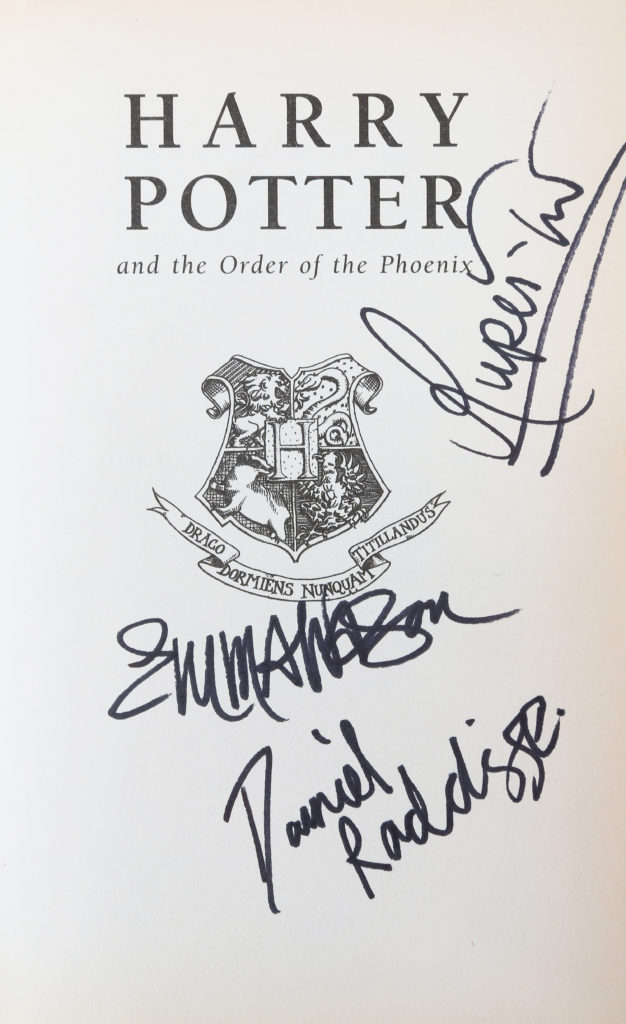 Harry Potter and the Order of the Phoenix. First Edition, signed by Daniel Radcliffe,
Emma Watson and Rupert Grint on title page, with bookplate signed by J.K. Rowling
affixed onto frontispiece. Estimate: £1500-2000.

What advice would you give to potential buyers when bidding at auction?

I always suggest that clients contact the department specialist and ask for condition reports and high- resolution images of the lot they wish to bid on. Memorabilia have survived through many decades, if not centuries, and most autographs have been signed on paper, which means they might be affected by wear, age toning and tearing.  Detailed descriptions and good quality pictures provide the client with a precise idea of the lot’s condition and help avoid disappointment. 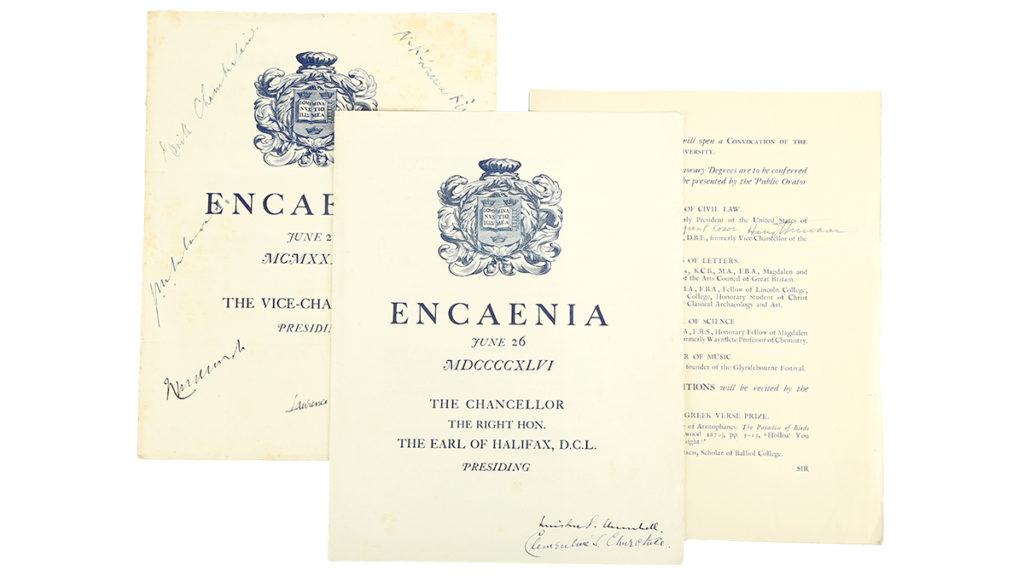 A collection of official programmes for Encaenia and other important ceremonies of the University of Oxford, signed by prominent historical figures including Winston Churchill, Neville Chamberlain, Henry Truman, Louis Mountbatten.

What top tips would you give to new collectors starting out in this genre?

I would advise them to only buy autographs from either reputable auction houses or dealers. Nowadays it is all too easy for forgers to fake autographs and sell them through the internet for very high prices. Buying from established auction houses and retailers can reassure the client on the authenticity of the item.

It is also important that new collectors do not place too much trust on certificates of authenticity (COAs).  Throughout my career, I have seen many fake memorabilia accompanied by certificates issued by people with no real knowledge of autographs. An impeccable provenance is what really makes the difference.

How easy is it to spot a replica?

It really depends on the era that the autograph belongs to. Up until the late 19th century, autographs tend to be genuine, as the means for reproducing signatures had not yet developed. This rapidly changed in the 20th century, due to cinema and illustrated magazines.  Actors and politicians quickly became popular figures and were inundated by collectors with requests for a signed photo. In order to cope with such high demand, stars relied on secretaries who used pre-printed signatures. The prevalent use of autopen made things even more sophisticated. In order to determine whether an autograph is really handwritten, we must always carry out a thorough examination. 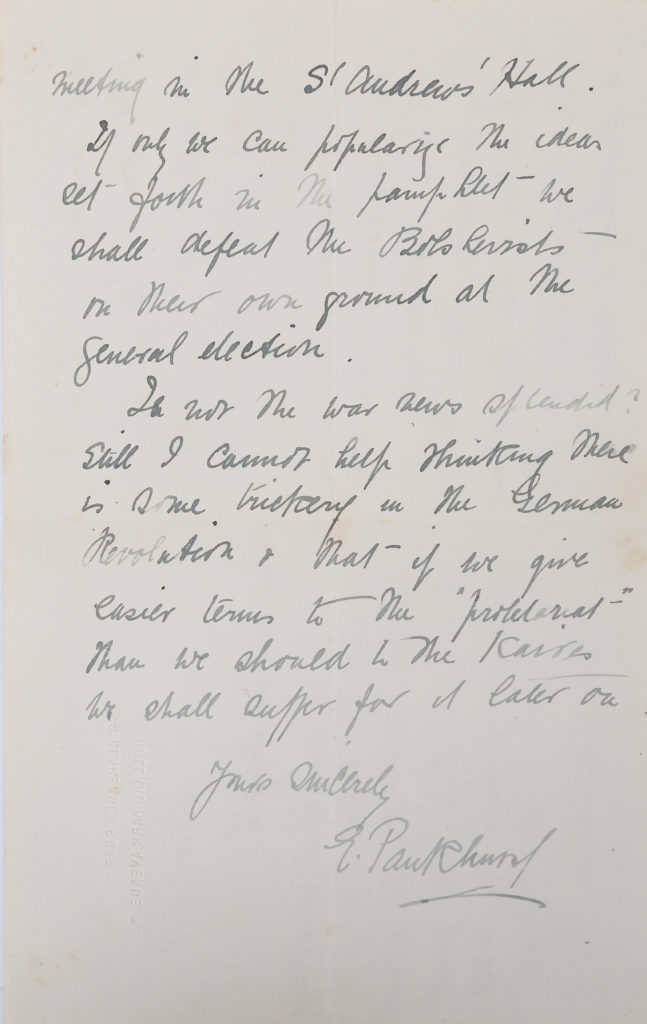 'I saw Ethel yesterday and I had the latest news of her this morning. She is much better and I hope with good nursing and feeding up will soon recover her strength. I am enclosing the little brochure of which I told you. If you think it useful, we can send you a few copies for distribution. Many progressive employers are purchasing quantities for free distribution. My daughter Christabel (the author) has just returned from Glasgow where she had a crowded and enthusiastic meeting in the St. Andrew's Hall. If only we can popularise the ideas set forth in the pamphlet, we shall defeat the Bolsheviks on their own ground at the general election. Is not the war news splendid? Still I cannot help thinking there is some trickery in the German Revolution and that, if we give easier terms to the 'proletariat' than we should to the Kaiser, we shall suffer for it later on.'

What advice would you give to collectors regarding preservation?

The most important thing is not to leave the autograph in the light, as UV rays will cause fading and discolouration. Make sure you display items in a UV protective case. A suitable option for photographs and documents is housing them in acid-free archival sleeves.