Fine Printed Books and Manuscripts including the Collection of the late Hans Fellner, and the Property of Gentleman

Our next specialist sale of Printed Books and Manuscripts will include one of the most intriguing and substantial private collections of books to appear at auction in a long time: the Collection of the late Hans Fellner (1925-96).

Hans Fellner was a remarkable man, who, for the last 20 years of his life, was a specialist in the Department of Printed Books and Manuscripts at Christie’s, renowned as much for his charm as his expertise. He was a bibliophile, a collector and a gentleman of the old school.

Christie’s South Kensington will be handling highlights from his collection in their sale of Fine Printed Books and Manuscripts on Friday 15 November: Chiswick Auctions are honoured to be entrusted with the remainder. And what a remainder it is! It covers a vast and, at first sight, bewildering, range of interests, but growing familiarity detects connections and themes: a guiding personality behind the diversity.

Hans was a man who, in his self-effacing way, took his radicalism and politics very seriously (he had to: he fled Vienna on the ‘Children’s Train’ shortly after the Anschluss), and the collection is correspondingly rich in radical writers and thinkers, particularly of the 18th-century: William Cobbett, David Hume, Leigh Hunt, Thomas Paine, Jean Jacques Rousseau, to name but a few. Female radicals of the same era are also strongly represented: Mary Wollstonecraft, Madame de Stael and the remarkable Victoria Woodhull, advocate of “free love”, a leader of the women’s suffrage movement and the first female candidate for the American Presidency.

Elsewhere, you will find philosophy, political science, history (with a particular emphasis on French, American and Irish revolutionary history), economics, agriculture, feminism, women poets, prison reform, social justice, education, Hebraica, Americana...  To attempt a précis would be to do the collection, as much its collector, a disservice, because there is so much there that is almost un-categorisable, or just unexpected: the first item I removed from the first box (and there were 150 of them delivered to Chiswick) was a splendid folding map of Kensington published by Edmund Daw in 1863.

A personal appreciation of Hans Fellner will be written especially for the catalogue by Rupert Neelands, a former colleague of his in the Book Department at Christie’s, and a friend for many years.

Another single owner property in the sale includes some remarkably grand and good-looking books. For now, one must suffice as an example. It is a Book of Common Prayer, published in London in 1700. Prayer books from the 17th and 18th-centuries are not rare, and usually fetch prices in the very low hundreds of pounds. This prayer book, however, distinguishes itself by being specially bound for a Royal Chapel by Robert Steel, one of the great English binders of the period (see illustration). Very unusually, the covers bear Queen Anne’s coat-of-arms in gilt, and her cipher is repeated several times in the compartments of the spine. In addition, the binding preserves its original silk ties with gold tassels: such things are almost invariably missing, leaving only a tantalising tab where they were once fixed. Adding to the grandeur of its royal provenance, the book bears the armorial bookplate of Hugh Cecil, Earl of Lonsdale. Bindings from the reign of Queen Anne are very rare, and ours is estimated at £3,000-5,000.

A printed catalogue for the sale will be available approximately 3 weeks prior to the sale date. It will also be viewable online at www.chiswickauctions.com and on saleroom.com. Public viewing at Chiswick Auctions takes place on Sunday 24 November from 12 noon to 6pm, on Monday 25 November and Tuesday 26 November from 10am to 6pm, and on Wednesday 27 November, from 10am to 1pm. The sale commences at 2pm. 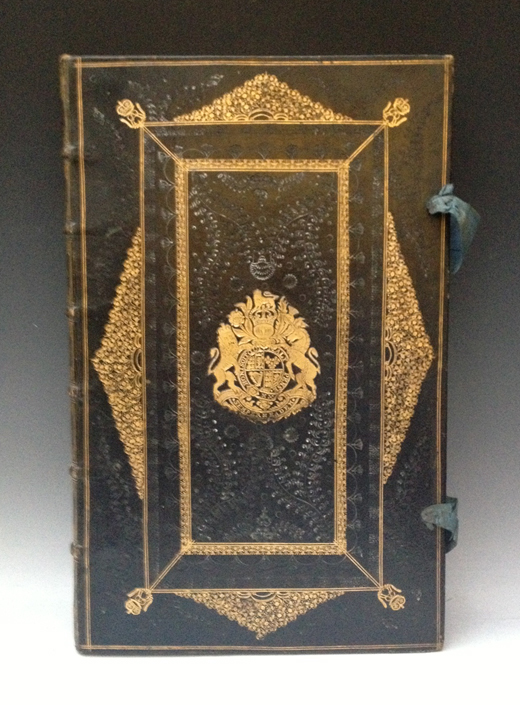