How Augustus the Strong sparked the production of Meissen porcelain

A regular fixture of our Interiors, Homes & Antiques sales, Meissen porcelain is to be treasured and admired. Mark Longley, valuer in our Interiors Department, shares the remarkable story of how European porcelain production came to be...

In the Elizabethan period, porcelains from China dating from the Wanli period(1573-1620) began to appear in England via the trading routes of what was known as the Lavant. The porcelain was held and viewed as a wonderous and precious material, and often in this period was mounted in contemporary silver. An example of such wares includes a ewer that came by descent from Burghley House, built by William Cecil, which is now in the Metropolitan Museum in New York, beautifully mounted in silver gilt.

The allure of porcelain continued to inspire and interest European minds, and scientists began to search for a material that would be similar to the Chinese porcelains they admired.

In the early 18th century, a young man and self-proclaimed alchemist called Johann Friedrich Bottger was locked up in the confines of Konigstein castle in Dresden. He was officially on the run from King Frederick I, King of Prussia, who had employed him to find the secret of turning base metals into gold, and had run into trouble in his pursuit.

His claims caught the ear of Augustus the Strong, the Elector of Saxony and King of Poland, who had Bottger confined to his castle for safety - and potentially less altruistic reasons. Like all 18th century kings, Augustus had some expensive hobbies, including maintaining a private zoo and an extensive collection of Chinese and Japanese porcelain. He was also planning to build a Japanese palace and was always in need of finance, so the allure of free gold production proved too much for him to resist.

As Bottger was not succeeding in his quest and was fearing for his life, he was probably relieved to be introduced to Ehrenfried Walter Von Tschirnhaus, a chemist and scientist, who with him conducted experiments heating earths and clays to find the origins of the Philosopher's Stone, a mythical material that could turn base elements to gold. However, the prize for their efforts was a type of material we refer to as European hard paste porcelain: a hard lustrous translucent material made from heating kaolin, feldspar and quartz, which would rival Chinese porcelain in Europe.

When it was possible to produce porcelain in quantity, a factory was started in Albrechtsburg castle in 1710 in Meissen, Saxony. Augustus the Strong was one of the first clients as he commissioned some of most extraordinary and ambitious sculpture projects made in porcelain - potentially not surpassed in modern times - a series of large figures of animals copied from his zoo which would be used in decorative schemes in his new Japanese palace.

Augustus was also a patron of theatre and the Italian Commedia dell Arte, a mixture of pantomime and farce. A series of figures were produced as table wares and were used to replace the traditionally made sugar decorations used at table, with permanent colourful figures in porcelain of Harlequin, Columbine and Pantalone.

The production of porcelain from Meissen continues today and products from the factory, from throughout its history, perform well at auction. 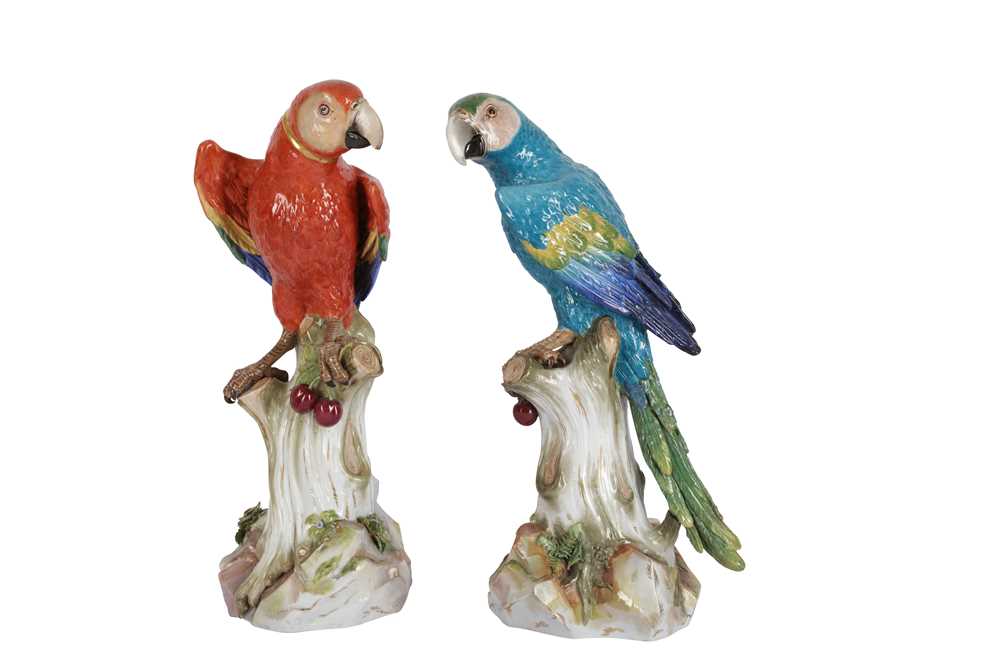 The two parrots sold for £4,500, including Buyer's Premium

In our Interiors, Homes & Antiques sale on in September, two similar Meissen porcelain models of parrots sold for £4,500, including Buyer’s Premium. The parrots were produced in the late 19th century, but were following the influences of the factories early wares produced in the 1730’s. In 1731 Meissen’s most talented sculptor Johann Joachim Kandler arrived at the factory and made realistic models of parrots in porcelain following his visits to the Saxon Courts aviaries at the hunting lodges of the palace of Moritzburg.

In previous sales at our auction rooms, we have sold a series of six Meissen porcelain plates from the 1860’s, decorated to the centres with scenes in the manner of the Old Masters for £6,250,  including Buyer’s Premium.

While Meissen porcelain can command very high values at auction, if you regularly view our sales catalogues from the Interiors department you will see that Meissen porcelains from the 17th to the 20th centuries can be bought for relatively modest values - that would make Augustus the Strong turn green with envy. 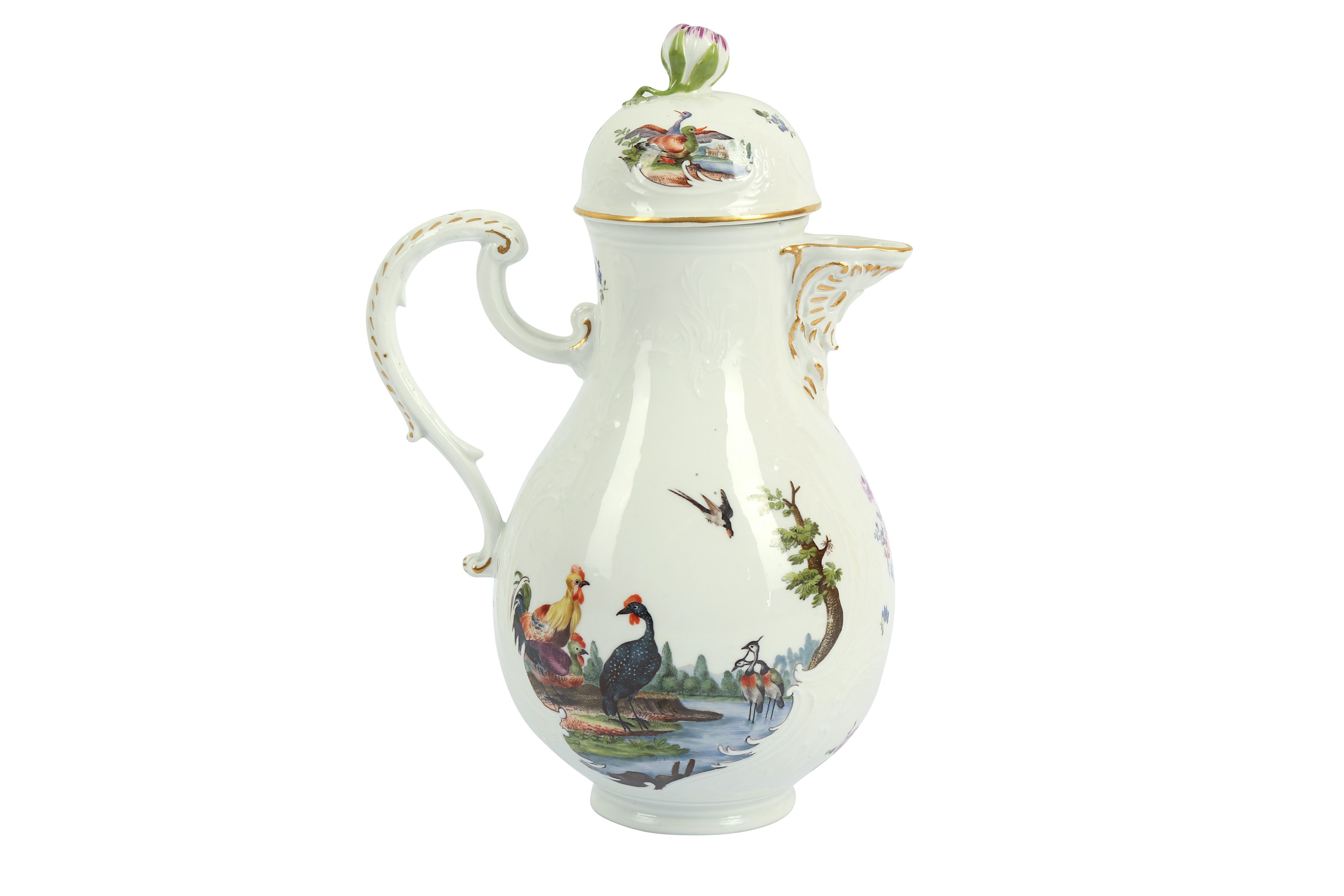 Also in our sale in September, an 18th century Meissen coffee pot and cover, overall moulded in light relief and decorated with vignettes of wild birds in landscapes sold for £500, including Buyer’s Premium. It came from a private collection purchased in the mid to late 1950's from various dealers to include Newman and Newman, Lansborough Ltd. and Delomosne and Son Ltd.

And to prove that Meissen porcelain does not have to cost a King’s ramson, a late 19th century Meissen porcelain figure of Cupid sharpening the tools of his trade, an arrow of love, on his grinding wheel sold for £225, including Buyer’s Premium.

We regularly offer porcelain in our Interiors, Homes & Antiques sales, and we are actively encouraging consignments of British and Continental porcelain, ranging from the 18th century to the Contemporary.

If you are interested in consigning, please get in touch or fill in our Online Valuation form.