We present ‘Happy and Glorious’ – our contribution towards celebrating the

Platinum Jubilee of Her Majesty the Queen.

From the restoration of Charles II onwards, we share wedding cake and Queen Victoria’s knickers, Christmas cards and photographs, the Tsar’s napkin and an Investiture chair. Here are some of our favourite picks: 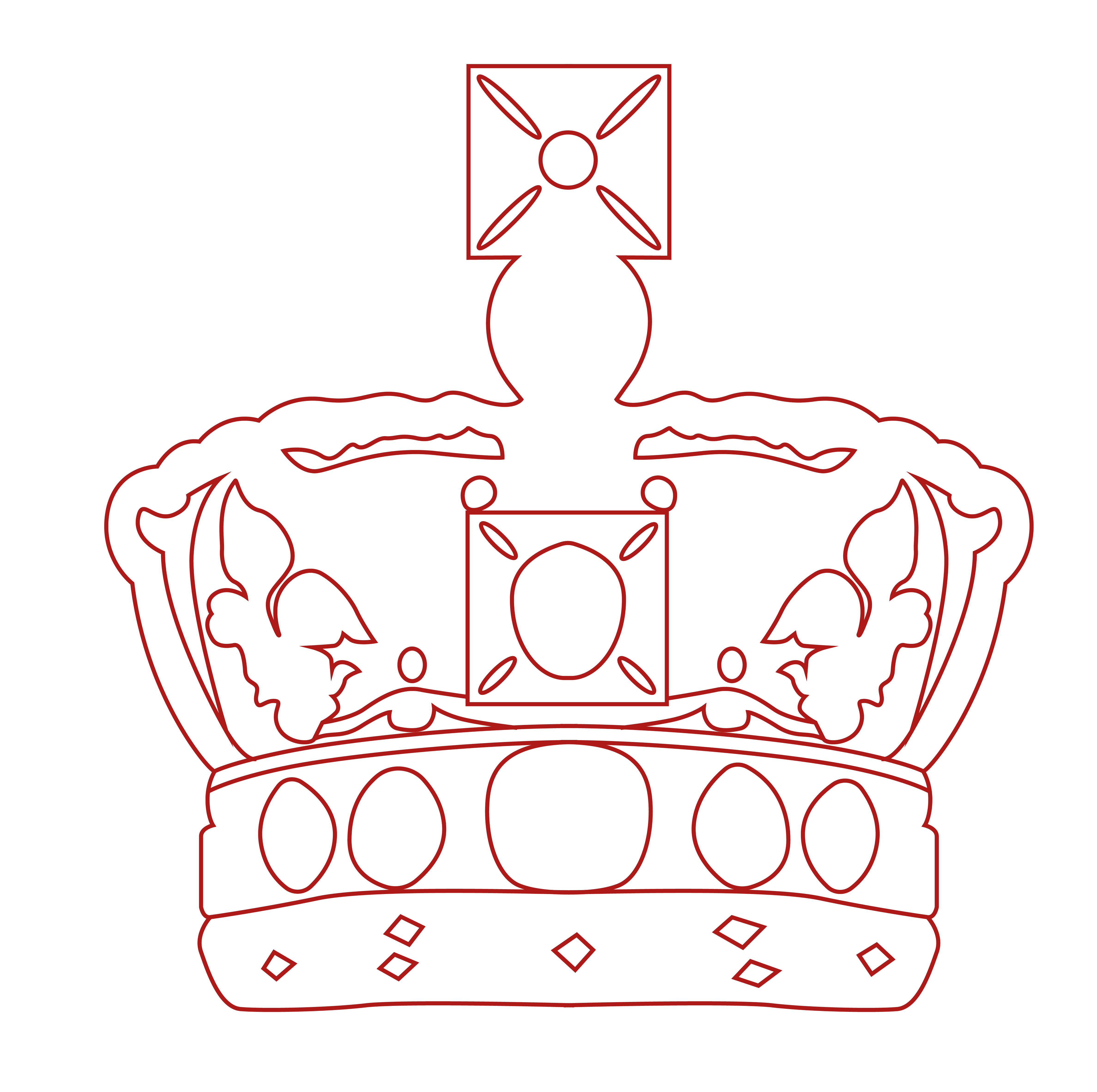 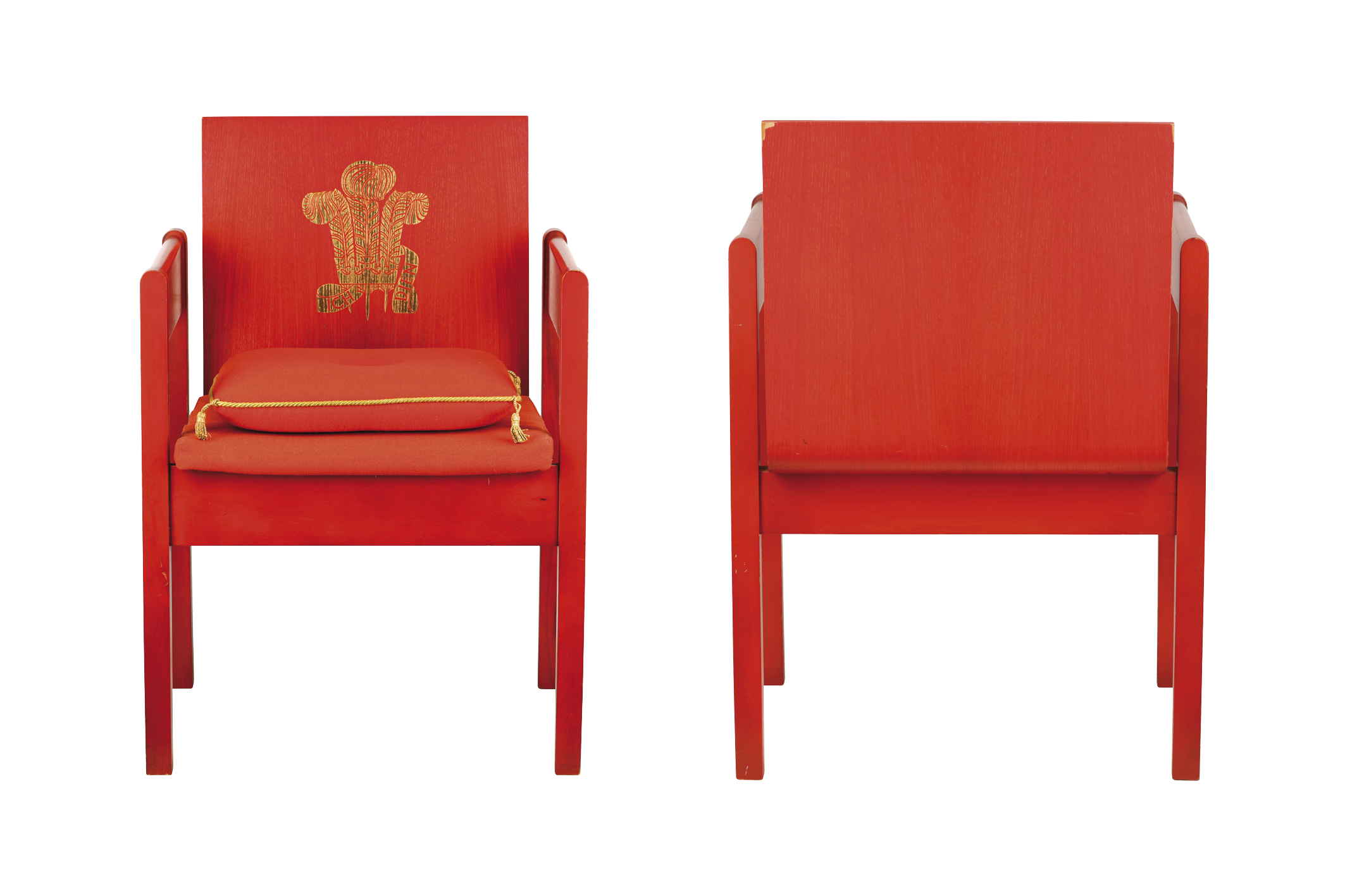 A PRINCE OF WALES INVESTITURE CHAIR

The investiture of the Prince of Wales, held among the ruins of Caernarfon Castle on 1 July 1969, was designed by Lord Snowdon, Anthony Armstrong-Jones, who was then married to Princess Margaret. The investiture was the subject of Episode 5, Season 3 of The Crown, where Prince Charles is seen learning Welsh and getting schooled in the history of the principality.

Lord Snowdon’s designs are grand, striking and lavish, and whilst being the epitome of 1960s modernism, they also reference the medieval roots of the ceremony; the Perspex canopy over the dais for example, designed to allow the BBC an unencumbered view of the ceremony, was inspired by Henry VIII’s summit with Francis I at the Field of the Cloth of Gold in 1520.

This iconic chair is from the ceremony. Designed by Snowdon with assistance from Carl Toms and John Pound, the ash laminate was stained in a striking vermilion red, with the Prince of Wales feathers stamped in gold leaf on the back. After the event, the chairs were dismantled, IKEA-style, into a flat pack, and offered to the 4,600 guests who had been sitting on them for £12 each. Lord Snowdon himself bought six for his own collection. This chair is offered with its original tweed cushions and is in excellent condition. The sale also features a stool from the coronation of the Prince of Wales’s Grandfather, George VI, in 1937. 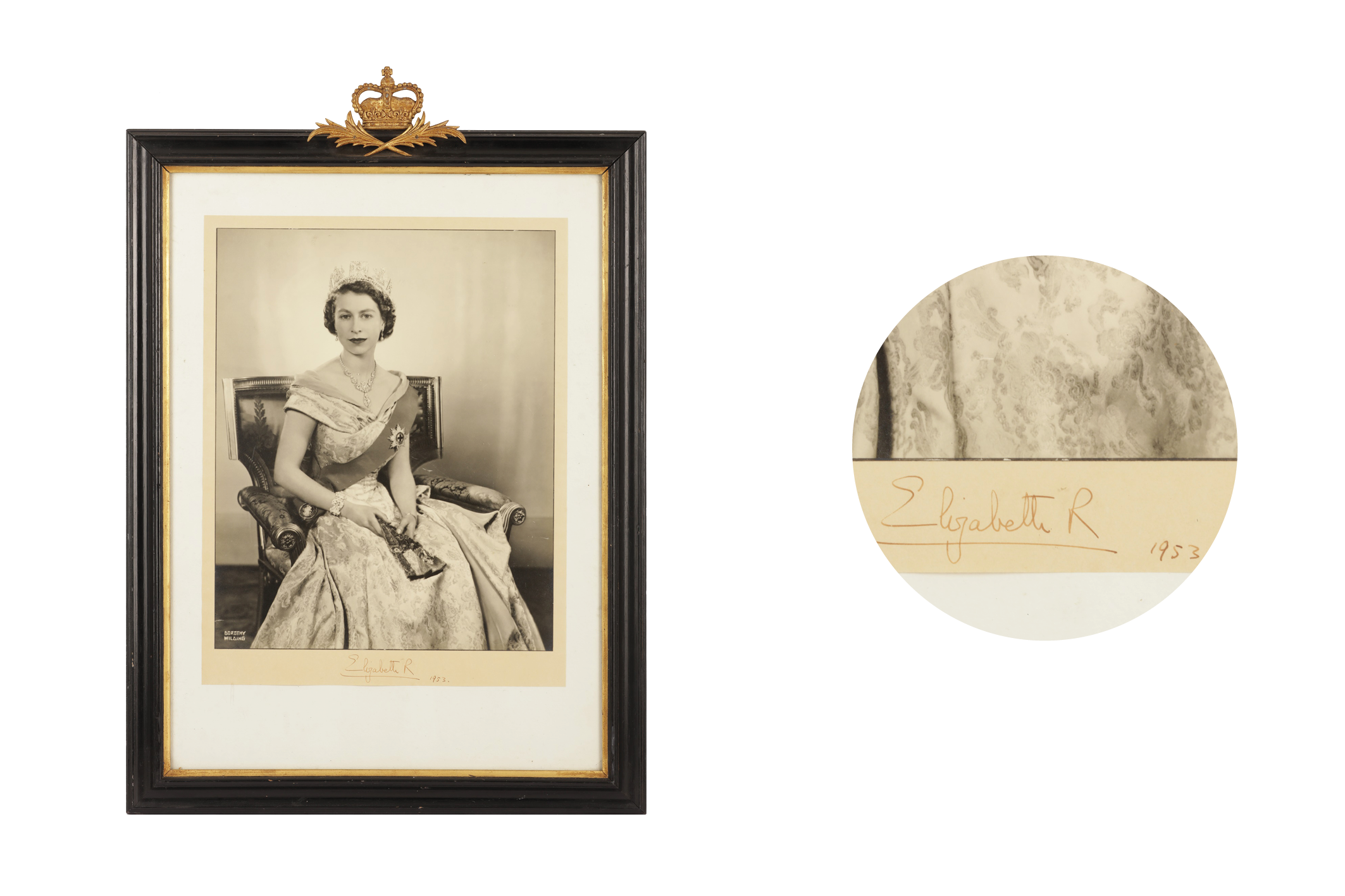 The moment this exceptional portrait of Her Majesty the Queen came into our auction rooms, we knew it was the star lot of ‘Happy and Glorious’. Affixed to its original studio mount, signed by Her Majesty, and framed, this defining image was taken by Dorothy Wilding, the celebrated society photographer who had studios in London and New York. She was the first woman to be appointed the Official Royal Photographer for the 1937 Coronation, a photograph of which we also offer in our sale.

This portrait is part of a collection of 59 photographs taken by Wilding just 20 days after Elizabeth became Queen, on 26 February 1952. The commission, which included the Queen in different gowns and jewellery, was designed to provide images to be used on postage stamps and banknotes, as well as the official portraits for the walls of British embassies overseas.

The Queen wears the Diamond Diadem, made for the coronation of George IV in 1820, worn by the Queen to her own Coronation, and regularly since then for the State Opening of Parliament. The Diadem features in many portraits, sculptures, stamps, and banknotes from across the family of Commonwealth nations. Around her neck is the Nizam of Hyderabad diamond necklace, made by Cartier in 1935 and a wedding gift from the Nizam in 1947. It remains one of the Queen’s most precious gifts, given its association with Prince Phillip. Readers will recognise that the Queen has frequently loaned this stunning piece to Catherine, Duchess of Cambridge. It is thought to be the most expensive piece of jewellery in the private collection of any royal family in the world and is estimated at £66.2m.

This portrait is part of a number of portraits featured in the sale, including those of George VI and the Prince of Wales. 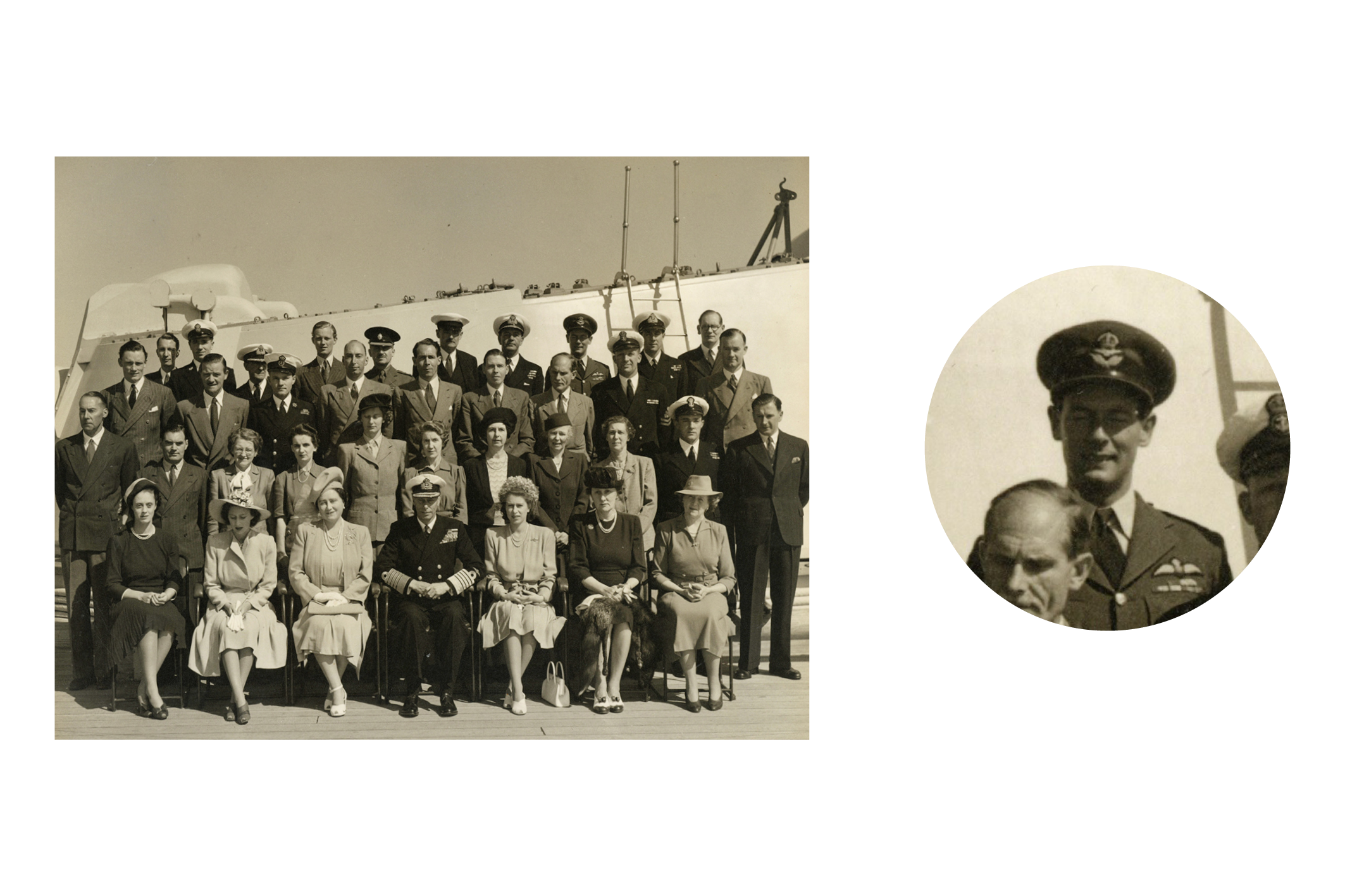 The 1947 Royal Tour of South Africa was a landmark tour for many reasons. The first tour since the end of World War II, it also marked the first time that Princesses Elizabeth and Margaret had been abroad, and Elizabeth’s first solo public engagement. It was on this trip that she celebrated her 21st birthday and famously made her radio broadcast dedicating her life to the service of the Commonwealth and its people. The Queen has renewed this dedication at several points since her Coronation, including at every Jubilee.

Departing a country gripped by one of the harshest and snowiest winters on record, the Royal Family boarded HMS Vanguard – the largest, newest and fastest battlecruiser in the Royal Navy – and departed for Cape Town for a three-month, 10,000 mile tour that would take them through Southern Africa and Rhodesia, meeting and greeting thousands of people, hosting numerous garden parties, opening parliaments, and visiting game reserves, diamond mines and wineries. The South African Prime Minister, Jan Smuts, hoped the visit would bolster his chances in the 1948 election. Unfortunately, this backfired: what was seen as his close association with ‘British imperialists’ ushered the nationalists to victory and their heinous policy of apartheid.

HMS Vanguard carried a staff complement of 1,975 men, along with the Royal Family and some of the Royal Household, shown here in this photograph taken on board the ship. Wonderful footage can be found on YouTube of the princesses playing games with the sailors, and of the traditional ceremonies and fancy dress that those who had never crossed the equator have to endure (the princesses were treated kindlier, having their faces lathered up but not having to undergo the dunking in cold water).

We also offer a collection of 13 photographs featuring the specially commissioned ‘white train’, described at the time as a ‘Palace on Wheels’, which took the Royal Family across the region. Princess Elizabeth was allowed to phone Phillip, back in London, using a telephone installed in the King’s cabin. Following the first night’s huge meal, the Queen asked for the menus that covered their 35 days on the train in advance, and crossed off many of the more elaborate, rich dishes. The train would frequently stop at rural crossings in the Southern African veld, where hundreds of local people would gather to greet the Royal Family..

After six years of the Second World War, this trip must have been such a wonderful adventure. Perhaps it was the last time that ‘Us Four’ truly enjoyed themselves as a family. For Elizabeth was already privately (secretly) engaged to Phillip Mountbatten; the King insisted that the announcement wait until they returned from the tour and Elizabeth had turned 21. As for Margaret…well, eagle-eyed observers will spot someone in the back row of the photograph of the royal household on HMS Vanguard. Resplendent in his RAF uniform is one Group Captain Peter Townsend. 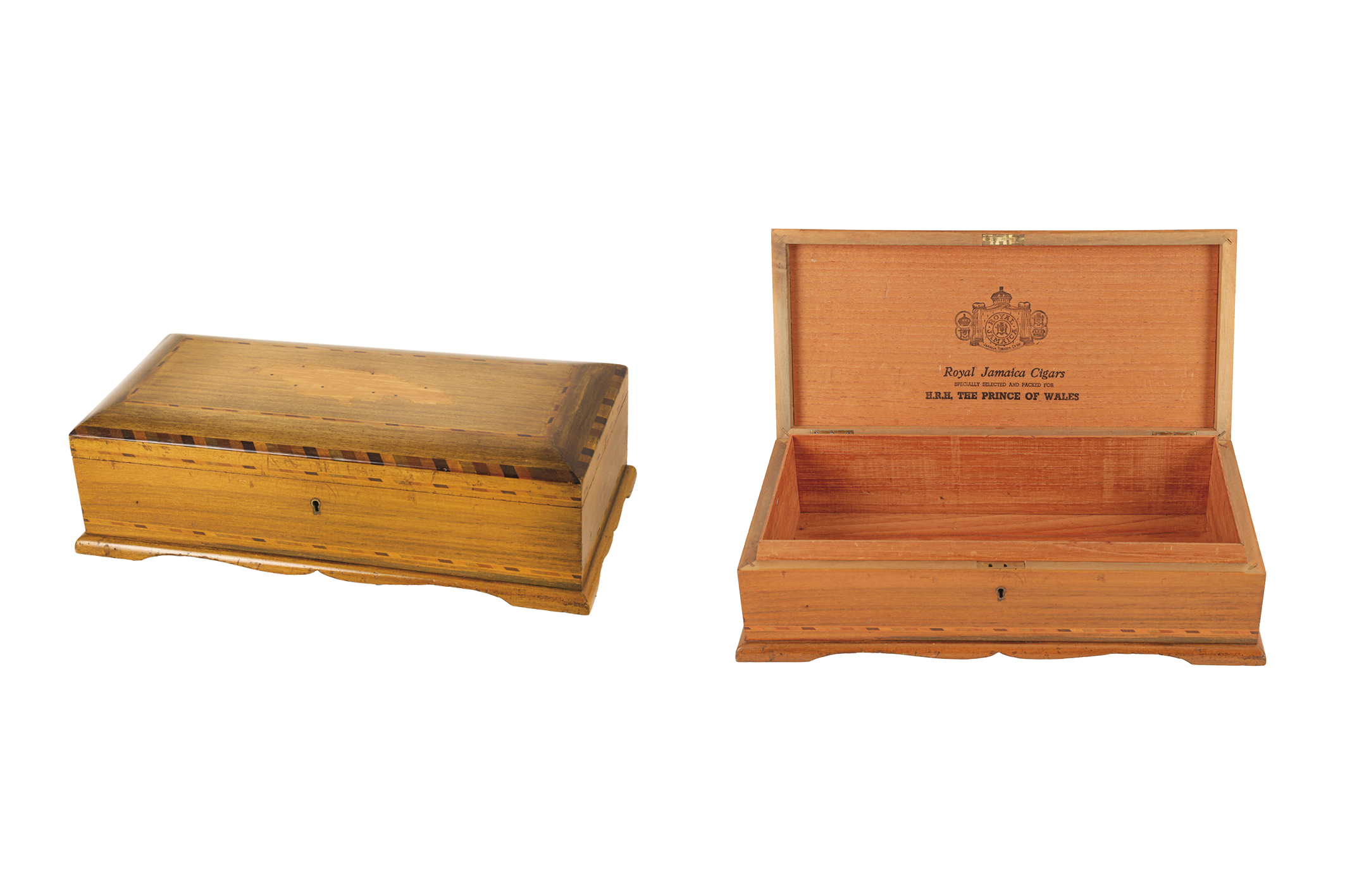 Edward VIII’s abdication in December 1936 changed everything for Princess Elizabeth. Anything related to the Duke and Duchess of Windsor is always a popular part of our regular Autographs and Memorabilia sales, and we feature several items in ‘Happy and Glorious’ including the abdication speech printed on a scarf. Here, we’re highlighting a cigar box, custom-made by the Royal Jamaica Cigar Company for Edward when he was Prince of Wales. On the inside of the lid, the box is stamped ‘specially selected and packed for HRH Prince of Wales’, with a map of Jamaica on the top of the lid. Potentially, the humidor was made for his planned visit to Jamaica in 1920, a visit that had to be cancelled at the last-minute owing to the large number of chicken pox cases on the island.

Zadok the Priest and Nathan the Prophet, anointed Solomon King 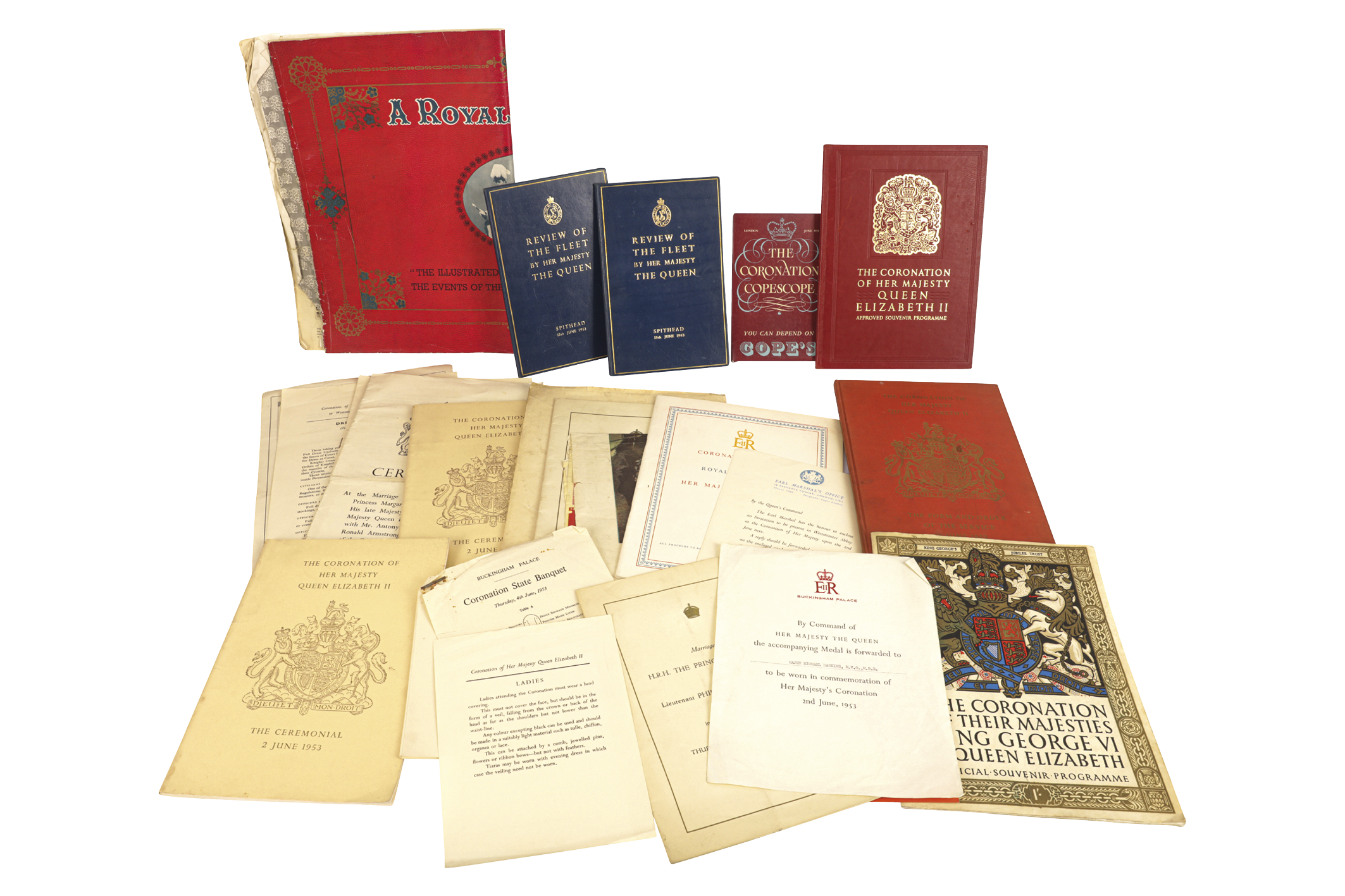 A COLLECTION OF EPHEMERA AND BOOKLETS RELATED TO THE 1953 CORONATION

One of our lots is a huge collection of ephemera and booklets relating to the Coronation of June 1953. Tickets to the Coronation, which look like they were printed yesterday and not 70 years ago, programmes, the order of service, seating plans, booklets. My mother recalls people in the Lancashire village in which she lived coming to their home to crowd around their television set to watch the proceedings; this was the first Coronation to be televised. What an incredible event it must have been. The Duke of Edinburgh played a leading role in modernising the event, which otherwise would have been a re-run of 1937. Interestingly, we now hear snippets from Clarence House of how the next coronation will be different still, refined for the tastes and shorter attention spans of the 21st century.