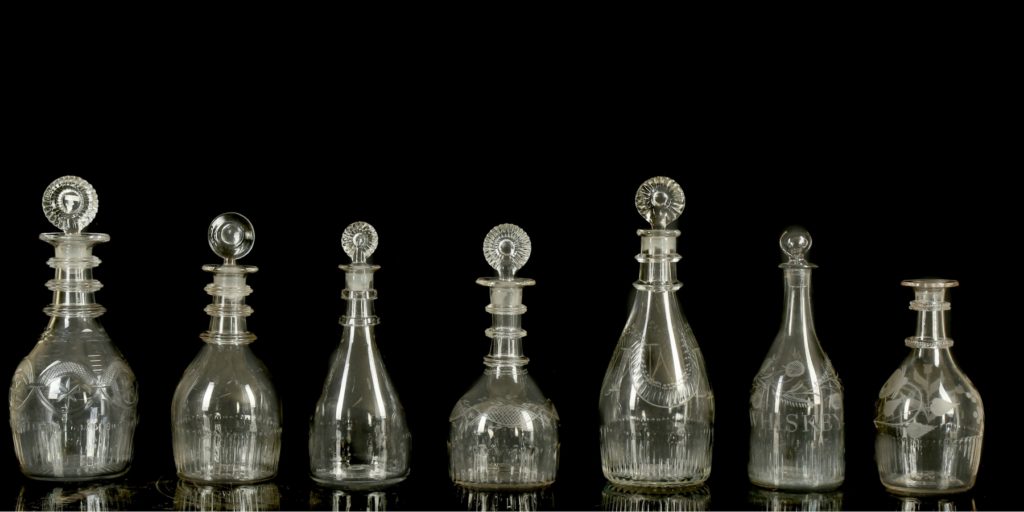 Ahead of the Ceramics & Glass auction on 24 October, Head of Department Dr. Jim Peake takes a closer look at a broad range of glasses, water jugs and decanters offered in the sale that pay tribute to the Irish cut-glass industry.

Lead Crystal as we know it today only became possible after the discovery of lead glass in the late 17th century. Traditionally its discovery has been attributed to George Ravenscroft, who ran a glassworks in Soho, although recent research now suggests that it is far more likely to have first been developed on the Continent.

'This glass had great clarity and strength, which allowed it to be blown, worked and cut in such a way that was impossible with earlier glass recipes. The result was some of the most beautiful and coveted glass in the world.' - Dr. Jim Peake

George Ravenscroft was one of the first glassmakers to produce lead glass, then known as ‘flint glass’, on a large scale. It went on to be produced in huge amounts throughout the 18th century. Drinking glasses were produced in a huge variety of shapes and sizes, reflecting the rise in consumerism. Different styles and shapes of glass were produced for particular drinks, including wines, ales, and cordials, or for particular occasions, including, toasting, banquets and large goblets for ceremonies.  So-called ‘heavy baluster’ glasses and goblets were particularly popular from 1690. Plain stemmed glasses, often enclosing a single bubble or tear and typically with a folded foot to prevent chipping, were also popular. This tear was later manipulated to produce elaborate ‘air twists’, which subsequently led to the development of ‘opaque twist’ and ‘colour twist’ stems. 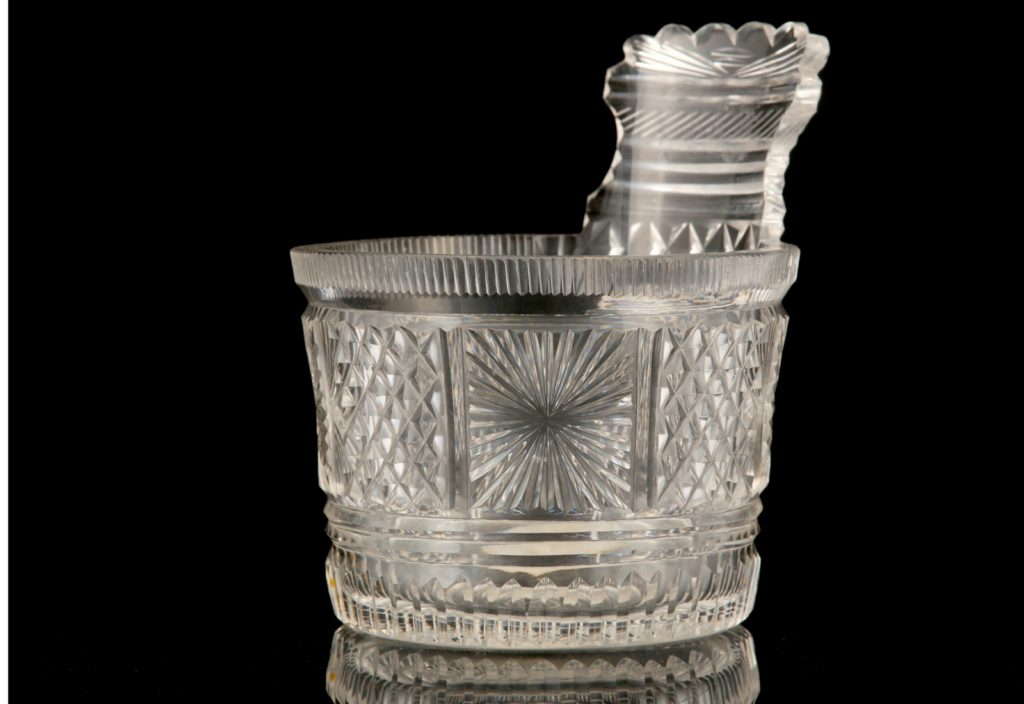 A rare Irish cut glass piggin, circa 1820. Estimate: £80 - £120. Piggins are pail-shaped vessels traditionally made in wood and used as ladles or for drinking. Glass versions are thought to have been used for cream, butter or saucers on the dining table.

The international success of lead glass led the British government to impose a tax on glass by weight in 1746. Glassmakers initially took steps to reduce the weight of their products, phasing out the folded foot and producing glasses with hollow stems. By the late 18th century, a growing middle-class population led to an increased demand for high-quality glassware. The debilitating excise duties placed on glass from 1777 in Great Britain meant that supply of English glass was low, and this gave rise to new economic opportunities in Ireland where, from 1780, glass was not subject to these taxes.

The Irish cut-glass industry was born. A number of factories were established, predominantly on the east coast near ports which provided a ready supply of coal, as the use of wood in glassmaking was banned by English legislation. In 1793 two brothers, George and William Penrose, founded the Waterford Crystal manufactory in Waterford. A selection of glassware offered in the sale are marked with the Waterloo Glass Co. and Penrose, Waterford. Glasshouses also sprang up in Cork, Belfast, Dublin and Newry. Essentially the products of an elaborate tax-dodge, these glasshouses employed English glassmakers mostly from Worcestershire, who trained Irish apprentices in the craft.

Aside from being strong and durable, the now internationally famous Waterford pieces were renowned for their distinctive grey colour and deep-cut patterns which gave them a particularly beautiful brilliance.

'By the early 19th century, these pieces were adorning the parlours and dining rooms of the rich and famous across England and America.' - Dr. Jim Peake

Sadly the success of the Irish glass industry was relatively short-lived. It was hit first by The Irish Excise Act in 1825, which restricted the export of Irish products, and then by the great famine of the 1840’s which led to the mass emigration of these skilled glassworkers.

'Although the Waterford factory enjoyed a revival in the 20th Century, it is the early pieces that are the most sought after.' - Dr. Jim Peake