French fashion is renowned for its timeless, classic designs and no fashion house epitomises this more than Paris-based luxury brand Hermes.

The Kelly bag was originally designed by Robert Dumas in the 1930s as a 'sac a courroie pour dames', meaning 'bags with a strap for ladies.' It was later renamed after the glamourous American actress and Monegasque princess Grace Kelly in 1956 when photographs of her using the bag to shield her pregnancy bump from paparazzi bulbs became an overnight sensation.

The forthcoming auction offers seven different types of Hermes Kelly bags, encompassing an impressive range of varieties including the vintage Sellier and Retourne’s, to black crocodile leather styles, a ‘mini’ and ’shoulder’ Kelly.

There are two classic Kelly styles, the hardsided ‘Sellier’, boxy and structured appearance and the soft sided ‘Retourne’ that has a softer, more rounded look. Lot 184 is a brown leather example of the latter design.

Lot 31 and Lot 86 are vintage versions of these two designs in box calf leather and the Sellier resembles the bag used by Grace Kelly.

‘Lot 84 is particularly rare as Hermes made the mini for just a few years and then rested the model for 40 years, only recently designing a modern version. Lot 84 dates from 1975 and is in very good condition considering its age’

Two black crocodile leather Kellys are offered in the auction, one vintage and the other dated to 1998. (Lot 119.) This piece has a chic matching Bearn wallet (Lot 118) that makes a stylish companion.

This ‘shoulder’ Kelly (Lot 258) is adapted to have a longer handle than the classic design, which makes it a fantastic option when on the go.

The iconic Birkin bag was created in 1984 by Chief Executive Jean Louis Dumas and is named after actress and singer Jane Birkin. It is believed that Birkin was sat next to Jean-Louis Dumas on a flight from Paris to London. After she placed her infamous straw bag in the overhead compartment, the contents including her Hermes diary are said to have fallen out. Birkin confessed to Dumas that she had been unable to find a leather weekend bag that she liked and thus Dumas decided to design a black leather bag specially for her. Using Birkin as inspiration, Dumas transformed the original ‘Haut a Courroies’ bag used for equestrian kit into a more spacious, versatile and contemporary bag. 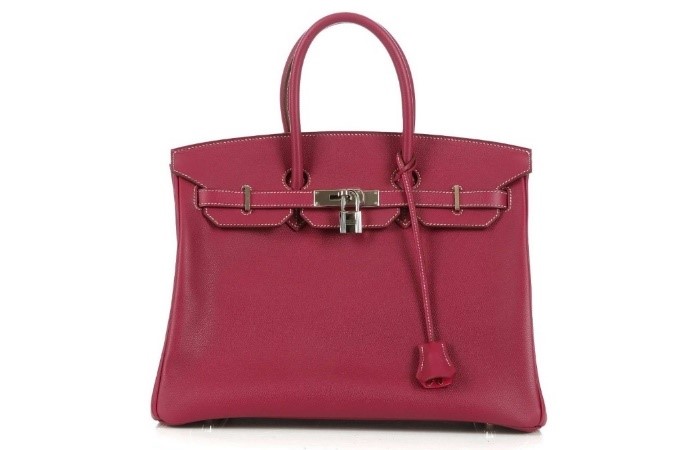 Lot 115 is a Rare Hermes Tosca pink Birkin, with Tyrian pink lining. It is decidedly noteworthy because it is an apprentice piece gifted to a Hermes staff member as a leaving gift.

As a form of debut, the apprentice piece is of the same quality as a standard Birkin, but is special as it comes with discreet markings under the flap and beneath the ‘Hermes Paris made in France’ heat stamp where the apprentice has embossed the bag with a subtle serial code that is hardly visible, a type of maker’s mark as it were. In this instance, the code reads 27433 and the initials H.D, which indicates who the piece belonged to. Furthermore, the contrasting colour of the exterior and lining departs from the standard design and makes it particularly unique.

From rare Hermes Kelly and Birkins, to sought-after Louis Vuitton and Chanel handbags, as well as unique outfits and accessories by Vivienne Westwood and Christian Louboutin, don’t miss the Designer Handbags and Fashion auction on 23 May.

View lots in the forthcoming auction