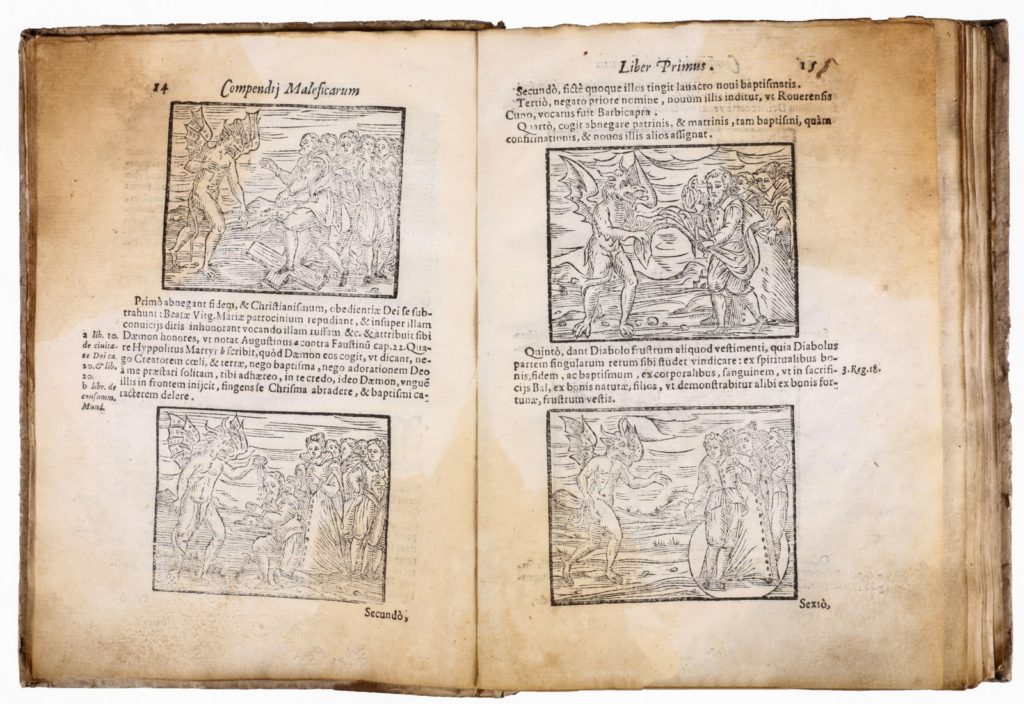 In the spirit of Halloween, we brave a look at four texts offered in the dedicated auction of Books from the Library of Giancarlo Beltrame including Science, the Occult and Curiosa taking place on 14 December.

Giancarlo Beltrame (1925-2011) was an avid collector of scientific books and prints and was captivated by the enduring themes of Love and Death. His house in Vicenza was brimming with depictions of nudes and skeletons, skulls and bones, monsters, dragons, martyrs and witches. His collection provides a captivating survey of memento mori, Vanitas images, Dances of Death and prints from the 15th to the 20th century.

A remarkably rare first edition of Compendium maleficarum (c. 1608) by Ambrosian Friar Francesco Maria Guazzo (1570-1640), illustrated above, was originally written at the request of Cardinal Federico Borromeo, the Archbishop of Milan.

‘The text was considered as the authoritative manuscript on Witchcraft by Guazzo’s contemporaries. Renowned for its fine woodcut illustrations, it became a celebrated ‘hand-book’ on witchcraft, exorcism and demons.’ - Nicholas Worskett, Consultant in Special Collections

Guazzo was widely travelled and held in high esteem in the field of possessions, demonology and finding cures for such diagnoses. It was the friar’s firsthand experience in the profession of witchcraft and practice of exorcisms that inspired him to write the Compendium maleficarum. The text discusses witches’ pacts with the devil, their powers and poisons and laid out his classification of the demons based on a previous work by Michael Psellus.

Guazzo was heavily influenced by Duke Charles III of Lorraine’s leading lawyer and demonologist, Nicholas Remy, who produced one of the most influential early works on demonology in 1595, titled Daemonolatreiae libri tres. Remy claimed to have sentenced to death over 900 people during witch trials between 1582–1592. 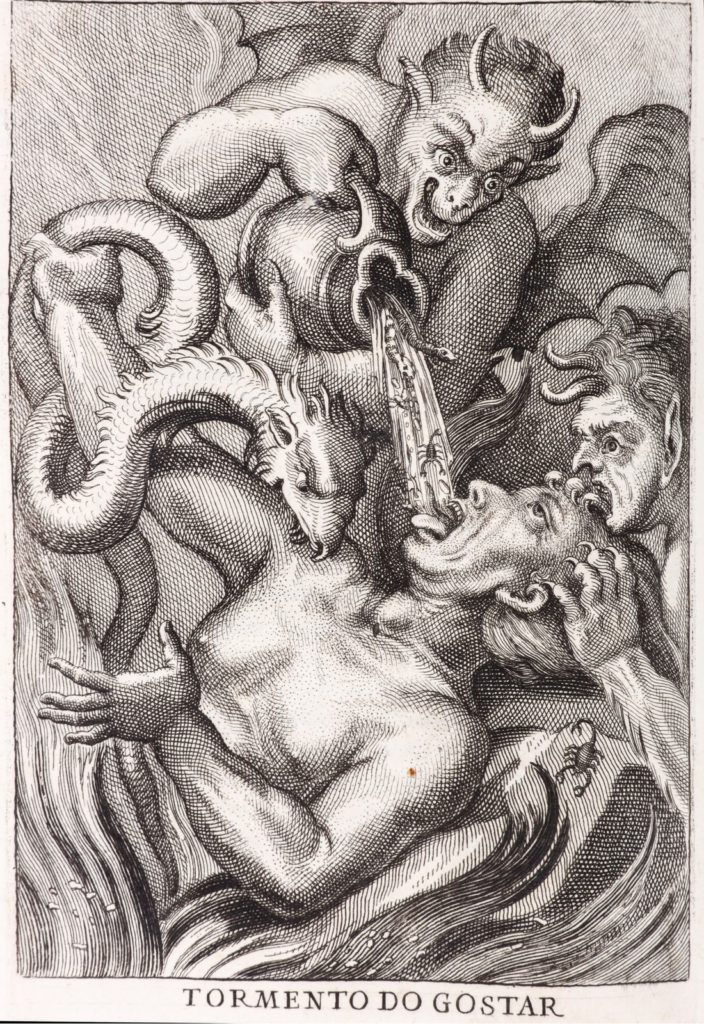 An Italian translation of Disinganno de’ Peccatori Necessario ad ogni genere di Persons by Alessandro Perier (1651 – 1730) is offered in the sale, with an additional engraved title depicting the mouth of hell.

‘Fourteen engraved plates graphically depict the physical torments of hell and owe more to the medieval imagination than the Age of Reason.’ - Nicholas Worskett, Consultant in Special Collections

The work, originally written in Portuguese, also includes Perier’s descriptions of earthquakes in Chile and Peru, witnessed during his time as a missionary in Brazil.

A selection of additional sale highlights: 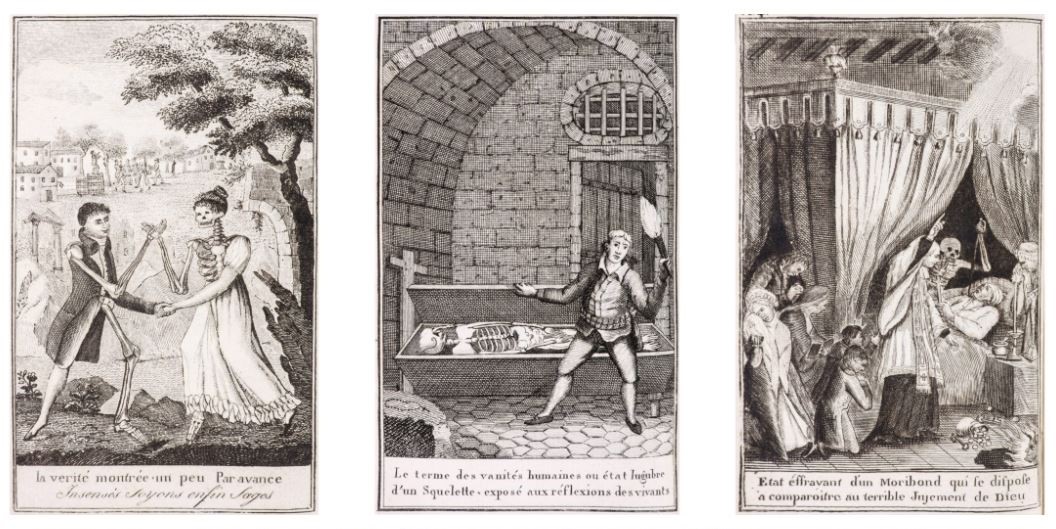 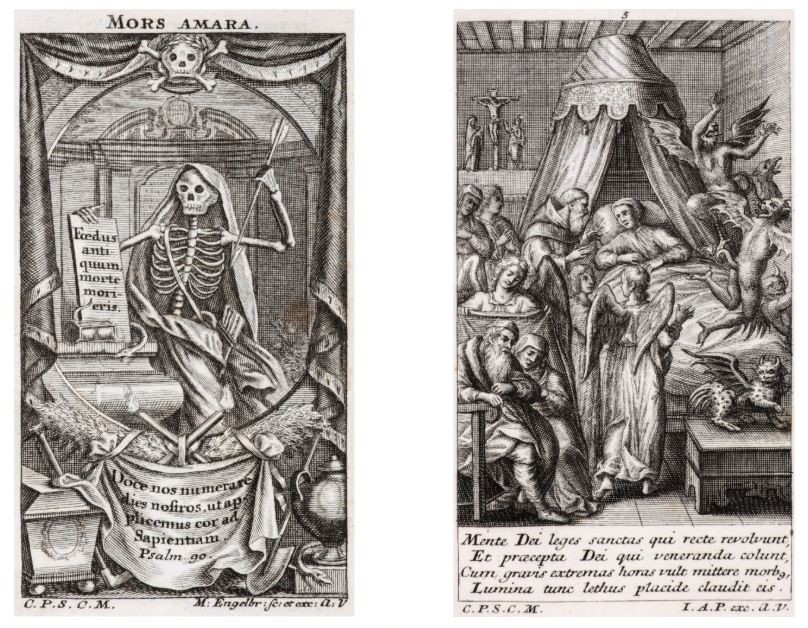