Ahead of the Japanese Art sale on 12th November, which features a number of pieces from 16th  and 17th century in the unique style called Namban Art, specialist Yasuko Kido delves into the history of this interesting period and explores the influences of European fashions in Japan.

In the mid 16th Century, Portuguese traders and Jesuits missionaries started to come to Japan, they were called Nambanjin (Southern Barbarians) as they came from the south. They introduced handguns along with Christian teaching.

Japan was in a civil war at the time, the emperor had lost power and the feudal lords were fighting against each other to expand their territories. In order to ensure missionary work went smoothly, Jesuits had to engage themselves in trade with powerful samurai lords. Many lords converted to Christianity in order to gain access to guns and profit from trade.

Portuguese ships were also of interest to the Japanese and were frequently depicted in Japanese paintings and screens during this period and in the design of powder horns, food caskets, writing boxes and sword guards, like the example below. 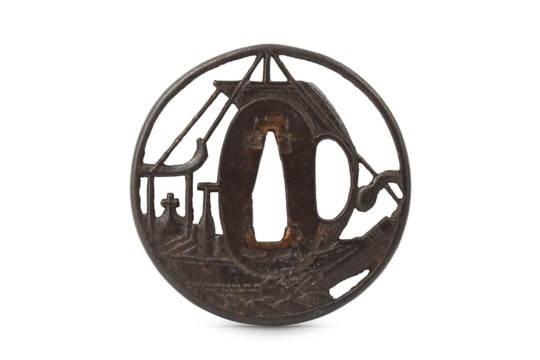 For more information on the any of the pieces from the upcoming sale, contact Specialist of Japanese Art, Yasuko Kido.