In the history of Western publishing, cookbooks have produced more bestsellers that any other genre. Book Specialist, Dr Carmen Donia looks at the history of the cookbook during the Renaissance and two items offered in the forthcoming Rare Books & Works on Paper sale: a rare copy of an early German book on wine and an extract from one of the most popular cookbooks ever printed.

“The destiny of nations depends on their diet”.  - Brillat Savarin

With the invention of printing; cookbooks, along with Bibles, were the earliest mass-produced books. From the period between 1475 to 1620 about 220 printed cookbooks (about 1/3 German, 1/5 Italian) are known. The growing economic prosperity of the times enabled culinary and gastronomic refinement in some areas, especially Italian cities, such as Venice, Genoa or Florence, eventually reaching German-speaking areas such as Tyrol or Augsburg. The economic power of these areas in the 16th century was contributed to the Fuggers, one of the greatest trading families, dealing with spices and other Arab products (anise, spices, dates, pomegranates, bitter oranges, etc.). It was during this period when the first traditional recipe for risotto appears, together with noodles and marzipan, these dishes were considered among the earliest achievements of Renaissance cooking.

The first cookbooks tended to be technical volumes with no decorations or illustrations, although, around the 15th century, woodcuts and engravings were used as frontispieces, mostly showing kitchen scenes and utensils. As cookery books became more elaborate, so did their illustrations.

Analysing the form and function of cookbooks in the early modern age has provided illumination on  the Renaissance approach to food and drink. These works provide an almost encyclopedic breadth of information on aspects such as food preparation and service, furnishing the kitchen, recipes, care of the sick, carving and serving, and general stewardship, including provisioning and menu planning.

In the current rare books market, there has been a growing curiosity for wine books, as well as an increase in prices over the last few decades, mirroring the explosion of interest in food and wine in our wider culture. 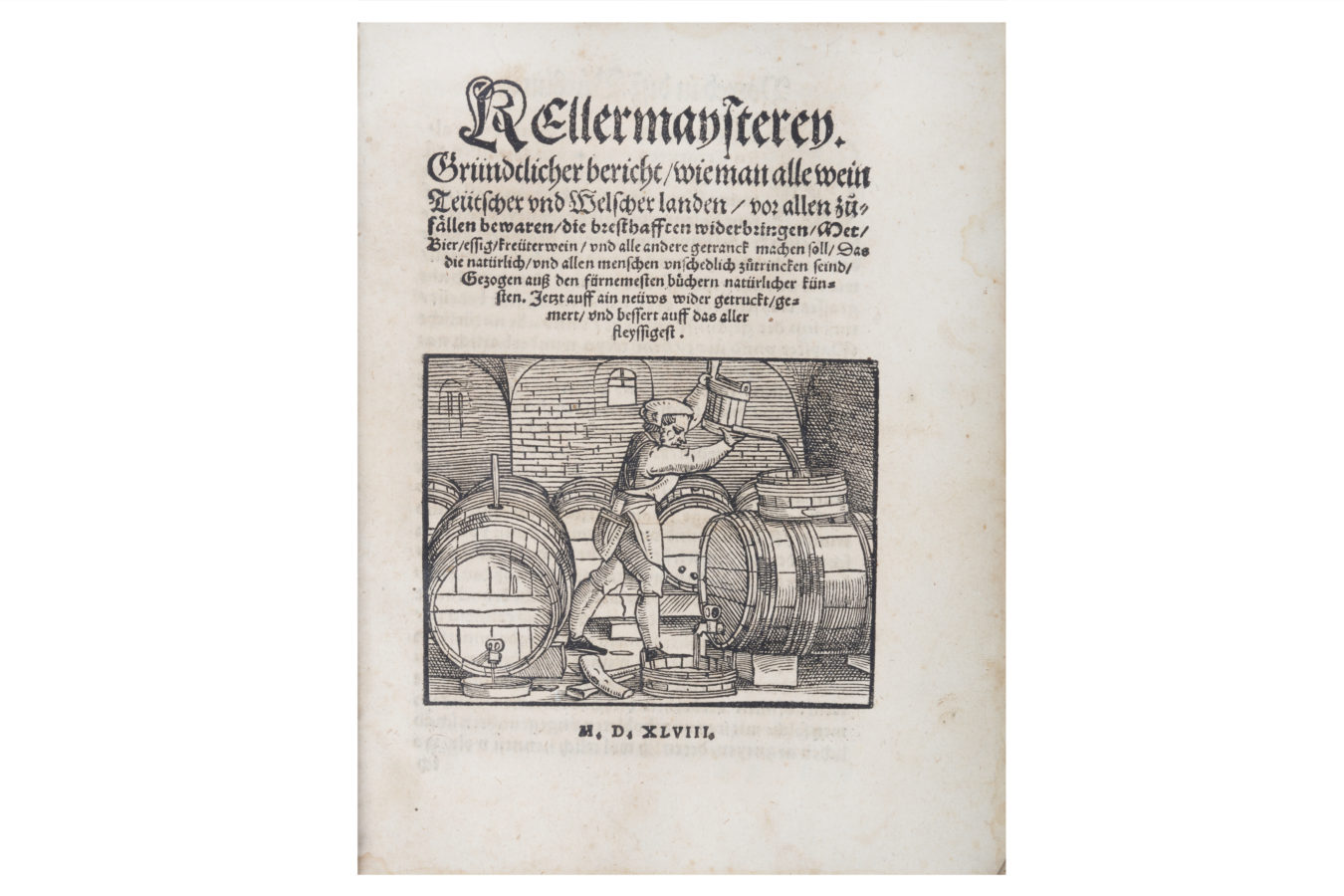 Early printed books on wine making, or on the culture surrounding wine, are very rare. The oldest wine books in Europe date to the late 16th century. These books cover a variety of subjects such as how to grow and make wine, restore wine from off states, and how to simply enjoy it.

Among the earliest books on wine and food are ‘De honesta voluptate et valetudine’, written between 1465 and 1466 by the Italian humanist Bartolomeo Plantina, the first printed cookbook from the late 15th century; the 1514 First Aldine Edition of ‘Libri de re rustica’ (Book of Country Affairs), including works by Columella, Cato, Varro and Palladius, as well as Paulo Mini’s ‘Discorso della natura del vino’ (1596), one of earliest books on wine, analysing tasting notes from different regions around Italy. 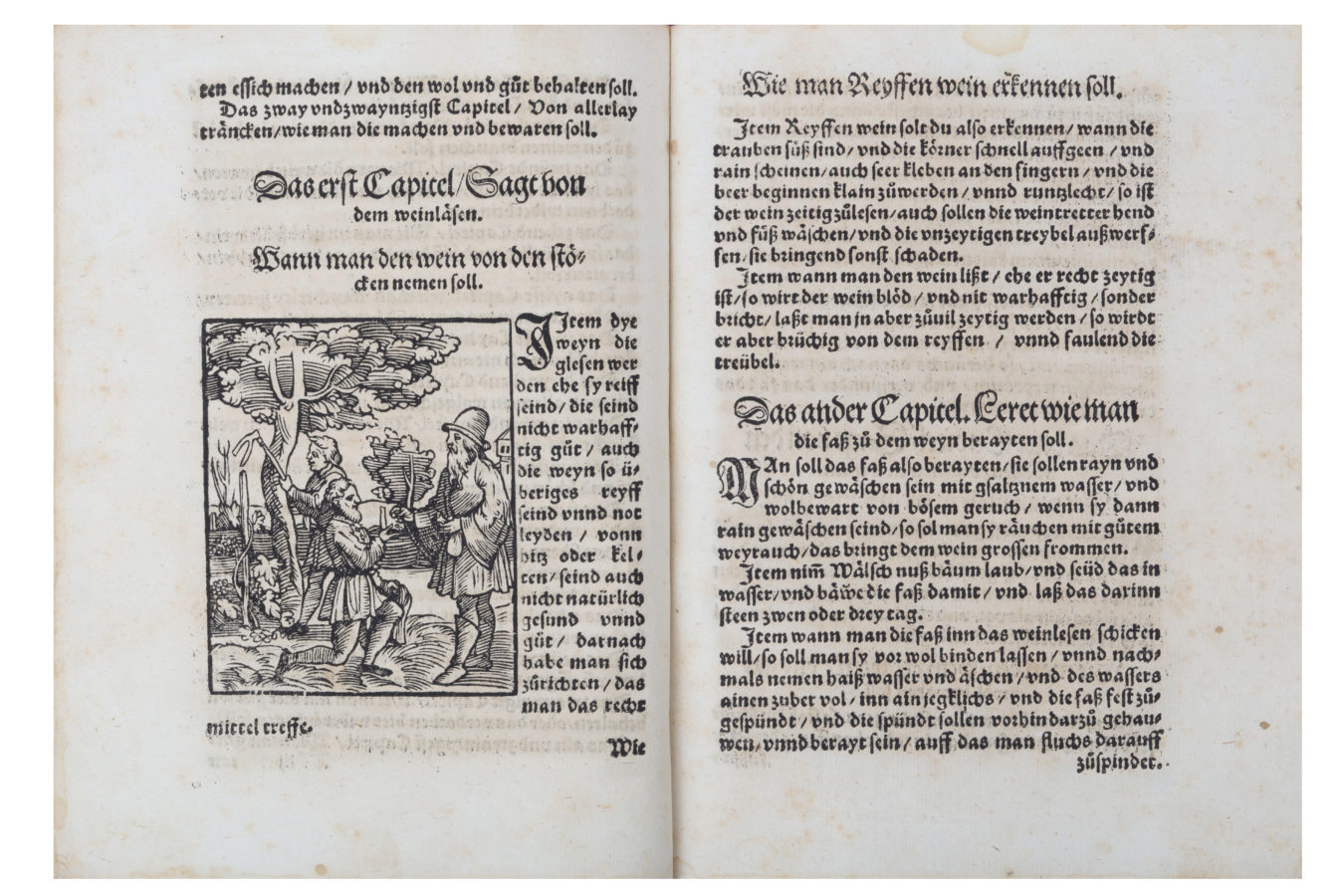 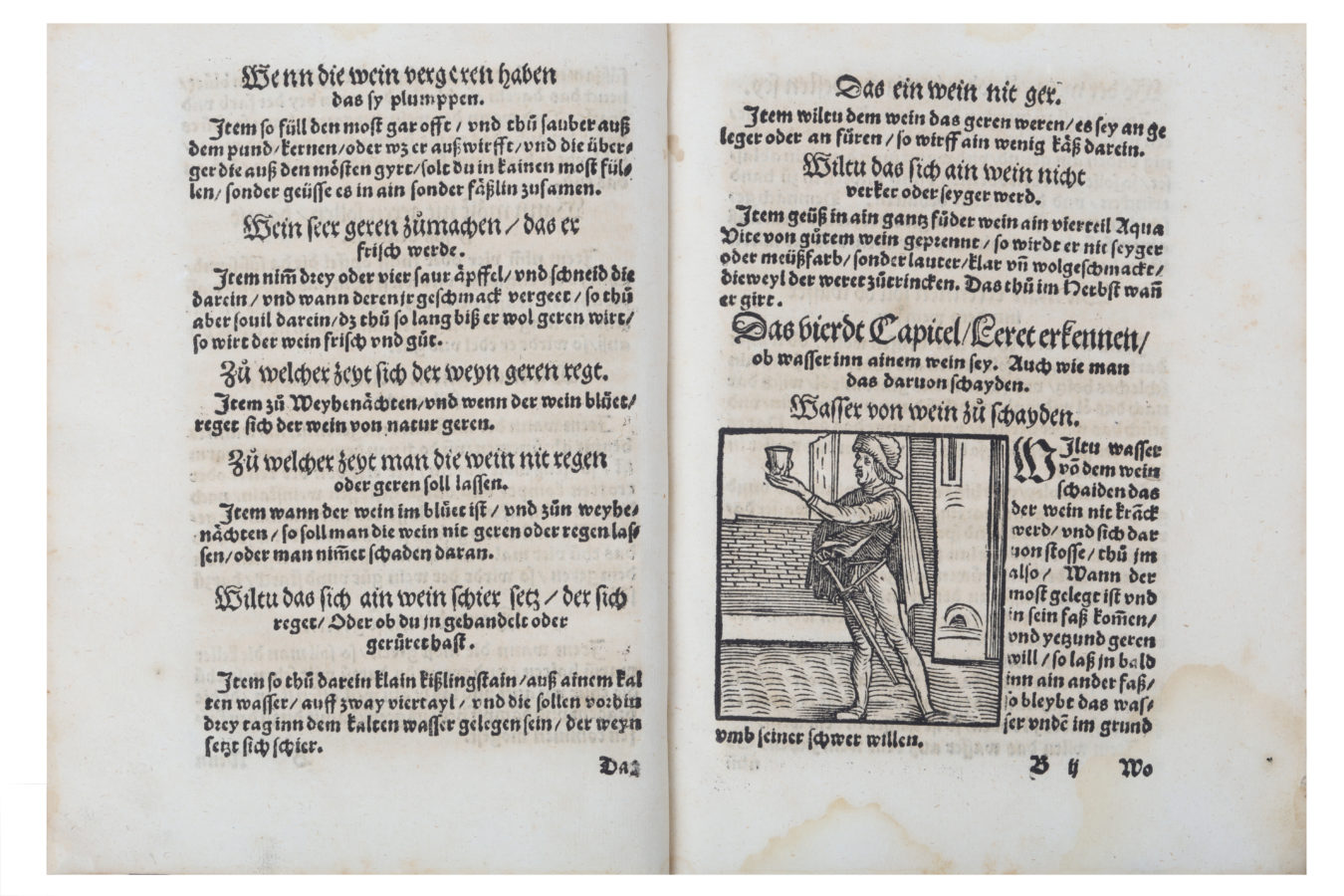 The book is an anonymous treatise on the production, storage and improvement of wines and other beverages, such as beer, vinegar, mead, wormwood, and brandies. The work was reprinted eleven times up to 1560, often bound together with ‘Kuchenmeysterey’, the first German cookbook, known as ‘Psesudo-Plantina’. The beautiful woodcuts by Hans Schaufelein, one of Albrecht Dürer's most gifted pupils, show the winemaker at his duties. The illustrations were originally planned for the Heinrich Steiner’s edition of the ‘Liber Ruralium Commodorum’ by Petrus de Crescentiis, but this work was never printed (see Campbell Dogson, ‘Schäufelein als Illustrator der Kellermaisterey’, in ‘Das Schwäbische Museum’, Augsburg 1928, S. 111f.).Very few copies of this and other editions are recorded in world libraries. All issues are now of the utmost rarity.

This book includes 3 lovely images, one of 3 men harvesting grapes from a trellised vine, a man looking at a glass of wine fresh from barrel, perhaps checking for clarity, and a man in a wine cellar.  He is surrounded by the tools and standing next to one cask holding a rod that goes into the bung hole. Similar to early books on preparation and preservation of wine, it includes useful alchemical and chemical information including the first clear reference to sulphur dioxide use in wine production. The publication recommends that 3 wood splinters, covered with powdered sulphur be burnt in casks and then sealed. 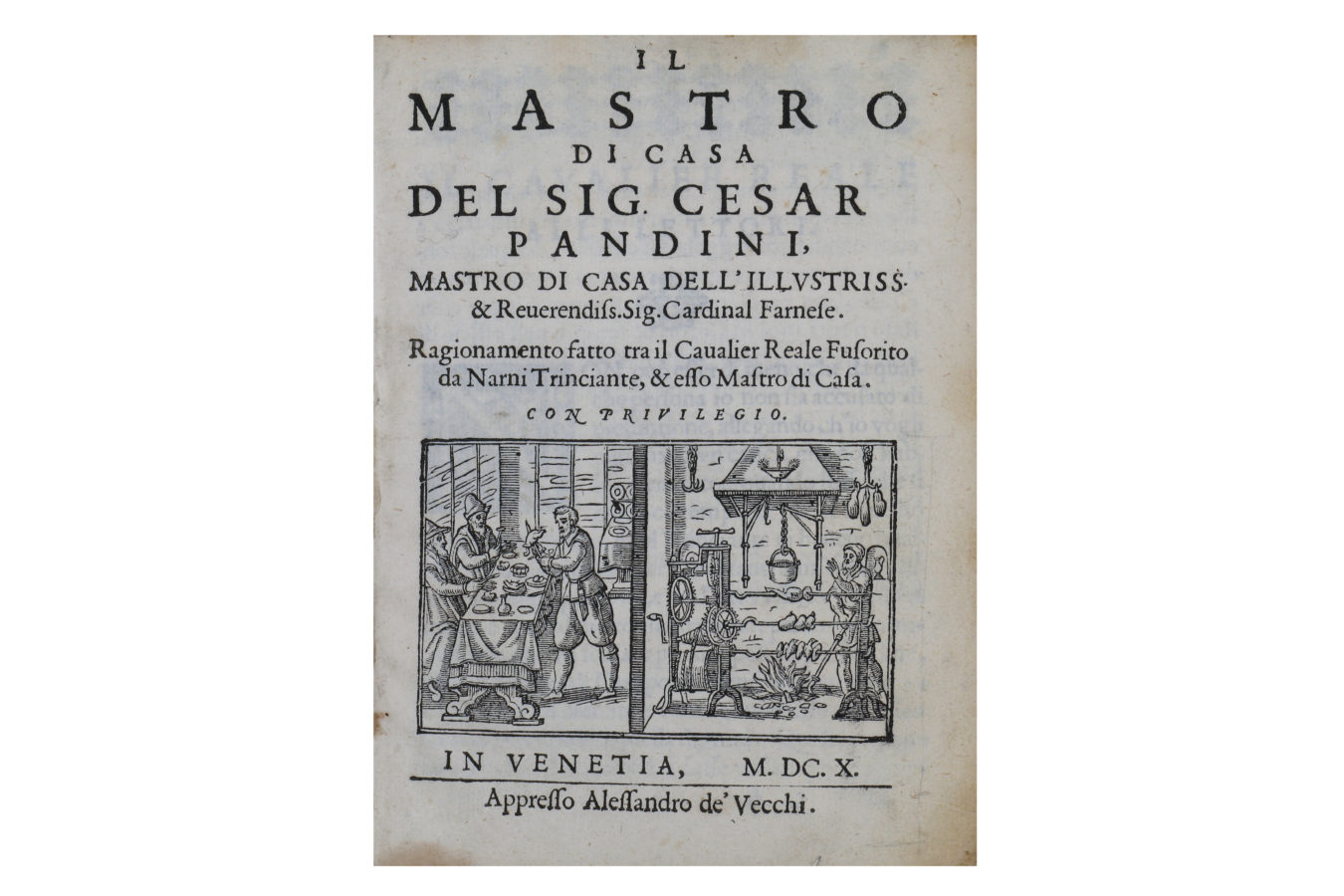 The ‘Mastro di casa’ first appeared in Vincenzo Cervio’s carving manual ‘Il Trinciante’ (1593), and then as an appendix to the later editions of Bartolomeo Scappi’s gastronomic work (Venice 1605, 1610, 1622, 1643). The title page shows 2 large woodcut vignettes depicting a dining room and various fowls and meat cooking with turnspits in a kitchen.

Bartolomeo Scappi (c. 1500-1577) was the Renaissance’s most innovative chef, who revolutionised the culinary arts. He oversaw the preparation of meals for several Cardinals and became the personal cook for two Popes. He compiled the largest cookery treatise of the period to instruct an apprentice on the full craft of fine cuisine. Scappi's work presents more than one thousand recipes (particularly for pastry and pasta, such as tortellini, tagliatelle, struffoli, ravioli and pizza), lists 241 varieties of cheeses, and includes a fascinating account of a pope's funeral and the complex procedures for feeding the cardinals during the ensuing conclave. This material is surely one of the reasons for the commercial success of the work. 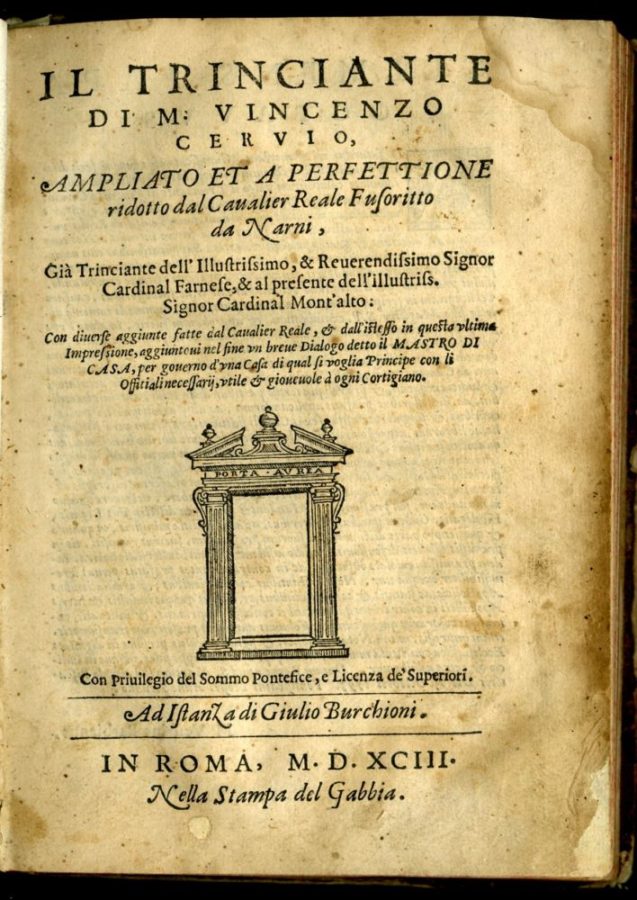 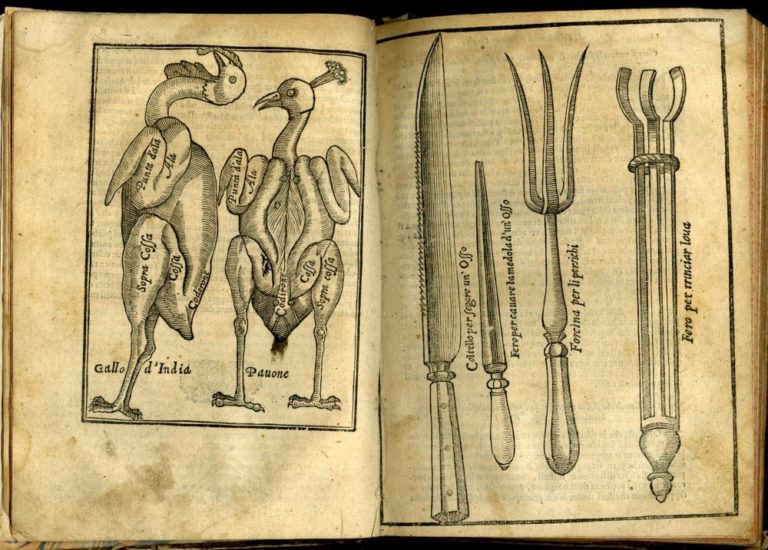 
‘Il Trinciante’ is the first treaty devoted entirely to the art of chop and cut the meat, and is accompanied by illustrations that depict the various instruments

Vincenzo Cervio and his pupil Reale Fusoritto were carvers (‘trincianti’) at the service of Cardinal Alessandro Farnese. The ‘Mastro di casa’, written in the form of a dialogue, describes the figure of the chief manservant of the house, his skills and tasks. It also contains (pp. 18ff) interesting notes on the role of the house cook, with reference to his qualities, the relationship with the suppliers (baker, butcher, fisherman, wine seller, etc.), as well as the choice of ingredients for the preparation of the meals.

The items offered in the forthcoming Rare Books & Works on Paper sale present a rare opportunity to own a part of culinary history.

Rare Books & Works on Paper, Wednesday 29th May at 2pm